This section continues in the Subscriber's Area. Back to top
May 08 2017

Hedge funds and other speculators increased their short positions in the Canadian dollar to the highest level on record, according to data from the Commodity Futures Trading Commission. The loonie, which is the worst-performing major currency this year, has been under pressure in recent weeks amid concerns over a potential trade war with the U.S., a plunge in crude oil and financial woes of alternative mortgage lender Home Capital Group Inc.

The Canadian Dollar skirted the worst effects of the credit crisis by virtue of having a strongly regulated banking sector when just about everywhere else in the G7 had given into the worst excesses to deregulation. The rebound in oil allowed the Loonie to retest its 2008 peak in 2011 but the subsequent decline in commodity prices has taken its toll.

This section continues in the Subscriber's Area. Back to top
March 25 2015

The facilities will be replaced by four gas-fired stations with capacity to supply 2.6 times more electricity than the coal plants.

The closures are part of a broader trend in China, which is the world’s biggest carbon emitter. Facing pressure at home and abroad, policy makers are racing to address the environmental damage seen as a byproduct of breakneck economic growth. Beijing plans to cut annual coal consumption by 13 million metric tons by 2017 from the 2012 level in a bid to slash the concentration of pollutants.

Nationally, China planned to close more than 2,000 smaller coal mines from 2013 to the end of this year, Song Yuanming, vice chief of the State Administration of Coal Mine Safety, said at a news conference in July.

I’ll be stopping off in Beijing on my way to Singapore next week and I’m looking forward to seeing first-hand what measures, if any,  have been taken to tackle the pollution problem. Replacing coal fired power stations with natural gas plants is a hugely positive development which is likely to have some far reaching repercussions.

This section continues in the Subscriber's Area. Back to top
July 03 2014

In its most recent 5-Year Plan (2011-15), the Chinese government laid out an aggressive time table for development of its coal-to-olefins (CTO), coal-to syngas (CTG) and methanol-to-olefins (MTO) industries (Appendix 1-3).

The economics of China coal-to-olefins (ethylene / propylene) is competitive relative to the world’s naphtha-to-olefins industry (Figure 2, Figure 20 & Figure 92-93). The world’s naphtha-to-olefins industry is Asia-based. Ninety percent (90%) of Asia’s olefin (ethylene) capacity uses naphtha as a feedstock (Appendix 6-10). Asia produces 34% of global ethylene. A fast-growing China CTO industry would displace its own naphtha to olefins industry (24% of global ethylene capacity). Somehow, this strategy does not make much sense; although it would produce short-term China GDP growth.

The economics of China coal-to-olefins however is not competitive relative to a growing North American and Middle Eastern natural gas-to-olefins industry (Figure 2, Figure 20, and Figure 94). From a cost perspective, a fast-growing China CTO industry would displace its own naphtha to olefins industry but then be displaced itself by a lower-cost North American and Middle Eastern natural gas-to-olefins industry. Somehow, this strategy makes even less sense; except for the fact that it creates plenty of China GDP by both building and then dismantling multiple China industry chains.

China’s coal-to-olefins and / or coal-to-urea do not make economic sense in a world awash in low-cost natural gas. Notwithstanding, China continues to grow its coal-to industries; maybe on the prospect that the world’s growing supplies of cheap natural gas could be short-lived.

The production of olefins from coal requires an abundance of water (Figure 98) and produces an abundance of CO2 emissions (Figure 102). The addition of one 600k tpa CTO facility in Beijing would increase provincial CO2 emissions by 14%. China’s abundant water resource (Figure 95) is located in the South and South West part of the country; its coal resources are located in the North and North West part of the country (Figure 11-12) – bad luck.

China has a substantial coal sector which, in common with the global sector, has been under pressure from below trend global growth, increasingly stringent environment regulations and competition from lower cost alternatives (at least in some jurisdictions) such as natural gas. The green light for investment in coal to liquids development appears to be an attempt from some portions of the administration to provide the coal sector with an additional business line in order to preserve its viability.

Quite how viable that is when water and environmental concerns have not been addressed and when the country is also investing heavily in developing its own natural gas reserves raises some important questions about whether this will in fact pan out.

This section continues in the Subscriber's Area. Back to top
June 20 2014

By investing in the Hong Kong market, Chinese investors can not only buy cheaper stocks offered by the same company (for most companies cross-listed between Shanghai and Hong Kong, the H-shares trade at a discount), but also invest in overseas companies that cater to Asian investors and are listed in Hong Kong.

With the direct investment channel between Hong Kong and Shanghai, Chinese investors can use their existing accounts to invest in overseas companies. Such convenience and familiarity will no doubt boost Chinese investors' confidence in investing overseas, which not only helps their portfolio performance but also propels more Chinese capital into the international financial arena.

Speculation that the A-H Share spread would disappear due to changes in Chinese regulations sent the Hang Seng to an accelerated peak of 32,000 in 2007. When this speculation came to naught, the Index pulled back sharply before collapsing during the credit crisis. By contrast news that the Chinese are prepared to allow domestic investors relatively unfettered access to the Hong Kong market within the next six months has on this occasion been met with little fanfare. 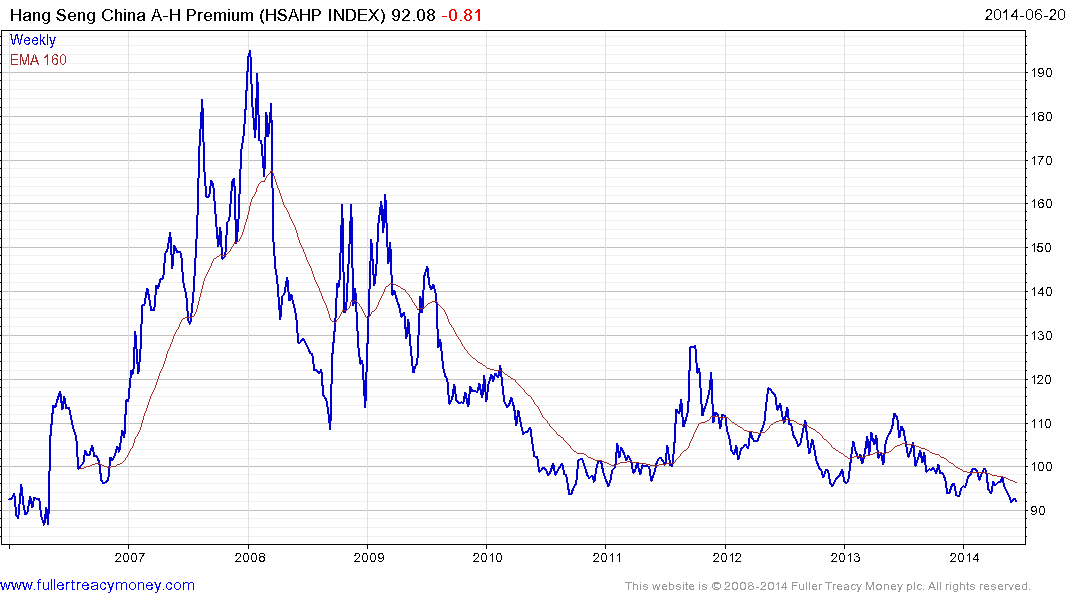 Of course the stock market situation is totally different today. In 2007, the A-Share market was surging ahead and investors were speculating that the Hang Seng would participate in a major catch-up move. Today investors need a lot of convincing to consider China particularly when other markets are doing a lot better. The A-H Share premium has fallen to its lowest level since 2006 and may have disappeared altogether by the time the regulatory change comes into being. Whereas in 2007 the Chinese were worried about an overheating stock market, today they are eager to continue to attract investment. Therefore the potential of them following through to allow greater access to their domestic market is probably greater today than it was in 2007.

This section continues in the Subscriber's Area. Back to top
December 27 2013

More than 150 additional Chinese and Hong Kong listed shares were added to the Chart Library over the holiday. I clicked through the list today using the View All Charts function in the International Equity Library and a number are worthy of comment.

This section continues in the Subscriber's Area. Back to top