Eoin, the reflation trade seems to be well under way and you have repeatedly viewed commodities (both industrial and soft) to be an attractive investment for a lengthy period of time and at times, you have mentioned a possible investment vehicle. I suggest that you present those ETF/ETC and other funds/shares or a combination which you believe will best cover this area at the present time. I would think that many in the collective will appreciate getting such a list from you.

This also against the background that gold, PMs in general and PM miners seem to have to work off their overbought condition and for the time being, don't seem to be needed as safe havens as worldwide growth is picking up and neither inflation nor systemic risk are perceived as major issues at this time.

Therefore, in my view industrial and soft commodities should be the better investment compared to PMs for some time to come.

Dear Eoin, I hope you and the family are well. This "rotation" trade seems to have run quite far and I sense a general frothiness to markets, (apart from gold of course). Would, you go with the crowd here hoping for further gains? Or would you wait for a pull-back, (which today feels like it may never come) and maybe nibble at a few out of favour stocks/themes? Best wishes,

Interesting picking up on your views regarding soft commodities.  Some directly investable ideas seem hard to track down related to this theme in the UK market; really appreciate your suggestions as to how to invest in this and am sure others would be interested as well.

In general, the markets seem to be moving very rapidly at present, e.g. Royal Dutch, +5%, Glencore +5% etc, so your guidance about how best to play these trends that you are identifying is hugely helpful in your day to day notes and commentary.

It would be useful to have a list of ETFs to play a number of different themes: 1) COVID recovery candidates like airlines and hospitality, 2) value, 3) small caps, 4) general Asian exposure.

Thank you all for these questions which highlight the emotional difficulty of buying breakouts. When sectors and indices trade out to new highs there is always a temptation to think they may have already gone too far. The big question then is to gauge whether the animating factor behind the breakout has the potential to persist.

The market is currently reacting both to the willingness of President Trump to acknowledge a need to get the handover of power underway and that Janet Yellen is going to be the next Treasury secretary. The likelihood of a seamless transition of power and the continuation of the extraordinarily accommodative monetary and fiscal policy seems much more likely today than it did last week. The Yellen/Powell put is still in play. 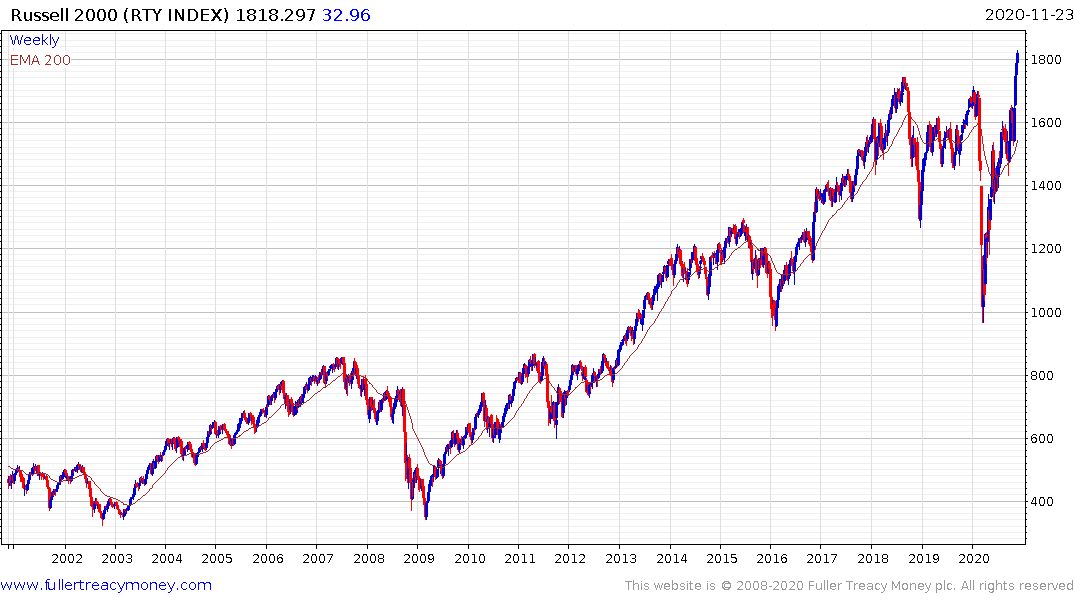 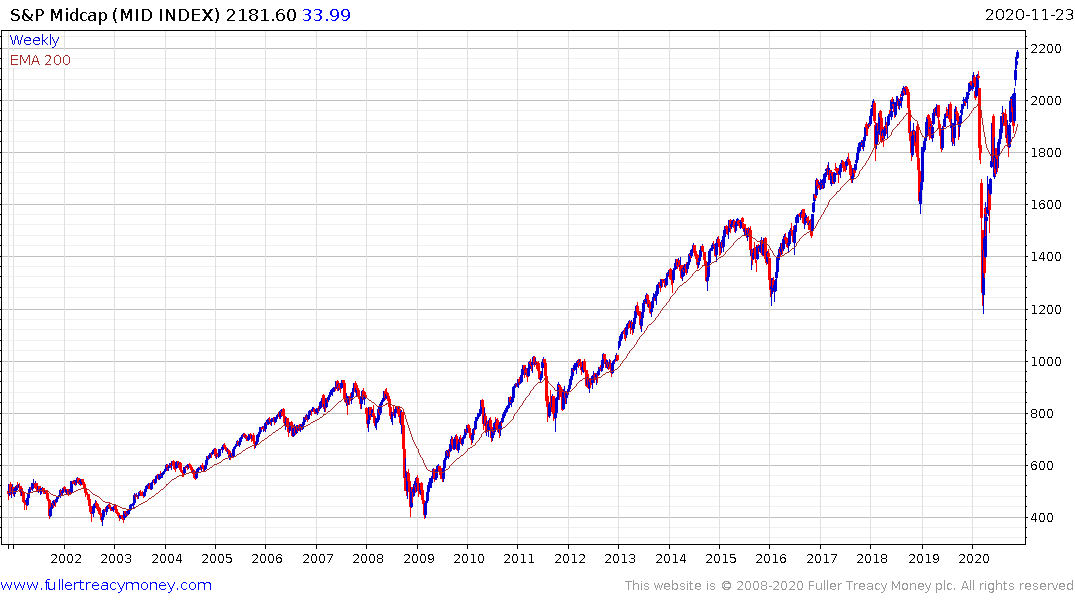 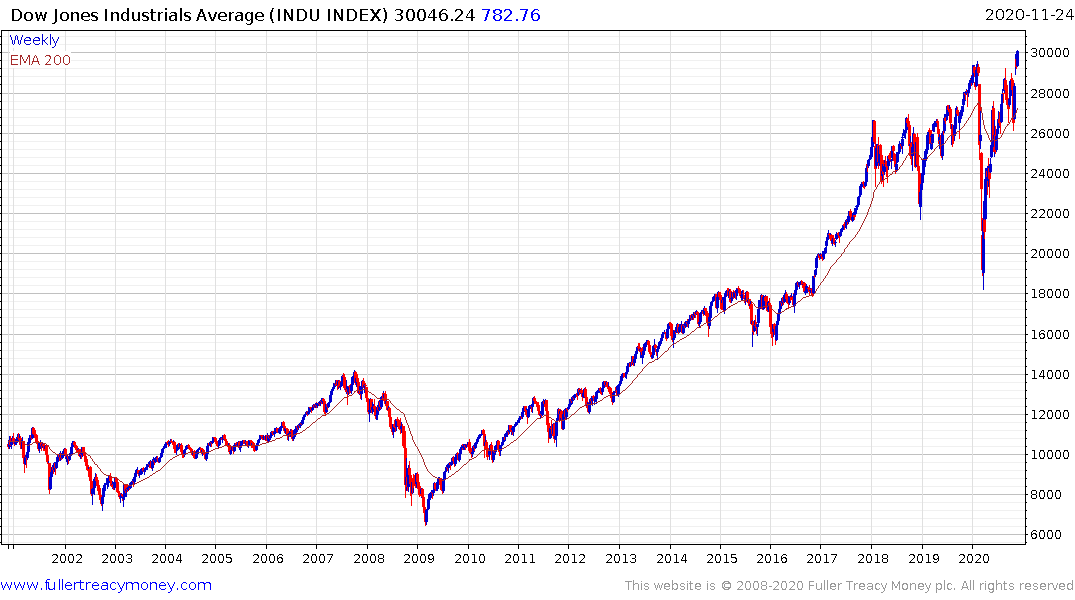 Small-caps, mid-caps and the Dow Jones Industrials Average have been ranging for almost three years. Those are sufficiently large bases to support higher prices. The determination of every government to fuel reflation is a multi-year theme so it is really only getting started. That suggests global growth candidates will be buys on dips for the foreseeable future. 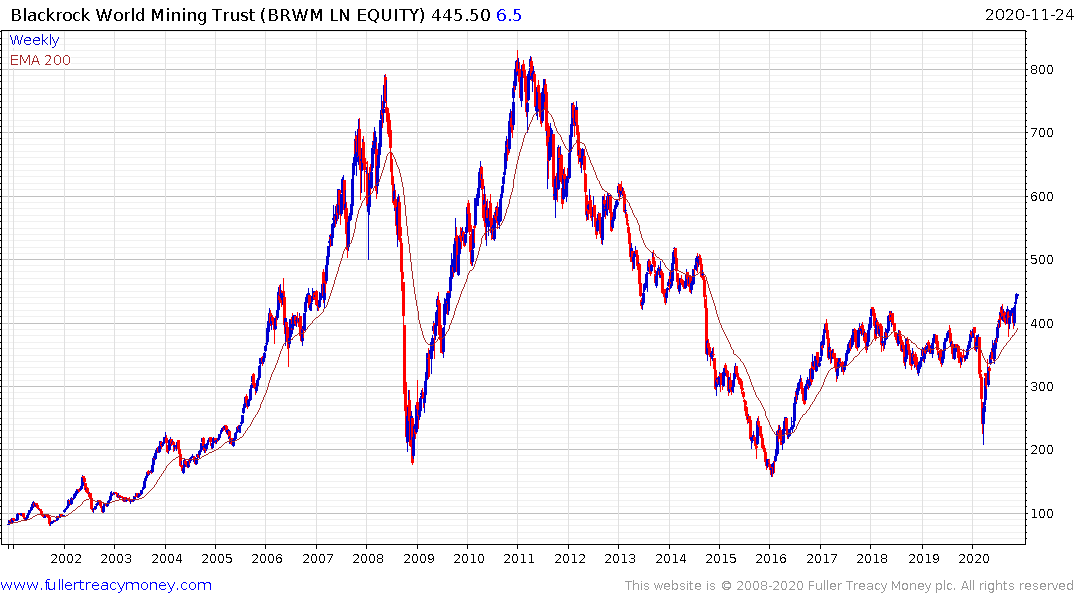 The Blackrock World Mining Trust is currently trading at a 5% discount. The trust ran into difficulty during the commodity crash because they were caught holding a very illiquid private holding an iron-ore explorer during the crash. It to be hoped they have learned their lesson. The trust is now outperforming the FTSE350 mining index and is pushing on to new recovery highs.

The iShares Global Clean Energy UCITS ETF focuses on hydrogen, solar, wind, utilities and transmission companies. This is a high growth sector which is heavily dependent on government support for an energy transition. It is also the most compelling demand growth drive for copper, aluminium, nickel and lithium given the global scale of the initiatives. 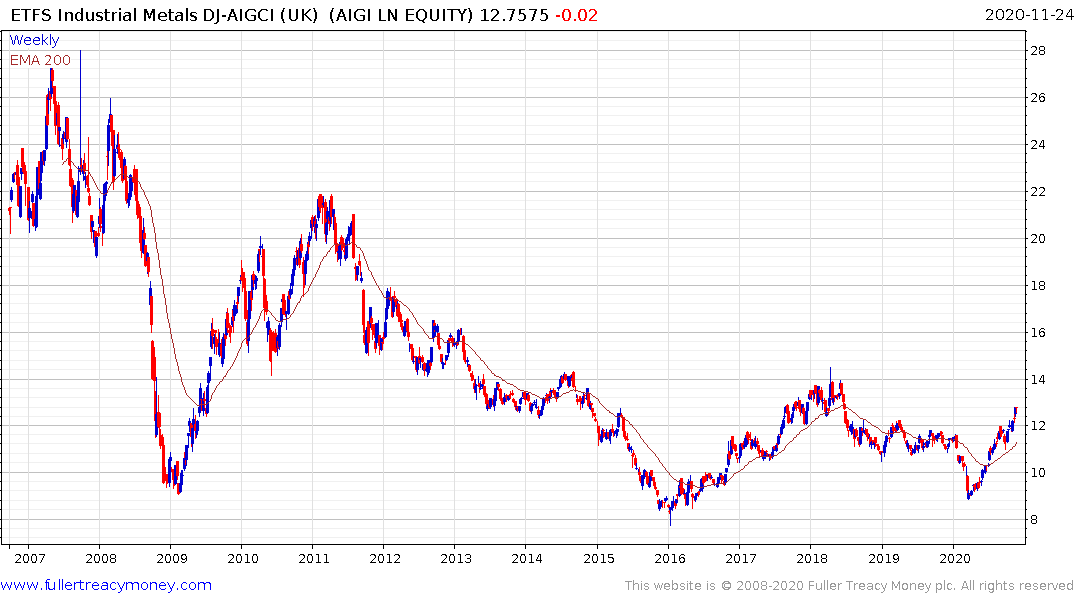 The WisdomTree Industrial Metals ETC holds industrials metals futures and therefore will suffer from contango costs in a downtrend. It is currently trading in a similar manner to the LME Metals Index 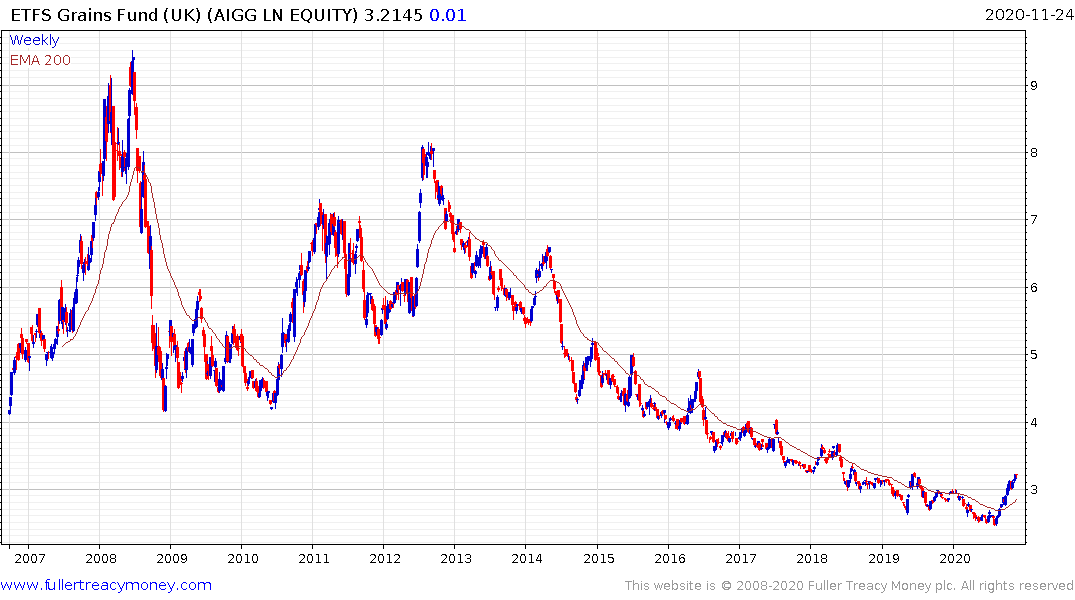 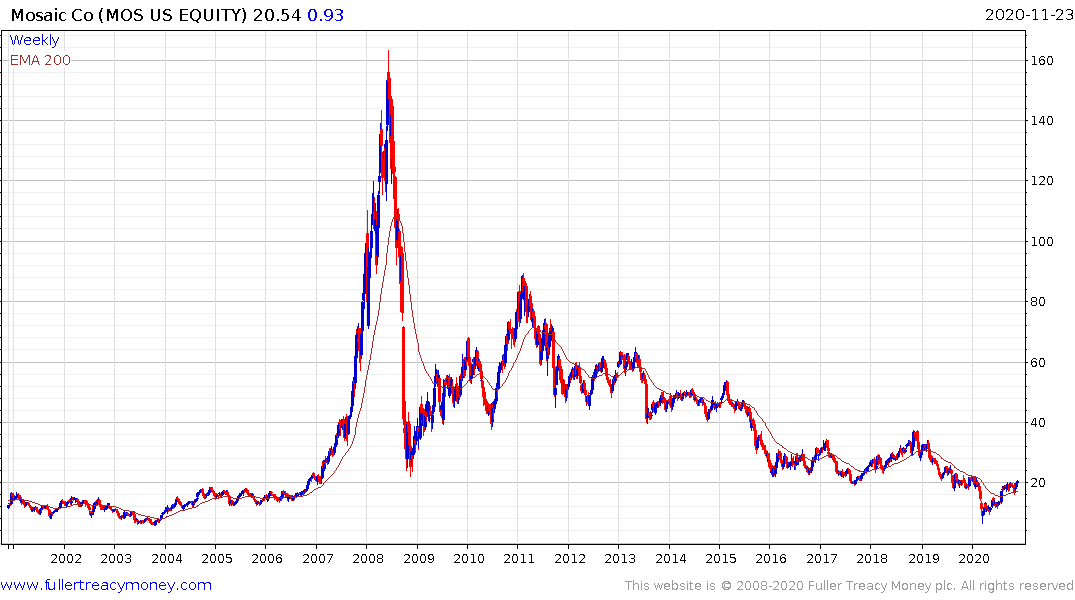 The WisdomTree Grains ETC also holds futures but has a very similar pattern to Mosaic, suggesting the latter is a proxy for the soft commodity markets. 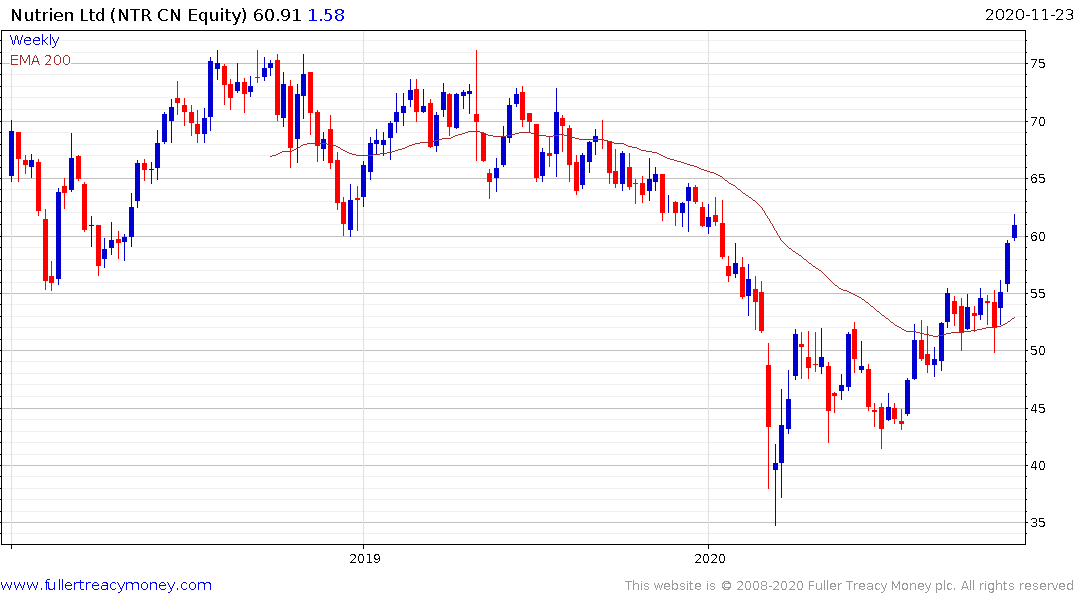 Nutrien, which was formed following the merger of Agrium with Potash Corp of Saskatchewan has also rallied to break its downtrend. 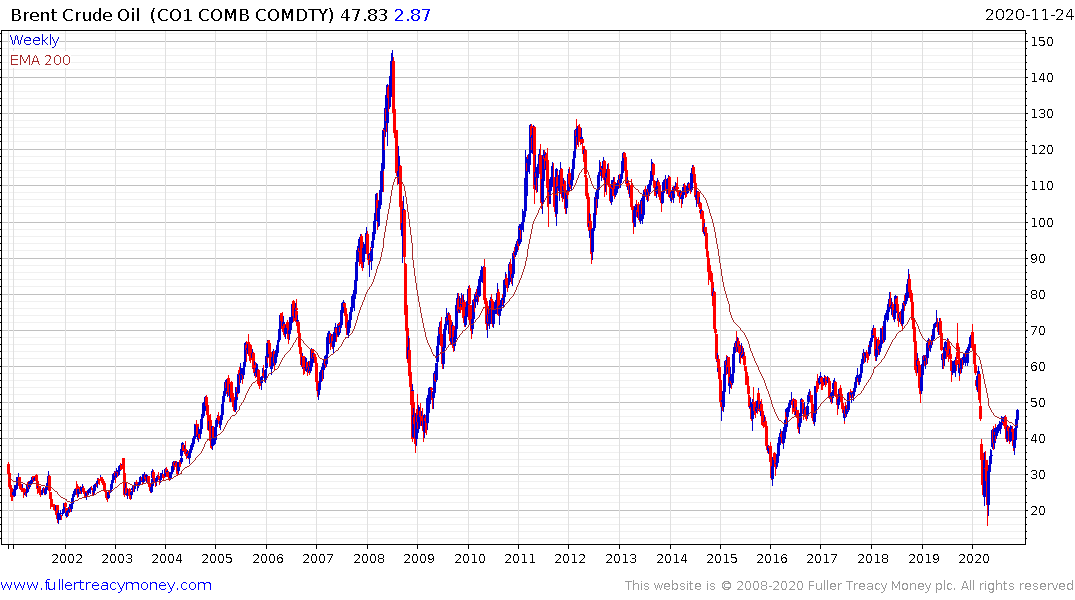 Brent Crude oil demand is likely to recover as lockdowns end next year. The price is already rallying ahead of a future supply response. The conventional energy sector is still close to record lows and yields are close to historic highs on both a relative and absolute basis. There is ample scope for a recovery in the oil majors and MLP sectors. 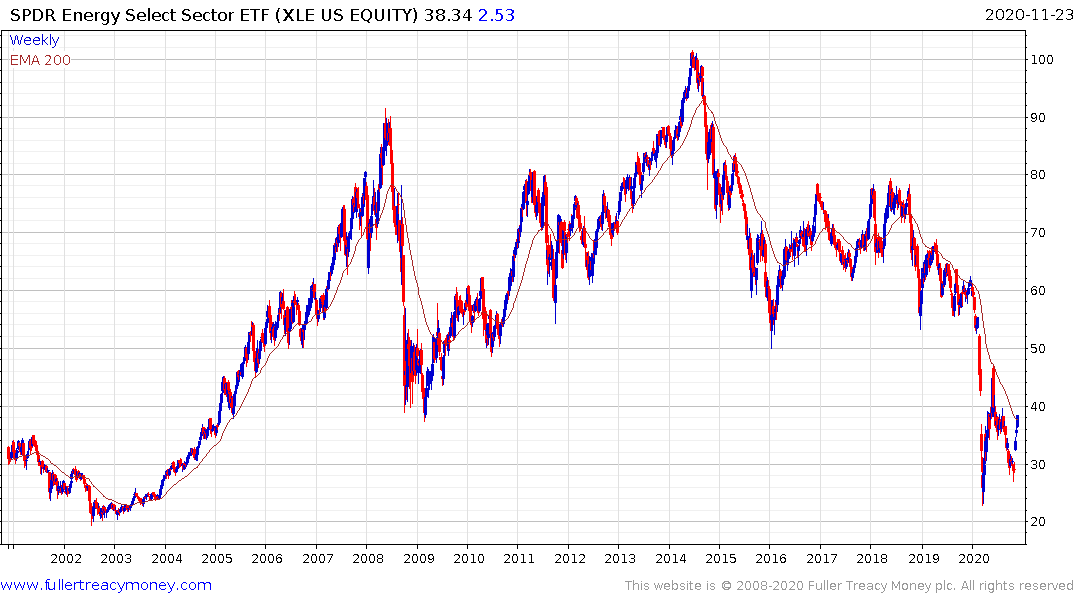 The Energy SPDR ETF (XLE) yields 5.4% and is rebounding from the region of its lows. 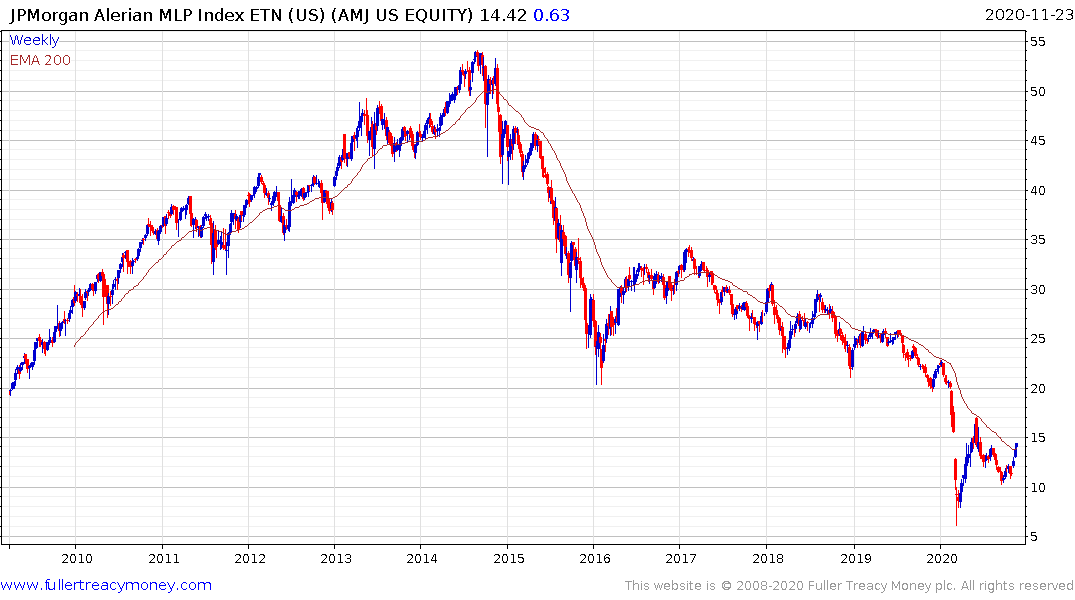 The Alerian MLP ETF yields 10.5% and has confirmed a higher reaction low as it rebounds from the $20. 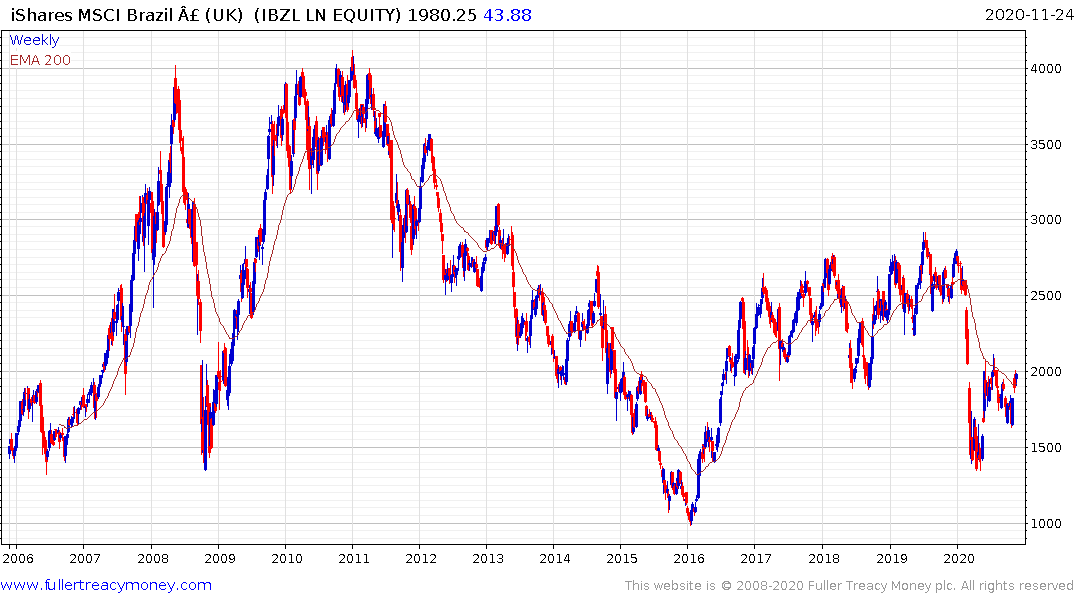 The Brazilian Real is one of the cheapest currencies in the world at present but it is also among the countries most acutely leveraged to rising commodity demand. The iShares MSCI Brazil ETF is trading back above its trend mean and testing the recovery highs near 2000p. 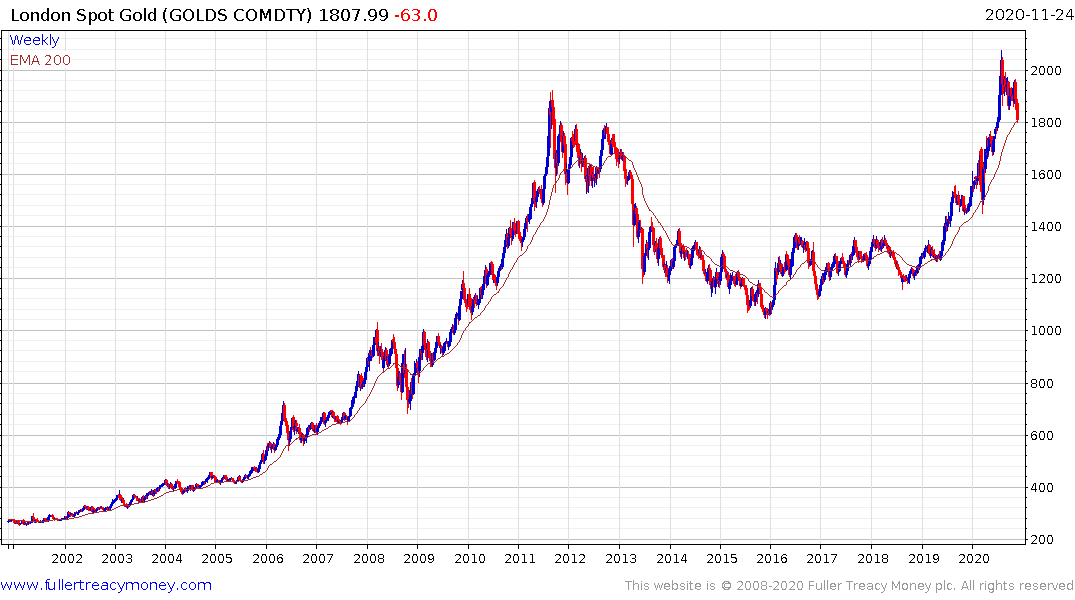 Gold is back testing the region of the trend mean and is suffering as global growth takes the drivers’ seat. However, it is only a matter of time before attention turns back to considering how deficts are going to be funded and what that means for the purchasing power of fiat currencies. 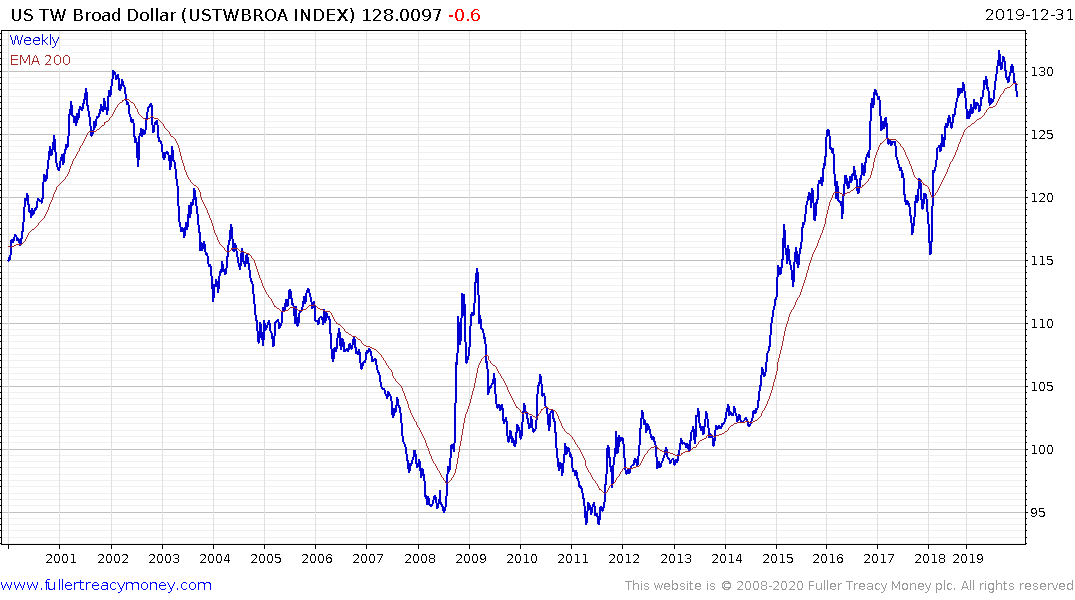 The Dollar’s decade long trend of outperformance is over. Surprises will be on the downside from here on out. Currency adjusted returns in hard assets and global growth plays are therefore where the easiest money is likely to be made. 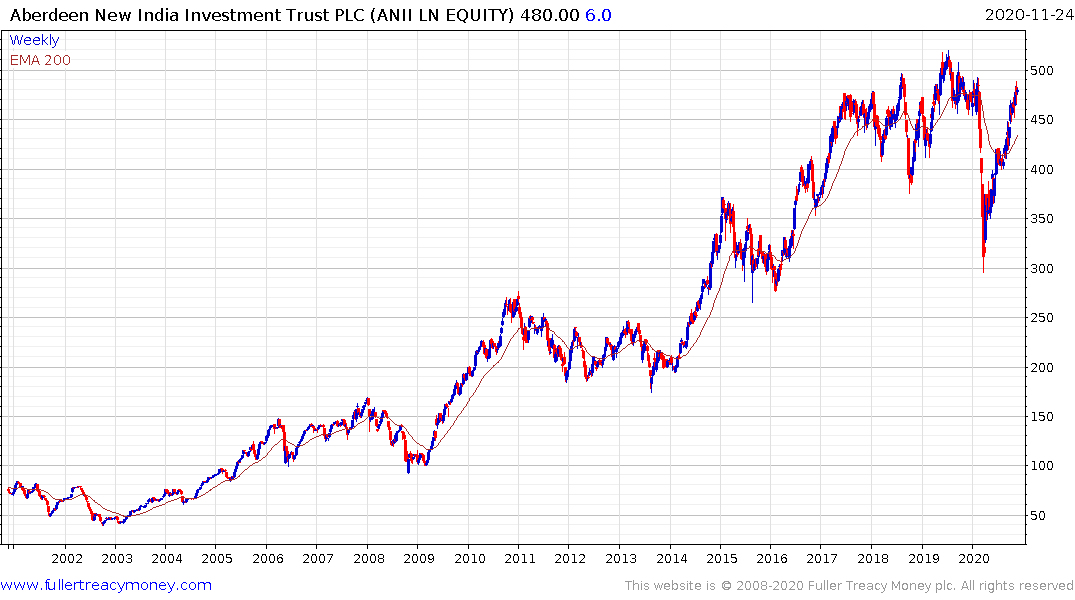 The Aberdeen New India Investment Trust trades at a 14.8% discount to NAV and has significantly outperformed the JPMorgan India Trust this year. It is now approaching the region of the peaks. 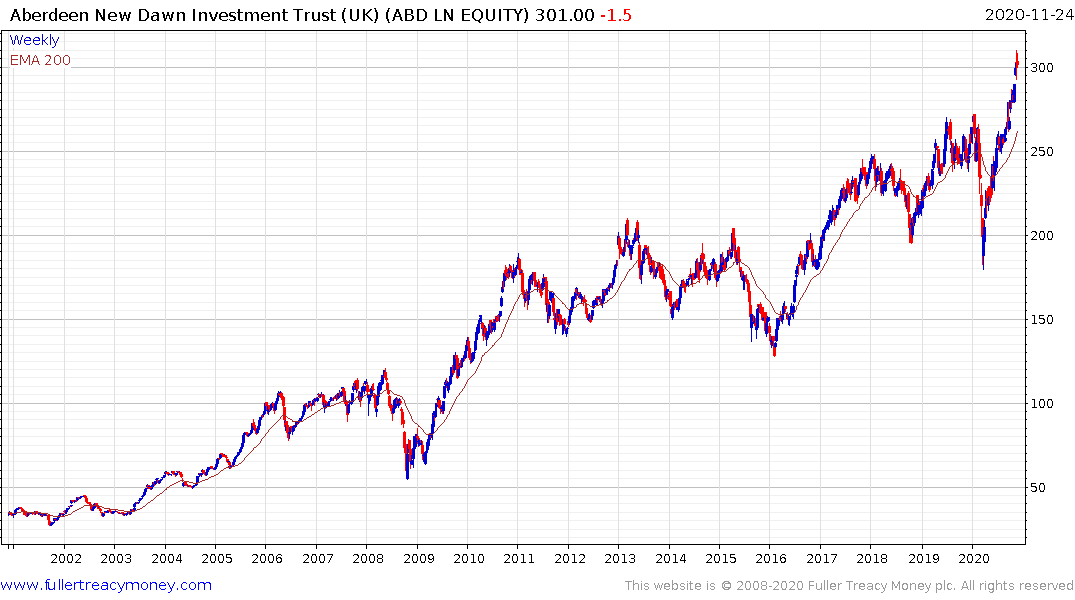 The Aberdeen New Dawn Trust trades at an 11% discount and is somewhat overbought in the short-term following an impressive breakout to new highs. 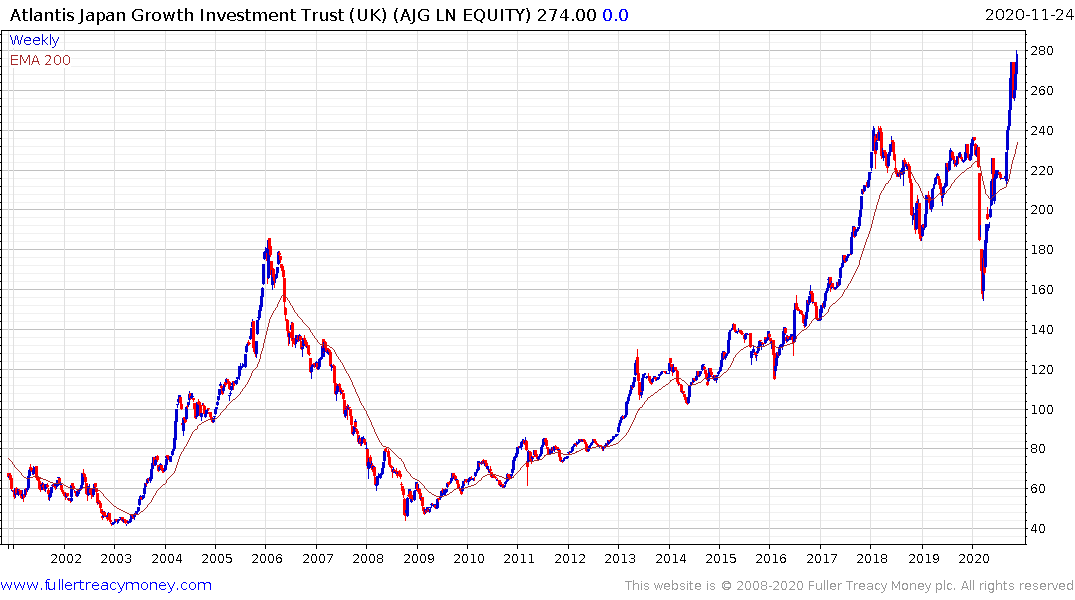 The Atlantis Japan Growth Fund trades a 10% discount and has broken out in line with the Nikkei over the last month. 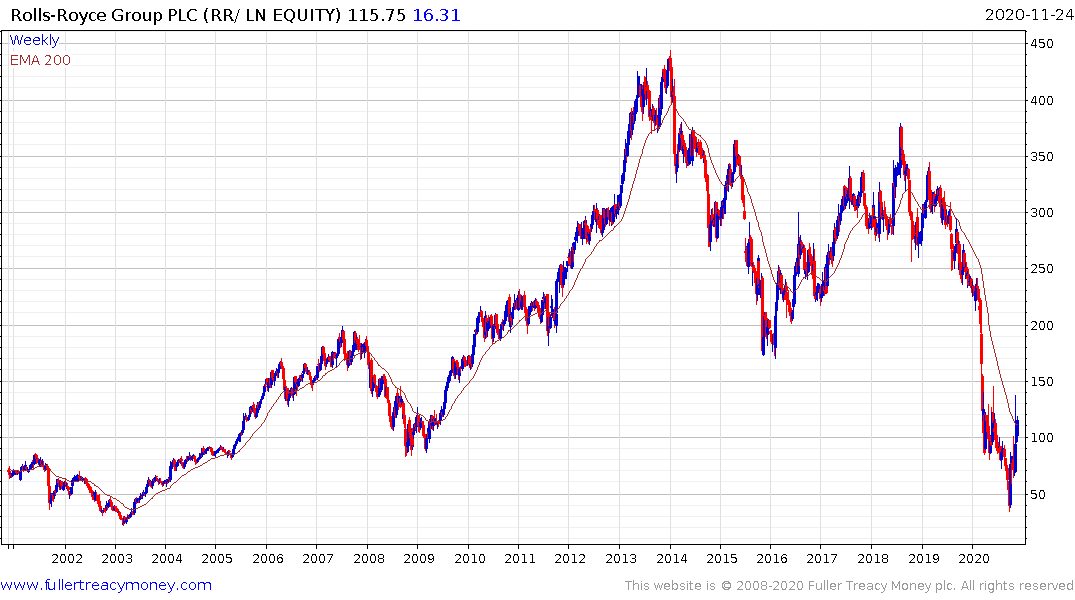 As we look towards opening up companies like airlines, travel and leisure companies should recover. My rationale for buying Rolls Royce was to leverage miles flown because of the company’s service contracts. 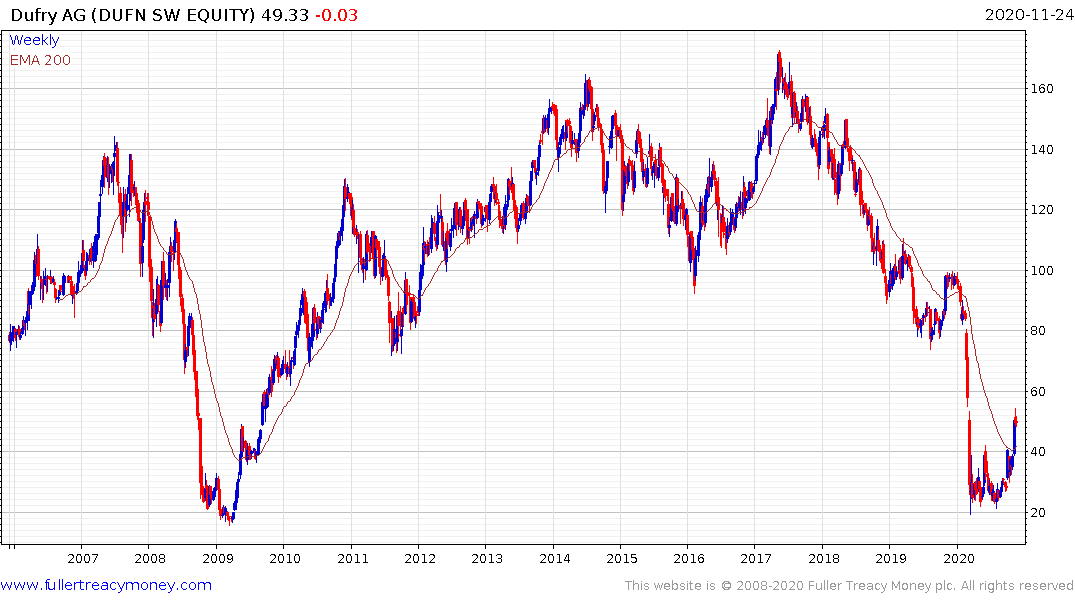 Dufry’s network of duty-free stores is a play on airport traffic numbers. It's recent partnership with Alibaba has been a bullish catalyst.

The Invesco Dynamic Leisure and Entertainment (PEJ) is a reasonable proxy for the wider sector. 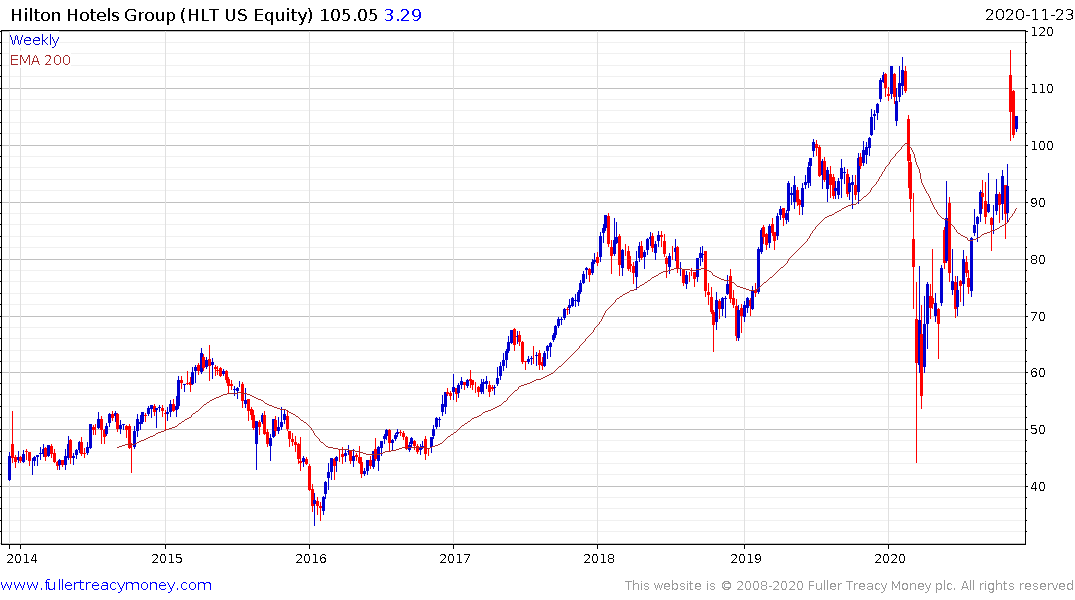 Hilton is leading Marriott higher probably because it is carrying less debt.