Regardless of whether one agrees or disagrees with the merits of road building it is incontrovertible that plans for a Pan American Highway began in early 1920s while Pan African roadways are still a long way from being complete. That alone helps to exemplify how underdeveloped infrastructure and intragovernmental cooperation is on the continent.

Africa has long been plagued by hunger, disease, lack of infrastructure, absence of governance and inability to access capital. Corruption and cronyism are also major considerations. Reliance on commodity exports has contributed to boom and bust cycles in a considerable number of countries. If major busts, as a result of the current bear market, are to be avoided then governance is going to have to rise to meet the challenge presented.

Technological innovation and increasingly easy access to those products and services has the potential to have a transformative effect on many African economies. On more than one occasion I have remarked on how I have always been impressed by the number of African traders I’ve met at wholesale markets in China. The only reason they are in China is to source goods to supply a nascent consumer economy at home.

Latin America is still highly dependent on commodities and it will be a long time before Africa can balance its reliance with internal demand. However the fact that so many countries have the potential to skip major stops in infrastructure development by employing the most innovative agricultural, energy, telecommunications, banking and healthcare solutions now suggests the outlook might be more encouraging than it has been previously. Development will of course be subject to improving governance and this will require monitoring. 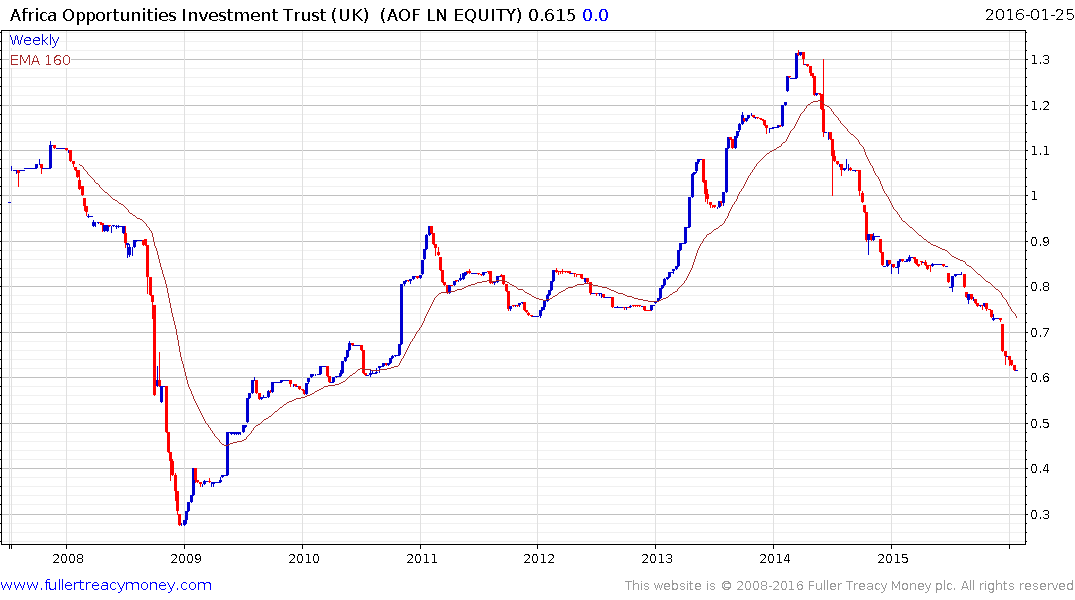 The UK listed African Opportunity Fund traded at a premium of 11% to NAV at its 2014 peak but has since declined steadily, not least because of the negative effect of El Nino on Zambian rainfall which is impacting its utilities and wider economy. The fund is currently trading at a discount of 23% but hit a record discount of 46% in 2008. Meanwhile the dividend yield of over 4% appears reasonably secure. There is no evidence just yet that it has stopped declining but the first clear upward dynamic is likely to signal a reversionary rally.