What Really Drives White Metals Prices
Comment of the Day

Silver supply drivers
While overall silver stocks are high globally, over the last few years silver has experienced what is known as a “supply deficit,” as annual production has been less than the demand for the metal, gradually eating away at current stocks. What many investors may not realize is that only 25% of silver production is derived from silver mines; the rest—roughly 75%—is a byproduct of mining for other metals, most notably lead, zinc, copper, and gold. As of year-end 2015, as mining capital expenditures for these other metals has been scaled back in response to relatively low prices, silver production has correspondingly fallen.

Silver demand drivers
Although it may not be the first thing that comes to investors’ minds when they think of silver, industrial applications are a significant demand driver, accounting for more than half of the precious metal’s usage worldwide. Silver’s unique characteristics include its outstanding thermal and electrical conductivity, along with its ductility, malleability, optical reflectivity, and antibacterial properties. These features make the precious metal invaluable as an input in myriad industrial applications including electrical components, batteries, photovoltaics (solar panels), auto parts, pollution abatement technology, ethylene oxide (an important chemical precursor), as well as brazing alloys and solders.

Of the white metals, silver also tracks gold most closely, boasting a correlation of 0.8 over the past five years. Since gold is seen as a defensive asset in times of expanded bank balance sheets or quantitative easing programs by central banks, monetary policy tends to have a “shadow impact” on silver—far less so than gold, but still noticeable. Lastly, albeit accounting for just 20% of silver use worldwide, it’s worth noting that jewelry demand has held more or less stable over the past decade.

Looking forward
Deep capital expenditures cuts in the industrial metals space is likely to have a significant effect on silver supplies, as the majority of silver is mined as a byproduct of zinc and copper. In the context of weakening global demand, especially from China, low commodity prices have reduced production incentives. Looking forward, as the global growth outlook improves, demand for commodities, including silver, is likely to rise.

If “the cure for high prices is high prices” is one of the oldest adages in the commodity markets then it also works in reverse. Industrial metal prices trended lower for four years and the LME Metals Index more than halved in the process. That forced miners to cut back on spending, cancel expansion plans, hold off on acquisitions, fire workers, especially administrative staff, and become much more conservative with their expectations for growth.

The rally in oil prices from early this year acted as a catalyst for a bounce in metal prices. Part of the reason is because with oil prices rallying investor focus returned to the wider commodity sector. However a potentially more important factor is energy represents a major cost centre for mining operations. The bounce in prices may have removed the final obstacle to marginal supply being withdrawn from the market.

That has allowed prices for industrial resources to rally and those with monetary attributes, particularly silver, have benefitted most. With more than half of all sovereign bonds trading at negative yields and considerable compression in Gilt and Treasury yields over the last couple of weeks, the relative attraction of precious metals has been burnished. 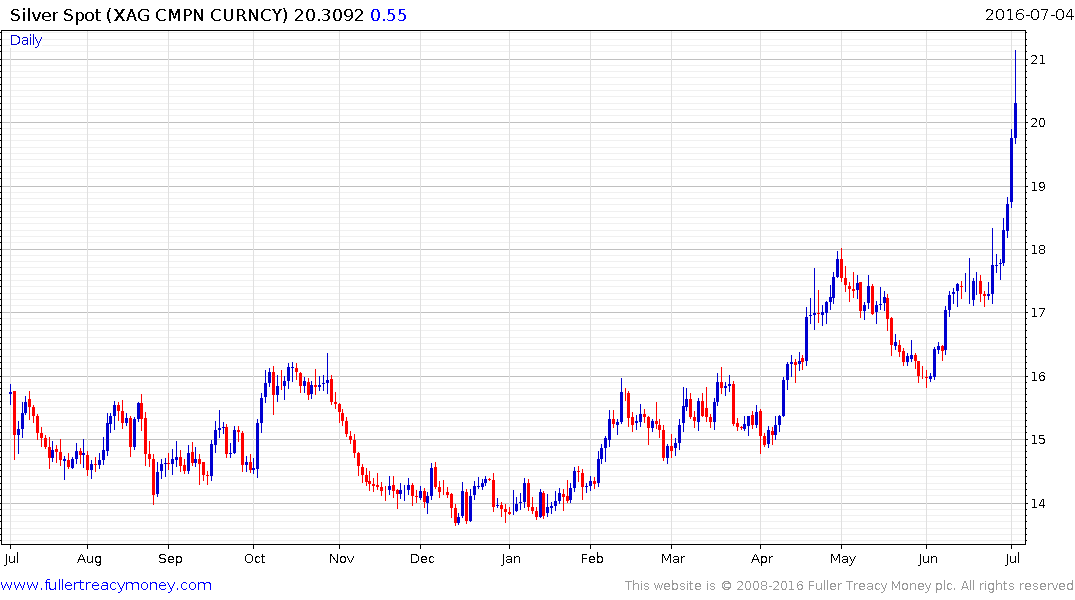 Silver surged to an intraday high today close to $21 but closed out the day below $20. A $4 rally since June 24th highlights the fact silver has been the subject of significant investor interest. Nevertheless, a short-term overbought condition is evident so at least a pause and consolidation is looking increasing likely. 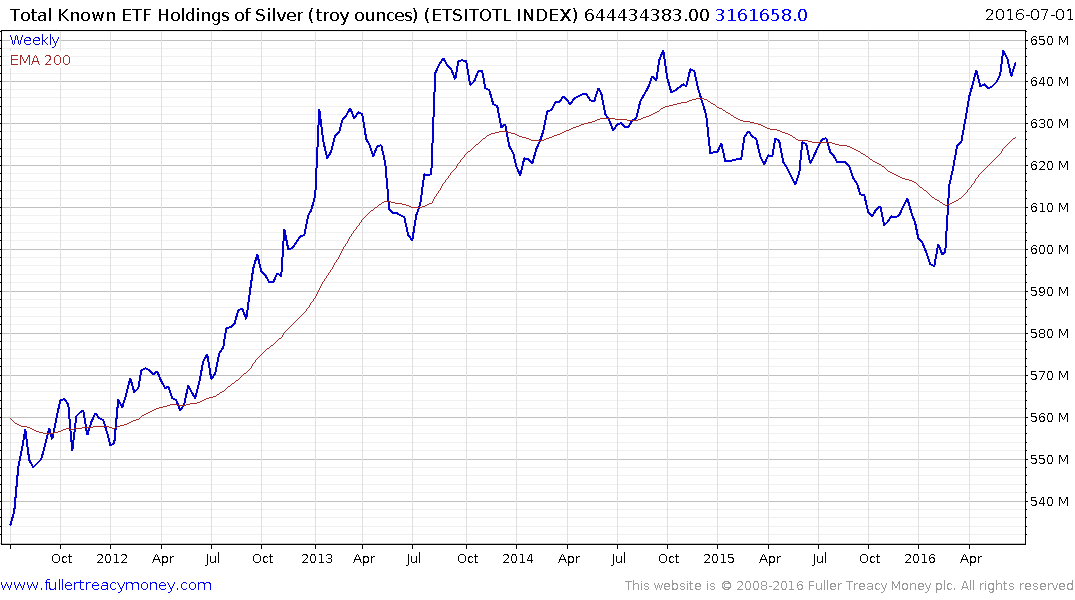 ETF Holdings of silver are currently testing the region of the 2013/14 peaks which highlights the fact that investors’ appetite for silver persisted well beyond the peak in nominal prices. 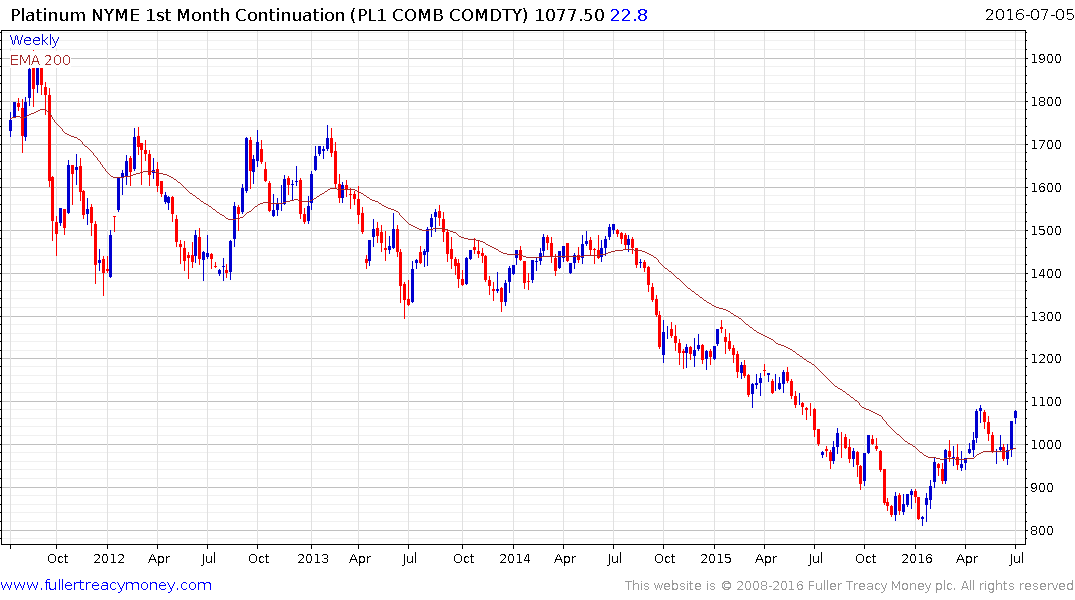 Platinum has first step above the Type-2 bottom characteristics but is also somewhat overbought as it approaches the March peak near $1100. 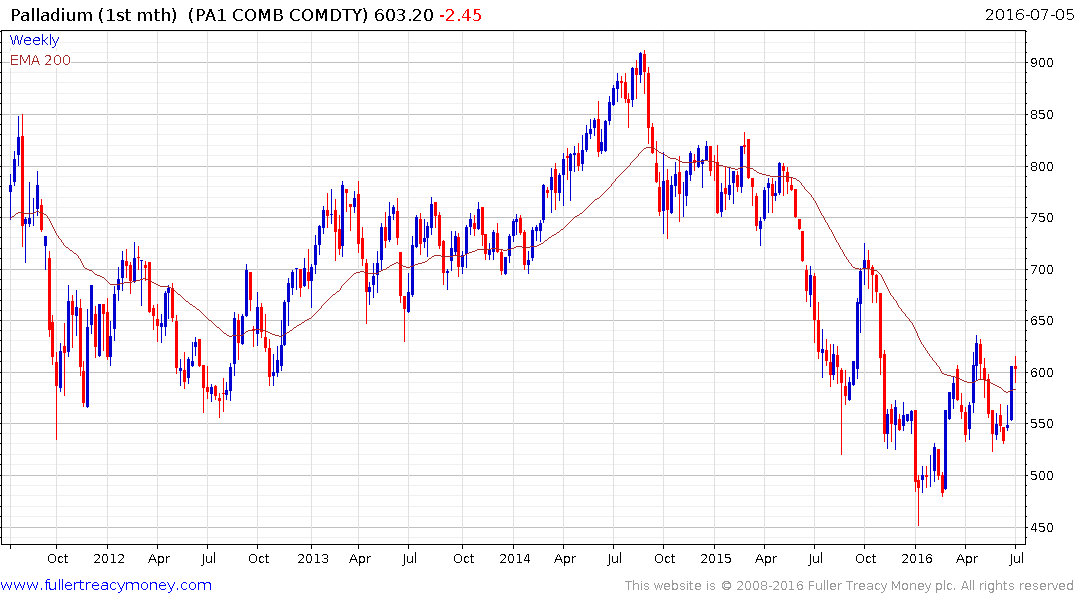 Palladium has been a relative laggard and continues to range in the region of the trend mean. A sustained move above $625 will be required to signal a return to demand dominance beyond the short term.

With the rally in oil prices having played such an important role in the bounce that has taken place in industrial resources, not least zine and tin, it is important to continue to watch oil markets for a clue to any loss of consistency because it is likely to a have an effect on sentiment towards commodities. 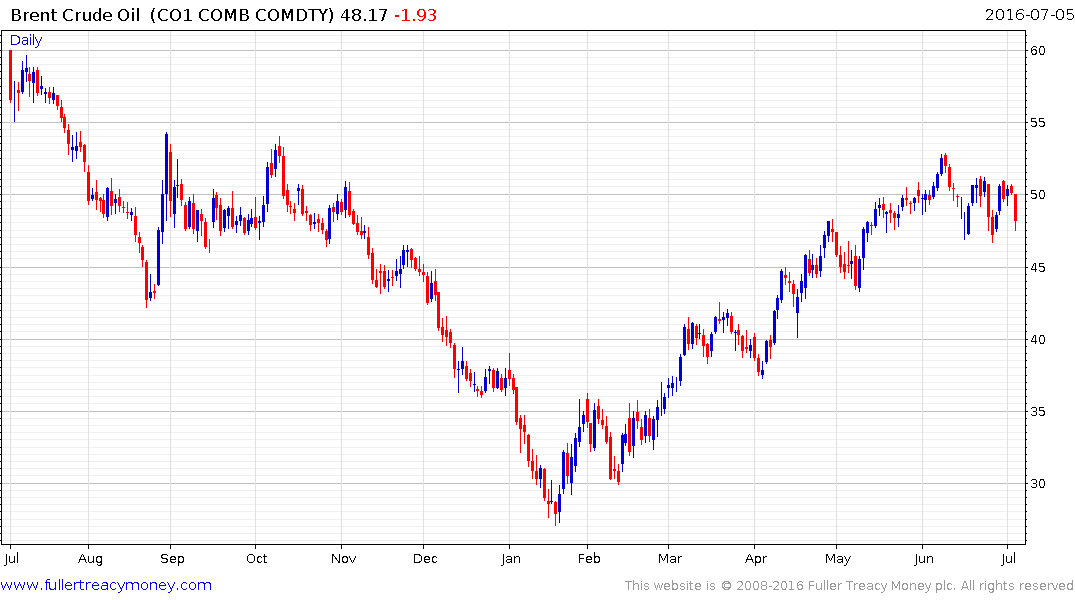 Brent Crude continues to hold a progression of higher reaction lows but will need to hold the $46 if that sequence is to remain intact.