Under May’s approach, shale gas royalties that would ordinarily go to governments and quasi-governmental agencies will instead be directed to the residents in the communities hosting the developments. The BBC estimates individual households will be receiving as much as £10,000 ($16,800) under May’s plan; other estimates arrive at higher sums – as much as £65,000 per household lucky enough to be near large shale gas deposits. May’s plan is now expected to wash away local opposition to fracking and unleash the development of Britain’s massive shale gas resources, estimated by the British Geological Survey at 1,300 trillion cubic feet of shale gas, equivalent to a 500-year supply at current gas consumption levels.

This torrent of energy will benefit more than the local residents who until now saw only drawbacks to shale gas development in their community. The abundant supply of gas will lower energy costs throughout the country, relieving residential and business consumers alike and convincing British industries – which have been leaving Britain due to its high energy costs – to not only stay but also to expand their operations in the U.K.

The May approach isn’t limited to shale –  it will apply to developments of all kinds, whether other resource developments, industrial complexes or airport expansions. Through what she calls her blueprint for development projects, May will be converting the development delayer known worldwide as NIMBY (Not In My Back Yard) into PIMBY (Please In My Back Yard), a development accelerator. Residents will effectively become pro-development lobbyists whenever they determine a development personally benefits more than discomforts them.

By voting for change the UK has an unparalleled chance to literally throw out the rule book and adopt policies that would have been anathema to the Brussels bureaucracy. Royalties for landowners close to extractive industries has been a major enabler for the growth of the US energy sector and could have a transformative effect on the UK economy, not least because a great deal of its shale is in the north of the country which was particularly hard hit by the closing of collieries.

It is looking increasingly likely the UK is fostering a relationship with Europe more akin to that Hong Kong has with China than any of the alternatives which could be described as one of the best possible outcomes. If that is indeed the case, the UK might be going through a painful adjustment right now but that is likely to be temporary considering the potential for improving governance to unleash economic potential.

The UK imported almost half its energy requirement in 2013 which represents a sharp correction from when it was largely energy independent. The increasingly costly extraction of North Sea oil has been a burden for the domestic energy balance and the economy, but the above plans to revitalise onshore exploration and development of gas could be a major economic enabler. 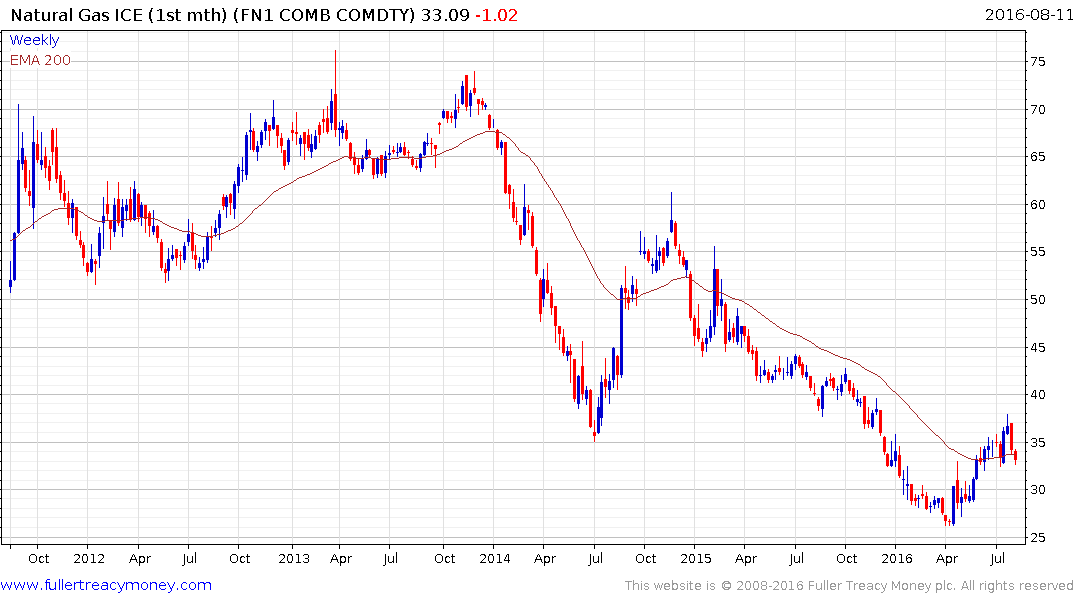 The UK gas contract dropped over the last two weeks to break the short-term progression of higher reaction lows to signal more than near-term resistance in the region of the trend mean. A clear upward dynamic will now be required to question potential for a further test of underlying trading.