This ‘stock market to GDP’ ratio is a hugely important valuation.

Warren Buffett considers it “probably the best single measure of where valuations stand at any given moment.”

But it’s more than that. Because right now, the Singapore stock market barely trades above book value.

If you’re not familiar with the term, a company’s book value is akin to its ‘net worth’.

In other words, if you added up all of a company’s assets (cash, real estate, business inventory, etc.) and subtract its liabilities (debt, taxes owed, etc.), you end up with its book value.

It’s typical for companies listed on a stock exchange to trade for several times their book value.
Facebook’s stock sells for SEVEN times book value. Boeing’s is at THIRTEEN. McDonald’s is nearly SIXTEEN.

In Singapore, it’s ONE. This makes Singaporean stocks a much greater bargain than those in the West.

There is no doubt that a number of Asian stock markets are cheaper than their western counterparts when comparing P/Es, dividend yields and Price to Book ratios. However I am not at all sure that the Straits Times Index has the lowest valuations in the world. 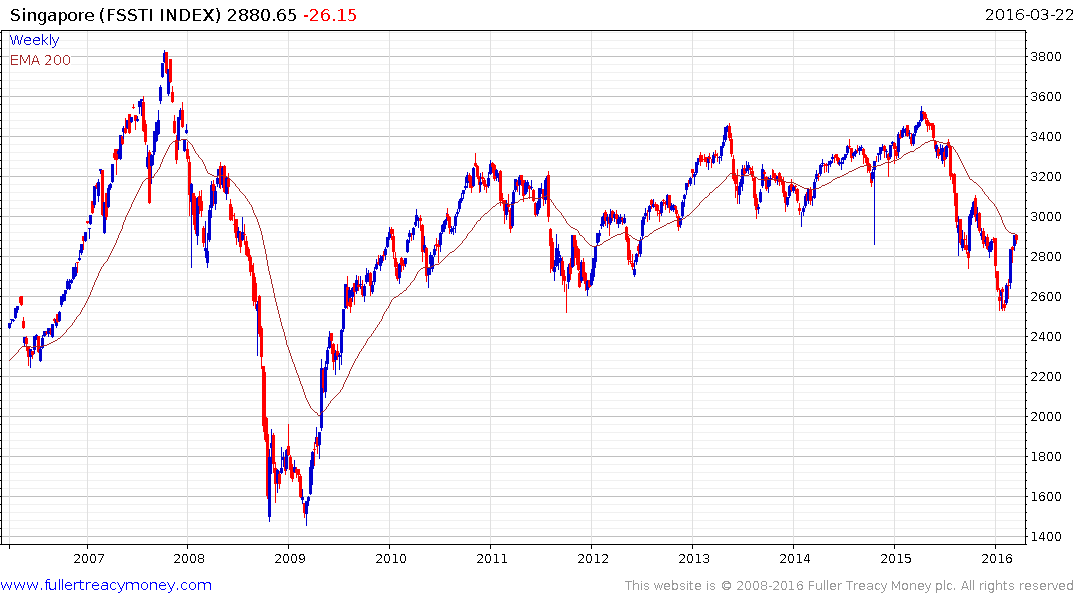 Here is a spreadsheet of a large number of global stock market indices ranked by price to book populated with data from Bloomberg. Singapore comes in at number 18 on the list with a price to book of 1.14. The Index has an historic P/E of 12 and yields 4.17% so it has other competitive characteristics. The counterargument is that property prices are still very high, the cost of living has increased substantially and importantly the Singapore Dollar and Strait Times Index need to demonstrate they can hold their lows to convince investors the market has found more than a near-term low. 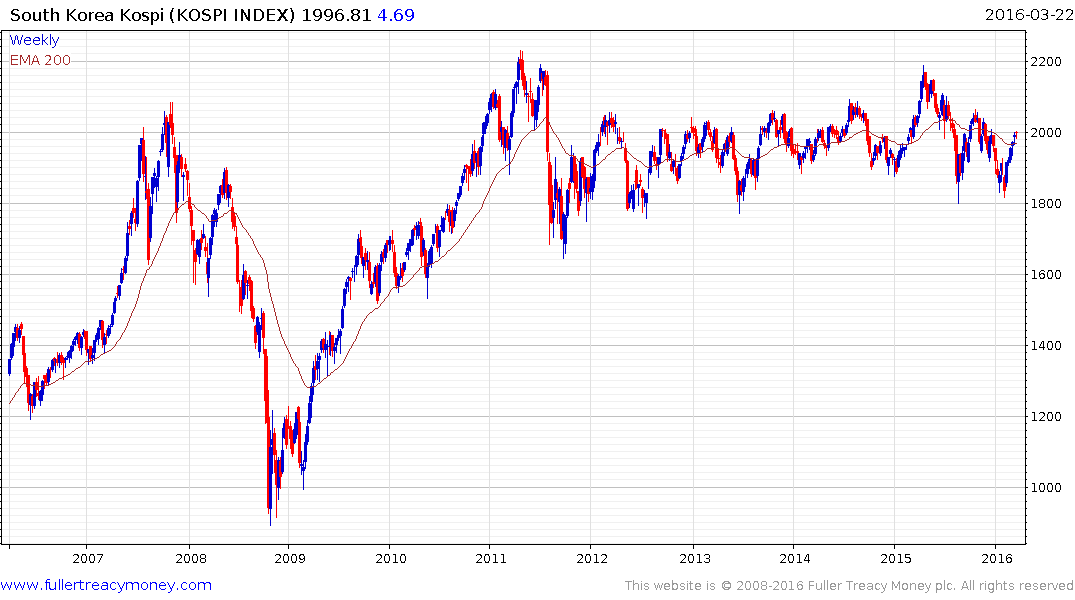 The South Korean Kospi Index is trading in on a price to book of 0.96, has an historic P/E of 15.54 and yields 1.68%. It is has rallied from the lower side of a more than four-year range and is now testing the psychological 2000 level which has offered resistance on a number of occasions since 2011. It needs to sustain a move above that level to signal a return to demand dominance beyond short-term steading. 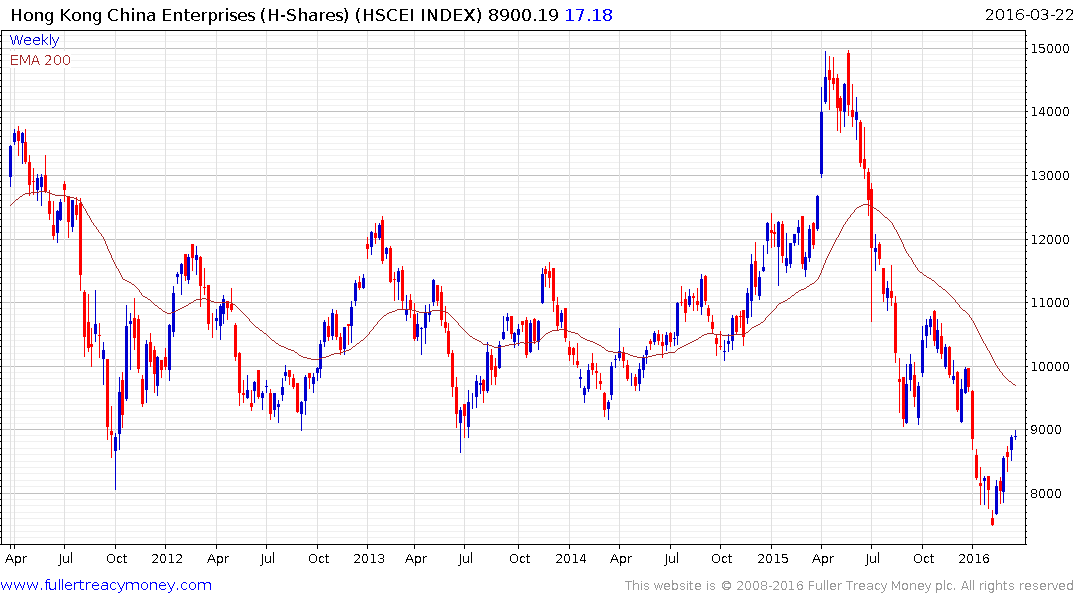 The China Enterprises Index (H-Shares) has a price to book of 0.90, an historic P/E of 6.65 and yields 4.43%. It halved in value between June and the February low and a reversionary rally is underway. How well it finds support above its low on the first significant pullback will tell us a lot about whether it has found medium-term support. 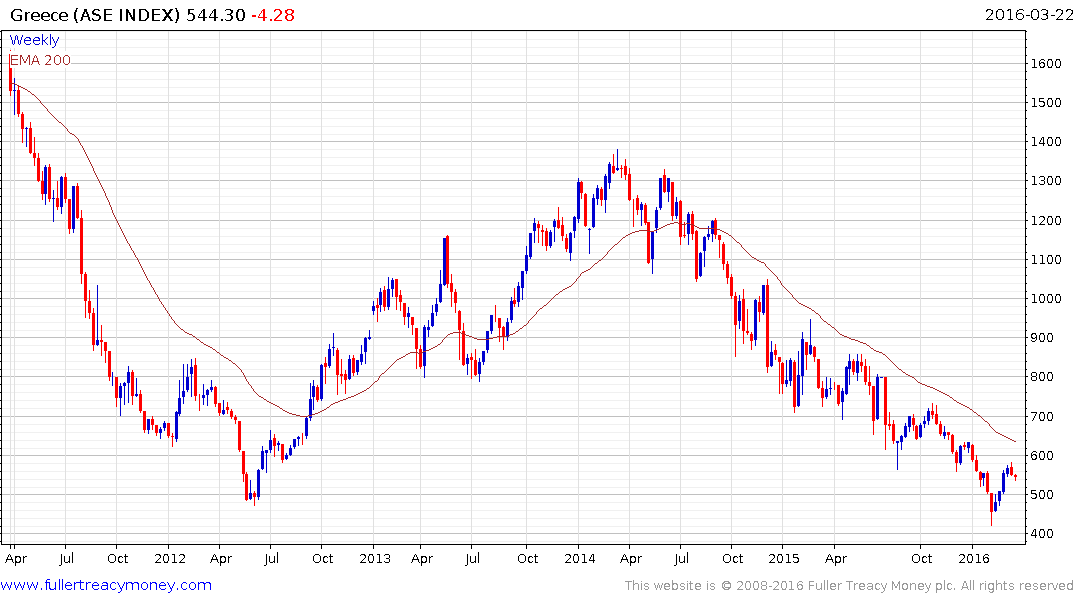 At the top of the list is Greece with a price to book of 0.13. It does not have a P/E, probably because companies are still losing money on aggregate but it yields 2.21%. The index has held a consistent progression of lower rally highs since early 2014 and has rallied over the last month to test that sequence. It will need to find support above the early February low near 415 on a pullback and sustain a move above the trend mean to demonstrate a low of more than near-term significance.

It will not have escaped your notice that short-term overbought conditions are evident in just about every market.