The company said its full-year gold production will be 6.5 million ounces, which compares with a June forecast for 7 million ounces in 2019 and 7.4 million in 2020. The company is “very confident” it can achieve that guidance, Palmer said, noting that guidance for next year will be provided in December.

The lack of clarity about next year could worry investors, Anita Soni, an analyst with CIBC World Markets, said in a research note. “No further 2020 outlook was provided, which will likely be an overhang on the stock given the uncertainty surrounding the production profile for the recently acquired Goldcorp assets,” she said.

From a risk-adjusted perspective buying a producing mine, with well-understood resources is more favourable than committing to building a mine and contributing to proofing up reserves. That is what we are seeing from the gold mining sector at present. Major miners would rather merge than engage in speculative activity. It is that kind of conservative approach to managing mining operations that contributes to value creation. It’s when appetite for borrowing, investment and speculation increase that investors need to be particularly wary. 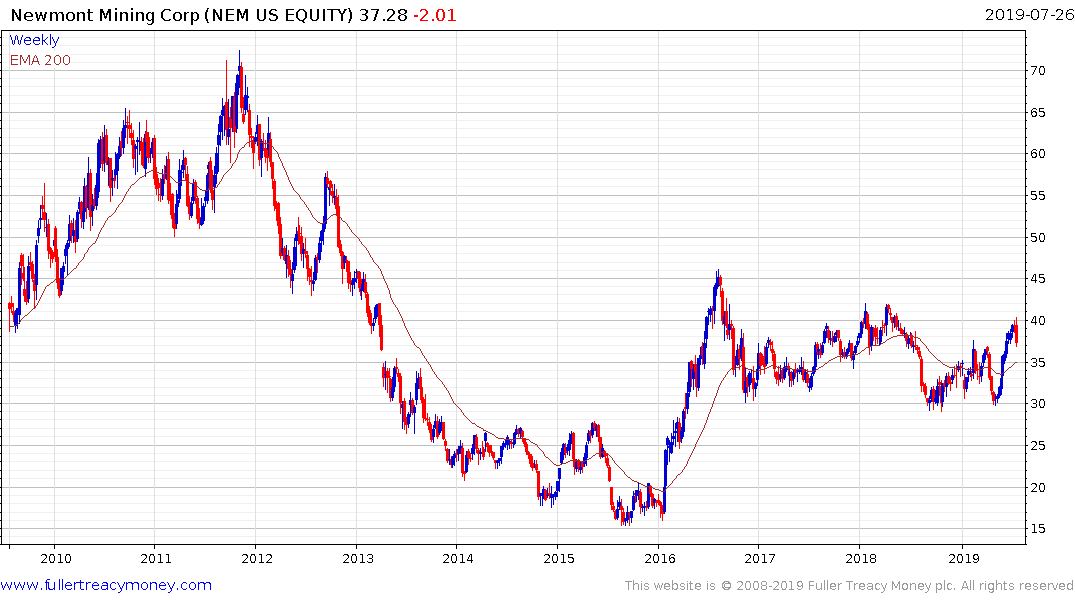 Newmont encountered resistance in the region of the upper side side of a 3-year range this week. A higher reaction low will confirm a return to demand dominance beyond the short-term rally seen to date. 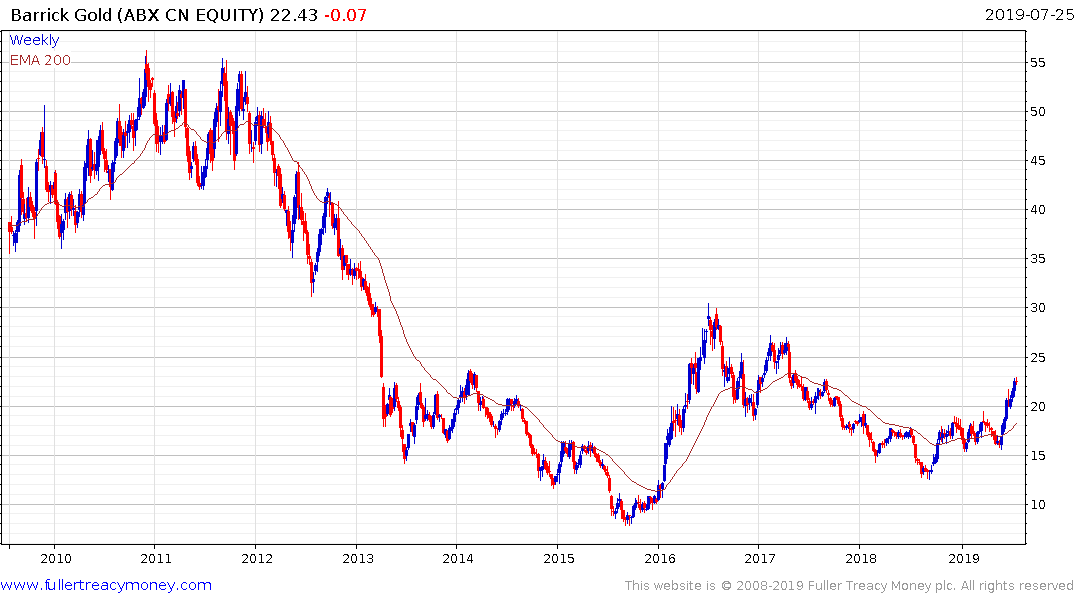 Barrick Gold has broken out of a one-year base formation and a sustained move below $19 would be required to question recovery potential.

Outside of the majors there is a considerable number of companies that have all-in production costs in the region of $850 - $900 an ounce. It is these shares that are most acutely leveraged to the rise in precious metals prices provided they continue to growth free cashflow. 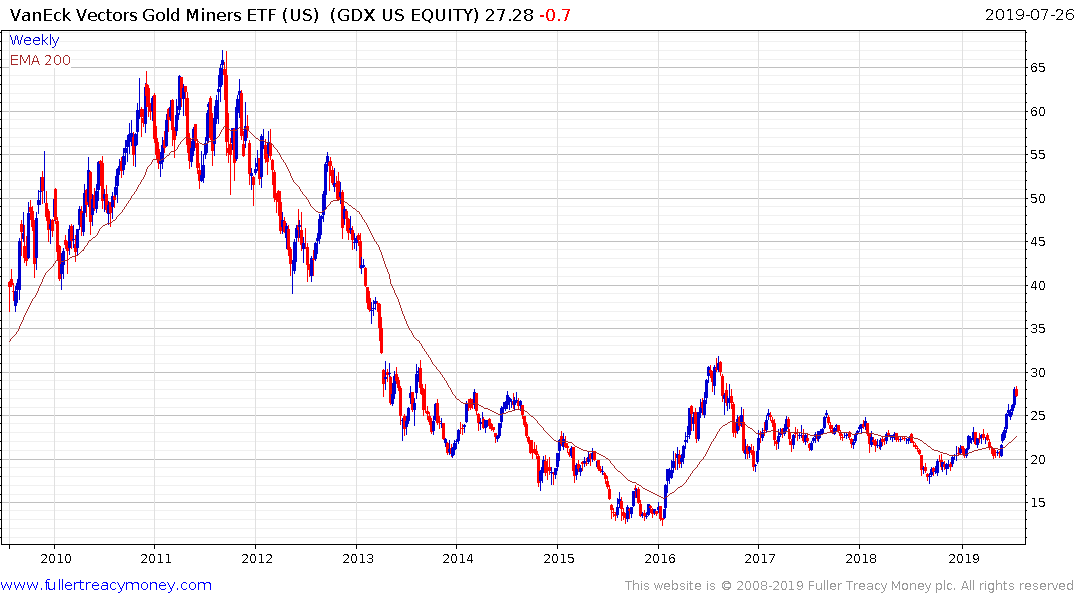 The VanEck Vectors Gold Miners ETF has rallied over the last couple of months to break the sequence of lower rally highs. Some consolidation of that gain is underway but a reaction of more than $3 would be required to begin to question the strength of the breakout.

A little more than a year ago, at The Chart Seminar in Melbourne, the big takeaway was the outperformance of the domestic gold miners. Since then sector has been among the best performing of global gold miners. Perseus Mining now appears to be completing its base formation. 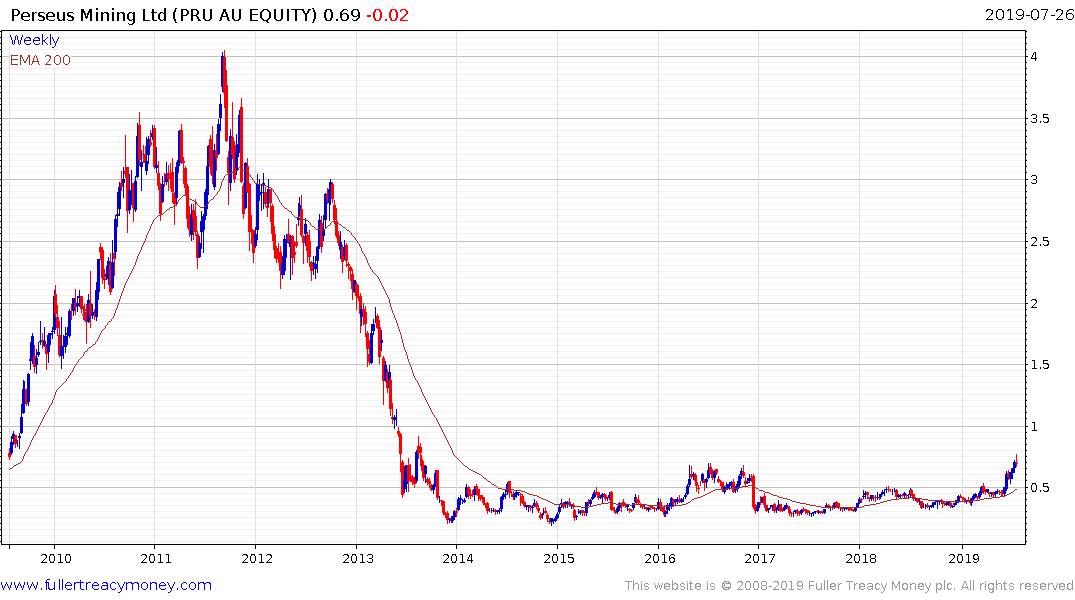