Email of the day - what will signal a bottom:
Comment of the Day

Email of the day - what will signal a bottom: by Eoin Treacy

I understand the reasoning behind the various precautions being recommended & taken, but what will be the criteria for sounding the all clear? Using the present logic, it seems that as long as there is at least 1 person with the virus the threat remains & the precautions should remain.

Thank you for this question which others may also have an interest in and it is a highly relevant topic as trends accelerate. 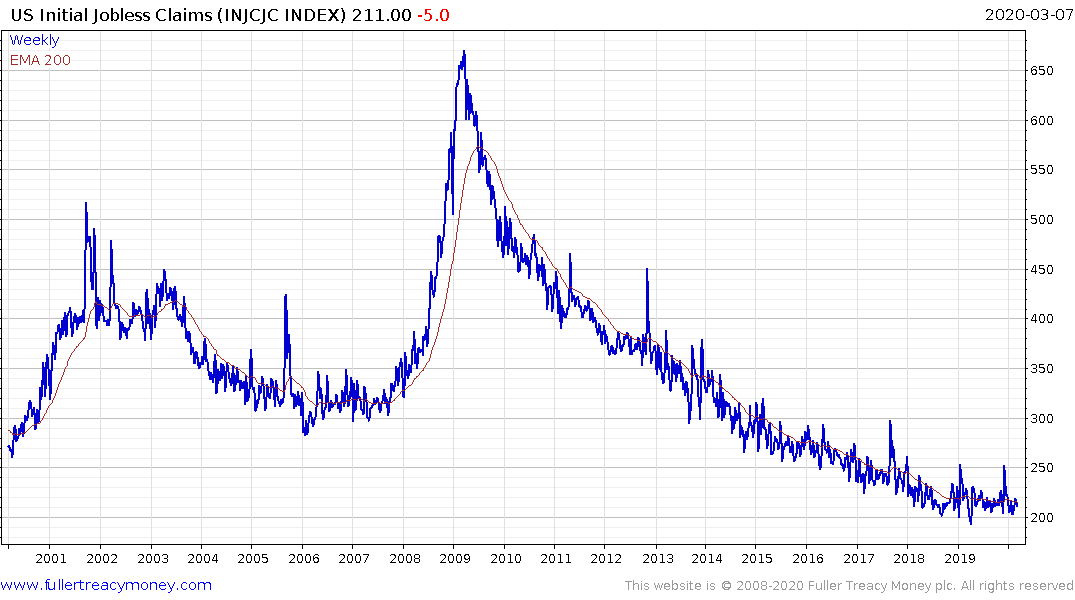 Unemployment data is about to get ugly. Jobless figures are reported with a two- week lag so the update on Thursday will be for March 7th. Thousands of people lost their jobs yesterday with shutdowns in cities like New York, Los Angeles and San Francisco, The same will be true in much of Europe where economic activity is grinding to halt. Retailers like TJX have hundreds of thousands of employees and we need to question how long they can sustain payroll without cutting headcount significantly.

Temporary worker numbers peaked more than a year ago but can be expected to fall off a cliff when next reported on April 3rd.

All of this points towards a significant economic contraction this month and that is likely to have a knock-on effect for the 2nd quarter. Therefore, the market is now pricing in a recession of unknown proportions and duration.

Everyone I have had a conversation with is talking about buying the dip, how much value has just been created and the kinds of opportunities that are now present. I have to admit that makes me wary. I can certainly rationalize looking at deep value plays in today's market, but diving into the most highly valued issues a few weeks down from the top seems to me to be foolhardy.

We have just seen a massive reaction against the prevailing trend for the record books and sentiment is going to take time to recover. The clearest evidence of bottoming will be we see a rebound which finds support above the low.

In the short-term the same kind of RSI divergence is evident today as marked the peak on February 18th.  The supports the view we could see a reversionary rally soon. The stock market is likely to bottom well ahead of the last coronavirus case. The biggest challenge is in moderating the pace of the spread so medical systems are not overburdened. Once that has been achieved social distancing will be relaxed.

The big challenge is in the credit markets. Commercial real estate is both expensive and many tenants are highly leveraged. The threat of a significant default cycle is non trivial. Right now, the USA in particular is exploring sending every one $!000 in as little as two weeks. That will mean a lot to people outside the primary cities but it will need to be followed with assistance of the corporate sector. The extent to which governments are willing to ignore credit norms in providing assistance now, will have a significant impact on how many defaults in fact occur.

The biggest near-term risk remains high yield energy where spreads are significantly higher than either 2008 or 2015.