If the impact of the outbreak can’t be contained this quarter, annual growth forecasts will need to be revised down, Huw McKay, BHP’s vice president of market analysis and economics, said Tuesday in a blog post. “This would then flow directly through to lower commodity demand and price expectations.”

BHP forecasts China’s growth to slow to about 6% this year and as low as 5.75% in 2021 based on a swift recovery from the virus outbreak. In a worst-case scenario that combined a lingering impact from the virus and a re-escalation of trade war tensions, the nation’s economic expansion this year could slip to 5.5%, the miner said.

Goldman Sachs Group Inc. and Macquarie Group Ltd. are among banks who’ve cut China growth forecasts for both the first quarter and the full year as a result of the outbreak. China’s gross domestic product will grow 4% in the first quarter, according to the median of 18 forecasts since Jan. 31, which would be the lowest level since 1990.

The working assumption most investment models are relying on is the trajectory of the coronavirus outbreak and recovery is going to follow that of SARS. Even though the number of cases and deaths is larger and the coronavirus is more contagious, the measures taken to contain it have been much more aggressive. Therefore, the majority of investors have concluded that a V-shaped recovery is the most likely scenario.

The most important statistic to monitor is the rate of change for infections. That is not exhibiting an exponential growth curve, particularly outside Hubei. That supports the view we are approaching the peak infection rate if we have not already seen it. There will still be a mounting tally of deaths and the news flow is likely to continue to focus on cruise ships and lost airline traffic. However, if the rate of infection is slowing down there is a solid argument for believing we will see a peak infection rate in the first quarter. That is of course contingent on the numbers of infected outside of China remains low. 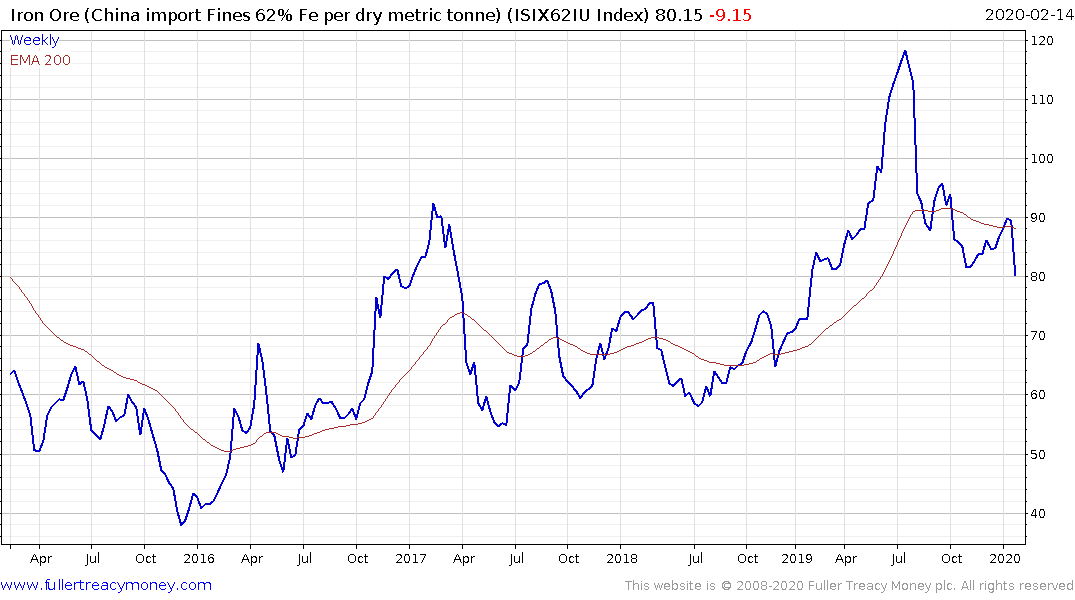 Qingdao iron-ore prices are holding the region of the upper side of the underlying trading range, at least for now. 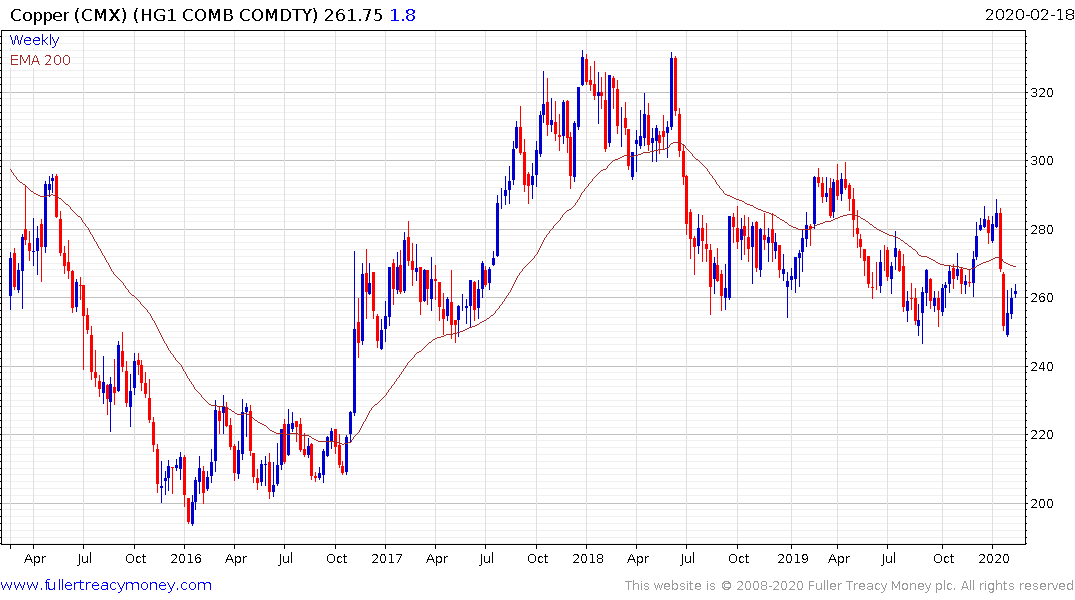 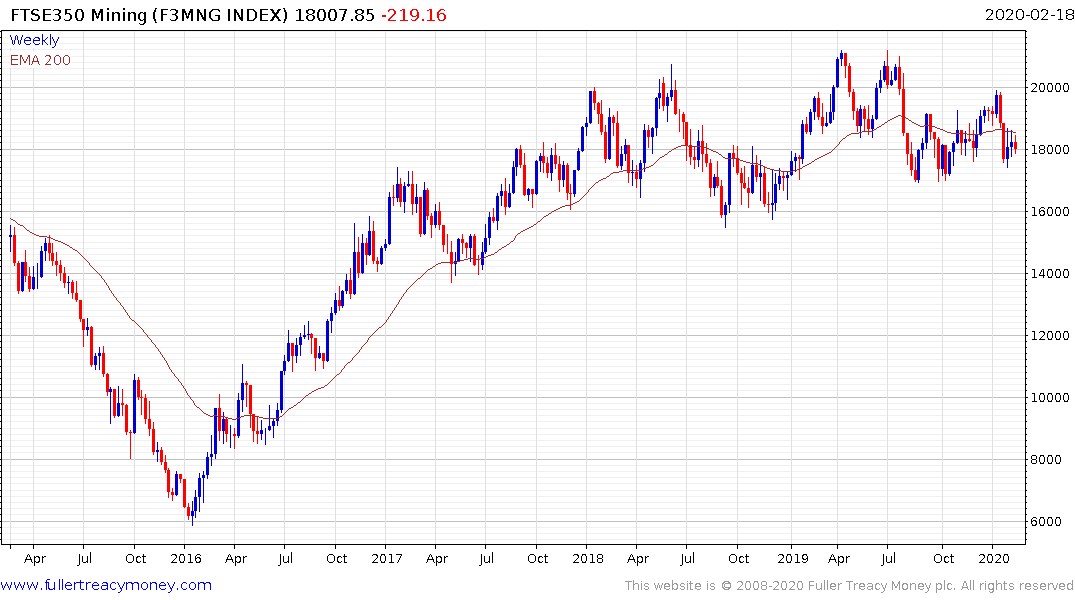 Meanwhile, the FTSE-350 Mining Index remains rangebound. It needs to hold the 16000 area if potential for higher to lateral ranging is to be given the benefit of the doubt. 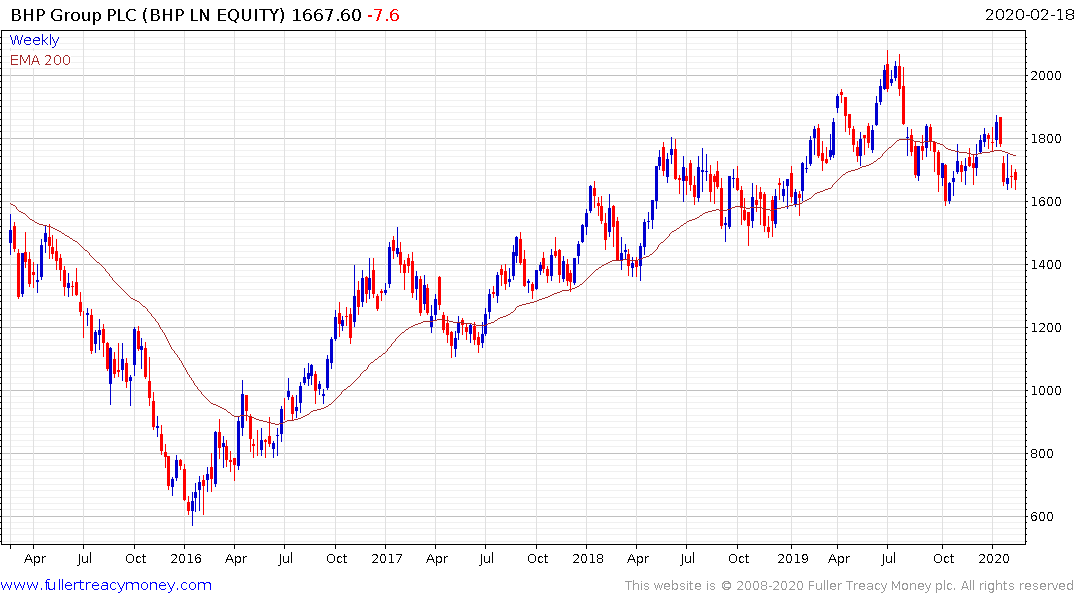 BHP is a significant component of the sector. It encountered resistance in the region of the trend mean in January and needs to hold the low near 1585p if the four-year sequence of higher reaction lows is to be sustained.

This report from Raymond James takes a pessimistic view. Here is a section:

After consultation with a wide range of key thought leaders, we are increasingly convinced the impact of the virus will get worse before it gets better. We hear statements by the leaders of the response (some of which we highlight below) and we just have too many doubts to believe we have turned some corner on the virus. When we see a Japanese tourist spend a week in Hawaii while sick from coronavirus without being identified at any point during his stay and only being diagnosed when he returned to Japan; our belief that more cases will occur in the U.S. is only heightened. The fact a vast majority of those infected only have mild symptoms means we could have community spread and only find out once the 5-6% of people get hospitalized. At the time we see a spike in hospitalizations it will likely be too late to prevent it from becoming widespread.

In China, we continue to believe the government is underreporting the cases. Factories were supposed to be humming again and yet reports from across the nation show a large number of factories remain closed and many of those that are open are not operating at full capacity. If China truly wants to stop the spread, it likely has to keep the travel lockdown for the remainder of February and likely until mid to late March. Assuming the fatality rate is low, China may decide the economic impact isn't worth the cost of preventing further disease spreading and could reopen the hardest hit areas before advisable from a public health perspective.

The problem with ignoring the potential the coronavirus is the market is priced for perfection. I mentioned the S&P500’s bearish RSI divergence yesterday but the University of Michigan Stock Market Increase Probability indicator trading above 60% has previously been associated with medium-term peaks. The most positive factor is the reaction on the stock market has so far been relatively mild because investors continue to put their faith in the support of central bank liquidity. At least some additional pause and consolidation appears the most likely scenario.