Why structural reforms are EM's last stand
Comment of the Day

Why structural reforms are EM's last stand by Eoin Treacy

Despite its impressive growth record over the past decade and a half, India’s structural deficiencies are well known, holding back its potential. Infrastructure is poor, goods market efficiency suffers from excessive regulation, labor market is inflexible, little is spent on health and education, and both the economy and financial markets have been hampered by heavy handed state intervention.

Our analyses show that not only is India in a mediocre cohort with respect to its structural strength, it has in fact slipped in recent years. While education attainment has improved marginally and the economy has undergone a few bouts of liberalization measures, there have been setbacks in areas such as goods market efficiency, labor and financial markets, along with no discernible improvement in institutional quality. India scores particularly poorly on infrastructure.

?It is too early to tell if the new government that came to power in mid-2014 will be able to improve India’s structural scores expeditiously. Efforts to maintain fiscal discipline, raise the efficiency of cash transfer to the poor, reduce wasteful subsidies, tackle corruption, improve health indicators, pass the much-belated Goods and Services Tax legislation, widen the scope of privatization, liberalize the labor market, break down goods market cartels, pass business friendly laws, etc are welcome, but clearly the to-do list is arduously long

Furthermore, the structural scores would rise only when such measures are pushed through successfully, many of which would likely receive pushback from vested interests and face numerous other implementation risks, especially related to the political calendar. We appreciate the goal of the government to improve India’s ranking in the cost of doing business surveys, but would need to see a broader range reform initiatives in order to anticipate decisive improvement in structural rankings.

Here is a lihk to the full report.

Structural reform is perhaps the clearest evidence of improving standards of governance. However if one waits for the full effects to take shape the chances are the market will have already priced in the majority of the positive outcome. There is no doubt that India has many challenges facing its economy in achieving greater efficiencies and growth outcomes for more of its people.

The change augured by the Modi government is a reflection of a newfound willingness to tackle what have been intransigent roadblocks to growth and the market continues to give them the benefit of the doubt. . 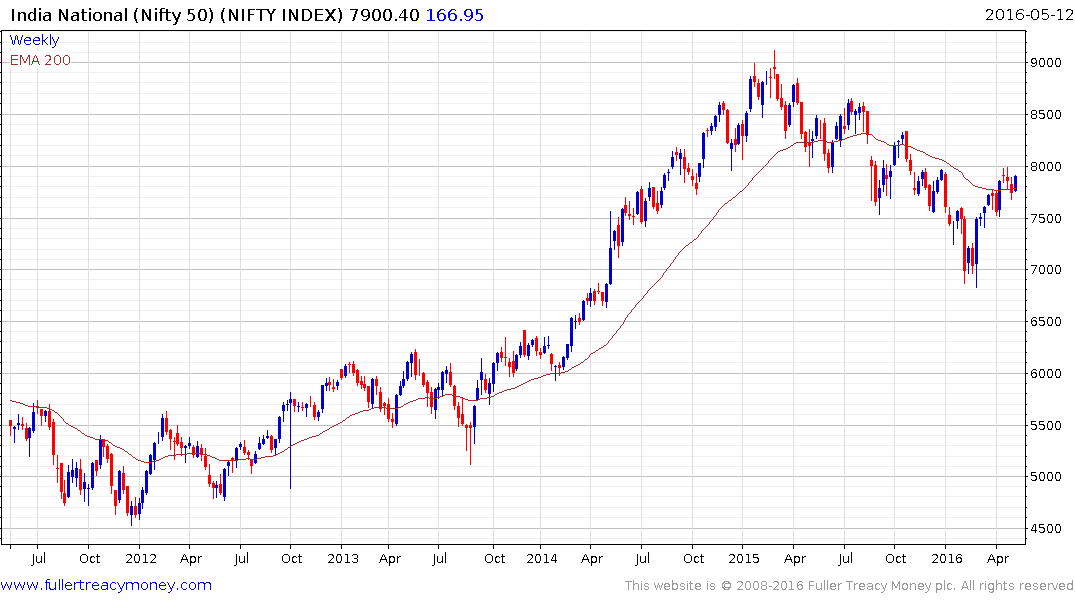 The Nifty Index has now broken a medium-term downtrend and a sustained move below 7500 would be required to question medium-term scope for additional upside.