Welcome to the future: Three things Back to the Future got right
Comment of the Day

Welcome to the future: Three things Back to the Future got right by Eoin Treacy

Good morning and welcome to the "future." At approximately 4:29 p.m. Hill Valley time on Oct. 21, Doc Brown and Marty McFly arrive at the present day. For many millennials especially, the 1985 film series Back to the Future represented the far-flung fantastical future that many dreamed would come. But how does the Reagan-era vision of a future where we don't need roads compare to our daily lives today?

Sadly, you probably came to work today on the same street you may have trodden as a child back in 1985 without a hover board. But our future is still pretty fantastic, and many of the outlandish futuristic devices you saw in the 1989 film Back to the Future II are closer than you think—or already here. Here are three predictions that the film made that today might actually turn the head of an ‘80s time traveller

Back to the Future was a fun franchise and growing up we all looked forward to owning a hoverboard. Despite Lexus’ rather cool demo product which they seem to have designed just for fun, we are still a long way from flying cars. Drones on the other hand are going from strength to strength as the cost of production continues to decline and GPS is integrated with progressively more products. We don’t have flying cars either but Stanford just released a video of a DeLorean autonomously turning donuts on a test track which signals where scientists think the future will be.

Self-drying clothing is still a ways off but wearables are going from strength to strength. Teenagers permanently plugged into their media devices looked like aliens in the movie but is that really so far from reality today. A wholly immersive media experience is only going to intensify as virtual reality’s rollout ramps up from next year. Microsoft’s bet on holograms is eerily similar to the movie.

Learning a language in adulthood is incredibly time consuming. In fact schools are highly successful at teaching in one style but unfortunately not everyone is suitable to that kind of teaching. A substantial number of highly specialised professional and highly paid occupations rely on rote learning for students to pass board exams. Surgery, accountancy and law all require this. However what sets one practitioner apart from others is not so much in their command of the minutiae but the uses to which they put that knowledge to.

If we think about 2045 instead of 2015, then it is not beyond the bounds of possibility that we will have instant access to information and the human’s role will be interpretation, editing and choosing innovative uses for the data. 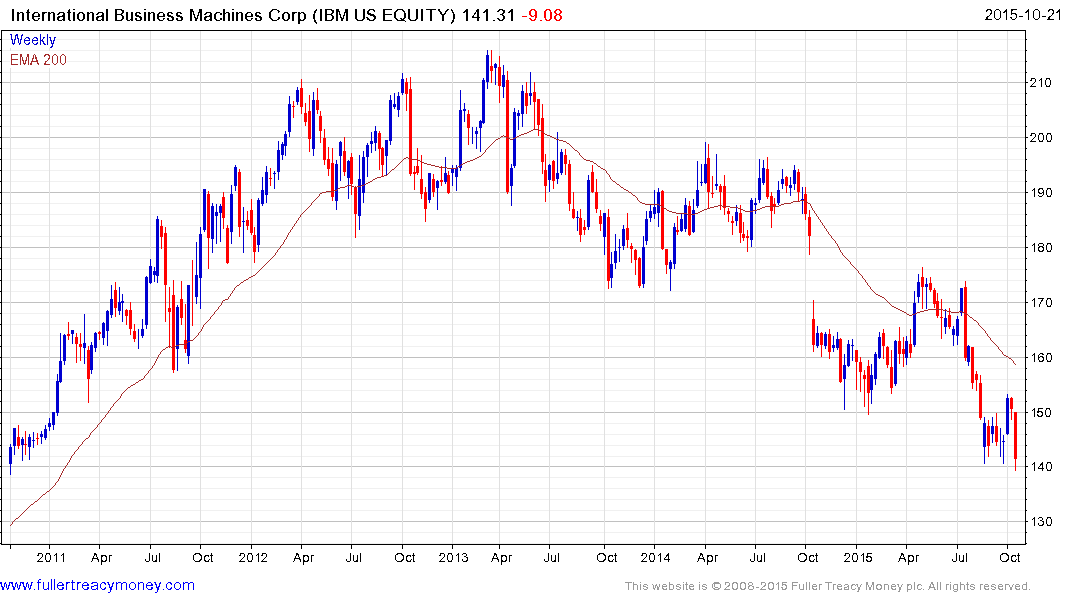 IBM’s True North cognitive chips represent an interesting development that has been underway for some time. The company has a long history as an innovator but has a less reliable record of monetising its creations. The share price remains in a reasonably consistent downtrend and will need to sustain a move above the moving average to question potential for continued lower to lateral ranging.