“I don’t expect the consensus to be right, I’m just surprised by how wrong it has been,” Jim Bianco, president of Chicago-based Bianco Research LLC, said by telephone on May 28.
The seemingly unstoppable rally has caused bond-market professionals to reassess whether they’re using the right tools.

?At the New York Fed, researchers Tobias Adrian, Richard Crump, Benjamin Mills and Emanuel Moench on May 12 released an updated methodology for a metric known as the term premium, which can be used to determine whether 10-year Treasuries are cheap or expensive relative to short-term rates.

After stripping out all human predictions and using only market prices to calculate future expectations, the researchers found the extra yield longer-term Treasuries offered has been “considerably higher since the onset of the financial crisis” than previous models, according to their blog post that included the data. That may be because the metric now suggests the Fed’s short-term interest rate may not rise as high as survey-based results predicted, wrote the economists.

Perhaps the most important event in the bond markets between Friday and Monday was that the most active contract has rolled from June into September. This means that anyone with a leveraged position in these markets has had to make a decision to either take some money off the table, following last week’s impressive rally, or to roll their trades into the September contract. Since the first and second months are the only futures with any liquidity, the roll represents an important decision making period of time. 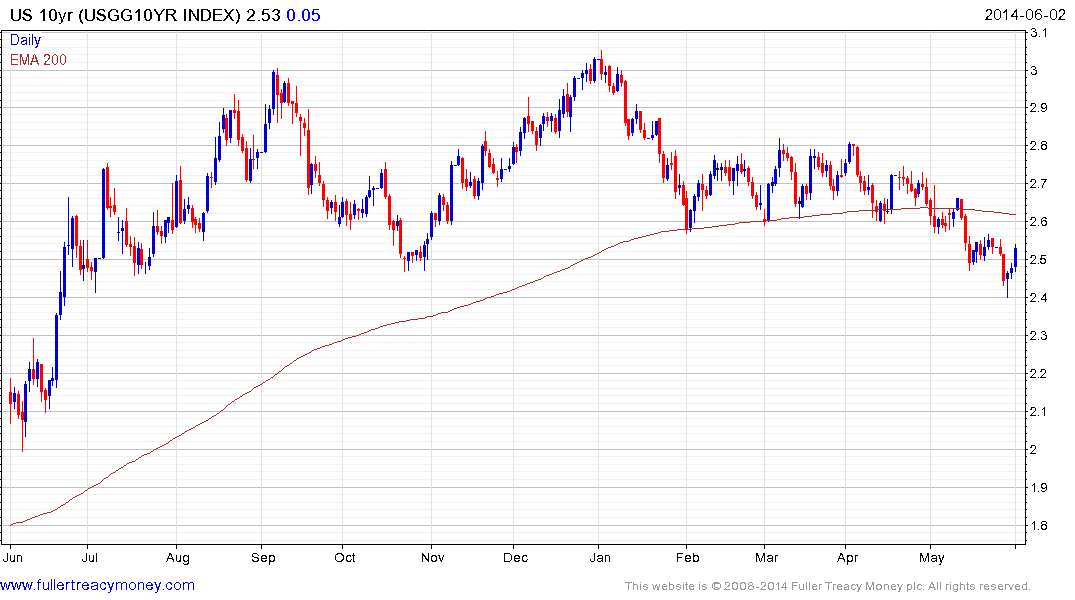 Today’s upward dynamic suggests at least some people decided discretion was the better part of valour at the lower side of the range for 10-year yields. Additional follow through this week would confirm a failed downside break wile a sustained move back above the 200-day MA, currently near 2.61%, would increase the chances of a return to test the 3% area.