U.Ks FTSE 100 Rides Past Record, Reaching 7,000 for First Time
Comment of the Day

“U.K. stocks have had a strong rise given the headwinds,” Richard Hunter, head of equities at Hargreaves Lansdown Plc in London, said by phone. “Mining, oil and bank stocks make up a big part of the index, and we all know the difficult time these three sectors have had. Despite that, the FTSE 100 has managed to make progress.”

It’s been a good week for the benchmark: Chancellor of the Exchequer George Osborne on Wednesday unveiled higher economic growth and lower deficit and unemployment forecasts along with help for the North Sea oil industry. The latter has helped energy stocks trim declines spurred by a rout in oil and metals prices. Banking shares have been hurt by a series of scandals ranging from manipulation of interest-rate benchmarks to tax- evasion schemes.

Even with the FTSE 100 at a record, the advance in British equities this year is about a third that of gains in European peers, which was boosted by additional stimulus from the region’s central bank.

Clicking through the constituents of the FTSE-350 sector Indices section of the Chart Library, we can see that the UK stock market’s rally is well supported, It is also worth noting that the banking, resources and oil & gas sectors are no longer acting as headwinds, have all found at least near-term support this week. 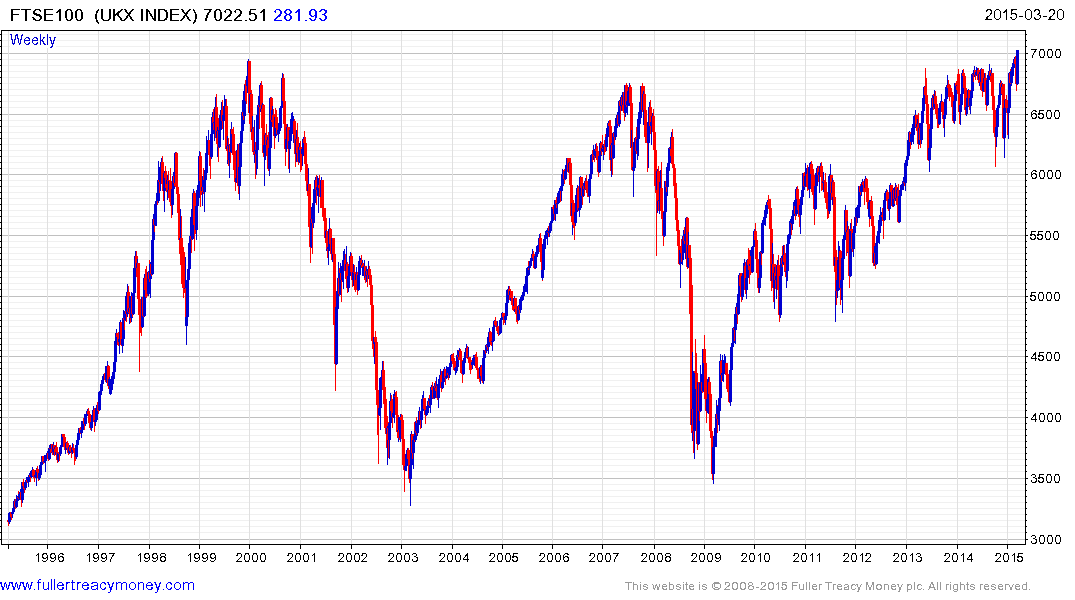 We are in the final stages of testing for the new filter system and hope to re-launch it soon. Perusing the results of this high/low filter for the FTSE-350 we can see that the majority have been trending for some time which highlights just how much of a brake the above sectors have represented for the UK stock market.

In the table, the columns represent performance over 1 month, 3 months, 6 months, 12 months, 3-years and 5-years. It will only show data for when the respective share has hit a new high. Therefore at the top of the table you will see all the columns are filled because prices have hit new five-year highs while further down the list a share may only have hit a new 3-month high.

The number of investment trusts hitting new 5-year highs is notable not least because of the spread of sectors and geographic regions they represent. The implementation of the Retail Distribution Review (RDR) has also benefitted the sector because they do not have the fees and other loadings of open ended funds. 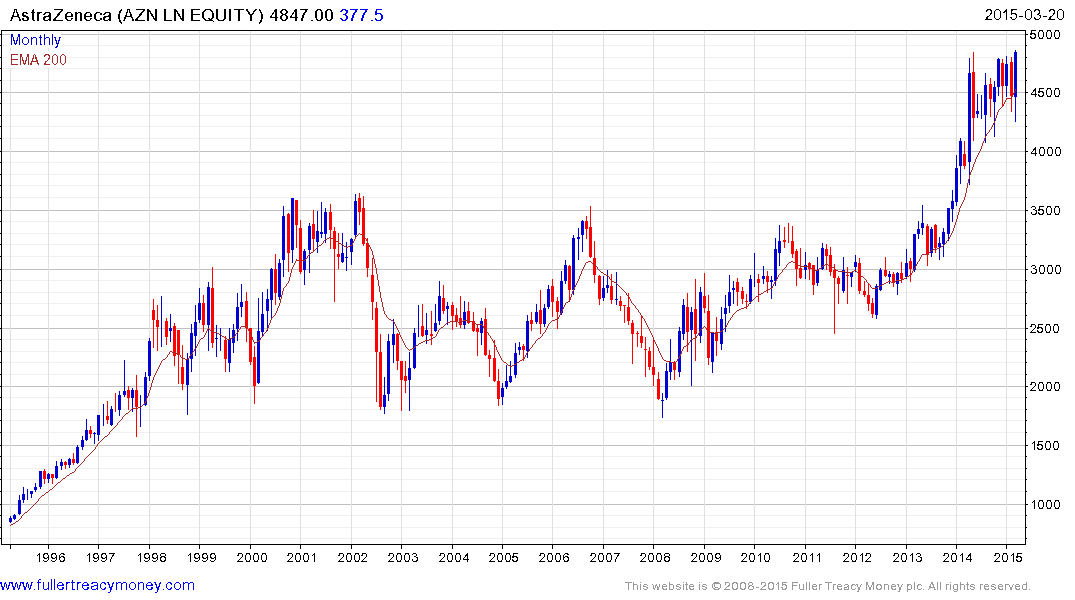 Among large caps, Astra Zeneca appears to be in the process of completing a yearlong range and yields 4%. 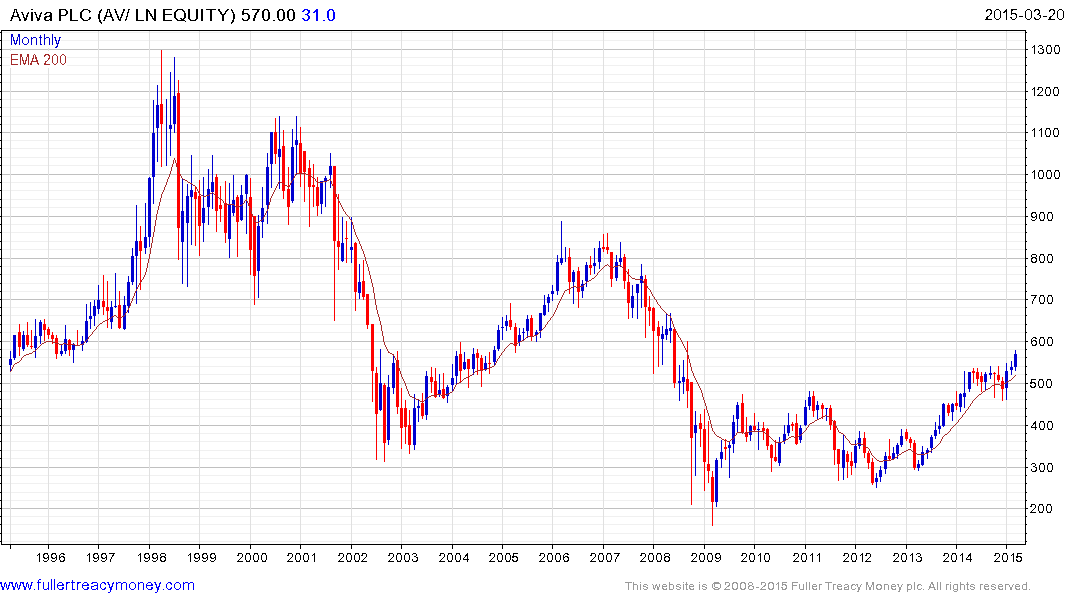 There is a high degree of commonality in the insurance sector right across Europe. Aviva (DY 3.5%) is now completing a first step above its five-year base. 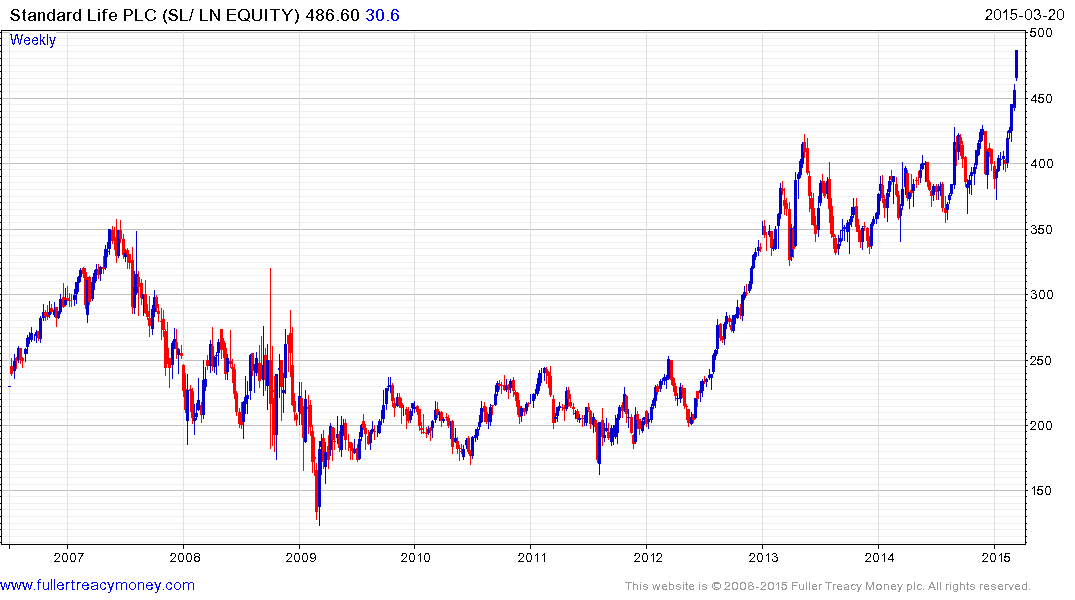 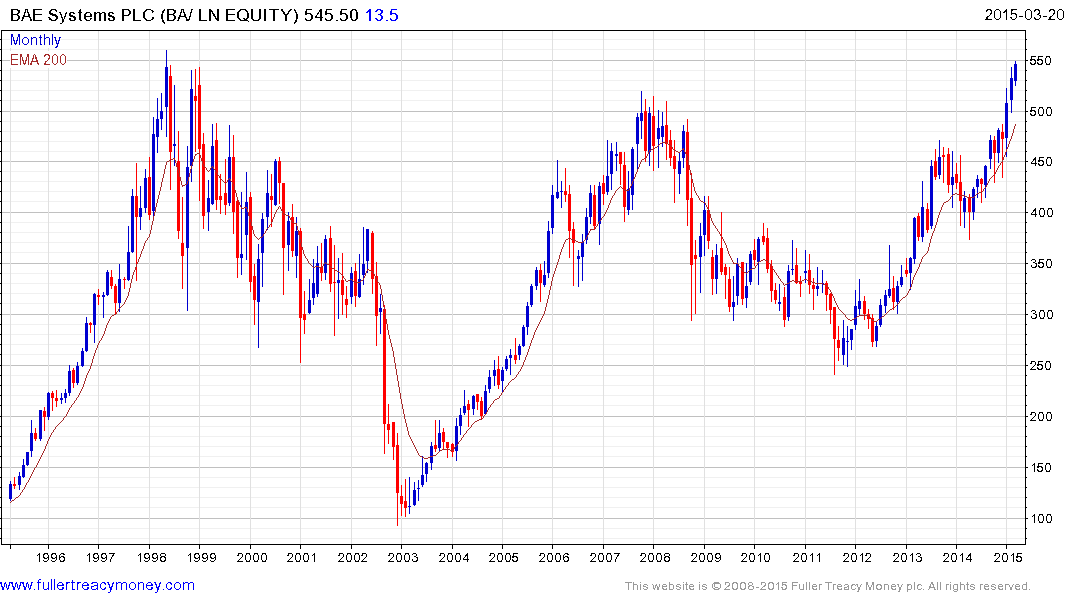 BAE Systems (DY 4.08%) is now testing its 1998 peak near 550p. Some consolidation is possible
in this area but a sustained move below the trend mean would be required to question medium-term upside potential. 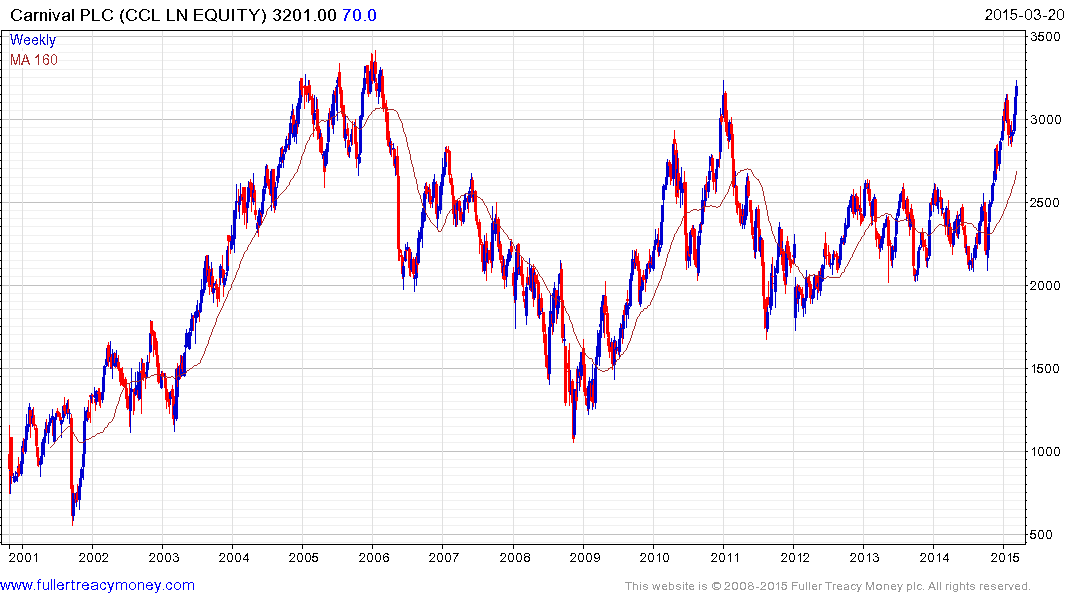 Carnival (DY 2.25%) has rebounded to retest the upper side of a decade long range. 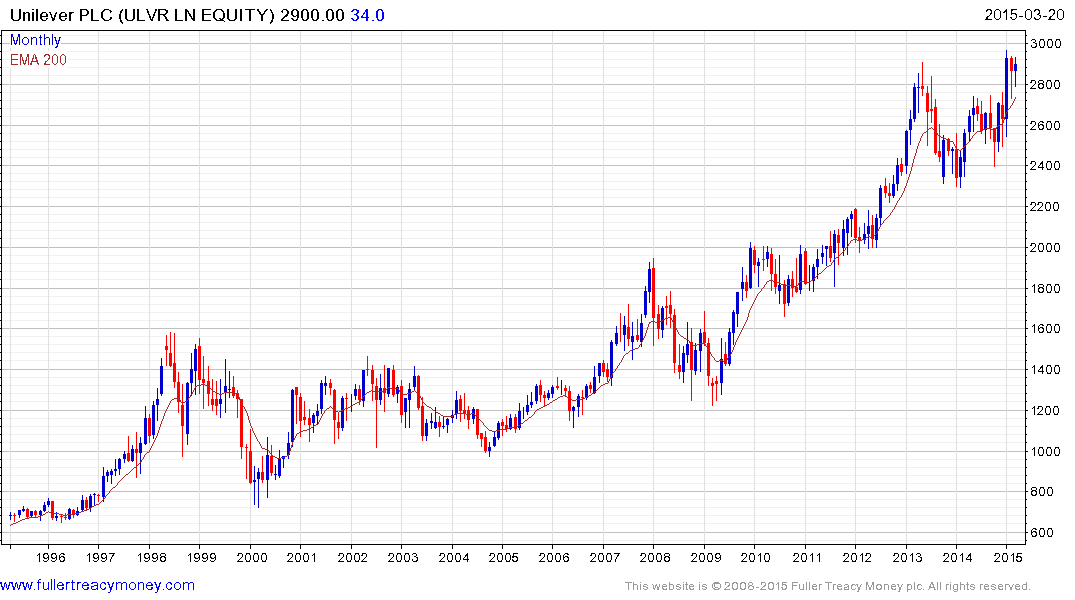 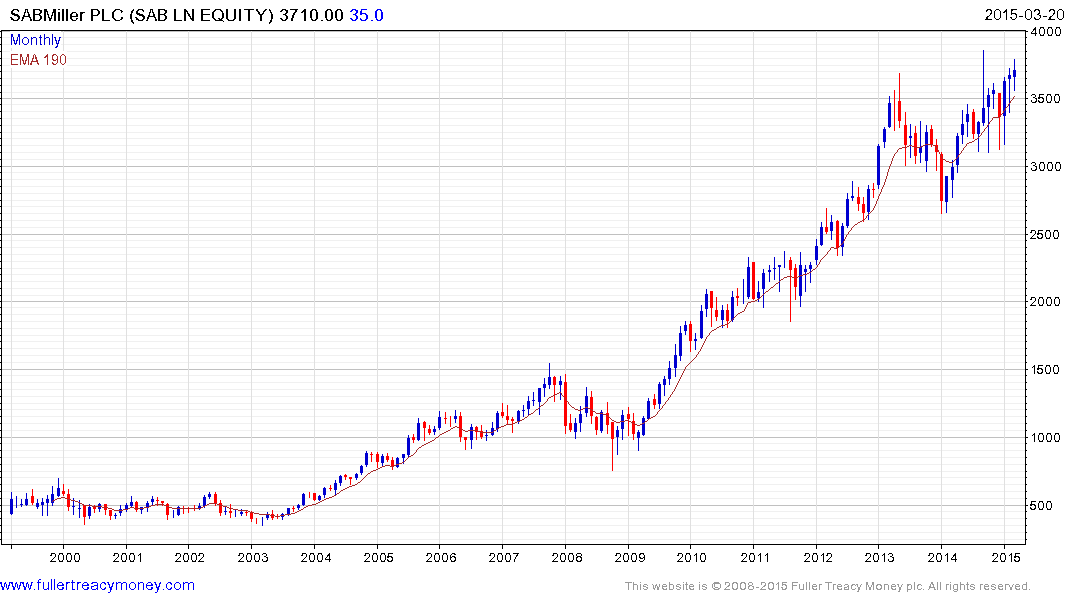 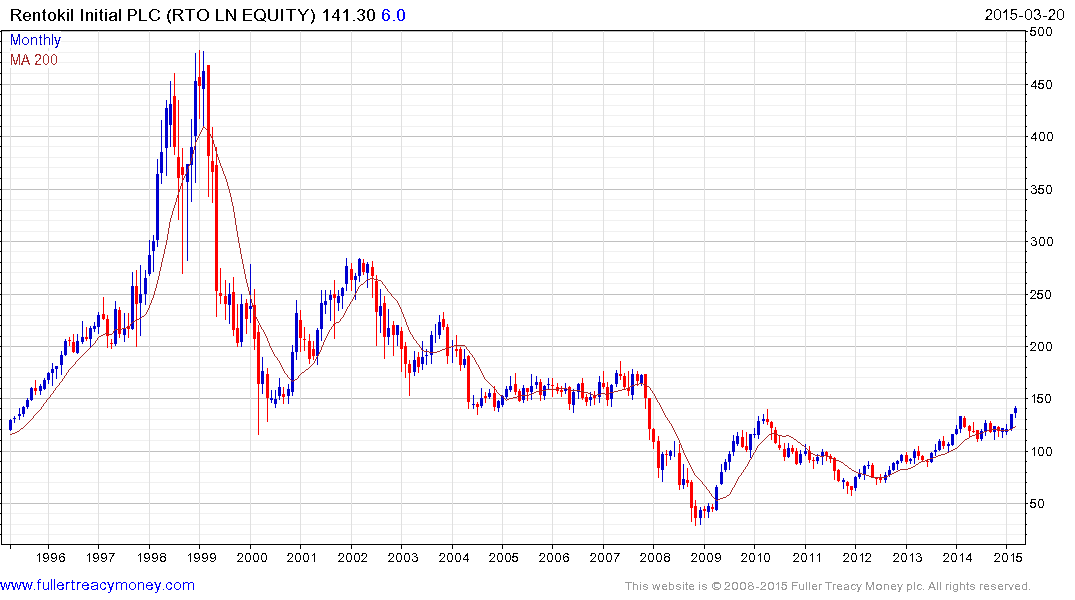 Elsewhere, Rentokil is testing the upper side of a more than five-year base. 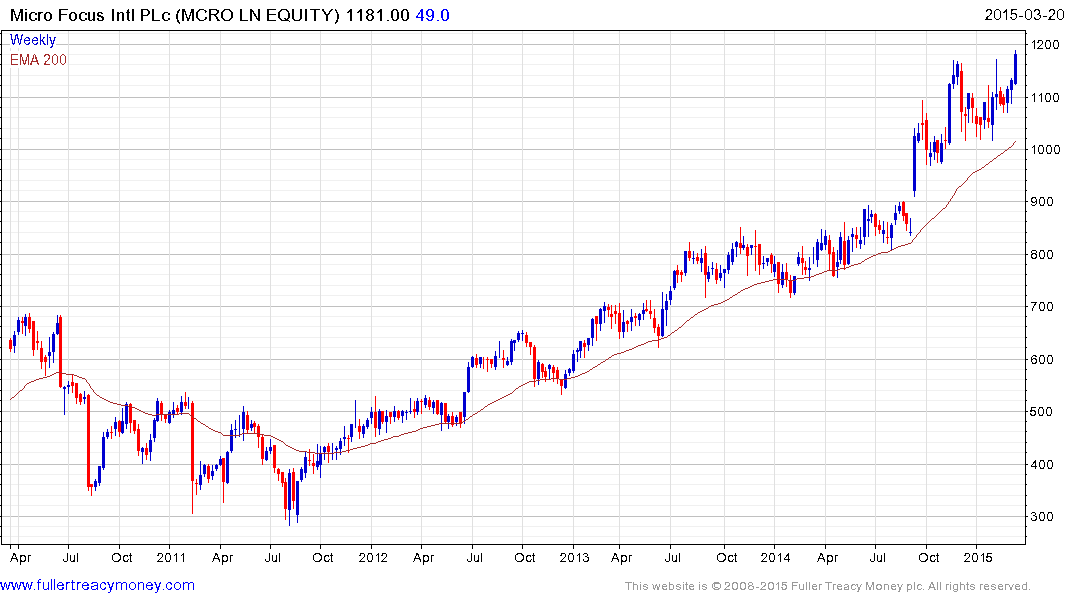 Micro Focus International, in the application software sector, remains in a consistent uptrend. 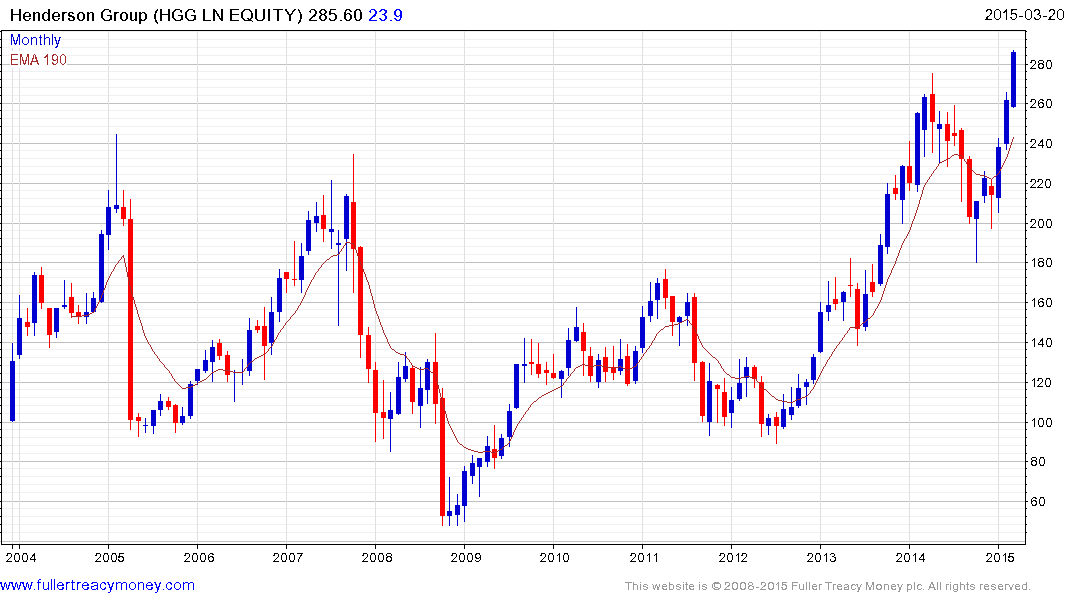 Henderson is currently in the process completing a lengthy first step above a decade long trading range. 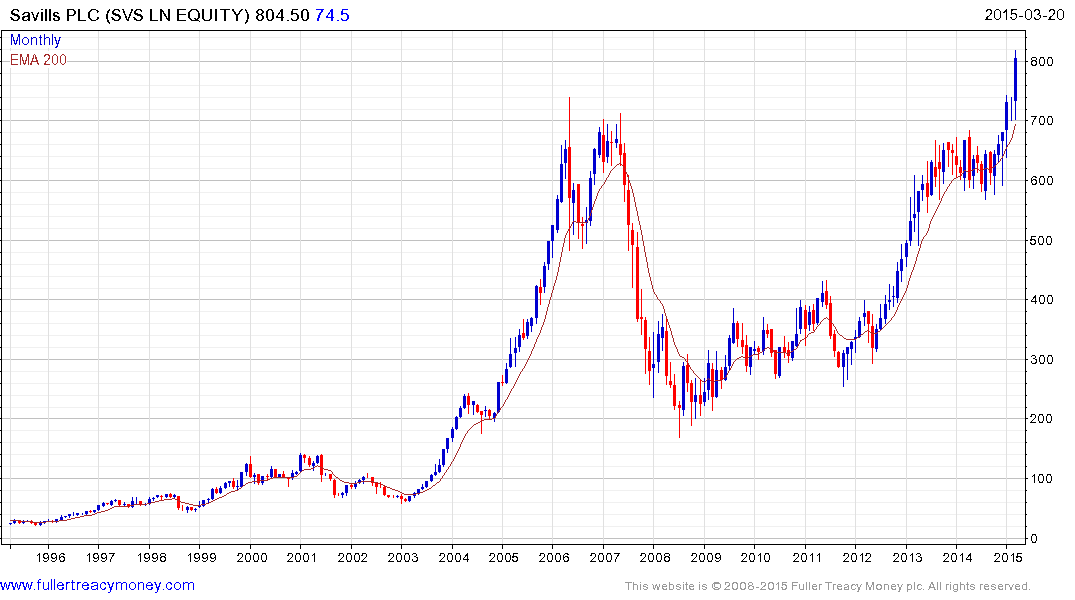 Savills broke out of new all-time highs in January. It consolidated briefly and surged higher over the last week. 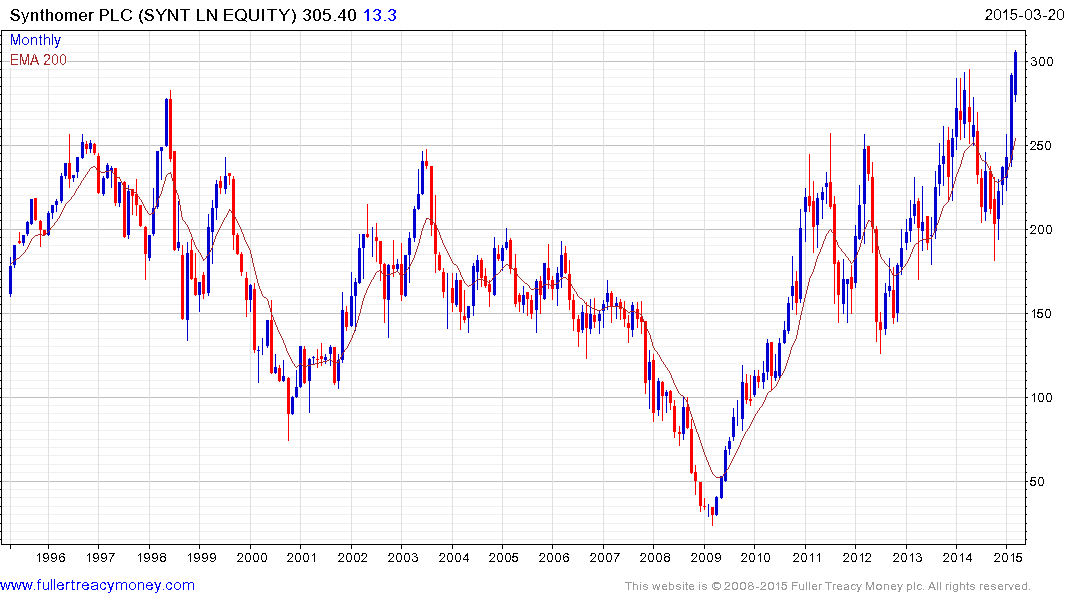 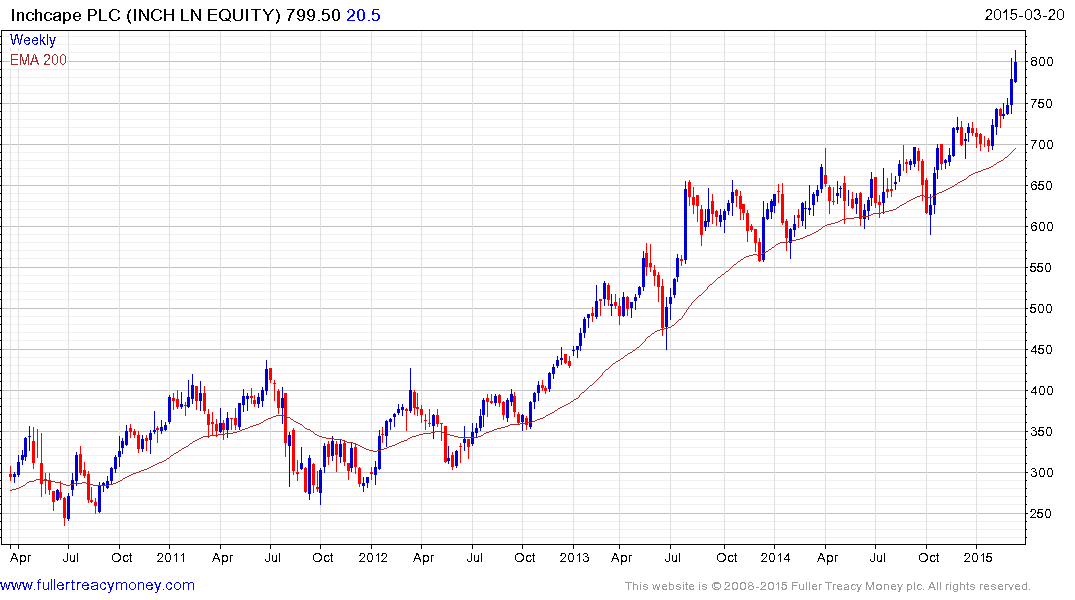 As a purveyor of luxury cars internationally, Inchscape is likely benefitting from the outperformance of automakers. 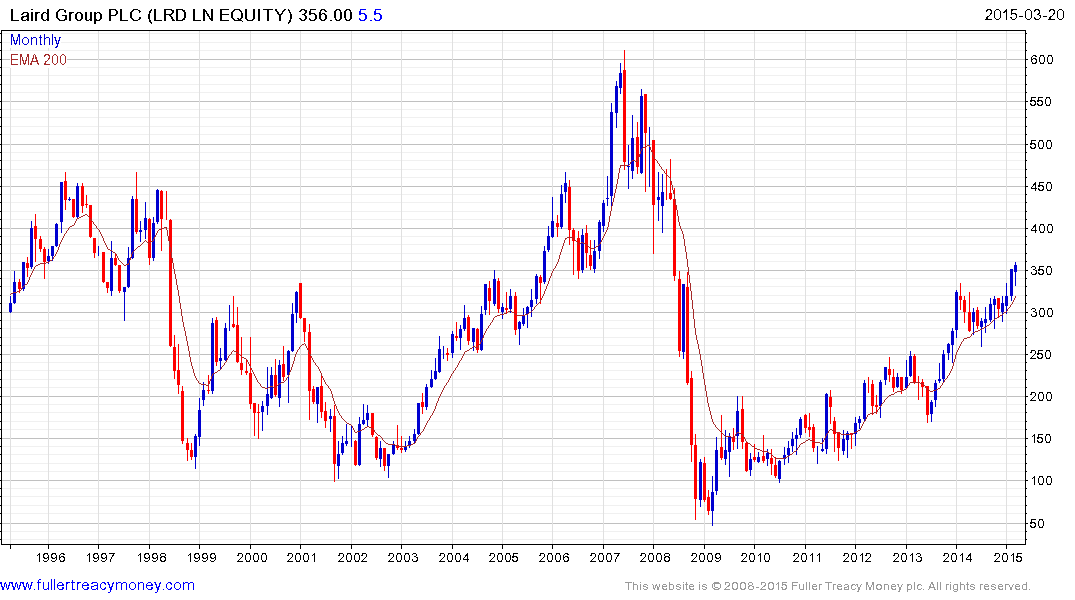 Laird Group represents a UK listed play on the Internet of Everything and broke out to new 5-year highs last week. 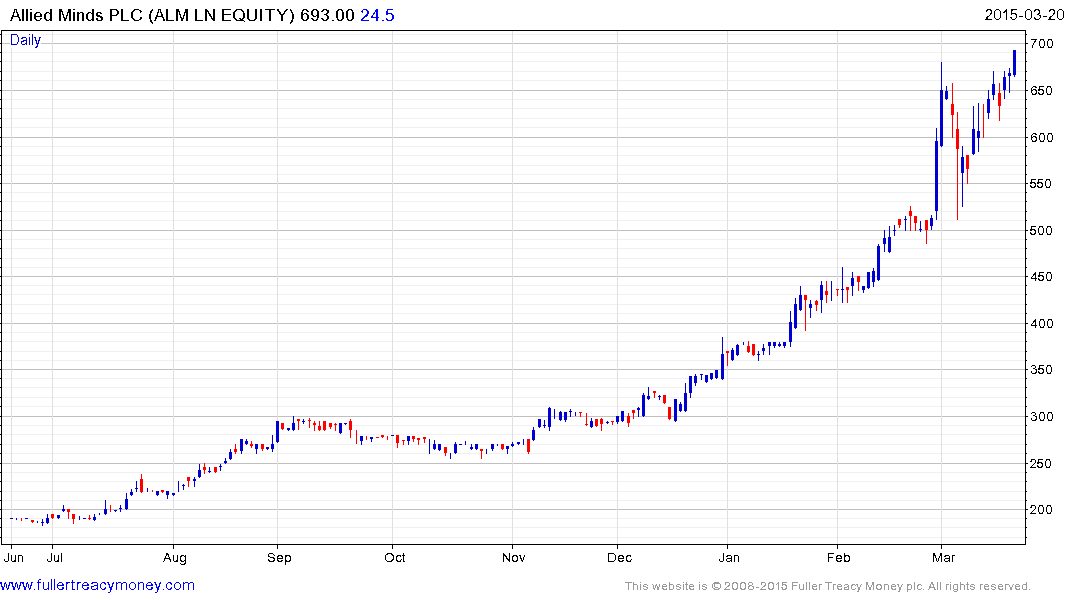 Allied Minds, which funds start-ups, continues to extend its uptrend.