Reserve managers a big negative for the euro The ongoing decline in FX reserves doesn’t matter for the yen because central banks don’t own Japanese assets. In contrast, the euro is the world’s second major reserve currency and the drop in EM reserves requires ongoing EUR/USD selling to maintain constant relative FX allocations. Our best estimate of the drawdown in reserves over 2016 is 700bn-1.6trillion on an FXadjusted basis (chart 1), which assuming a 25% euro share is equivalent to 200-400n of euro selling.

Europe is not Japan
When risk-aversion hits the JPY strengthens because the Japanese repatriate foreign assets. Risk-off causes some euro short covering, but the key difference with Japan is that Europe’s international investment position is still negative. This means there are still more foreigners invested in European assets that Europeans offshore, reducing the positive flow impact on the EUR. Europe’s negative international investment position is a key component of our Euroglut hypothesis of persistent outflows, and the latest Eurozone data released last week show 500bn annualized outflows in the last quarter of last year, another record high.

The US Dollar has attractive characteristics that give it a medium-term tailwind the Euro just does not have. Therefore while the Treasury might not be happy with the strength of the Dollar, the Europeans need a weaker currency to help deal with the continued weakness of internal demand. 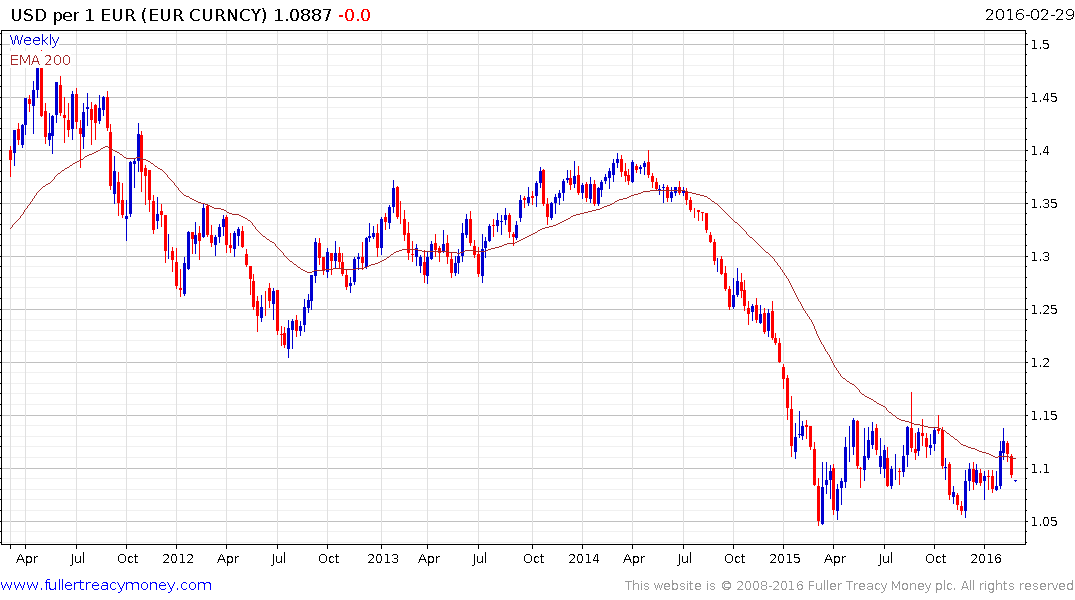 The Euro had rallied back to test the higher side of its range evident over much of the last year and is now falling back towards the lower side. A clear upward dynamic will be required to check the slide while a sustained move above $1.15 would be required to break the medium-term downward bias.