Even when countries appear to have prudent fiscal policies according to short-term government borrowing and debt metrics, they are normally building up future commitments that do not appear on the government’s balance sheet and will not involve actual cash payments for decades.

For example, if the government borrows £50,000 to pay the salary of one extra teacher this year, then that additional indebtedness will be clear to taxpayers and securities markets alike. But, if the government makes a commitment to pay future pensions that have a present value of £50,000 and which involve exactly the same future cash flows as servicing the debt issued to finance the additional teacher, there will be no additional borrowing recorded.

?In this IEA Research Monograph on inter-generational accounting, the author, Jagadeesh Gokhale, points out that existing metrics of government debt are entirely backward looking. If a government has accumulated debt of 85 per cent of national income, that simply tells you something about past cash flows. The figure tells you nothing at all about those commitments the government has made that involve future cash flows. If a private insurance company promised to pay out £3 billion of annuities over the next 30 years and did not include them on its balance sheet, it would be closed down. Yet this is precisely how the government does its accounting.

I intentionally juxtaposed this report with the above video expressing an optimistic outlook for the global economy. The challenges represented by government debt are non-trivial to put it mildly and the resolution of this issue will in many respects be dependent on how well we achieve productivity growth over the coming decades.

Technological innovation fosters social change as we adapt to doing more with less. In a similar way, debt has a social aspect in how it affects government policies. There is a chicken and egg aspect to how we might think of this issue. Will society at large come to the realisation that work is a worthwhile exercise quite apart from the monetary compensation aspect because we are enjoying longer, healthier, more productive lives or because we are forced to work longer by the withdrawal of social benefits? I suspect we are already seeing both these outcomes evolving. 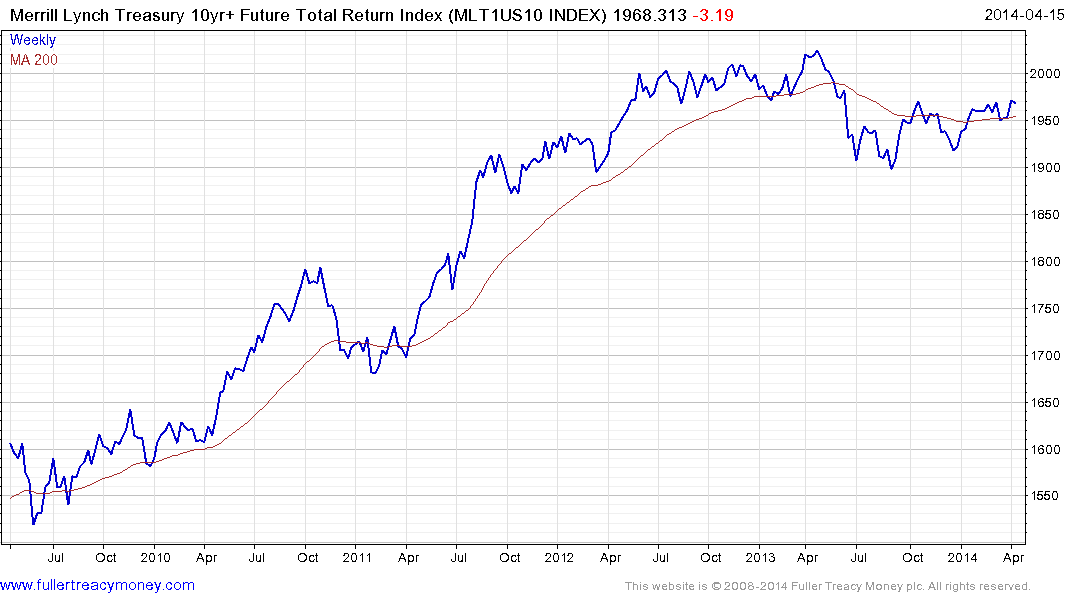 The Fed’s quantitative easing replaced yield with a reliance on capital appreciation in the calculation of total return in the bond markets. Tapering has reduced the appeal of Treasuries for momentum traders and total return has suffered at least in part as a result. The Merrill Lynch 10-yr+ Total Return Index lost momentum from 2012, failed to sustain a breakout from a range for the first time in its history a year ago and continues to range below the psychological 2000. A sustained move above that level would be required to begin to question top formation development.

This article by Robert Barbara which appeared in the Financial Times was kindly forwarded by a subscriber and highlights the fact that a combination of growth and a gradual rise in borrowing costs should deflect the worst case scenario many fear and represents what I regard as the most likely medium to long-term scenario.