What can the Fed do? For one, at their next policy-making meeting in mid-March, officials could slightly bump up the interest rates the central bank pays on bank reserves (currently 0.10%) and on its borrowings in the repo market (currently zero). A slightly higher floor on such rates might help prevent other short-term rates, such as yields on Treasury bills, from going negative. There’s precedent for such a move: The Fed has made technical adjustments to these rates before in order to ensure that the federal funds rate stays within the Fed’s target range.

Beyond that, the Fed should extend its temporary exemption of bank reserves and Treasury securities from leverage-ratio calculations (the initial exemption, granted last spring, is set to expire in March). I would even recommend going further and exempting bank reserves permanently. This would help solve a problem that arises when the Fed buys securities to stimulate the economy: Its purchases cause reserves to increase, bringing banks closer to the point where the leverage ratio requirement binds and forces them to curtail lending. When this happens, it undermines the Fed’s stimulus efforts. To ensure that the exemption wouldn’t reduce the amount of capital required to be held by banks, the leverage ratio and other capital requirements could be adjusted upwards.

Granted, the Fed might have a hard time selling such a move to other financial regulators, which don’t share its monetary policy mandate. But it would be the right thing to do, eliminating the inherent conflict between the Fed’s quantitative easing and bank leverage limits. Under the current regime, the Fed is adding accommodation with one hand, and taking it away with the other. That’s a strange way of doing business.

The repo market is more than capable of sparking unwelcome volatility and the conditions for negative money market rates are growing. Some form of action will be required. Doing nothing will only exacerbate the problem. I suspect the Fed would much prefer removing inhibitions on bank liquidity than any form of interest rate hike regardless of how technical it would be. 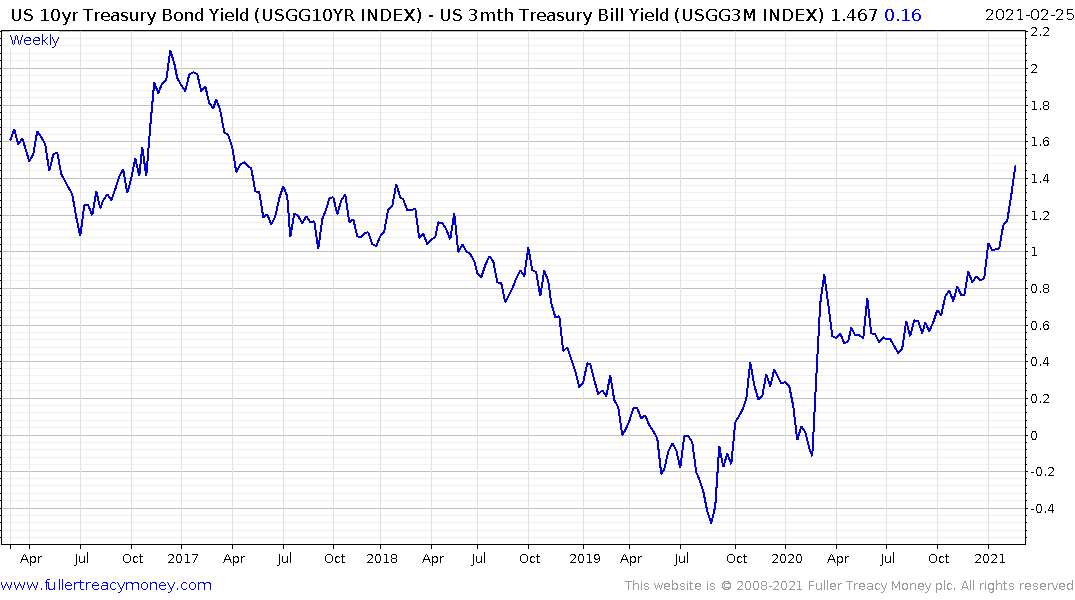 This helps to highlight the Fed has challenges at both the long and short end of the curves. The yield curve spread continues to expand. The more sensitive 10-year - 3-month spread has jumped by almost 200 basis points in the last 18 months.

The time when the yield curve surges higher following an inversion is usually when the most selling pressure takes place. The recovery usually takes place after the spread peaks. There is nothing normal about the current situation but there is no doubt that higher yields pressure highly leveraged companies. 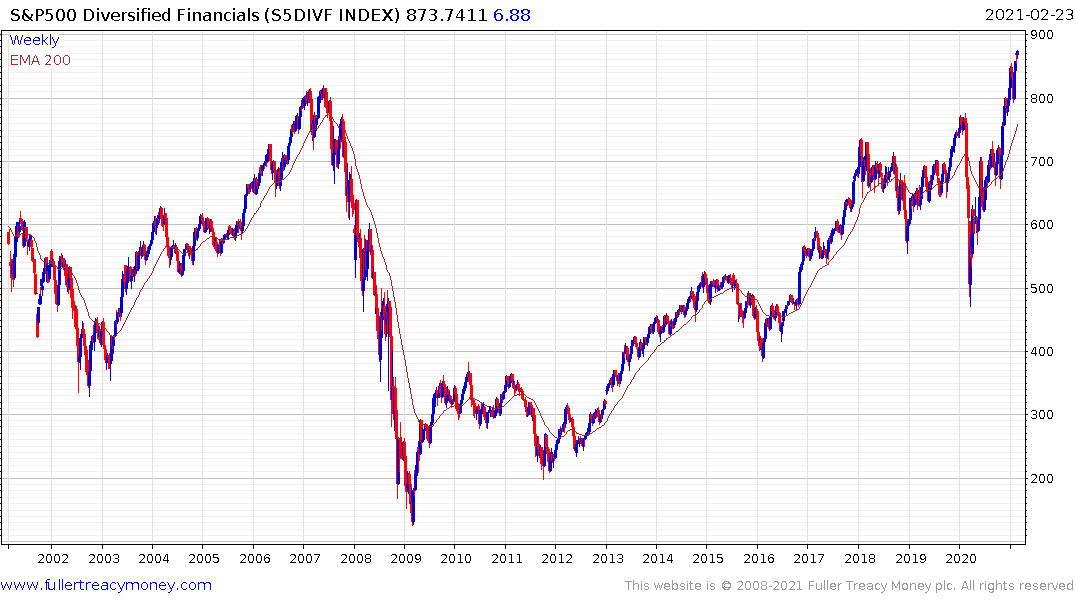 At the same time, it represents an additional tailwind for the financial sector. Banks do well when liquidity is buoyant, the yield curve is steepening and prohibitions on their business models are weakening. The S&P500 Diversified Financials Index is due some consolidation following the breakout to new all-time highs. 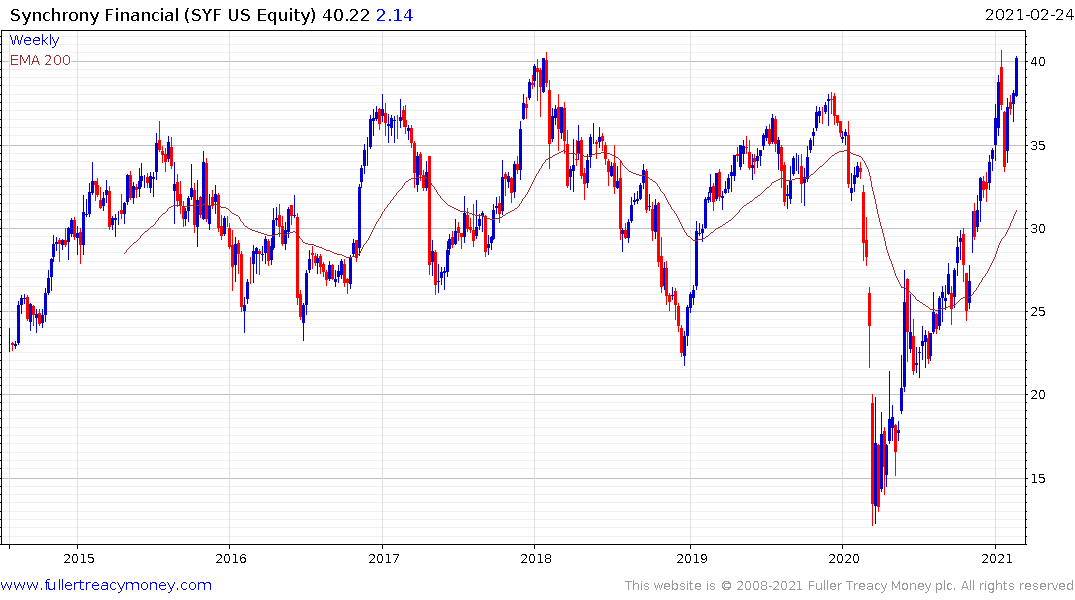 Synchrony Financial (the rump of GE Capital) appears is paused in the region of the highs.

The Value/Growth ratio continues to build support following last year’s collapse. Value valuation models only make sense with a discount rate. As long as bond yields continues to rise that should be positive for the kind of strong balance sheet companies that typically represent value. 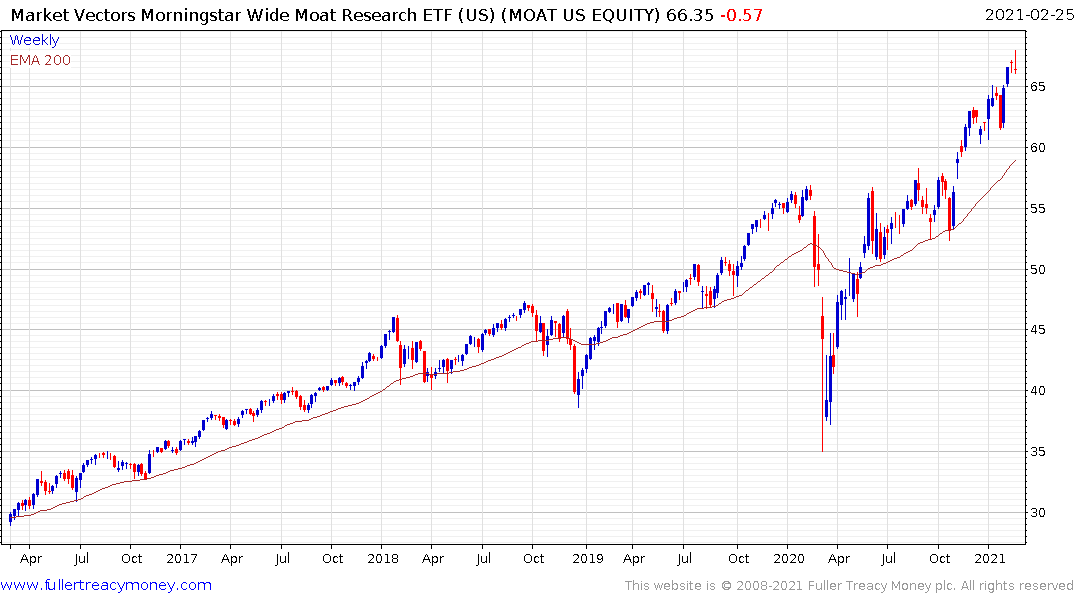 The VanEck Vectors Morningstar Wide Moat ETF is an additional contender for continued outperformance since the companies rely less on interest rates and more on the strength of their competitive position to boost returns. A reversion towards the mean would represent a potential entry point.

The flipside of that argument is the highly leveraged companies which characterise new technology are very susceptible to additional pressure. We saw some evidence of reflexive dip buying over the last few days but for the rebounds to remain credible this week’s lows need to hold.