The Commodity Manual by Eoin Treacy

Cattle on feed data partially vindicates last week’s stampede. Cattle markets locked limit-down early in the week as participants squared positions ahead of Friday’s Cattle on Feed report in the face of weakening slaughter data and concerns over potentially improving seasonal feeder cattle supply. The feeder cattle contract, which has outperformed live cattle by 1100 basis points YTD, lost 4% in the first three days of the week before recovering slightly on Friday. Live cattle faced a similar, though shallower decline, ending the week down less than 1% WoW. Friday’s data largely justified the bearish move, with Dec 1 feedlot inventories rising 1.4% YoY vs consensus expectations of a 1.2% increase. Some may read this report as more bearish for live cattle than for feeders, as an 11.1% decline in marketings YoY (vs consensus expectations of just a 9.8% decline) indicated continued weakness in slaughter demand. Meanwhile placements down 4% YoY (vs consensus predictions of a 3.4% decline) could be read as a sign that feeder supply remains challenged. However, we see the weakness in placements as signaling poor demand from feedlots rather than supply constraints. Average placement weights set a 5+ year high in Nov, signaling that ranchers are still holding back cattle to raise them to higher weights, artificially inflating prices. With high feeder cattle prices keeping feedlot margins under pressure and slaughter demand prospects weakening, feeder cattle prices may need to weaken further relative to live cattle to increase the flow of feeder cattle onto feed as winter reduces grazing options.

Cattle prices have been among the best performing commodity contracts this year. Part of the reason for this was that the 2013 surge in grain and feed prices advanced the slaughter schedule resulting in a smaller herd and an inability to increase supply in 2014. Against this background demand has been relatively stable. 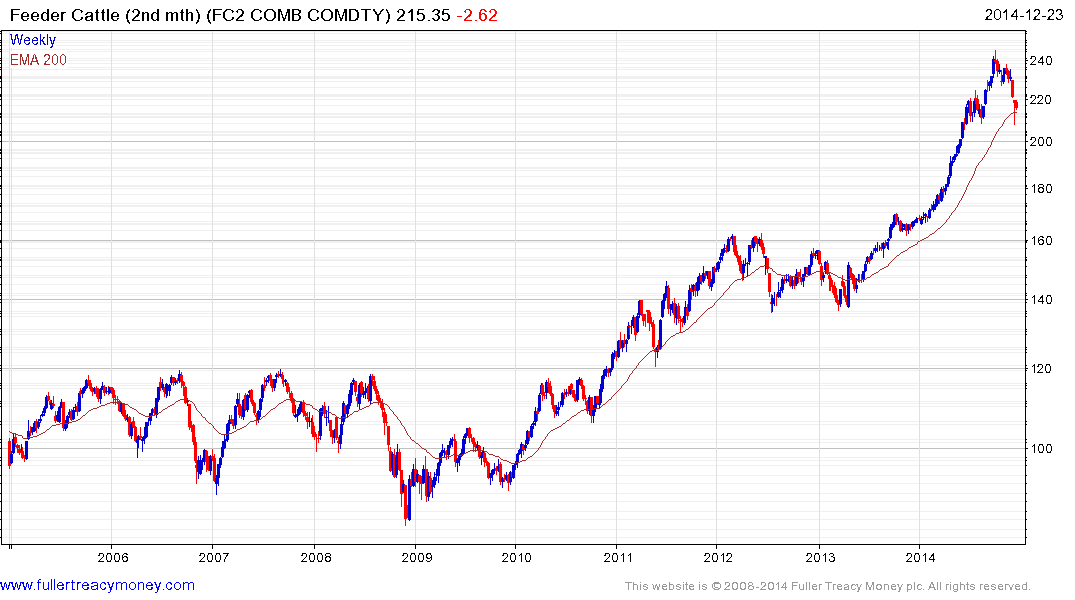 A look at a long-term chart of cattle pricing highlights its cyclical nature. What has been different about this move has been its size and longevity which can at least be partially explained by rising feed and energy costs as well increasing demand from the global middle class.

However as ever, the cure for high prices is high prices. At current levels farmers who have been holding back stock, in order to fatten them up, will be looking at prices closely. Additional weakness will bring some of that withheld supply back onto the market. The futures curve is now only in backwardation between the 1st and 2nd months, it has returned to contango if one looks further out. 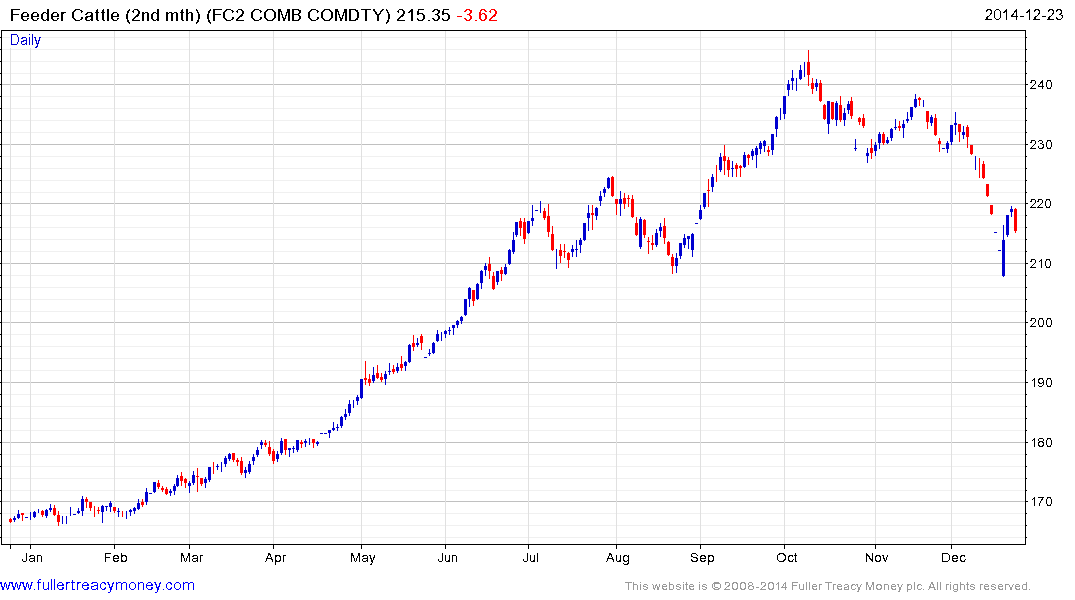 Feeder Cattle rebounded from the region of the 200-day MA last week, following its largest pullback in at least two years. The low near $217 will need to hold if medium-term top formation completion is to be avoided.

McDonalds has been ranging for nearly three years but is currently bouncing from the $90 area and a sustained move below it would be required to question current scope for additional higher to lateral ranging.