The Big Picture by Eoin Treacy

In the US, we expect a more restrictive monetary policy to push equity valuations lower, while political gridlock and trade tensions will likely be a source of volatility. We revise our S&P500 target for end-2019 slightly upward as the SG economics team has ‘postponed’ the US recession by two quarters. Factoring in a mild recession in the US in early/mid 2020, our valuation model indicatives that the S&P500 could dip to 2400pts by end-2019 and come out flat in 2020 overall. We would expect the market to bottom some time in 2020.
​
A potential rebound in the eurozone economy after a series of disappoint quarters, the end of trade tensions and/or a Brexit deal could support eurozone equity valuations in early 2019. However, upside  would likely be limited as earnings momentum has now entered negative territory. Looking to the second half of the year, an ECB rate hike in September would be a source of volatility and push the EUR and the cost of debt higher. In the UK, our base case scenario is for a Brexit deal with the EU, but the subsequent strengthening of the GBP would be a headwind for an FTSE100 index full of exporters.

While expect Asia equities to recover in 2020, 2019 could be another challenging year due to an extended growth slowdown in China, a bear market in tech hardware and a correcting US equity market. A ceasefire in the US-China trade conflict is the upside risk. Our market picks in the region are Japan (inflation rising), China (valuation) and India (earnings).

By this stage subscribers much be wondering why I am posting so many reports that express a bearish view. The simple fact of the matter is I am reposting these reports in an effort to highlight the fact that the last time my inbox was so filled with bearish reports was in the immediate aftermath of the credit crisis.

It seems that the one thing every analyst has learned from the credit crisis is to be hyper alert to any sign of trouble lest they miss out on calling the next big decline. It occurs to me that the investment community is falling into the trap of fighting the last war all over again, even though we are now in uncharted territory in terms of both monetary policy and the quantity of debt outstanding.

Just because there is a tendency to jump at shadows there is no reason to ignore the fact the medium cycle is maturing. Subscribers will be familiar with my view this is occurring within the context of a secular bull market suggesting significant drawdowns will be buying opportunities. However, it would be unusual to see a major peak when so many people are predicting it. You can’t have a peak if everyone is already holding cash. That’s usually a casus bello for contrarians to get active. 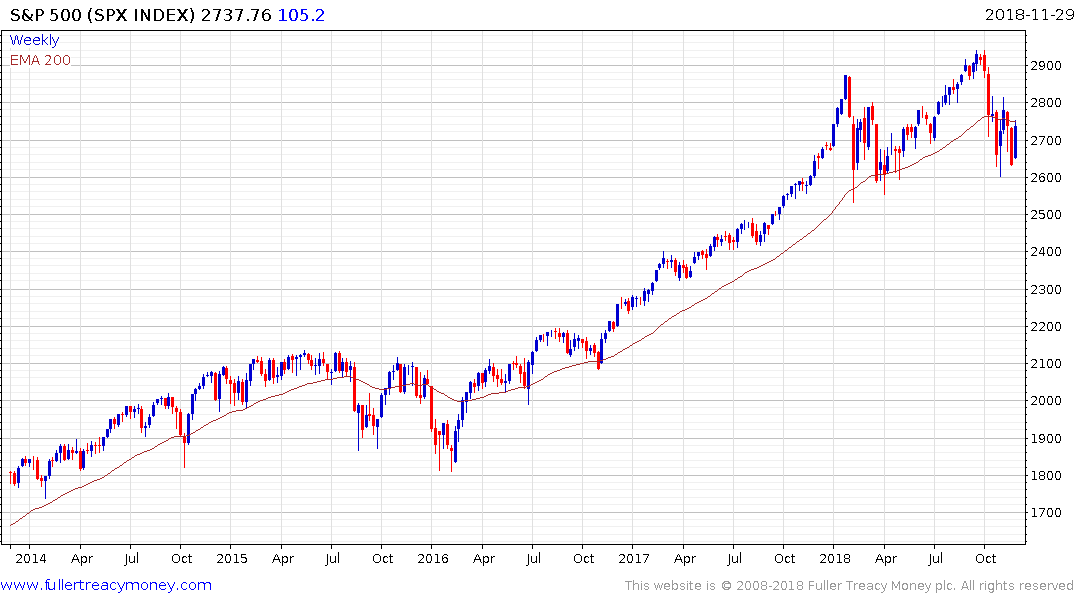 The big question for Wall Street right now is the extent to which the S&P500 can continue to hold its progression of higher reaction lows and then sustain a breakout from this range. That is likely to be heavily influenced both by the trajectory of monetary policy and the outlook for trade relations. 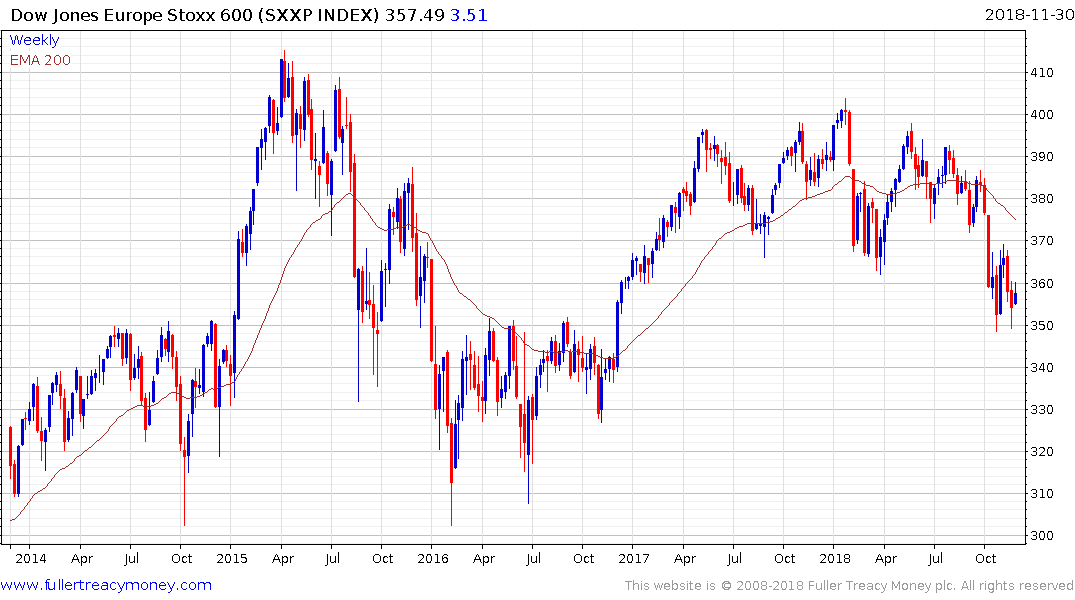 The Europe STOXX 600 Index continues to exhibit supply dominance and is pulling back from the upper side of its 18-year range. 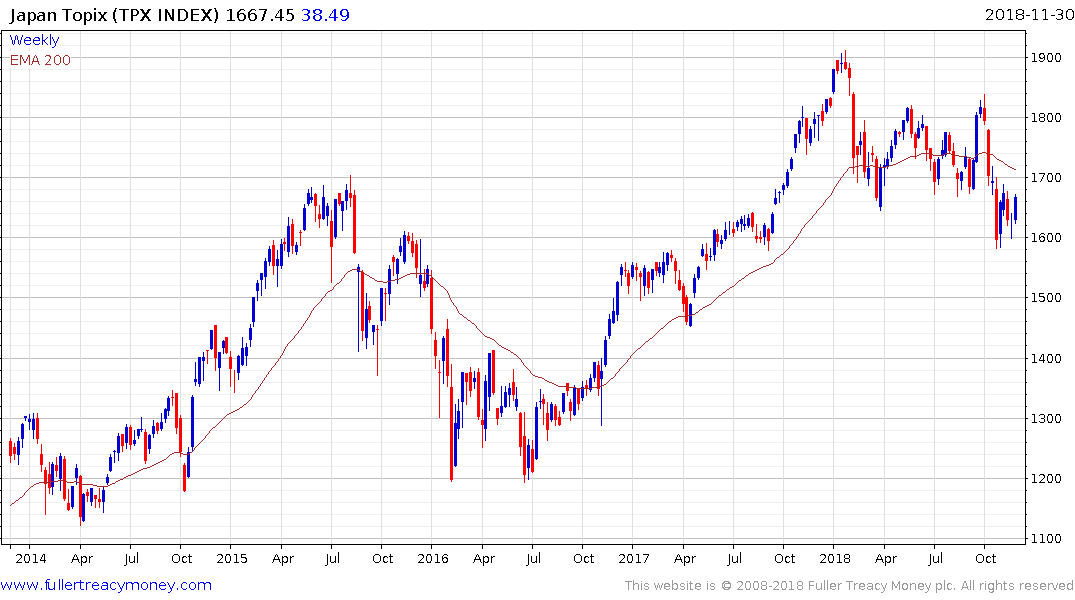 The Topix Index popped above the psychological 1850 earlier this year and dropped back into the range in February. It needs to sustain a move back above the trend mean to confirm a return to demand dominance. 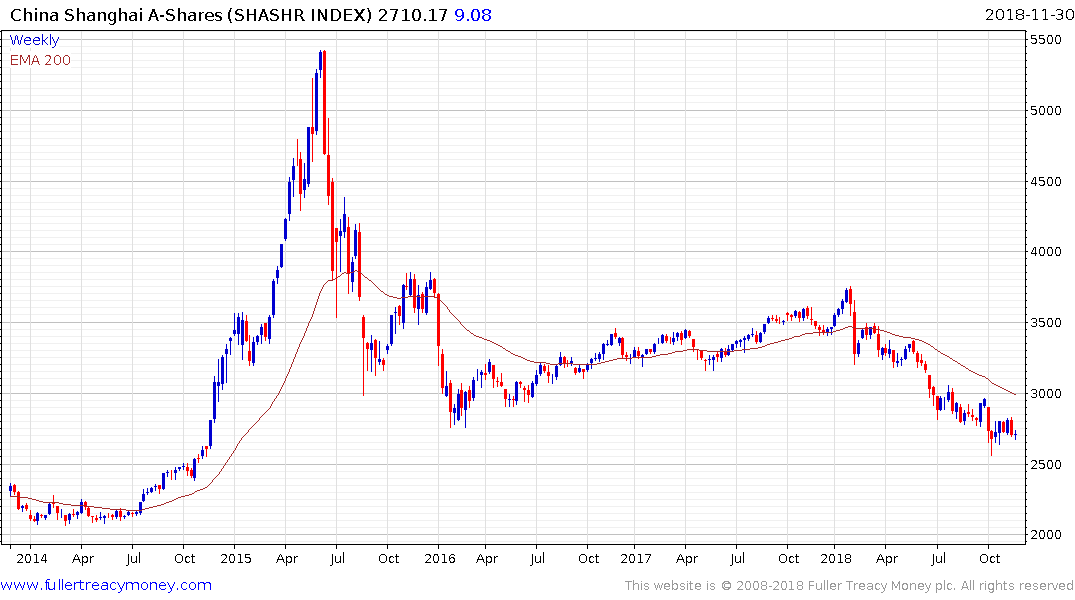 By contrast China’s market is trendless and subject to acute bouts of volatility and trends when they arise tend to be state sponsored.

These four charts highlight the outperformance of the US economy remains a significant factor and it would be rash to call a top until we see clear evidence of a roll over. Meanwhile emerging markets outside of China are increasingly giving signs the worst of the selling is over.