“Many states will pick up on those details and incorporate them into their own regulatory regimes,” said Eric Citron, an attorney who represented South Dakota. He said he expected nearly every state with a sales tax to move legislation or regulations to enforce collections. “Complete compliance will become the norm within the next year or two,” he said.

Amazon originally set up its business model to avoid state sales taxes, limiting its physical presence to a handful of warehouses. But it changed strategy to build more warehouses closer to consumers as it has relied more on its Prime two-day shipping offer—and started charging sales tax on items it sells directly.

The cost of compliance is rising in just about every sector. Since the credit crisis the burden of regulatory compliance has been a significant headwind for the banking sector and it has changed the nature of how they do business. The UK’s Retail Distribution Initiative resulted in the cost of doing business rising for financial advisors. The EU’s drive to introduce GDPR has seen some company email lists drop from hundreds of thousands to the tens of thousands. Asking online retailers to monitor how much and how often they sell into each state will increase compliance costs regardless of whether tax is then due.

The next effect of these changes has been to disadvantage smaller companies because it is easier for large companies to take on the relative burden. The too big to fail banks are still systemically important and arguably are even more entwined with the global financial architecture now than before the credit crisis.

The evolution of RDR in the UK resulted in the ranks of independent IFAs shrinking even as Hargreaves Lansdown business surged as platform operators benefitted.

GDPR means smaller companies have to completely rebuild their internal marketing resources which is likely to be a benefit for the large incumbents like Google and Facebook.

Mrs. Treacy’s Amazon business is growing at more than 30% a year after year 1 and she took up the offer to sell in Canada about 18 months ago. Amazon does not collect sales tax in Canada but sellers are required to make a Canadian tax return since they are exporting into the country. Amazon provides sellers with a tax invoice for the shipping costs incurred which can then be netted off against the sales tax owed but this has to be done for each of the provinces and territories. The cost of compliance represents a significant drag on time and money which raises the question of whether it is even worth it.

Canada is a small market compared to the USA. It is to be expected that if Amazon sellers have to collect sales tax from each of the USA’s states, where applicable, then it will provide an all-in service. eBay does not sell its own products and relies exclusively on third party sellers. It is already campaigning against the Supreme Court decision but it is definitely a relative loser in this debate. 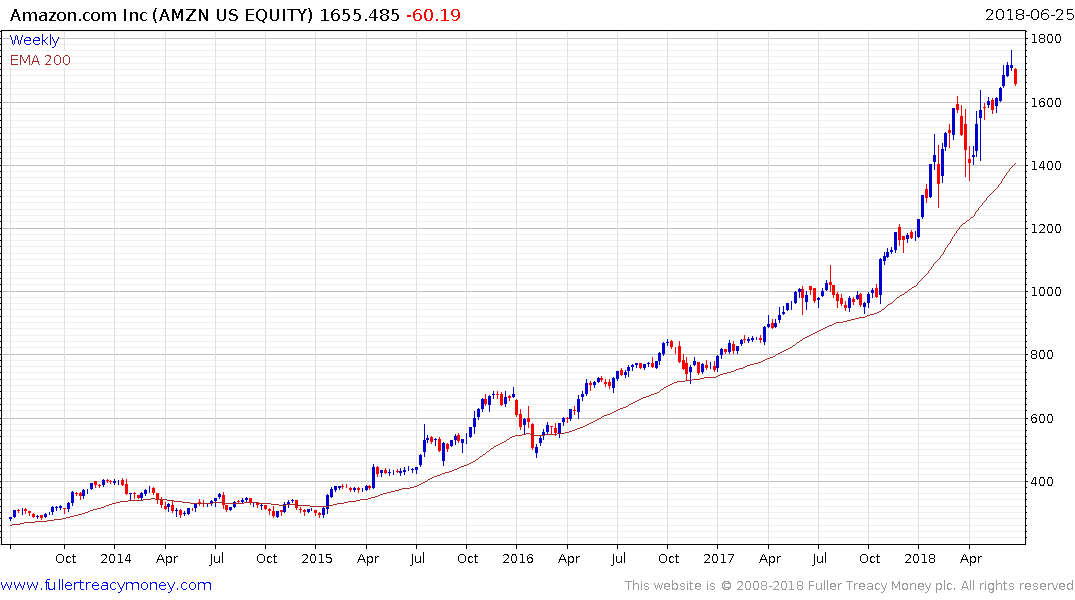 Amazon is susceptible to mean reversion following an impressive rally from the April lows. 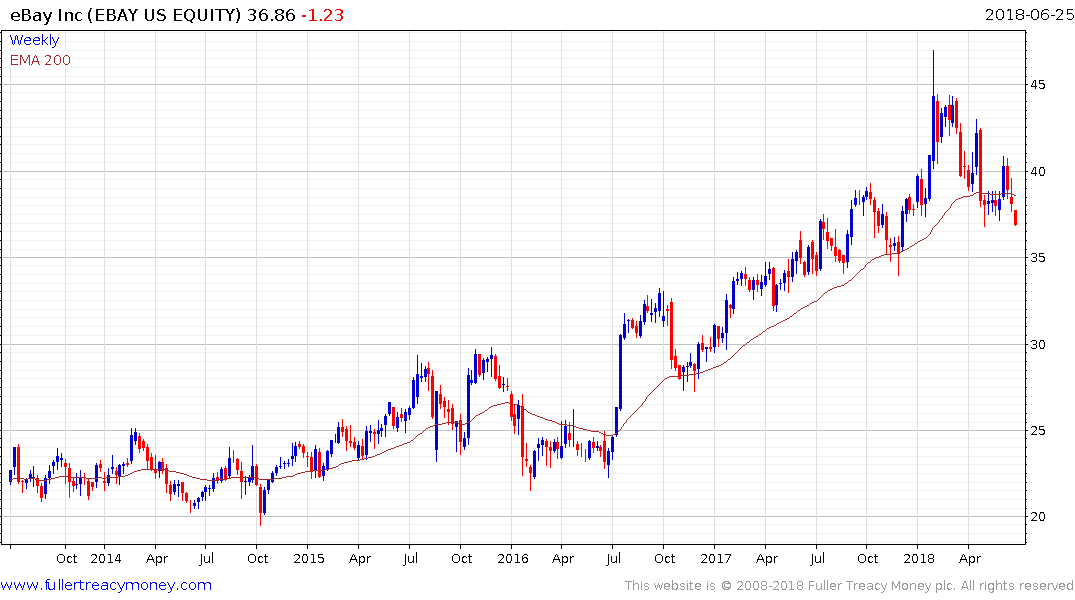 eBay is back testing its progression of higher reaction lows and will need to rally soon if medium-term scope for continued upside is to be given the benefit of the doubt. 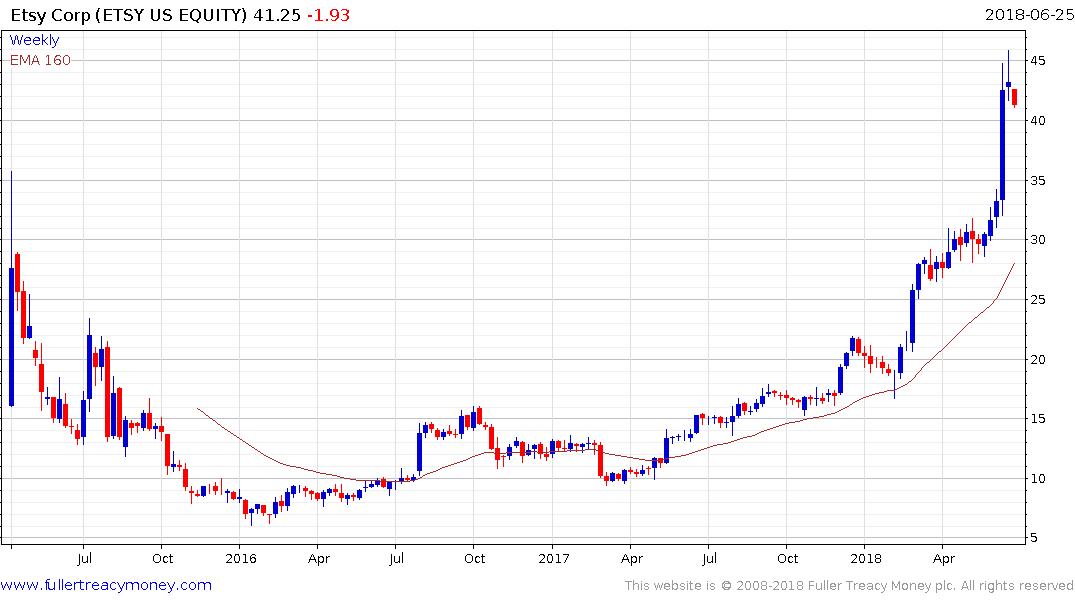 Etsy’s business has turned around over the last year but tax collection is likely to be an issue for its group of individual sellers. The share is susceptible to consolidation following the surge higher three weeks ago. 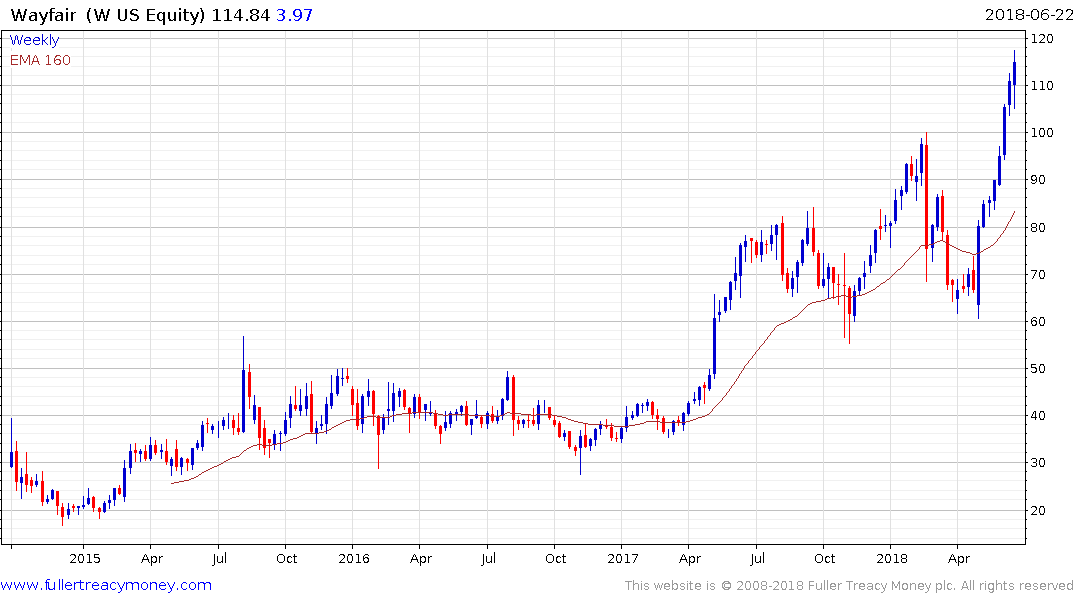 Wayfair is also susceptible to some consolidation.