The imposition of two Government regulations in 2013 aimed at addressing the country’s current account balance, namely : (1) a 10% import duty that has grown from 2% nearly 2 years ago, and (2) the 80:20 rule, requiring 20% of imports to be re-exported before further imports are permitted, have depressed official gold import figures. However, a concurrent spike in imports in surrounding regions suggests heightened smuggling activity into India. With a marked improvement in the current account balance as well as political sentiment ahead of elections in April-May, that may well result in reducing/repealing the 80-20 rule as well as the 10% import duty, a re-emergence of Indian consumer demand in-line with levels observed in the 2010-12 period cannot be ruled out. Spot-premiums in excess of $150/oz observed during 2013 bear testament to the resiliency of underlying demand in the region.

Between 2005 and 2007, we estimate official Indian gold demand averaged between 1.2% and 1.4% of annual GDP and constituted 5% to 8% of annual household savings. 2008-13 however, has seen demand increase, averaging 2.1% of GDP and 9% of household savings (Exhibit 1). Furthermore, Personal Disposable Income has grown at a CAGR of nearly 11% from 2005 through 2012; should this trend continue in broadly similar fashion, the increase in the potential fund-flow that could be directed toward investment in gold is substantial.

?Short term trends also appear favourable: the spike in Gold in June 2013 was due to the sharp sell-off in the Rupee/USD exchange rate and there was no significant destocking of gold. The Rupee has strengthened significantly since its September lows and the Rupee denominated gold price has pulled back ~15% from the September price spike, making this a more attractive entry level for Indian buyers.

A confluence of negative factors contributed to gold’s steep decline last year but the ranging environment that has prevailed for the last six months indicates supply and demand came back into at least temporary equilibrium. ETF demand moving back into positive territory removes a significant headwind from prices while the potential for a relaxation of India tariffs on gold imports could represent a fresh catalyst to spur demand. 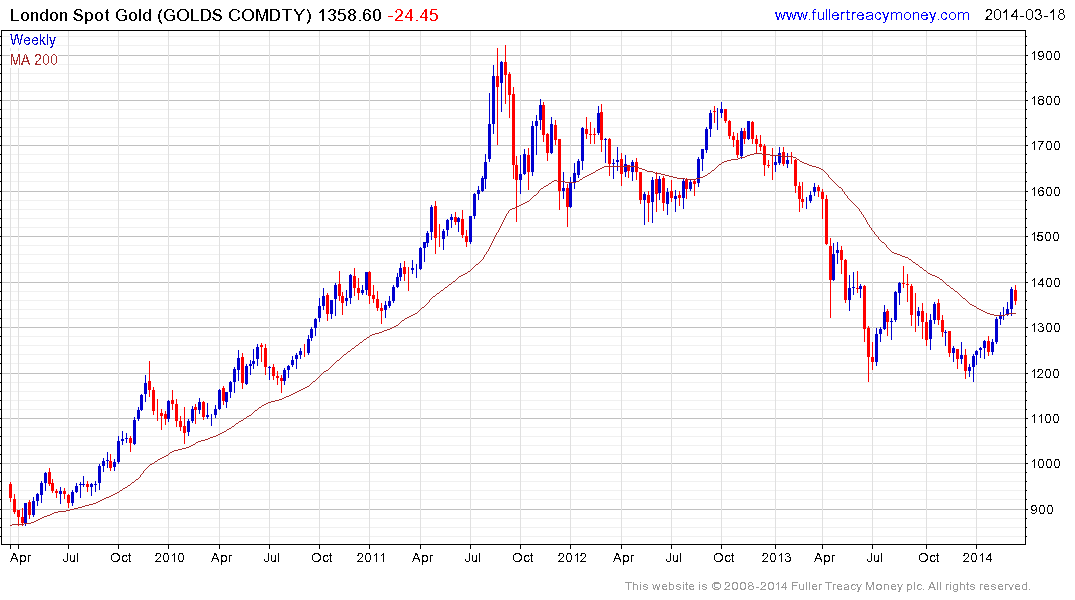 Gold prices retested the low at $1180 in December and have returned to test the $1400 area over the last 10 weeks. Yesterday’s downside key day reversal suggests some consolidation of recent gains is underway. The 200-day MA has recently turned upwards in recognition of the fact that on average prices have been rising and provided prices hold above $1300 during this consolidation, the benefit of the doubt can continue to be given to medium-term potential for additional upside. 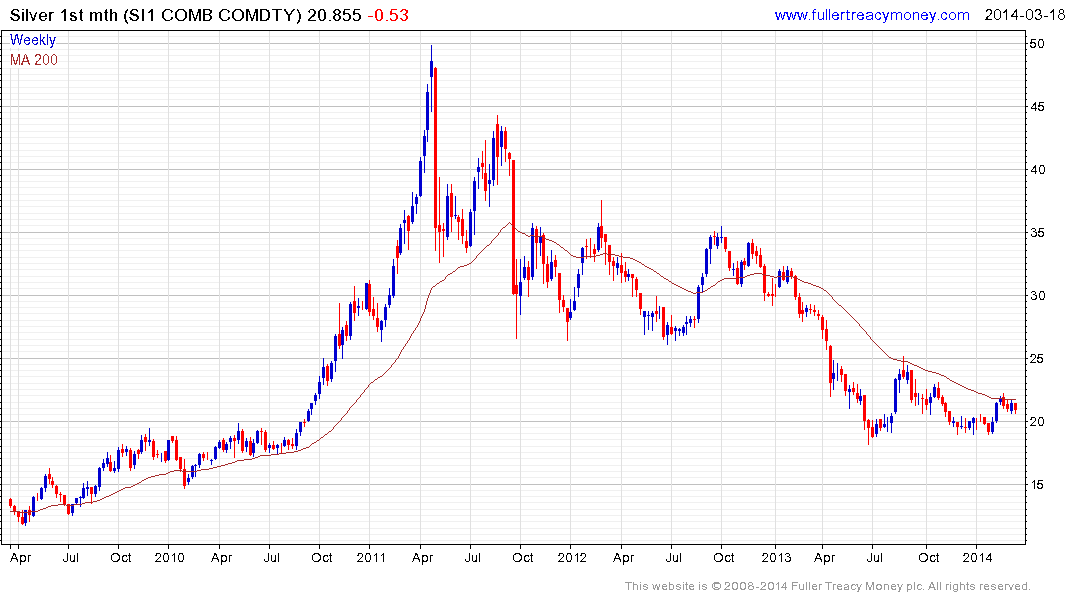 Silver has been a laggard among the precious metals during the last few months and has so far failed to sustain a move back above its 200-day MA. It has found support on two separate occasions in the region of $19 but will need to sustain a move above $21 to confirm a return to medium-term demand dominance.

Both platinum and palladium are subject to political considerations that could, but have not yet, had a meaningful impact on pricing. Platinum has been ranging mostly between $1300 and $1550 for a year and will need to hold above $1500 to confirm demand has returned to dominance beyond the short term. 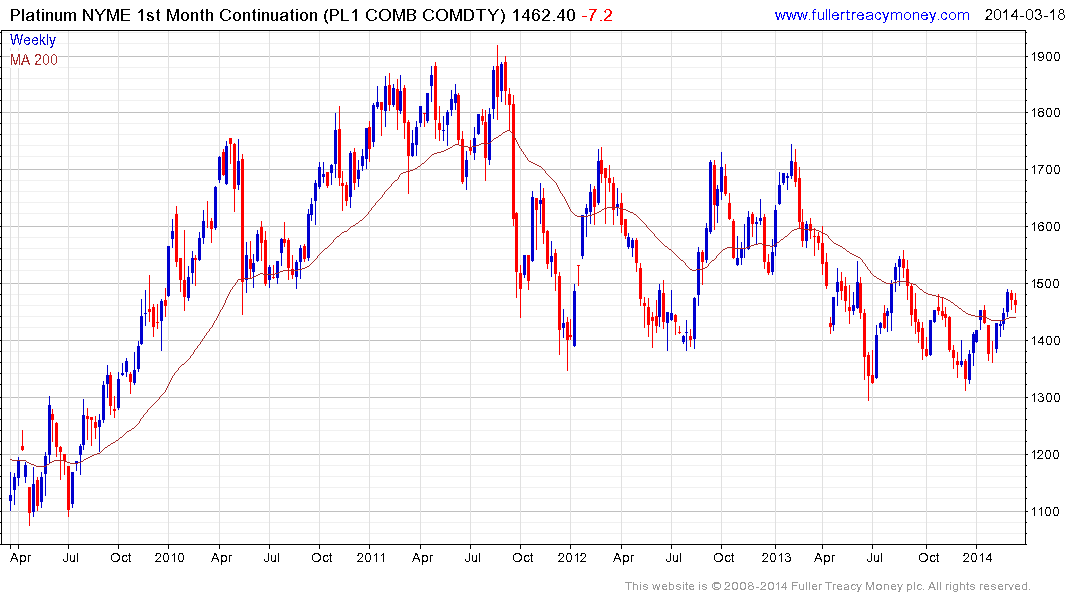 Palladium rallied to break a yearlong progression of lower rally highs two weeks ago and is currently consolidating below the psychological $800 area. A sustained move below $740 will be required to question medium-term scope for additional upside. 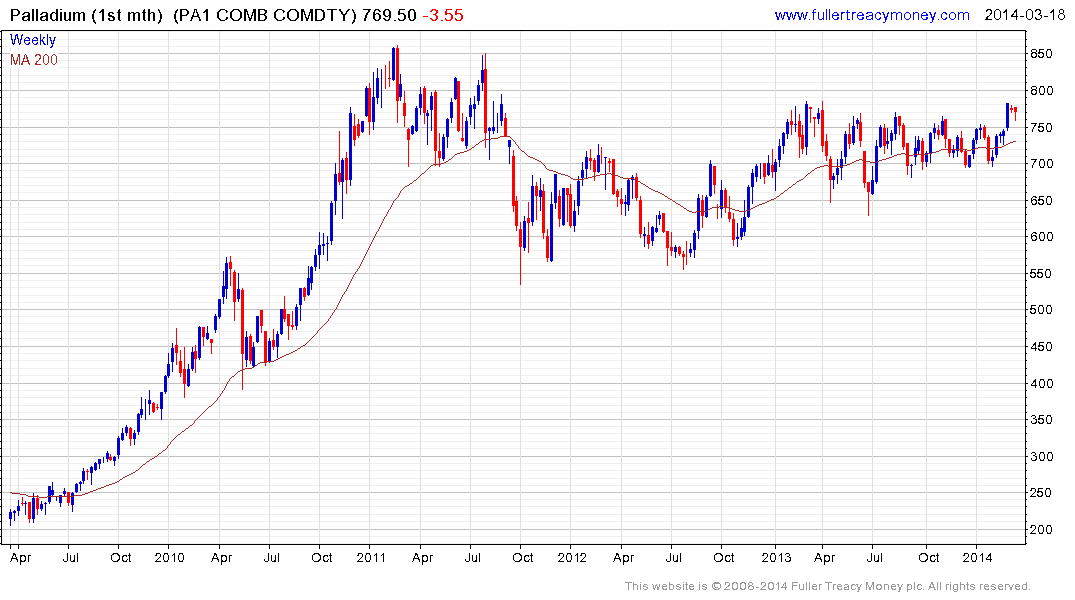