There are a couple of big points that stick out to me. The first is you can’t have a recession without unemployment rising. The second is oil price spikes have a causal factor in recessions over the last thirty years but we need to consider when they are a necessary cause. The third is recessions generally occur following a bubble in something. That sector represents the epicentre of risk and is most likely to collapse when the music stops.

Unemployment continues to trend lower and that is a good thing. Work and individual productivity is a powerful motivator. It makes sense that wage demands should increase in the mature economic expansion and fall during a recession. In fact, they should be at least a coincident indicator or possibly a lead indicator because of the role of sentiment in asking for a pay hike. The long-term chart highlights the fact wages have not tended to exceed 4% for very long during any expansion since the early 1980s.

I have a lot of sympathy with the view oil price surges cause recessions because they are a tax on consumption. The oil price remains in a secular bear market and is likely to range broadly between $40 and $80 for the foreseeable future. In between there will be overshoots in both directions but they are unlikely to be sustained, short of a war knocking out major sources of supply in the middle east.

I wonder though whether oil prices spikes are a necessary condition for a recession. Energy’s contribution to per unit of GDP continues to trend lower on a secular basis. The only way to confirm that energy is less of a factor will be to see a recession without an oil spike. The role of data, its creation, manipulation and exploitation in the economy is now potentially more important than oil. That is not something we are very well equipped to measure but it is no coincidence that data driven companies now dominate the world’s largest companies; usurping energy companies’ position. We can, however, monitor the performance of these companies for signs of contraction and they are holding up reasonably well at present.

One of the more relevant points made in the report is the fact that China’s underperformance has been responsible for the last two “mini recessions” and has been a significant factor in the weak global economic conditions of late. China is running a deficit of over 4% of GDP but has so far been reluctant to provide direct stimulus to the infrastructure/housing/shadow banking sectors. That is contributing to the economic slowdown because those were the primary economic drivers in the past. Therefore, if there anything that could derail the potential for a successful breakout to the upside it is a continuing trend of Chinese economic disappointment. For example, today car sales have contracted for 15 of the last 16 quarters.

The other sector that has to be monitored closely is private equity. Valuations are very high, mutual funds have been allocating increasingly large sums to the sector and are taking losses and investors are souring on IPOs. The Saudi market is about to host the largest ever IPO, in Saudi Aramco, and that signals a clear willingness to cash out. Meanwhile experienced private equity firms have been de-risking for the last few years and retail investors are pouring in via peer to peer lending. Private equity firms have upwards of $2 trillion in dry powder and Warren Buffet alone has more than $100 billion in cash. The time to go from zero to a $1 billion valuation is now measured in months. This sector has bubble written all over it.

The private markets now account for the majority of home loans in the USA, private companies have been major employers in this cycle. Uber alone has millions of people who rely on the company for work. They might not be classified as employees but if they lose their source of income, they will become unemployed fast.

The Fed funds rate is still 25 basis points above the 10-year Treasury yield which is supportive of the view that more monetary assistance is on the way so the benefit of the doubt can continue to be given the benefit of the doubt. However, the two sectors that need to be monitored most closely for further signs of deterioration are China and private equity. 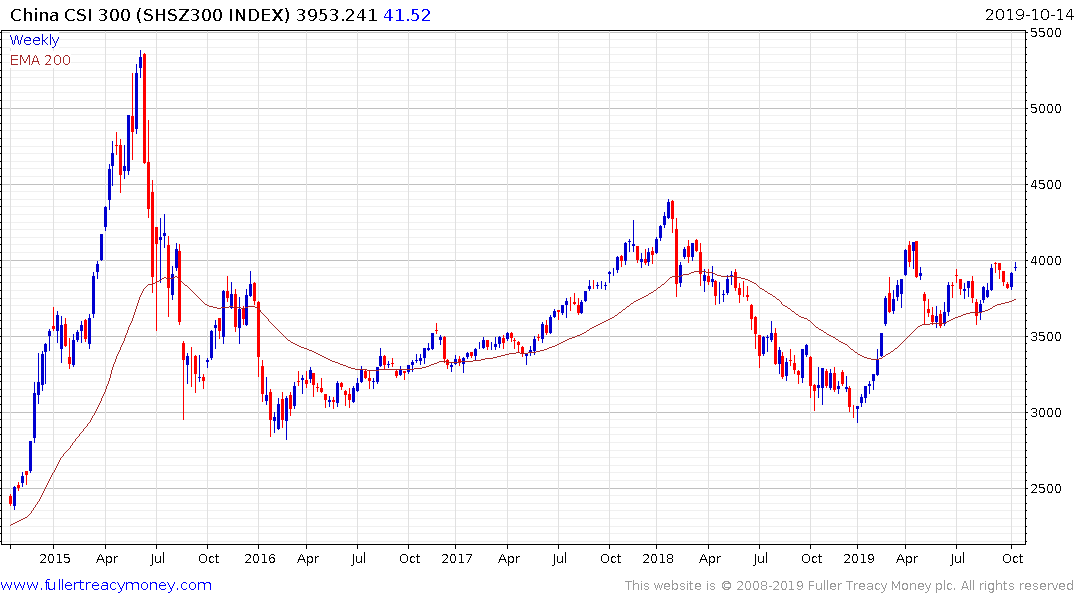 Right now, China is firming from the region of the trend mean following improving sentiment towards the outlook for the trade war.

The Indxx Private Credit Index has been confined to a tight range for much of this year and needs to hold the 1100 level if top formation completion is to be avoided.