Constructive on structural and cyclical growth outlook
Comment of the Day

Constructive on structural and cyclical growth outlook by Eoin Treacy

While the long term structural macro outlook remains unambiguously positive, we think India is also poised for a cyclical upturn in growth, and that the worst of the growth-slowdown, caused by temporary disruption and technical factors related to external trade, is behind us. The economy has already started to stabilize post GST and high frequency indicators are showing a rebound, which should eventually reflect a recovery in July-Sep’17 GDP growth (DB estimate 6.4%). While we expect growth to average around 6.6% during FY18, we are more optimistic about the outlook for FY19 and beyond.

We also note that growth momentum generally improves in the year prior to the elections (India’s next general elections are to be held in May 2019 or earlier), which is likely to play out in this cycle as well. We think given the various reforms that are operational at this stage and that have been implemented by this government so far, it is reasonable to expect growth to return close to 8.0% by FY20, absent any external shock that could jeopardize this baseline outlook.

At a talk I gave for the CFA in San Francisco in 2013 I made the point that rather than comparing India to China it was probably more appropriate to compare India’s development to the UK’s and China’s to the USA. The reason for this was because the USA built its infrastructure and cities on a grid system with clear delineation between public and private responsibilities which to one extent or another China has followed.

On the other hand, the UK’s industrial revolution was pioneered by private individuals building pieces of infrastructure that suited their needs which was then supplemented by the government in the form of direct support and regulation. I’m fully aware this is not a perfect comparison but there are enough similarities to make it useful.

The rollout of 4G to the whole country a year ago is an example of how private enterprise is benefitting from investing in technology, but will also benefit the whole economy by enabling growth and access to the online marketplace for hundreds of millions of people.

The streamlining of state taxes so a national GST could be introduced, the recapitalization of the banks, even the demonetization experiment, all point towards an administration pushing hard to deliver on reforms necessary to drive growth. 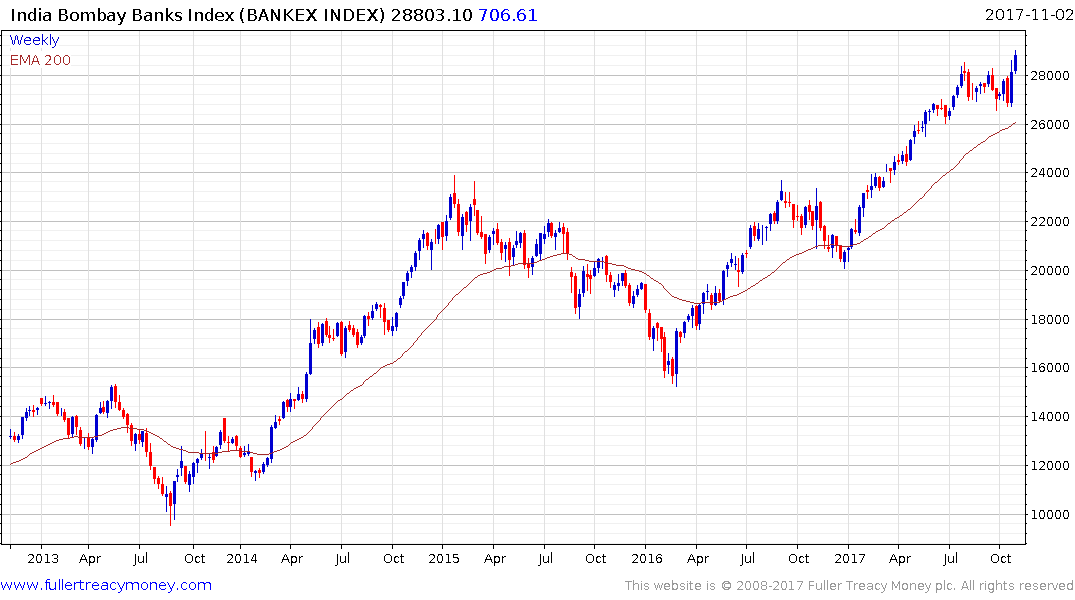 The Bombay Banks Index has been an important short-term lead indicator for the Indian market for much of the last decade but lagged somewhat over the last few weeks. The state-owned bank recapitalization changed that and it broke out of a three-month range this week to reassert medium-term demand dominance.