Away from the debate on whether the recapitalization bonds will – and should – be treated as an ‘above the line’ item in the Budget or not, and hence the optics on the Budget Deficit;

the issuance of such a large quantum over a period of 12 months will pressurize an already weak technical position for the bond markets by detracting from the public sector bank appetite for general government issuance (center and state). The specifics of the recap bonds (whether eligible for SLR, whether marketable etc.) will determine the extent of substitutability between recap bonds and other government paper. Note also the backdrop of recent lowering by RBI of both the mandatory SLR for banks, and the limit on SLR securities held under the HTM category, which should reduce the overall appetite from banks for SLR paper – and in particular for duration. There are two mitigating factors to consider though – a) that the banking system remains flush with liquidity (as obvious in the money parked with RBI) created by the demonetization exercise from late last year, and b) possible reduction in RBI OMO sales given that this recap bond issuance will, at least temporarily, take some surplus liquidity out of circulation. The net sum though, we expect, to still be negative for the demand technicals of the markets. Comes as this does together with increasing likelihood of slippage in deficit for the current FY (unless the government manages to get additional dividends from PSUs) – and likely putting at risk the FRBM Committee recommendation for 3% target for next FY – the technical picture overall points to risk of higher rates and steeper curves still in India. We stay underweight in our exposure to duration.

Indian 10-yr government bond yields contracted from 9.5% in 2013 when the Rupee was among the weakest currencies in the world to lows of 6.2% in late 2016. The yield has broken its downtrend over the last year and a sustained move below 6.5% would be required to question support building. 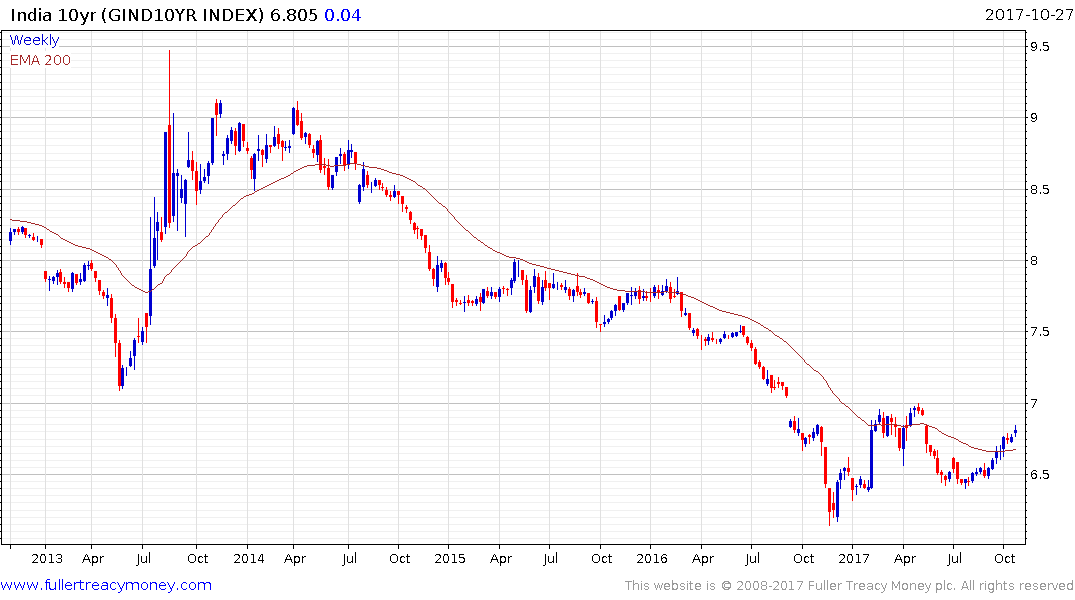 The RBI has been cutting interest rates with the Repo rate now close to 6%. That suggests a reasonably flat yield curve with only a 90-basis point difference between 3-month cash and 10-year bonds. That’s a testament to the taming of inflation over the last few years. Continued stability in the bond and stock markets will likely to influenced by how steady the Rupee is.

The Dollar firmed against the Rupee in September and has so far held the breakout. The last thing India wants to see is an acceleration lower by the Rupee but neither does it want a strong currency. The RBI has a careful balancing act ahead of it because investor sentiment is fickle with international investors sensitive to currency market volatility. 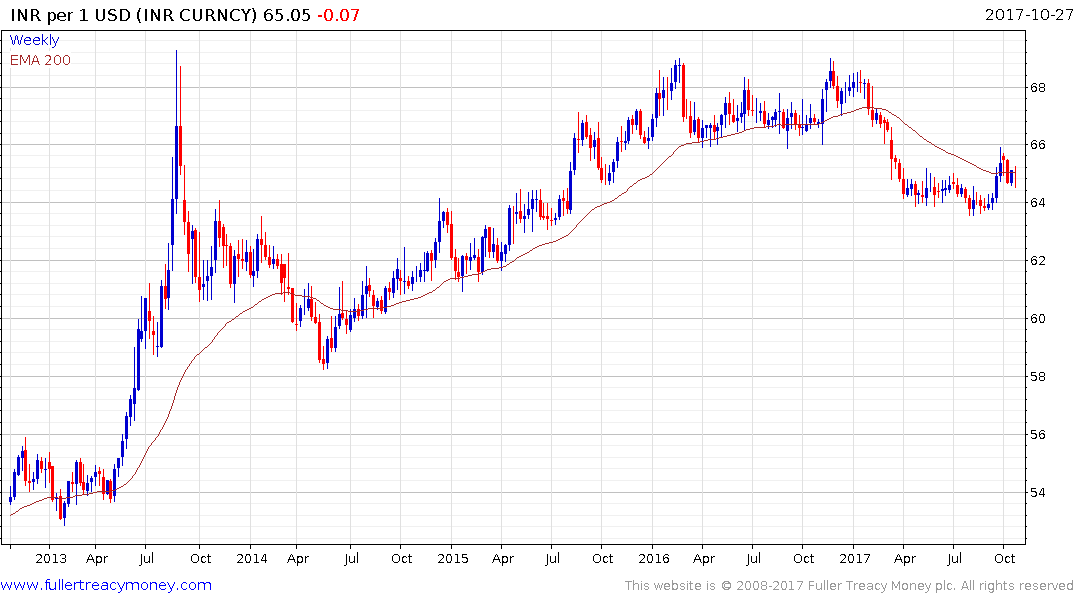