"Our unique material can kill bacteria rapidly and inhibit the development of antibiotic-resistant bacteria," says IBN Group Leader, Dr Yugen Zhang. "Computational chemistry studies supported our experimental findings that the chain-like compound works by attacking the cell membrane. This material is also safe for use because it carries a positive charge that targets the more negatively charged bacteria, without destroying red blood cells."

The team's compound was developed as an alternative to triclosan, a common ingredient in hygiene products like soap and toothpaste which has been shown to aid antibiotic resistance. The team says the new material, which takes the form of a water-soluble white powder, could be a viable replacement in these applications and could be used in alcoholic sprays used for sterilization in homes and hospitals.

"The global threat of drug-resistant bacteria has given rise to the urgent need for new materials that can kill and prevent the growth of harmful bacteria," says IBN Executive Director, Professor Jackie Y. Ying. "Our new antimicrobial material could be used in consumer and personal care products to support good personal hygiene practices and prevent the spread of infectious diseases."

If you had to name one black swan event that could derail the trajectory of global growth it is antibiotic resistance. It’s not a challenge to growth right now but there is an inevitability to the problem which gives urgency to the search for a solution. I’m an optimist so I believe a solution will be found but I tend to read every article I see on the subject because the stakes are high and the potential rewards for both companies and society are very large.

The reality is that our drive to combat diseases and infections is getting increasingly high tech where our ability to tackle bacteria is taking place on a genetic and molecular level rather than searching for new antibiotics. This increases the potential that a solution will be patentable. 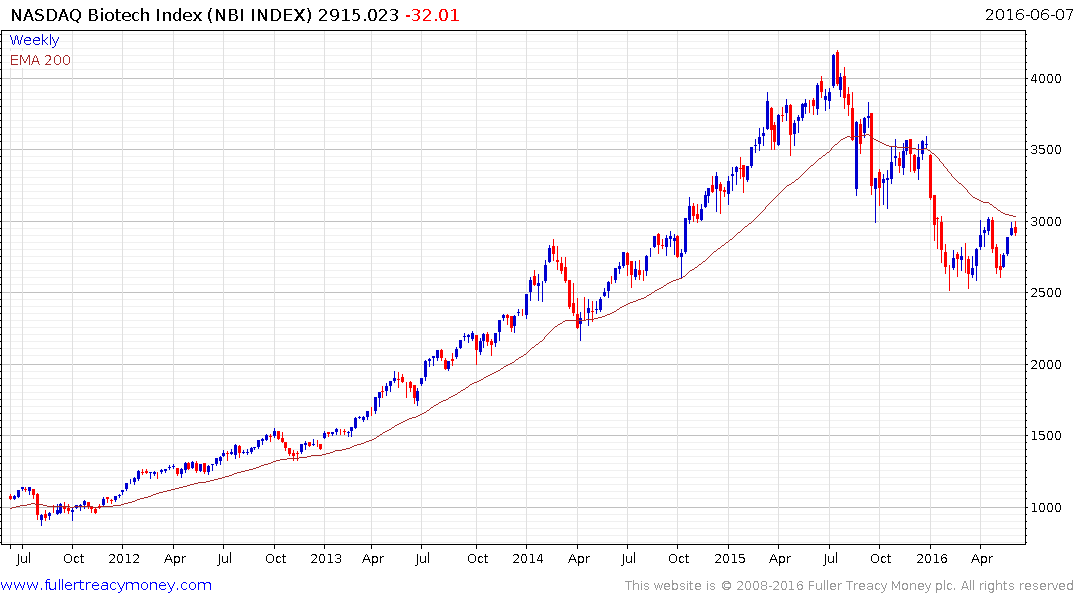 The Nasdaq Biotech Index has been trending lower for almost a year. It has been ranging in a relatively gradually process of mean reversion since January and is now testing the region of the MA. A sustained move above 3000 would signal a return to demand dominance beyond the short term.