Piercing the gloom by Eoin Treacy

China is decelerating – (a fairly consensual view) and this is coinciding with additional production ramp-up as projects started years ago come to fruition. The net outcome is over supply (again, a consensual view) and prices should fall (as they have done). A risk is to use pre China boom commodity prices as a guide to the future, because this is too bearish as many commodity prices hit century lows in the early 2000’s. Iron ore hit an annual low in 2002 for instance at US$36/t (real CIF) – so market fears of sustained iron ore prices of US$30-40/t would require iron ore to retrace to century low levels, into perpetuity. We do not think this is likely. Meanwhile, a number of the miners offer good value on their existing assets alone at normalised prices, the potential growth upside and high yields justify buying them – on top of that, dividends are both attractive and maintainable into the foreseeable future. Now is a good time to selectively pick up some value, in our view.

Investment in new green field projects has stopped and is unlikely to become a significant factor until there is evidence metal prices are tending higher. Having embarked on developing new mines, companies have little choice but to complete the projects and these sources of supply continue to come to market. This situation favours lower cost, more established companies.

There is an important difference between Chinese demand growth and absolute demand. As a major economy, per capita demand has increased substantially over the last decade. A great deal of mine expansion was predicated on the trend of demand growth persisting indefinitely. The pace of growth has moderated considerably but there is no evidence it has reversed. Any major economy has an annual consumption rate for industrial resources. Generally speaking, commodity bull markets don’t end because demand decreases. Rather supply increases to overwhelm demand. This is exactly what we have seen happen and a new demand growth model will have to evolve in order to change the environment. 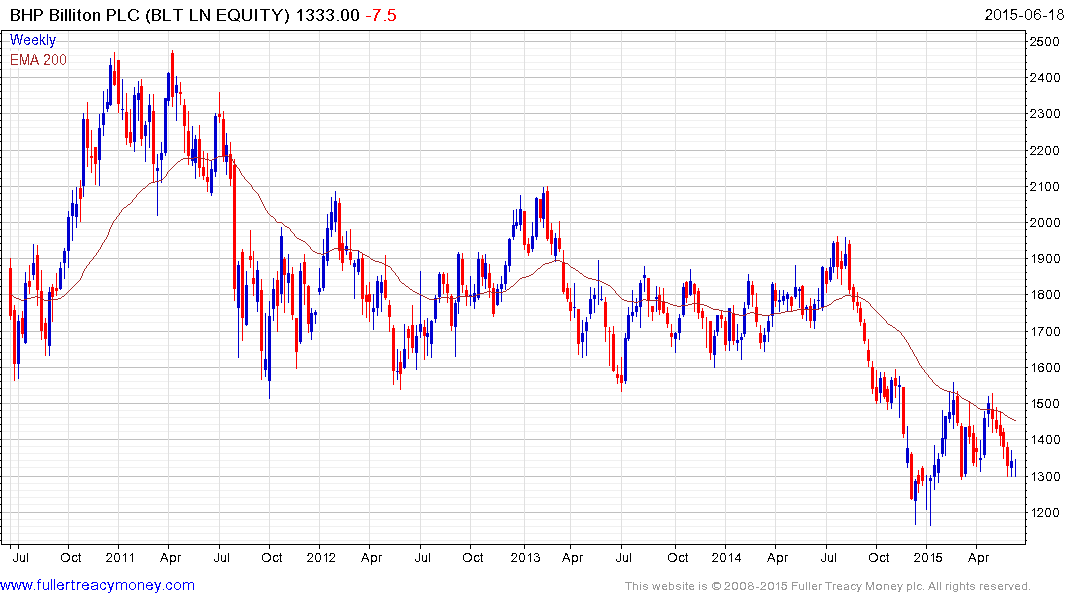 BHP Billiton’s (Est P/E 14.82, DY 6.62%) competitive yield has helped support prices following its break below 1500p late last year. It has stabilised near 1300p over the last two months but a sustained move above 1500p will be required to signal a return to demand dominance beyond current scope for an additional bounce. 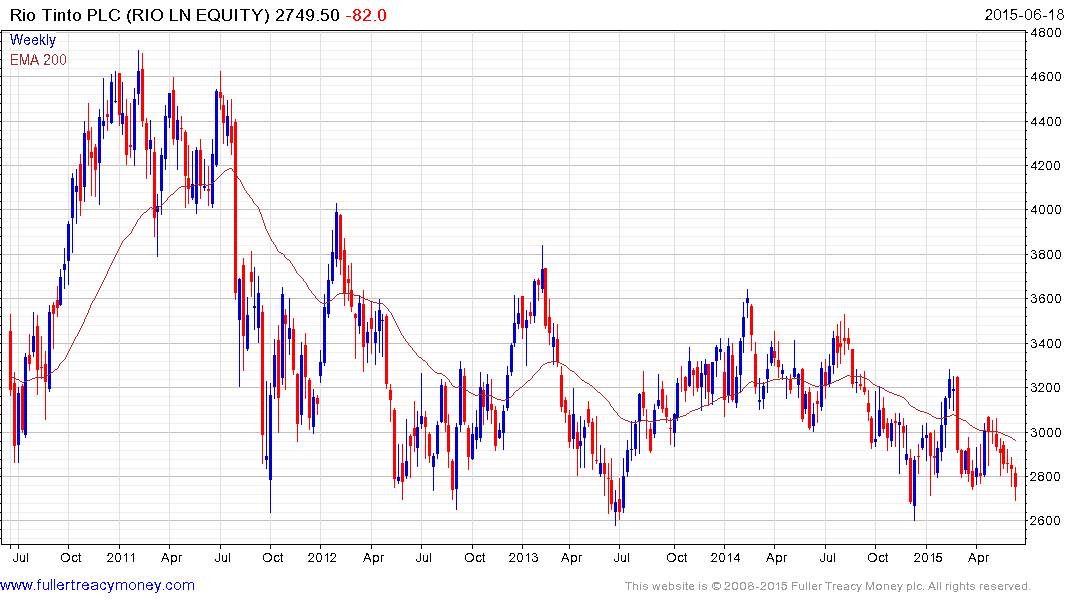 Rio Tinto (Est P/E 17.27, DY 5.45%) is currently testing the lower side of a four-year range. It found at least short-term support today but a sustained move above 3100p will be required to check the medium-term downward bias. 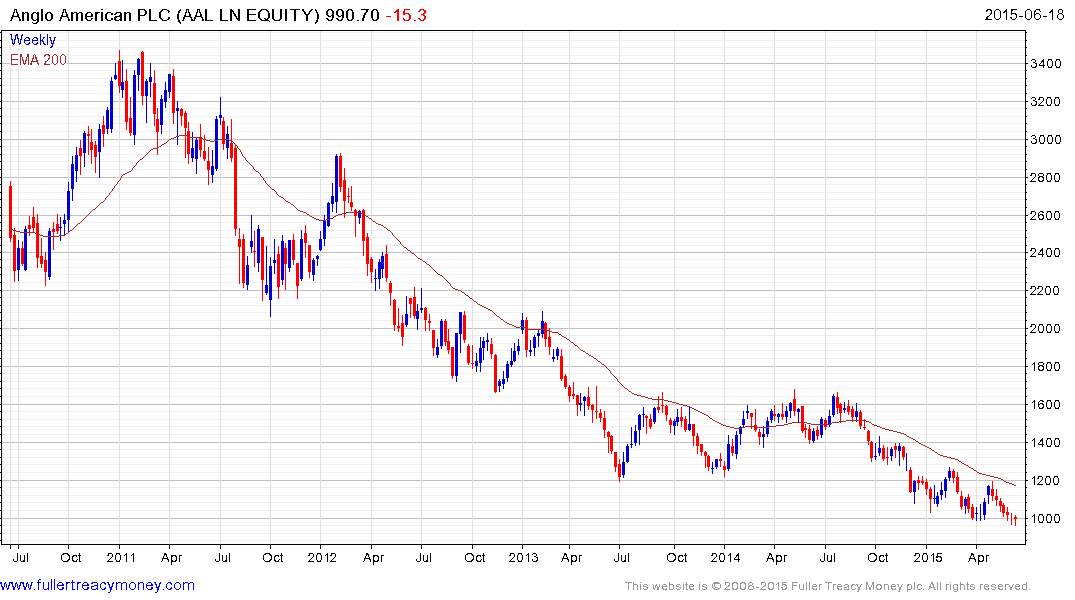 Anglo American (Est P/E 15.8, DY 6.17%) has been trending lower for more than three years. It needs to continue to hold in the region of 1000p and a sustained move above the 200-day MA will be needed to suggest a return to demand dominance beyond current scope for an unwinding of the short-term oversold condition. 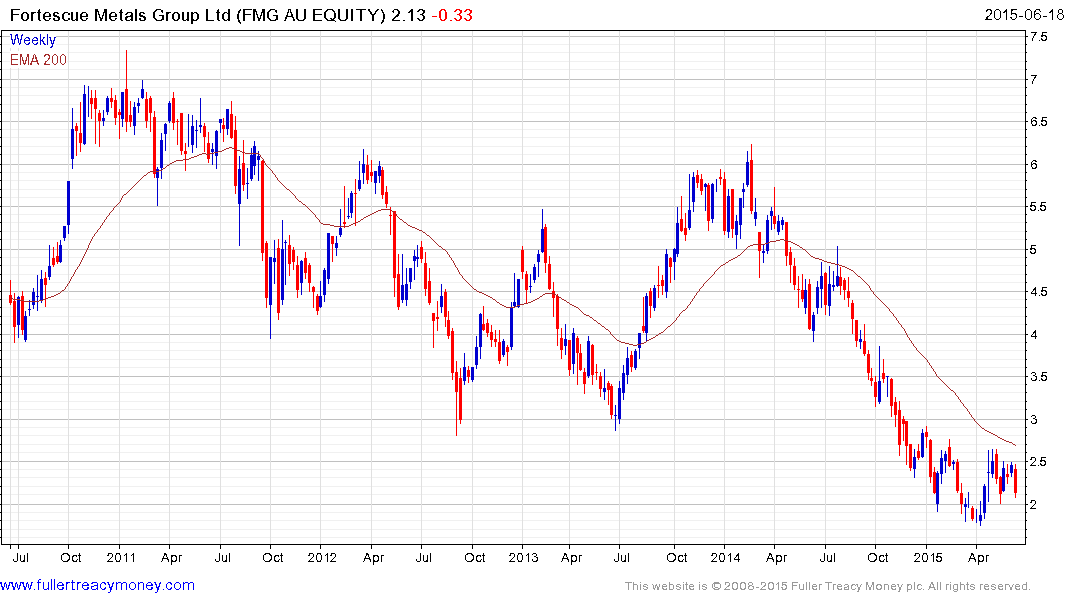 Fortescue Metals (Est P/E 27, DY 8.72%) omitted its dividend in 2013 and cut it by 35% in the last year suggesting that the current competitive yield may not be sustained. This is an interesting contrast to the above shares with reasonably secure dividends not least because of their relative strength. Fortescue pulled back sharply this week and continues to hold the medium-term progression of lower rally highs. A sustained move above A$2.50 will be required to signal a return to demand dominance.

It suggests that while the larger better capitalised companies do not yet exhibit patterns of medium-term demand dominance they represent greater stability as a result of their strong balance sheets and competitive positions within the sector.