Demand for platinum in the chemical industry has been at unusually high levels over the last five years, and posted further gains in 2018. Consumption is underpinned by the speciality silicones sector, the largest single chemical user of platinum, and by the nitric acid industry, both of which generate significant on-going demand that is proportional to production volumes. In contrast, purchasing of platinum for other chemical processes such as paraxylene and propylene dehydrogenation (PDH) occurs primarily at the time of plant construction; thereafter, only small amounts of metal are required to cover losses during plant operation and catalyst change-outs.

Worldwide, the use of platinum in speciality silicones is rising at 2–3% per annum, with much of this growth concentrated in China, reflecting underlying trends in end-use markets and government policies to reduce imports of chemical products. This process is unusual in that the platinum catalyst is consumed and no metal is recovered; platinum consumption is therefore directly linked to silicone production volumes.

The manufacture of nitric acid involves the use of a platinum catalyst gauze, from which metal is lost due to volatilisation over the course of a production campaign. Manufacturers often employ a palladium ‘catchment’ gauze to capture platinum lost from the catalyst, but as palladium prices have risen above those of platinum this is becoming less economic. With global nitric acid consumption rising at around 2% annually, platinum use in this application continues to increase gradually.

The clean diesel scandal has decimated demand for platinum from automakers. The price for anything is set at the margin so with a major source of demand evaporating, it had nowhere to go but down. The fact platinum cannot be recouped from manufacturing both silicone and nitric acid is new information for me as is the platinum intensive build out of refineries underway in China.

While the price of platinum collapsed from its 2011 peak, it is notable that ETF holdings have been quite steady and in fact increased substantially in 2014 while the platinum price was declining. That is not something I have a ready explanation for. Meanwhile, the significant rebound in investment demand since early this year suggests bargain hunting. 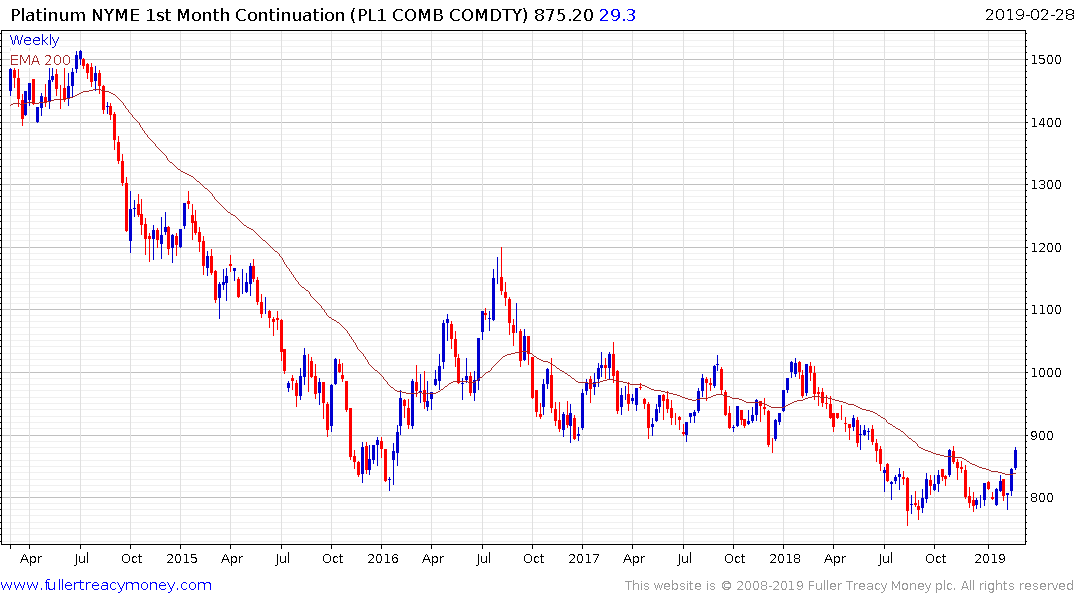 Platinum broke successfully above the trend mean last week and a sustained move below it would be required to question medium-term scope for continued upside.