When emerging markets generally are having such a hard time, why is India the most important exception? Over the past five months the MSCI index of emerging markets has fallen 11 per cent. But in Mumbai shares have risen 12 per cent.

One obvious reason is that India is less exposed to Trump’s “trade war.” Its economy is driven by domestic demand rather than exports.

Another is that it’s counter-cyclical in that its economy is accelerating when those of most of the rest of Asia have been topping out. It’s ten years since its last investment cycle peaked. Latest data suggests a new one has begun. Latest annual growth rate is an extraordinary 8 per cent plus.

The property market is definitely picking up, with pre-sales of housing developments running 25 to 30 per cent ahead of last year. Although mortgages are starting to become more expensive after hitting a 12-year low a few months ago, affordability is now running at the best level in more than ten years.

Domestic investors are optimistic despite negatives such as a weaker currency, higher oil prices and the prospect of monetary tightening. Net flows into equity mutual funds reached $16 billion in the first seven months of the year. This increasingly looks like a secular phenomenon, which would be “extremely bullish,” says CLSA’s Christopher Wood.

Any stock-market correction caused by concerns that prime minister Narendra Modi fails to secure re-election in the national poll next April/May “will be a buying opportunity.”

India is at the beginning of a digital revolution. While analogies between China and India often do not make sense, I believe in this case there are some clear parallels. In December 2013 China introduced 4G and that represented the gateway to the growth of online shopping, delivery systems, online banking, mobile payments, the cashless society, social media apps, gaming etc. Reliance Industries introduced a country wide cheap 4G network at the end of 2015 in India and it is gaining increasing traction with consumers. 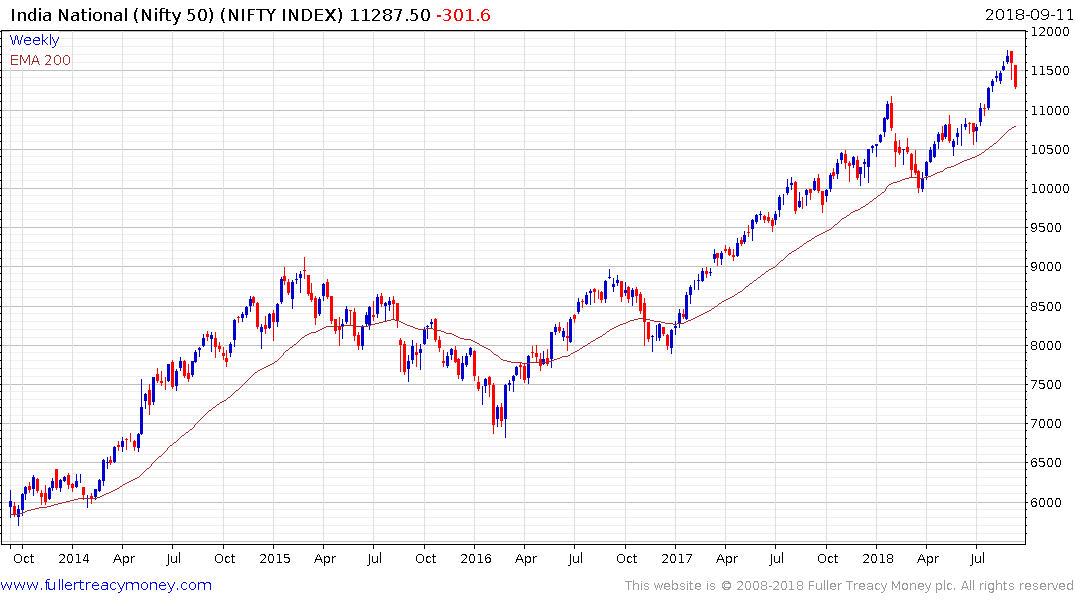 The Nifty Index pulled back rather sharply today to confirm a reversion to the mean is now underway. 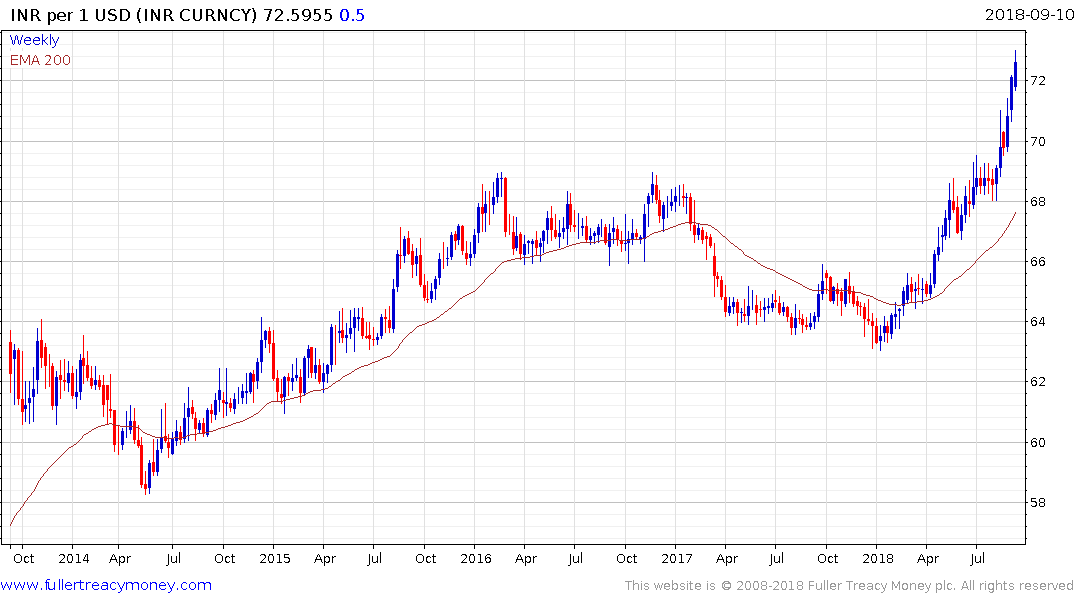 The India Rupee continues to extend its decline and is becoming increasingly overextended. However, some form of intervention from the RBI will likely be required to stem the slide. 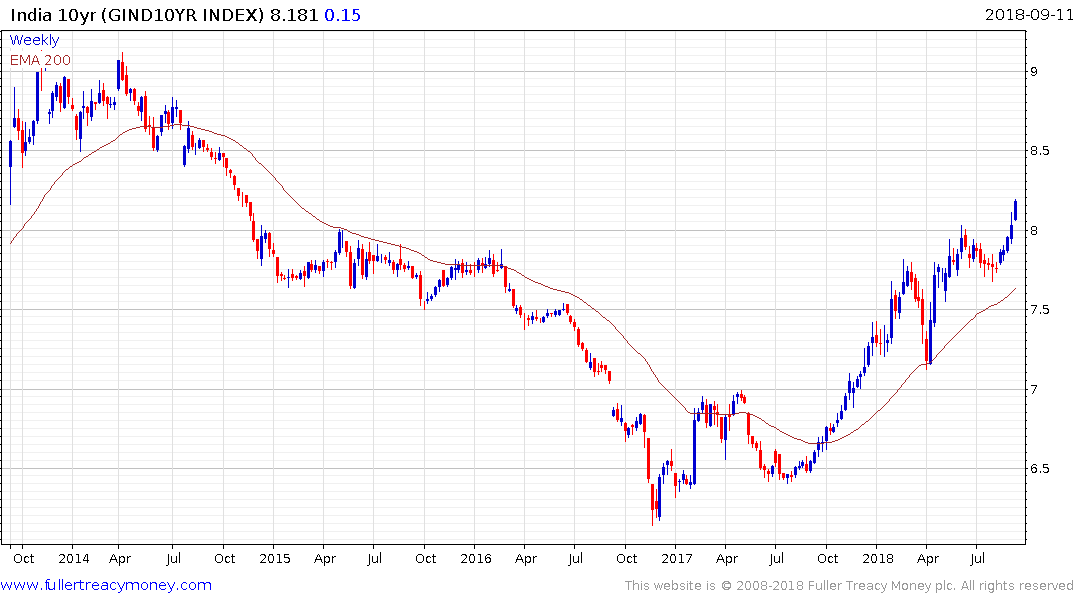 Indian government bond yields broke above 8% last week for the first time since 2014 and a clear downward dynamic will be required to question supply dominance. 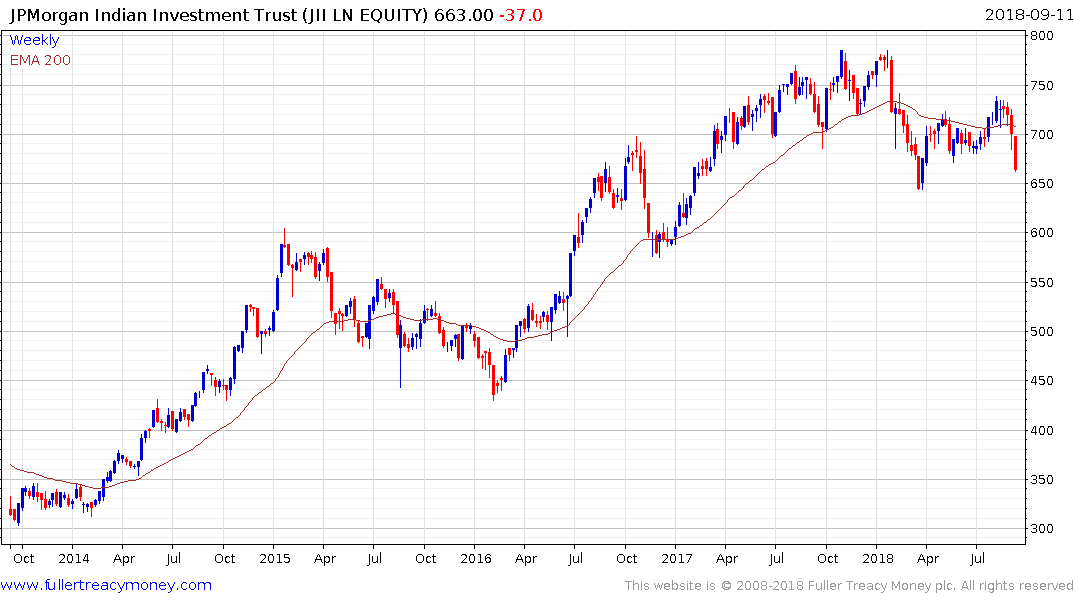 The JPMorgan India Trust is trading at a discount to NAV of 14.48% and has pulled back sharply over the last couple of weeks as both the currency and stock market have pulled back. That confirms a medium-term peak is in place and a sustained move back above the trend mean will be required to signal a return to demand dominance. 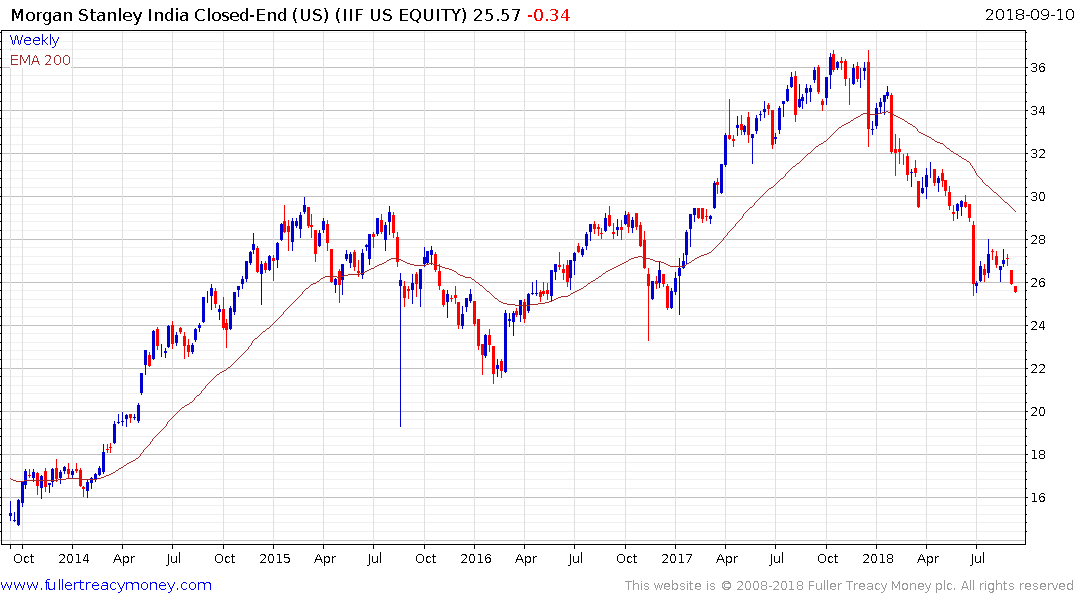 India’s stock markets are prone to occasional bouts of volatility, which have historically been some of the best opportunities to increase positions. The weakness of the Rupee is particularly weighing on the performance of US Dollar denominated India funds with the Morgan Stanley India Investment Trust holding a progression of lower rally highs for most of this year so far.