On Target Japan by Eoin Treacy

Dividends are “being raised relentlessly,” says Price Value Partners? Tim Price. Incredibly, some international analysts say Japan is now an equity income play, after decades when its companies were notorious for neglecting their shareholders.

Tim says. Stock buybacks are now accelerating, and unlike the US, where buybacks are “debt-fuelled,” those in Japan are funded out of cash. John Seagrim of CLSA says: “The deep value opportunities in Japan are almost endless,” with 1.480 listed companies trading below their tangible book values.

For the first time in years, the Japanese stock market now has strong domestic support. Jeffrey Gundlach says the government is encouraging it via three sources of “pretty much automatic buying” at an annual rate in excess of 5 per cent of total market capitalization. The central bank is buying ¥6 trillion (about $53 billion) worth of equities every year, corporate Japan is investing about the same amount, the state pension fund ¥5 trillion, private investors about ¥4 trillion.

Japan posted its largest current account surplus in a decade in 2016 suggesting the country is benefitting low oil prices, the weakness of the Yen, improving global GDP growth and tourists from neighbouring countries flocking to its shores. 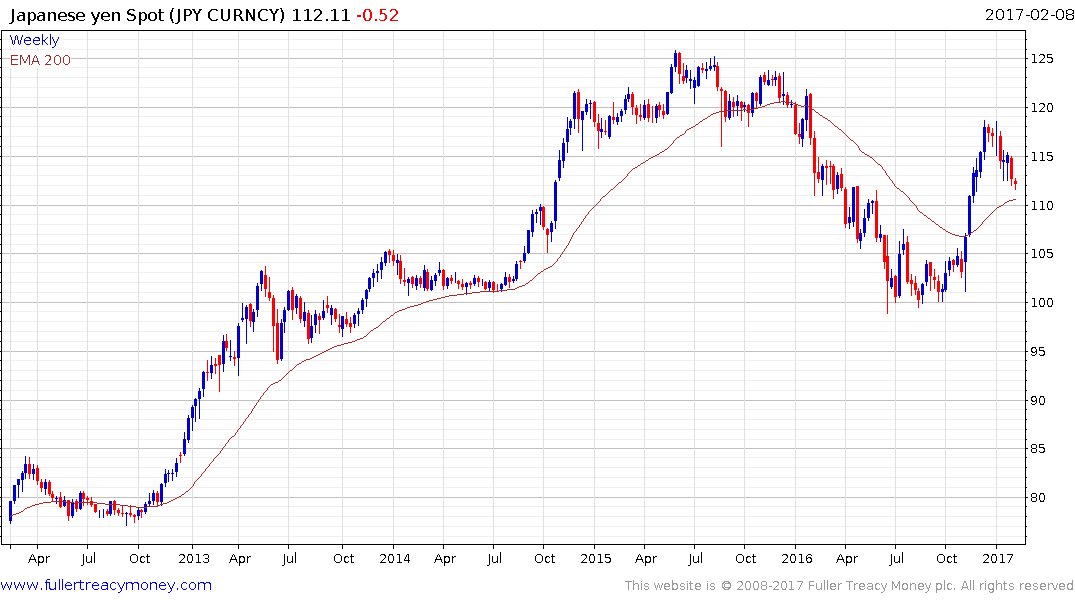 The 2013 devaluation of the yen represented a significant bullish catalyst for nominal Japanese stock prices and the Nikkei surged while the currency declined.  Despite the fact that the central bank, state pension fund and private investors are now buying stocks the majority of foreign investors have been focused on the currency not least because it had such an influence on sentiment following the introduction of Abenomics.

The Dollar has almost completely unwound its overextension relative to the trend mean against the Yen and is now in the region of a potential area of support represented by the ¥110 level. A sustained move below that area would be required to question more than temporary supply dominance. 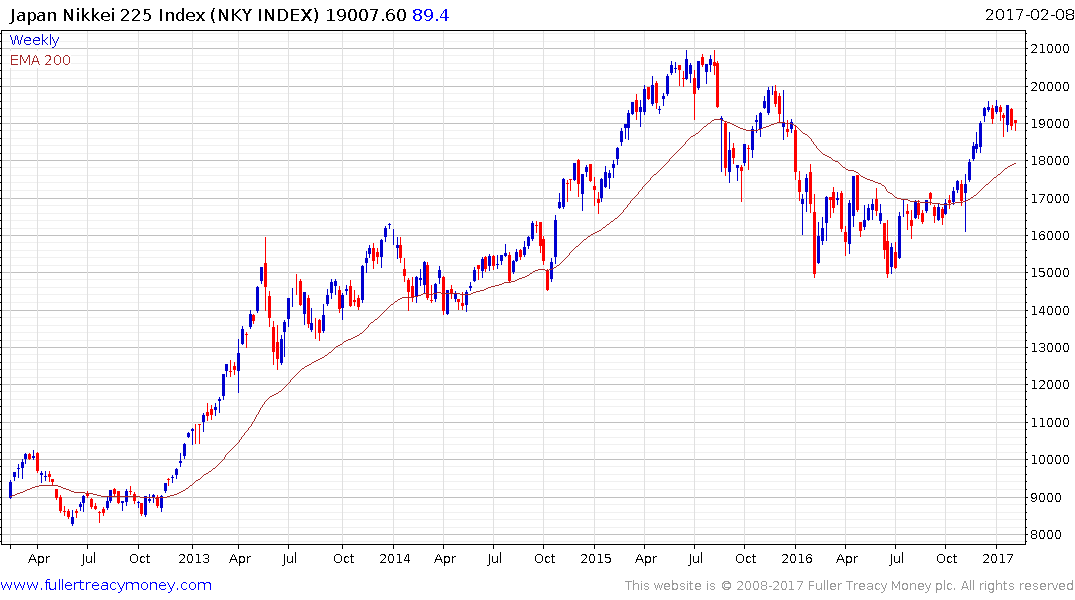 What is perhaps most interesting is that, over the last few weeks, the Nikkei-225 has been more resilient to currency strength than at any time in the last few years. It has been mostly rangebound below the psychological 20000 level in what has so far been a relatively gradual process of mean reversion. If the Dollar demonstrates support in the region of ¥110, that should translate into an additional tailwind for Japanese stocks. 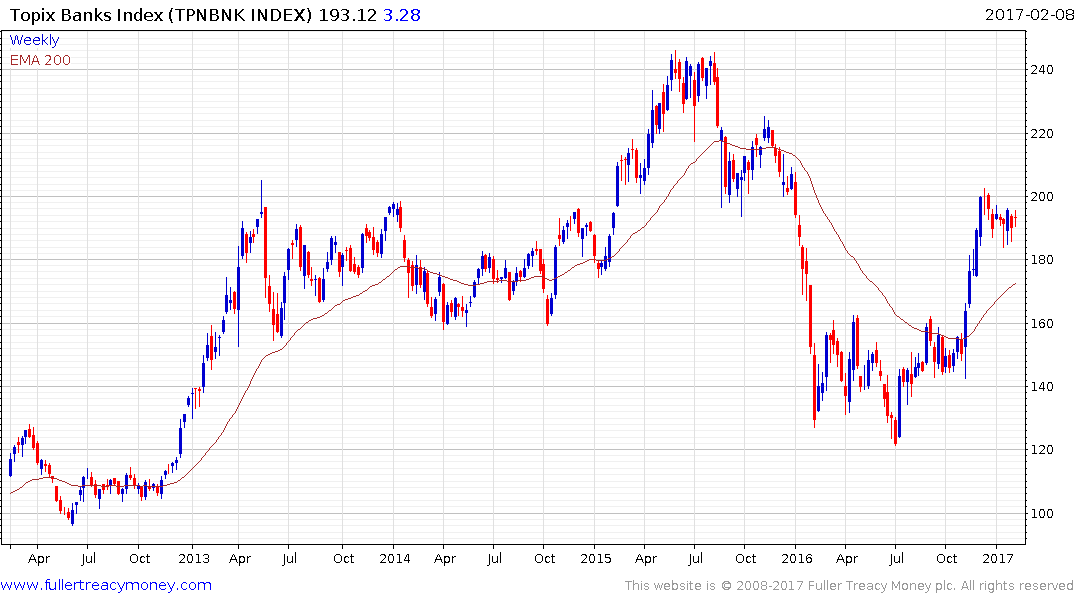 The Topix Banks Index is firming within its short-term range and a break below 185 would be required to question current scope for continued higher to lateral ranging. 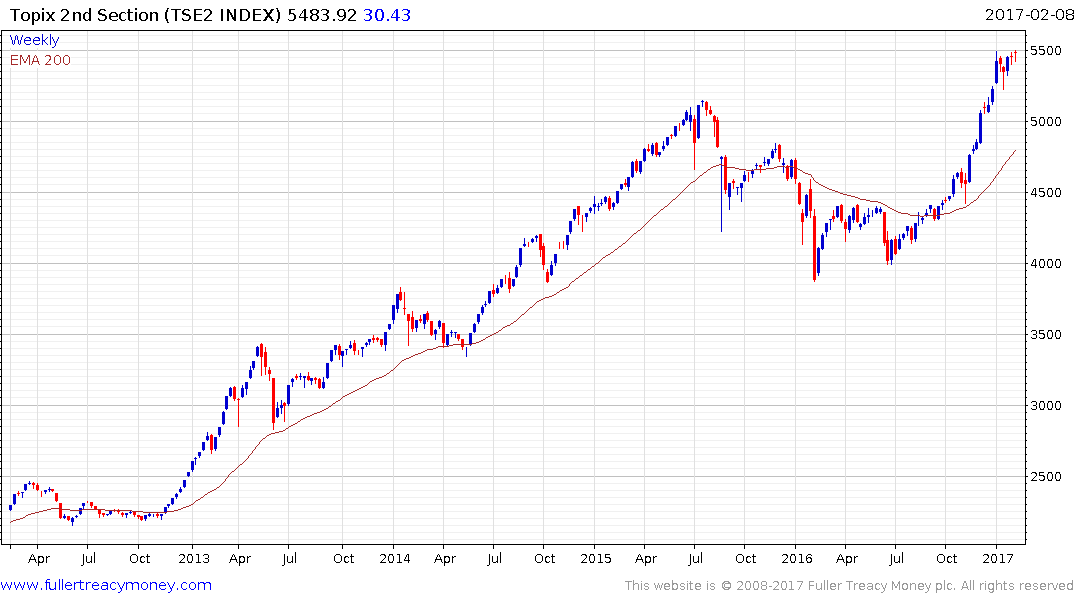 The Topix 2nd Section of small caps remains a lead indicator for the Japanese market and is testing he upper side of its six-week range.