Volatility roared back into the U.S. equity market as fresh concern about the prospects for tax reform sent the Cboe VIX Index to its biggest surge since August.

“In terms of how we see the world and the impact to our strategy, to the extent this reform causes some uncertainty, that could lead to a pickup in volatility,” said David Jilek, chief investment strategist for Gateway Investment Advisers. “But we don’t have any keen insights as to how the politics is going to play out.”

In a year that’s been characterized by record calm, Thursday’s two-point intraday jump in the VIX was enough to push it above the average level for 2017. The gauge, which uses options-trading data to measure implied volatility of S&P 500 stocks, still sits below the bull-market average of 18.3.

Major U.S. equity benchmarks slid from record levels, with losses widening after the Senate revealed that its tax plan would delay lowering the corporate rate until 2019.

Wall Street has been rallying on speculation the Trump tax cuts would benefit corporations and boost consumer sentiment. News yesterday that the Senate proposal would defer tax cuts until 2019 was not greeted with optimism and introduced doubt about exactly what, if anything, will eventually get passed. 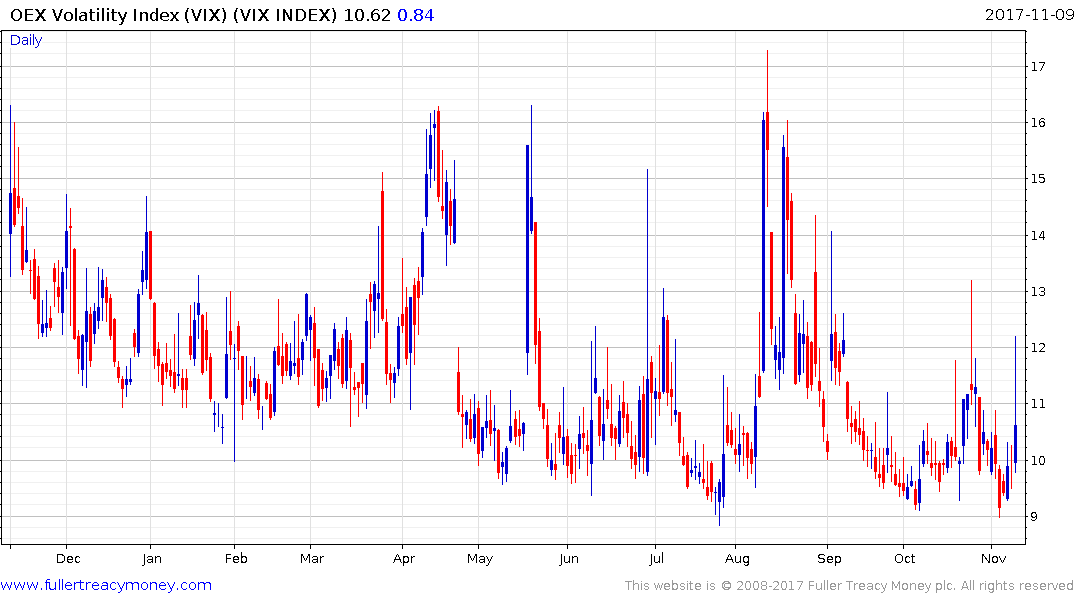 The VIX Index held about half its intraday gains but upside follow through tomorrow will be required to signal more than a temporary peak. Over the course of the last few months, occasional pops on the upside have not been sustained and tests of the lows have been posted shortly afterwards. A sustained move above 13 will be required to break that pattern. 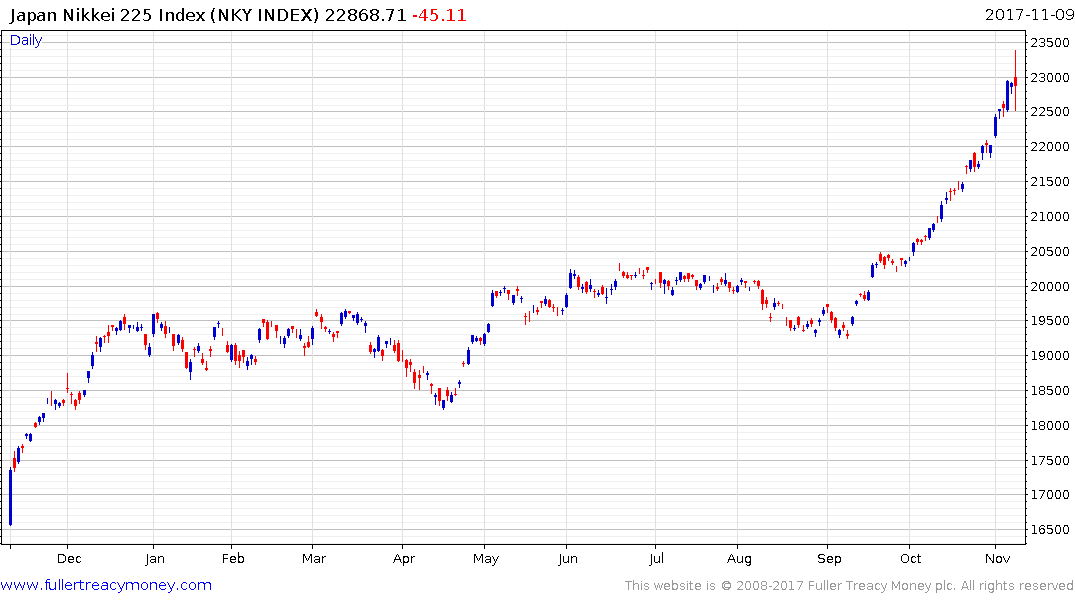 Volatility picked up in Japan this morning with the Nikkei-225 posting a large outside day but it finished largely unchanged. In the futures market it is working on a large downside key reversal, so the Index is likely to open lower tomorrow. That increases the potential a peak of near-term significance has been reached with the leading Topix 2nd Section Index pausing in the region of the round 7000.

The Philadelphia Semiconductor Index has been among the best performing sectors over the last three months, but a rather large overbought condition is now evident which raises the potential that today’s pullback marks at least a peak of near-term significance. 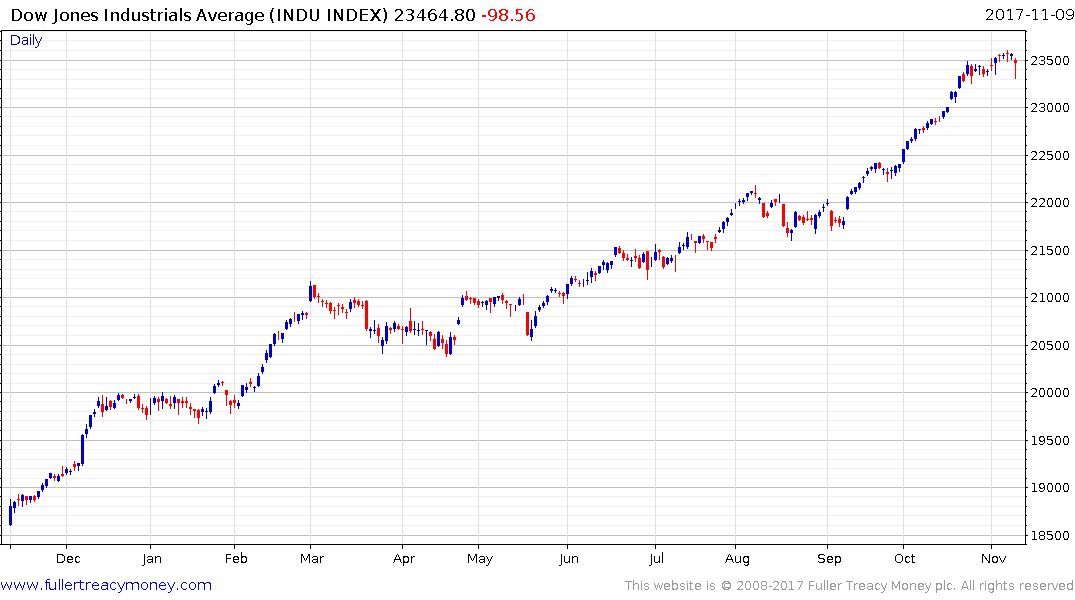 The Dow Jones Industrials Average has been ranging in a tight manner with a mild upward bias since October 24th. Today’s intraday low returned to the low at the start of the range, but it recovered most of the decline by the close.

Downside follow through will be required to suggest a change to the dominance of the quantitative buy-the-dips strategy. How well the Nikkei-225 rallies back from the decline suggested by the futures market tomorrow will also be an indication of whether risk parity strategies are also active in the Japanese market. 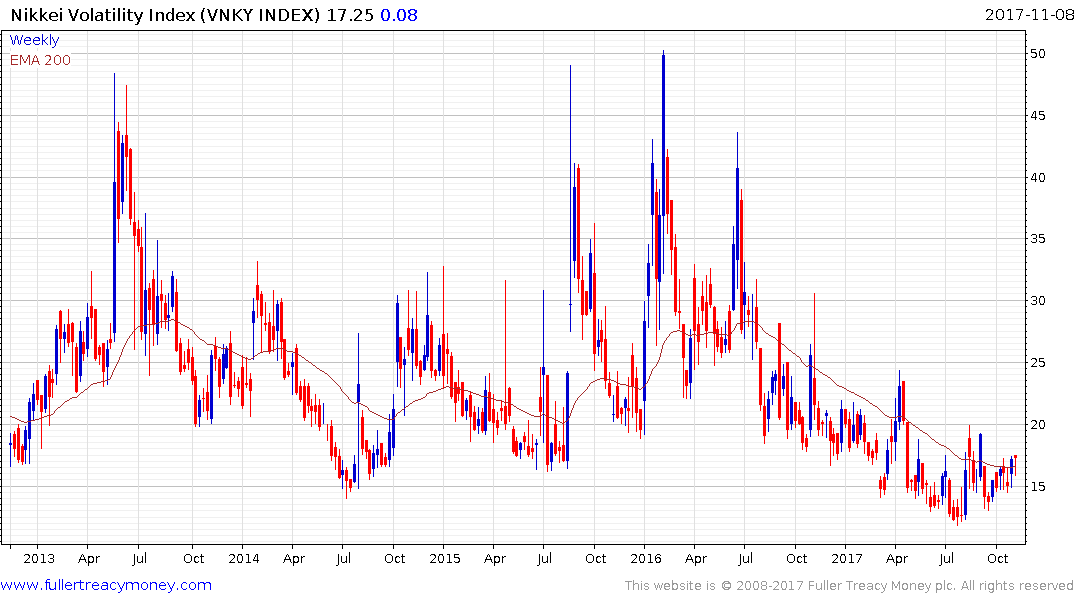 The trend of the Nikkei’s volatility suggests some commonality with the VIX in the USA.