Veteran subscribers will be familiar with our distaste for the acronym “emerging markets” because it is a very big world out there and it rarely pays to group them all together. Nevertheless, there is no denying that many investors do group them all together and the performance of indices like the MSCI Emerging Markets has an impact on sentiment. 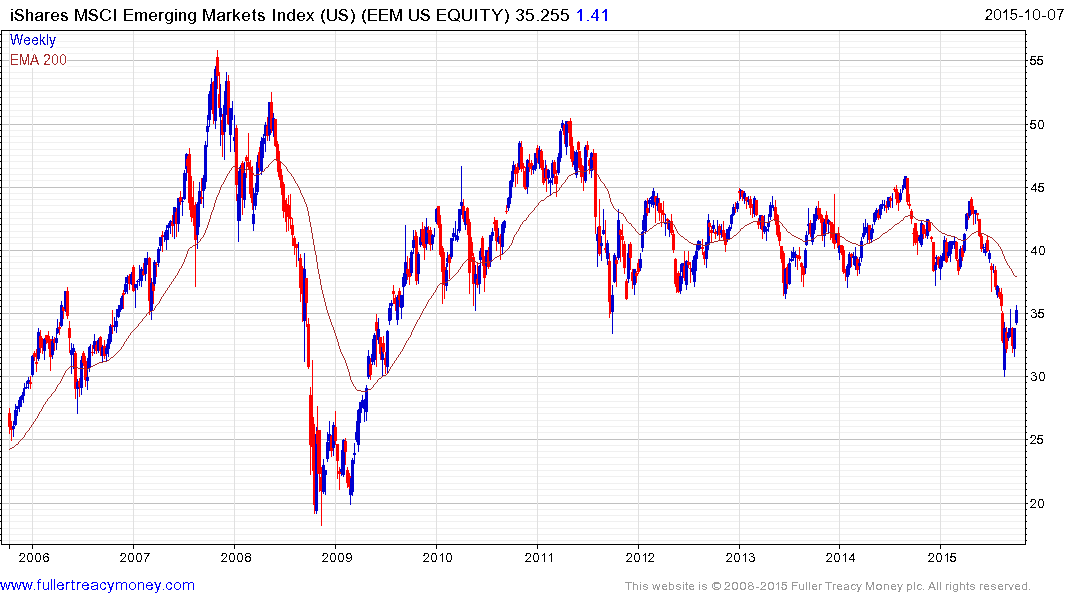 The Index broke down from a lengthy medium-term range in July and has stabilised in the region of 800 over the last month. Potential for a reversionary rally is now looking more likely than not.

There has been a high degree of commonality in the declines posted by currencies outside the G7 with some notable accelerations. For example the Brazilian Real, Indonesian Rupiah and South African Rand are all down in the region of 50% over the last few years. This would be a big move in any asset class but a move of this magnitude in a currency has transformative effects on an economy’s competitiveness.

At The Chart Seminar, we emphasise that acceleration is a trend ending and the bigger the acceleration the more important it is. The problems in a number of countries with US Dollar denominated debt are now well known but this is not new news and a great deal of pessimism is already in the price. That does not mean the situation cannot get worse but it would have to get worse for these currencies to sustain further moves to new lows.

Large institutional investors led a charmed existence as long as currency and capital market appreciation were working in their favour. As the Dollar began to rally from relatively depressed levels they had little choice but to exit their positions because carry trades were pressured and the real value of their investments declined. At least short-term lows in Asian and commodity currencies represent greenlights for international investors to reengage with the respective stock markets.

It is important to highlight that the iShares MSCI Emerging Markets ETF (EEM) does not hold significant positions in the countries which have had the biggest moves in their currencies and as such is unlikely to be the best instrument to play any bounce. Individual exposure to countries via funds or individual stocks is likely to be a better choice. 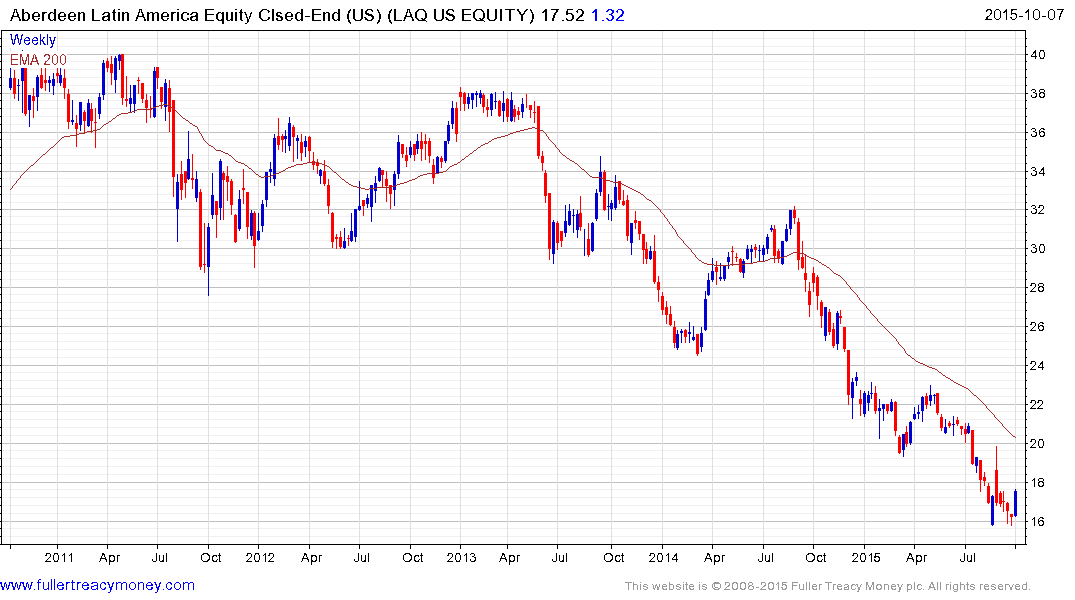 For example the US listed Aberdeen Latin America Equity Fund has at least paused in the region of $15 following a 50% decline and potential for a reversionary rally is looking more likely than not. It has a yield of 5.35% and trades at a discount to NAV of 9.67%%. 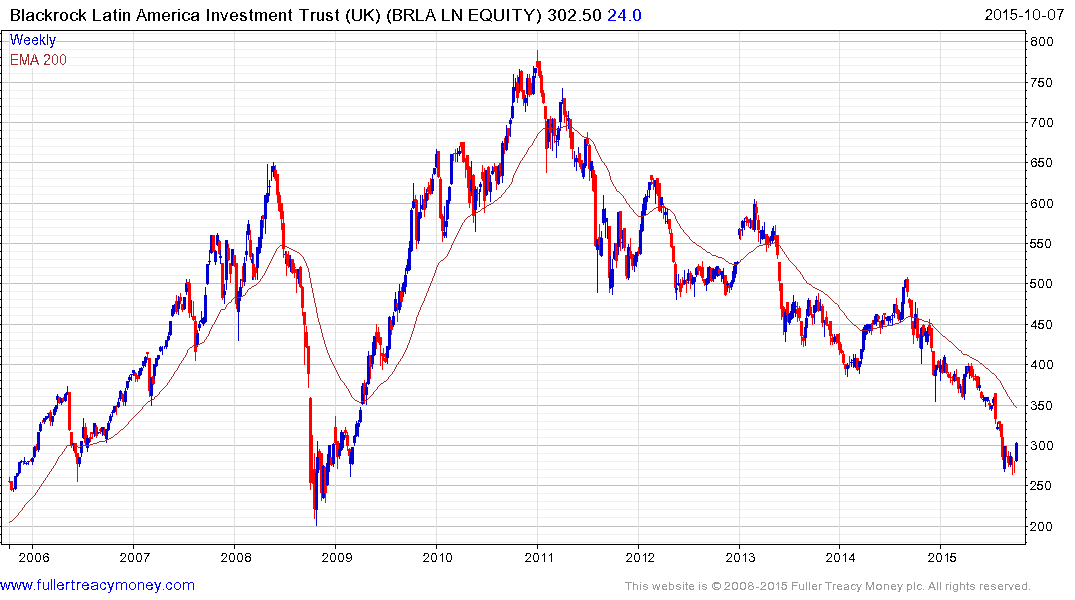 The UK listed Blackrock Latin American Investment Trust trades at a discount to NAV of 8.14%, yields 6.6% and has a similar pattern to the Aberdeen fund. 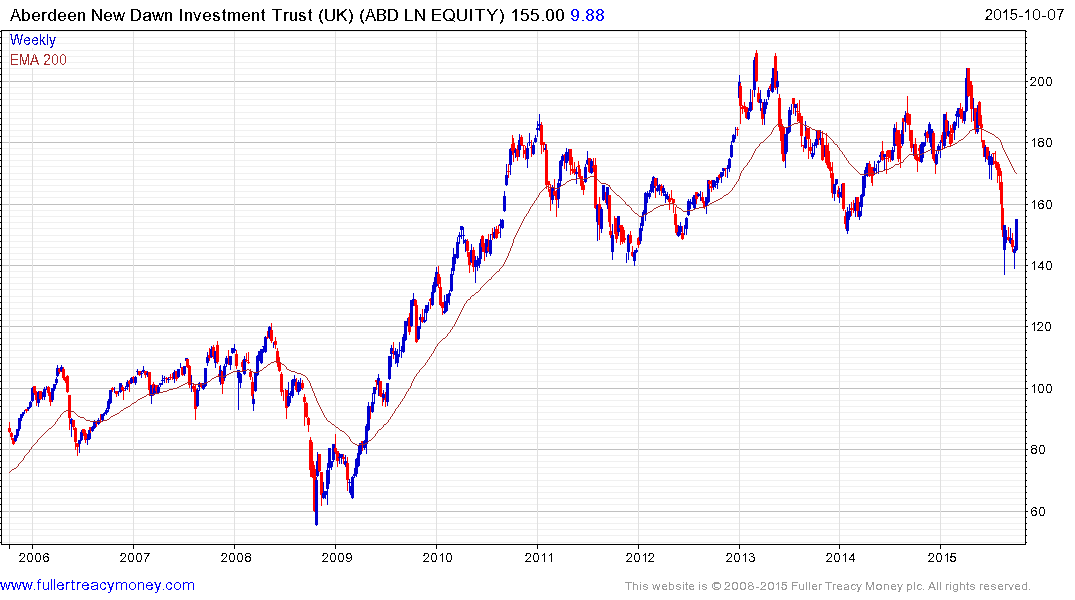 The UK listed Aberdeen New Dawn Investment Trust trades at a discount to NAV of 8.53%, yields 2.45% and is bouncing from the lower side of a four-year range.