Kibali gold mine, one of the biggest in the world, opened officially
Comment of the Day

Kibali gold mine, one of the biggest in the world, opened officially by Eoin Treacy

As 45% owner AngloGold Ashanti’s CEO, Srinavasan Venkatakrishnan (Venkat), says, though, to meet its full potential it was of the utmost importance that the DRC’s mining code remained supportive of the gold mining sector. The process so far has gone remarkably smoothly with the mine being brought on stream ahead of schedule despite it being located in one of the most remote parts of the African continent in the north eastern DRC. Indeed the heavy equipment had to be transported across from Africa’s east coast – quite a remarkable logistical achievement in its own right.

The other 45% owner is Randgold Resources (with the 10% balance owned by DRC parastatal SOKIMO) and it is Randgold which is the operator and was responsible for managing the mine’s construction. The company has great African experience in mine building and it seems to have transferred this across successfully to the DRC environment.

2013 represented a landmark for many gold miners as they rediscovered their regard for free cashflow and slashed exploration and development budgets. Today’s official opening of a major project in the DRC is welcome and a testament to the prowess of Anglogold Ashanti and Randgold Resources in developing African mines. However the pace of new mine development has stalled and the prospects of significant additional new supply sources opening up in the near term is a deteriorating possibility.

Most media commentary on gold has been in reference to bearish reports by Goldman Sachs and Morgan Stanley, as well as how prices are reacting to the evolving situation in Russia. Generally speaking this represents a sideshow tor the broader issues such as the withdrawal of ETF speculative flows, shortage of physical supply, India’s tax on imports and damaged investor sentiment. 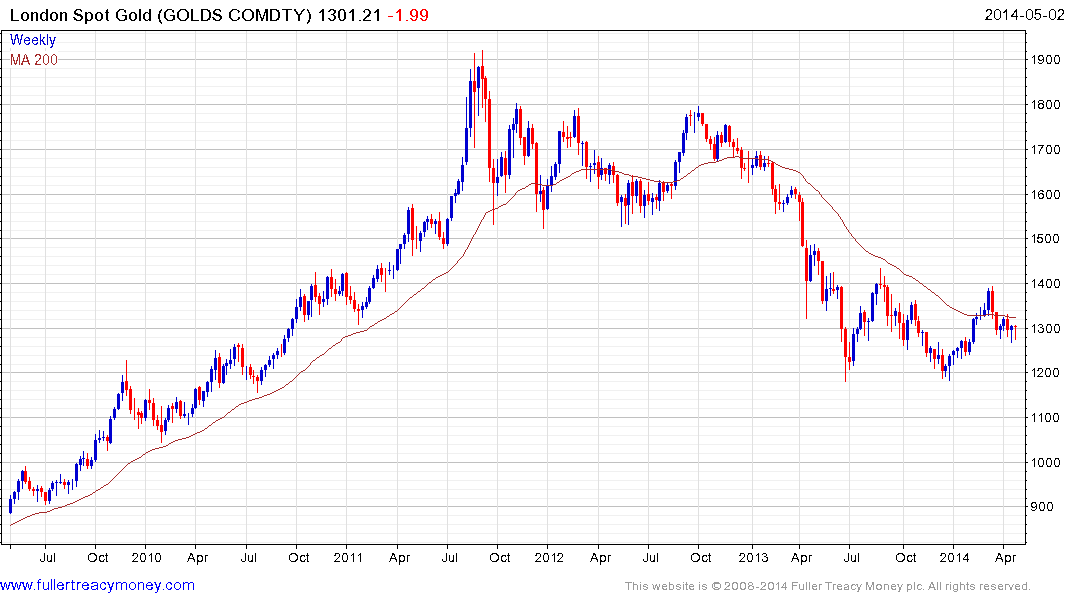 These competing influences have resulted in gold prices ranging between $1180 and $1400. They have now retraced approximately half of the January through late March advance and steadied again today in the region of $1300. A sustained push back above the 200-day MA, currently near $1325, would bolster the view that demand is returning to dominance beyond the short-term. 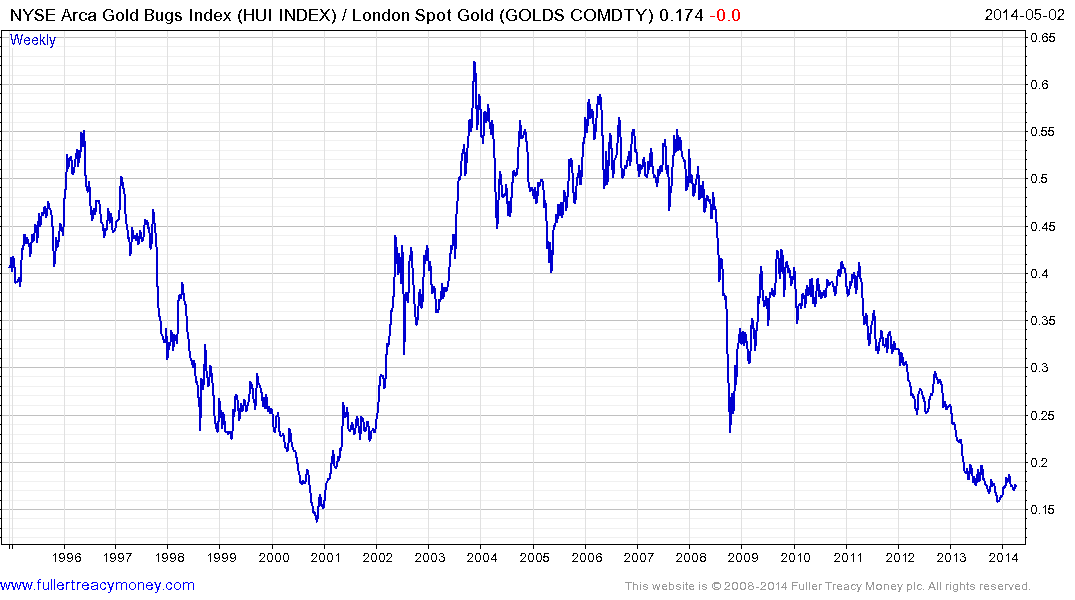 Gold miners were among the most beaten down sector globally and returned to test their 2001 lows relative to gold; unwinding the entire bull market in the process. They are cheap provided gold prices continue to stabilise and spending is held in check. Those with reliable yields are among the most attractive from an investment perspective. 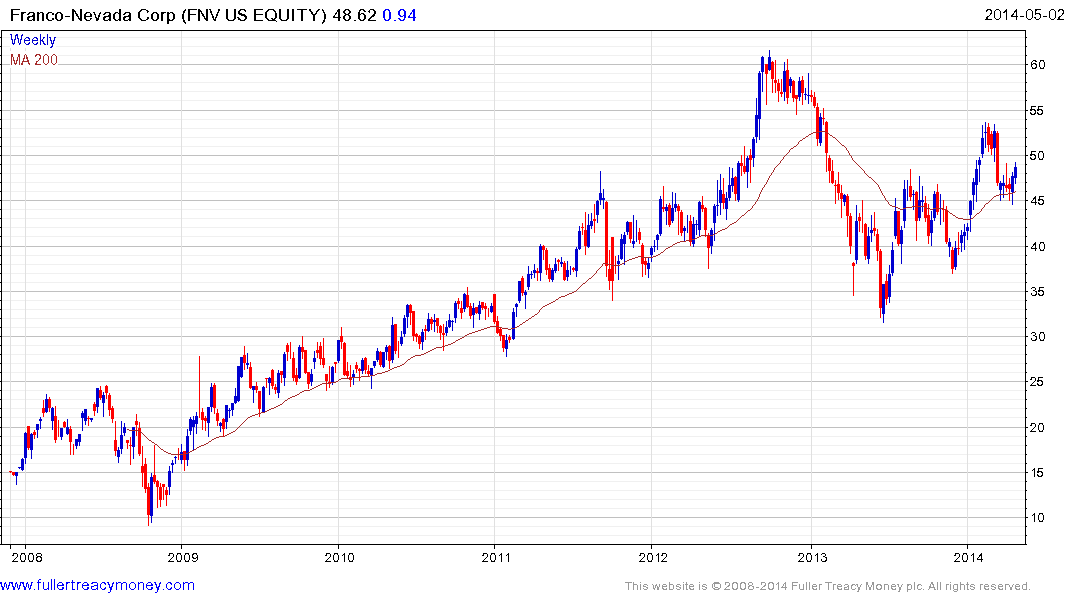 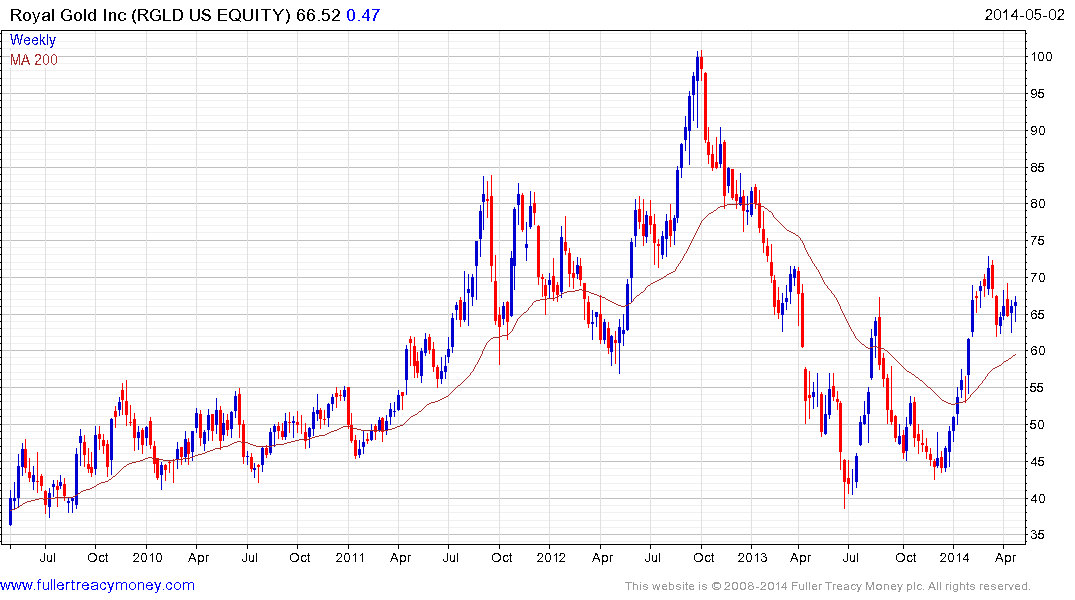 Franco Nevada (Est P/E 51.3, DY 1.65%) and Royal Gold (Est P/E 69.7, DY 1.26%) both stream royalties from their interests in gold and other assets. Both have been ranging in the region of the upper side of their respective bases and sustained moves below their 200-day MAs would be required to question current scope for additional upside. 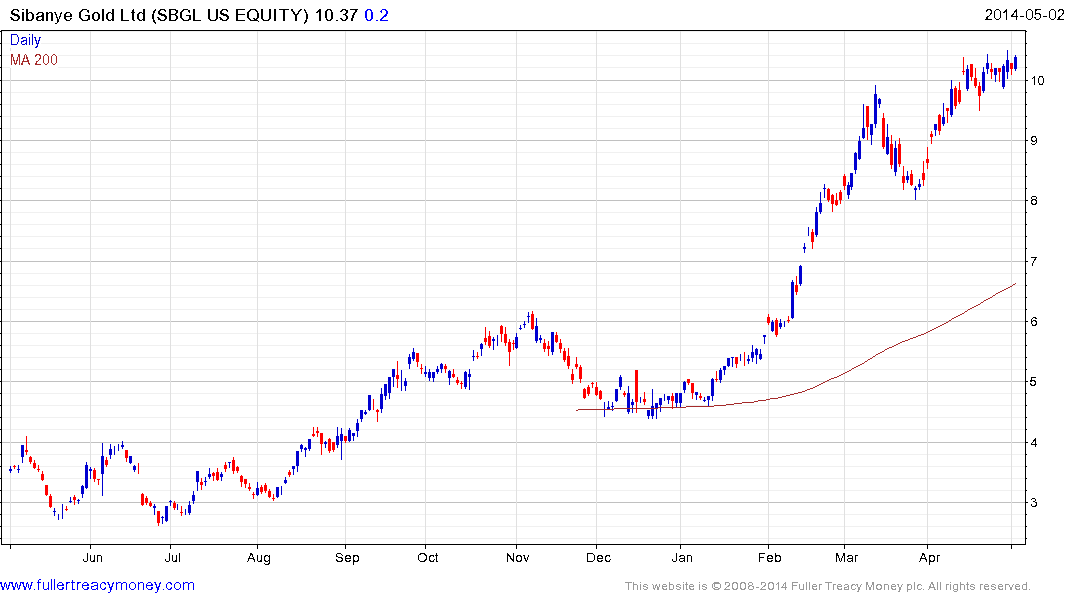 Sibanye Gold’s (Est P/E 12.92, DY 2.69%) advance has moderated over the last month but a break in the progression of higher reaction lows, currently near $8 would be required to question medium-term scope for additional upside. 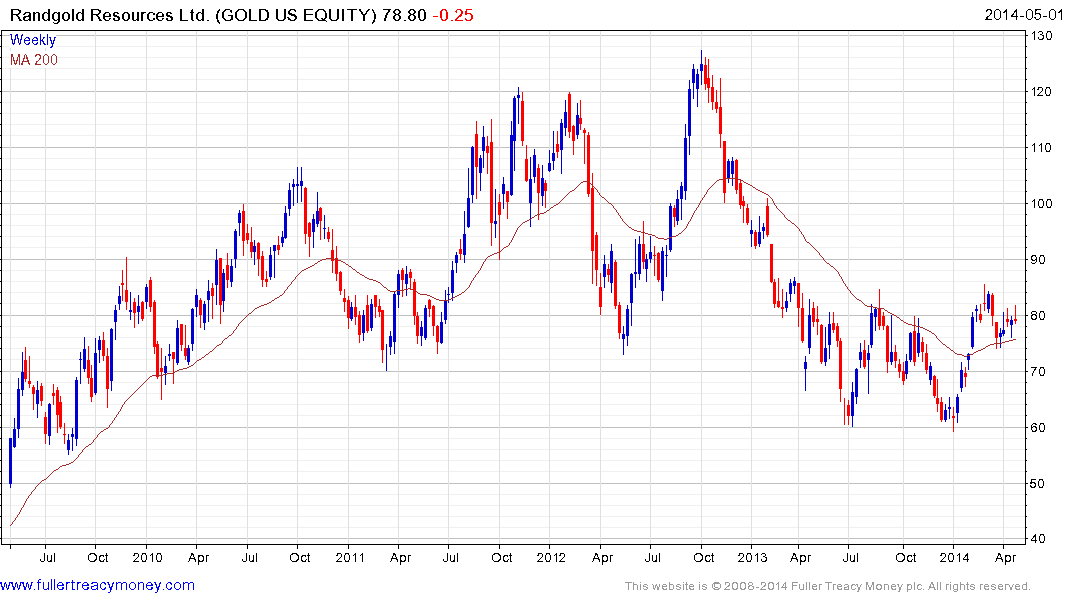 Randgold Resources (Est P/E 23.52, DY 0.63%) grew its dividend by 50% last year. The share is currently trading close to the upper side of a yearlong base and a clear downward dynamic would be required to question potential for a successful upward break. 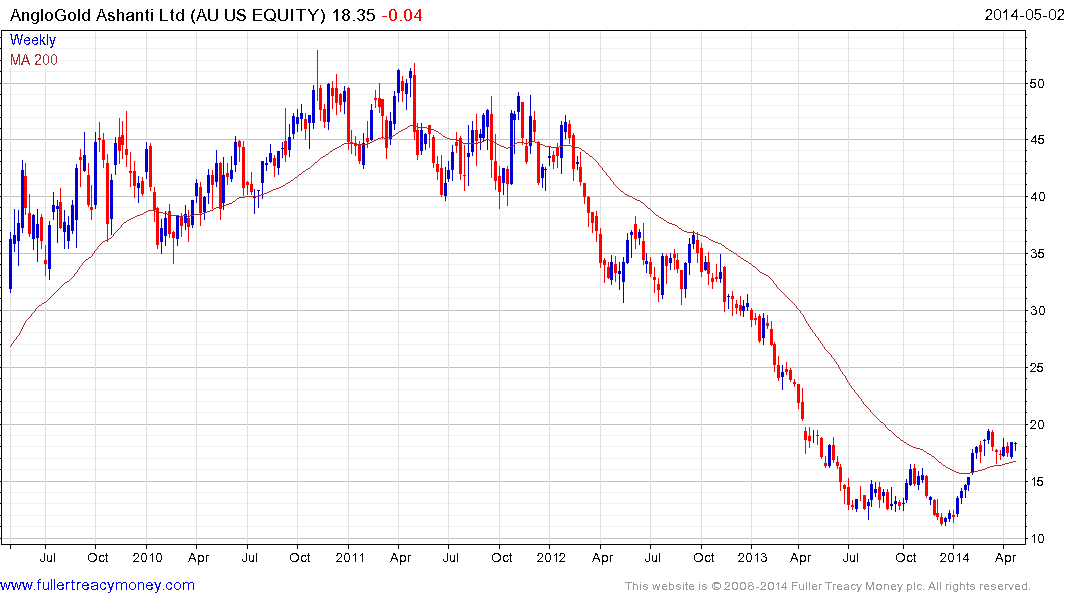 Anglogold Ashanit (Est P/E 13.79, DY 1.26%) omitted its dividend in August and again in March but as the developer of reef boring technology it is worth watching. The share has been forming a first step above a yearlong base since early March and a sustained move below 16.70 would be required to question medium-term upside potential.

Also see Comment of the Day on March 18th.