2) Growth-inflation balance has improved and should remain; time now to focus on quality of growth
India continues to be one of the fastest growing economies in the world, but what has changed in recent years is the quality of growth-inflation mix. Currently India’s real GDP growth is in the 7-7.5% range, with CPI inflation anchored around 4.5%. This is markedly different from FY10-11 period, when real GDP growth averaged about 9.5%, but with CPI inflation running around 11.5%. While achieving high economic growth is important, it is more important in our view to achieve this along with low or acceptable inflation. In fact we would argue that it is imperative to get inflation and inflation expectations down, to achieve higher (and sustainable) growth and investments. From this perspective, there is no trade-off between growth and inflation in the long term.

In fact, we believe that today’s corporate sector balance sheet stress can be traced back to the developments of the FY10-11 period, when a lot of mal-investments took place, with entrepreneurs believing (wrongly) that high nominal GDP growth, negative real rates and stable rupee environment would continue for the foreseeable period. In reality (and in hindsight), the FY10-11 high growth period was an aberration and led to the formation of macro imbalances, which later would unravel in the form of a currency crisis in mid-2013. In our view, a large part of those mal-investments were caused by persistent and large negative real rates, which gave a false sense of confidence and comfort to the Indian entrepreneurs about potential high return on investments.

We are reasonably certain that similar type of macro imbalances will not be tolerated or allowed to be formed in the first place, given the changes that have taken place particularly with respect to RBI’s inflation management policy. With RBI formally committed to keep CPI inflation low, in the 4-5% range, and real rates positive in the 1.5-2.0% range, we believe chance of misallocation of capital, based on faulty market signals remain low in the future and would be dealt with decisively and proactively, if it were to manifest somehow. This would ensure that India’s growth-inflation mix remains prudent in the period ahead, which should help investors make decisions regarding long-term investments based on realistic expectations of returns and profit.

India’s current growth rate is below potential, as per various metrics, including the composite PMI, which has remained stagnant in the last three years. Furthermore, growth is mainly supported by consumption at this juncture (10.5%yoy real growth in FY17), with private investment remaining anemic due to the high leverage of the corporate sector and weak demand. Or in other words, the quality of growth is not optimal at this stage. In our view, a healthy mix of consumption and investment growth needs to be achieved to prevent macro imbalances and inflationary expectations from building up and monetary actions should be calibrated keeping this in mind. The developments of the last two years, where RBI has cut policy rate by 175bps but private investment momentum has weakened further, have raised doubts about the efficacy of monetary policy action to solve the malaise of the private sector.

​We think both RBI and the government have been prudent with their monetary and fiscal policy stance in the past few years, focusing more on sustaining macro stability, rather than choosing the easy way out to prop up growth in the short-term. The strategy instead to focus on long-term structural reforms, like improving ease of doing business conditions in the country, will in our view help support a more robust and sustainable private sector capex cycle in the future, once demand starts coming back. India, in our view, is buying higher growth for the future by adopting a prudent macro policy stance at the current juncture.

The RBI has done its best, through a change of leadership following Modi’s election, to stick to an inflation targeting strategy that delivers on real growth rates. That has allowed the currency to stabilise and the Rupee rallied from early this year to break a medium-term downtrend. 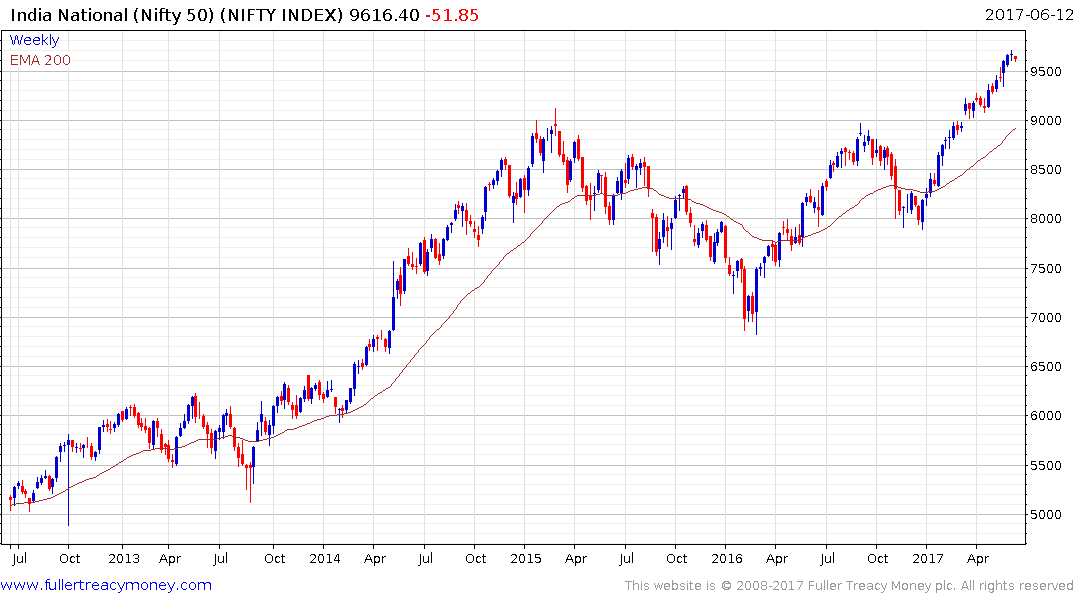 With overnight interest rates of 6.25% the allure of cash for foreign investors when the rupee is appreciating represents a powerful siren call and also helps to explain continued demand for Indian equities. The Nifty Index is susceptible to some consolidation of recent rather impressive gains as the leading Nasdaq-100 enters a corrective phase. However a sustained move below the trend mean would be required to begin to question medium-term scope for additional upside. 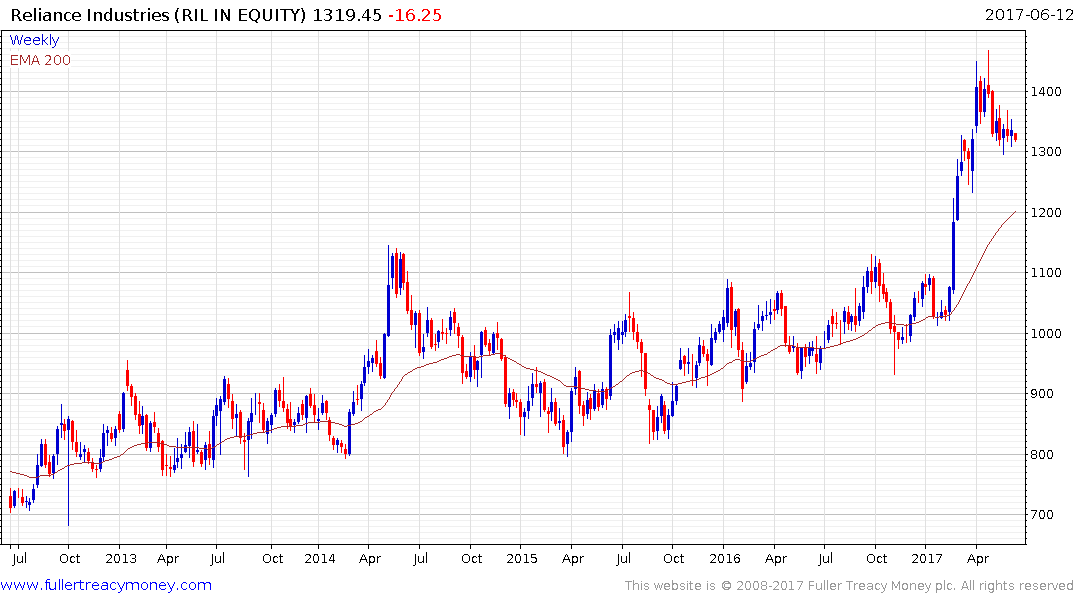 Anil Ambani’s Reliance Communications might be an example of some of the mal-investment referenced in the above report since he spent a fortune developing a fibre optic network. His brother at Reliance Industries went down the Wi-Fi route which is now paying dividends. 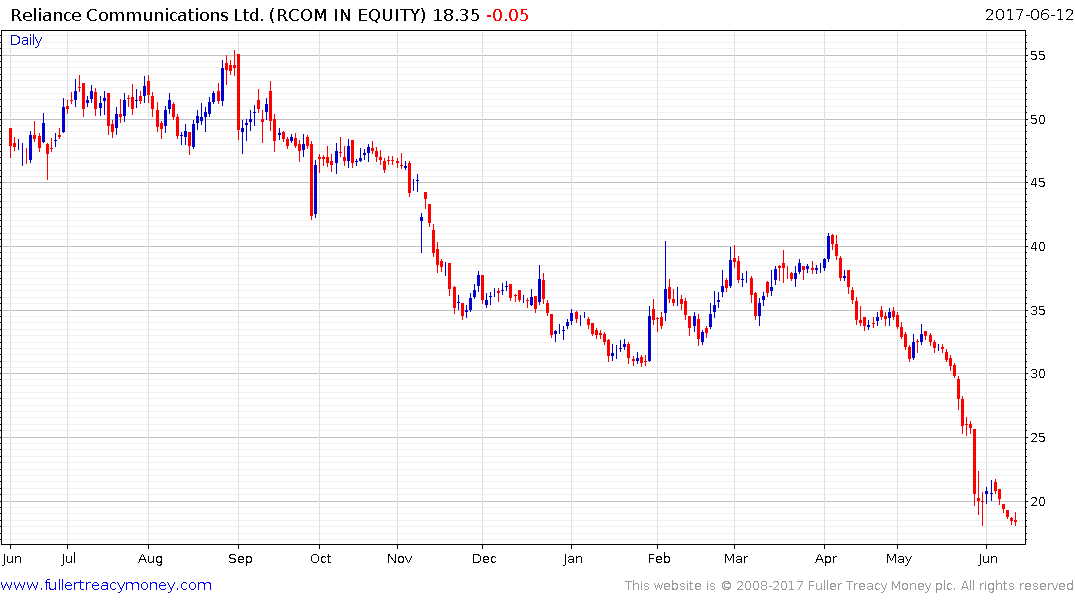 Reliance Communications collapsed in 2008 but has been trending lower again since 2014 and accelerated over the last two months; halving since April. It steadied three weeks ago near INR18 and has returned to test that level over the last couple of days. A clear upward dynamic would be required to confirm a return to demand dominance in this area.