Hiding From The Madness: An Alts Perspective On The Search For Capital Shortage
Comment of the Day

Hiding From The Madness: An Alts Perspective On The Search For Capital Shortage by Eoin Treacy

Like everyone else, Grice is attempting to parse the evolving socio-political environment. He likens the current media revolution to the effect the printing press had on the social makeup of Europe which led to the Reformation and 30 Years War.

That’s very much along the lines of my thinking which I generally discuss in the Big Picture Long-Term audio & video. Massive innovation in how we communicate inevitably leads to social disruption. Democratisation of access to alternative sources of information challenges the status quo.

The 30 Years’ War would not have started without the Counter Reformation which was inevitable given the threat to the religious status quo. It is therefore likely that future conflicts will broadly be between censorship and free speech.

Grice is also of the opinion that what we have right now are frothy markets but that this bubble is still inflation. Manias occur when central banks make mistakes. At present, central bankers believe they know how to deal with inflation and fear deflation above all else. They have said in plain English they have given up on predicting inflation. They now want to see it trend higher before even beginning to act against it.

Of course, this view of inflation is limited to the kind central banks monitor. They view higher asset prices as proof that their policy is working because it is evidence of animal spirits. They also do not view rising commodity prices as sufficient evidence of inflation because of their volatility. They are therefore unlikely to act in a decisive way to combat inflation until CPI inflation is trending higher in meaningful way. 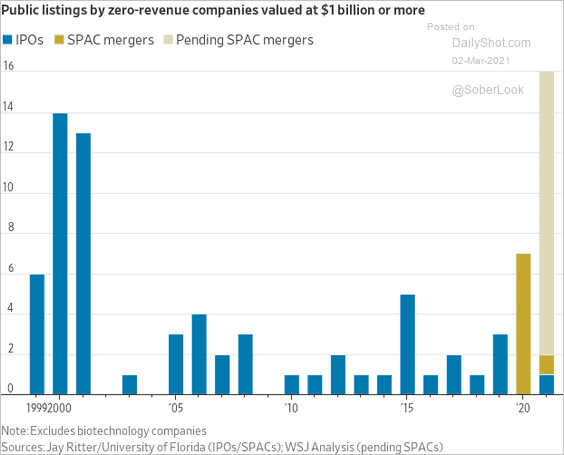 That suggests buying the dips is likely to remain the most productive strategy for the foreseeable future. The above graphic of the number of SPACs/IPOs with a value greater than $1 billion is where a lot of the fear of a bubble is arising from. However, a billion today is not what it was in the late 1990s. today companies can achieve billion-dollar valuations in days or weeks. Comparing the value of currency today with what it was more than 20 years ago just does not make sense. Instead, if interest rates stay low, SPAC volume is going to multiply from current levels.