Finally! The yen breaks 30-year support, a new round of currency turmoil begins
Comment of the Day

Finally! The yen breaks 30-year support, a new round of currency turmoil begins by Eoin Treacy

Why is China’s lurch into deflation on the GDP deflator, but not the CPI measure, so important? We have pointed out before (unfortunately we don’t have space for the chart here) that in Japan during the 1990s the thing to watch to see the havoc that deflation was wreaking on nominal revenues and debt/income loads was not the CPI, but rather the GDP deflator, which fell far faster than the CPI. Economic agents produce far more than just consumer goods and services and the GDP deflator is a much wider basket of goods and services and includes exports and investment goods. Clearly the descent into outright GDP deflation in China explains the more aggressive, even slightly panicky, policy easing measures there.

We also pointed out last week that China’s move into BoP deficit imposes a substantial monetary headwind on the economy. China may wish to keep the renminbi stable at this time while the IMF is currently considering including it in the SDR currency basket. But the economy is simply not in a position to withstand a major yen decline bringing down the currencies of its competitors in the region (and the additional deflationary impulse). I remain convinced that China must start guiding its currency down against the dollar and it can do that easily now it has a BoP deficit by doing absolutely nothing (ie not intervening any longer to hold it up)! China will also take the IMF’s recent declaration that the renminbi is no longer undervalued as justification for these actions - link.

Worrisome deflation is already being imported into the US, especially from Japan (see chart below). China (blue line) has yet to participate, but a further round of Asian devaluations will inevitably see waves of deflation heading westwards  as in 1997/98. Watch this data closely.

The Yen has been a catalyst for competitive currency devaluation across the Asian region since the BoJ initiated its QE program in 2012. As the Yen extends its downtrend there is potential that it will act as an additional incentive for regional competitors to devalue their currencies. 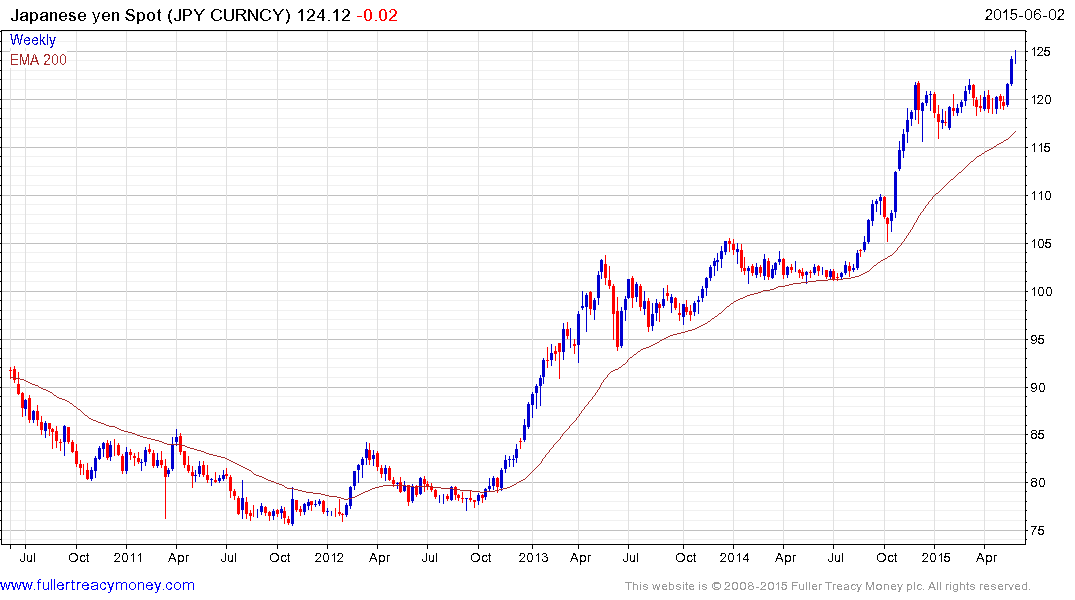 The US Dollar broke out against the Yen last week and a sustained move below ¥122 would be required to begin to question medium-term scope for continued upside. 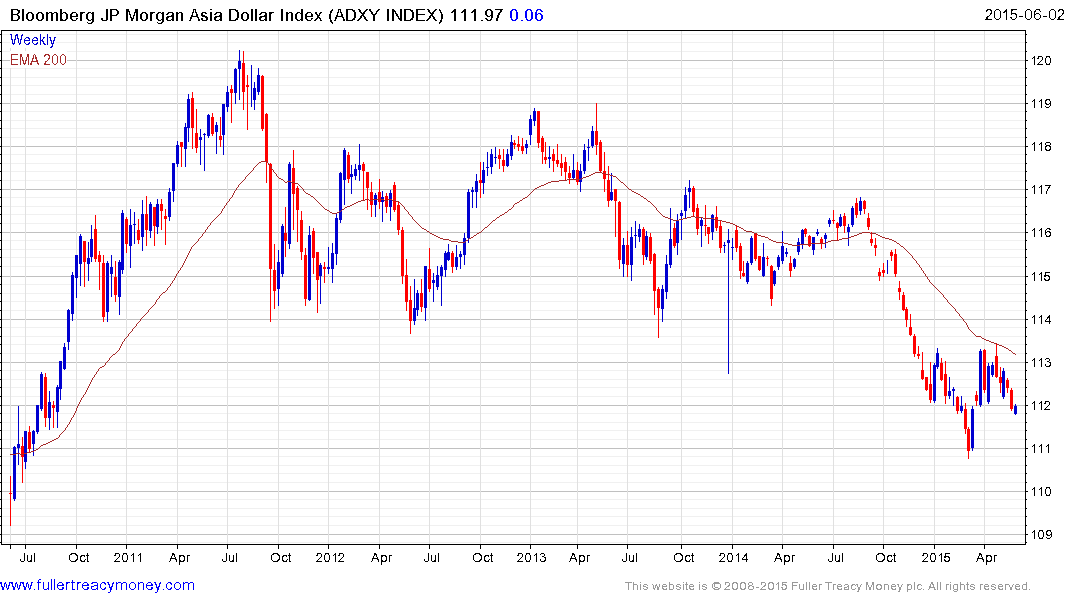 The Asia Dollar Index encountered resistance in the region of the 200-day MA and the lower side of the overhead trading range from late April. A sustained move above 113.25 would be required to question medium-term scope for additional lower to lateral ranging. 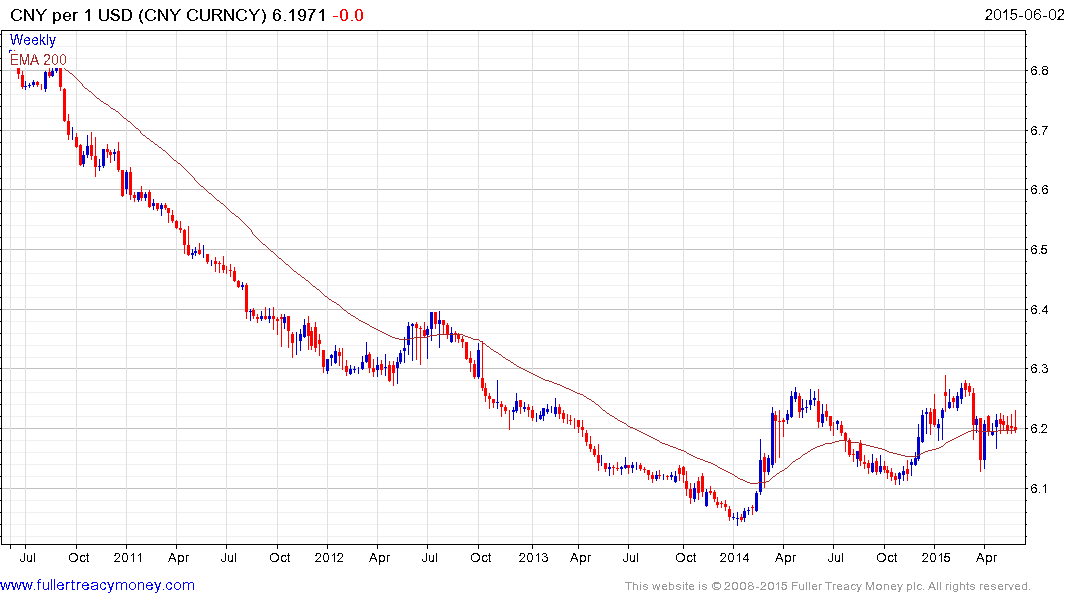 Against this background the Renminbi has been conspicuously steady not least because of China’s intervention to support it. The currency has been inert in the CNY6.2 area since mid-April.

It has been our contention for some time that the 2014 peak near CNY6 was about as strong as the Renminbi is likely to get. Using the currency as a policy tool is one of the main advantages a sovereign state has. While it is currently in China’s interests to have a firm currency, not least as it seeks to internationalise its capital markets, it would be rash to preclude the possibility that a weaker currency could be sought in future.

A number of Asian stock markets have lost momentum and are challenging areas of prior support. For example: 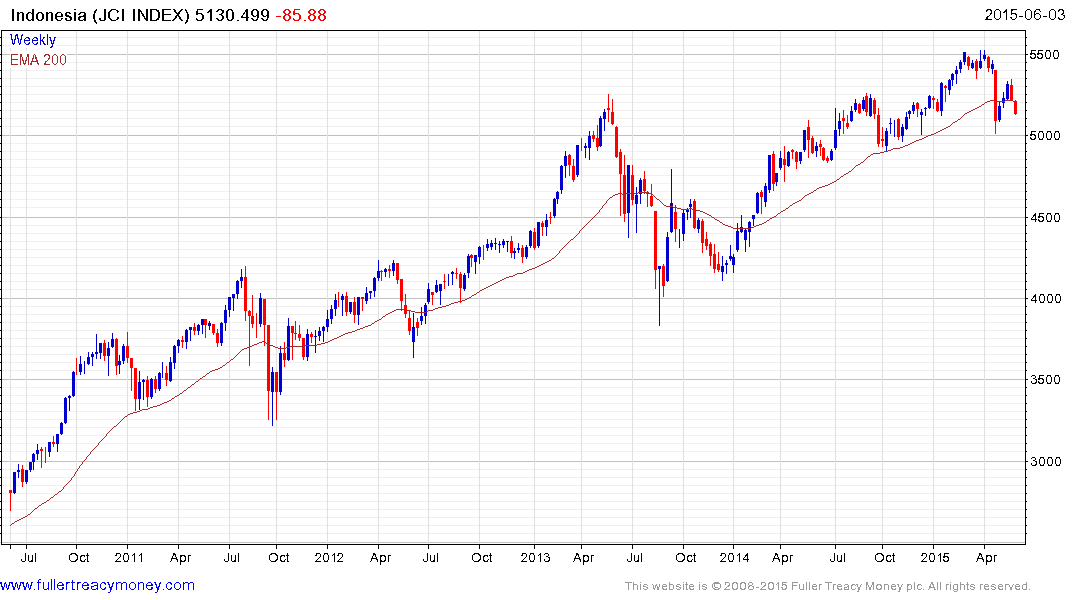 Indonesia needs to find support in the 6000 area if potential for additional higher to lateral ranging is to be given the benefit of the doubt. 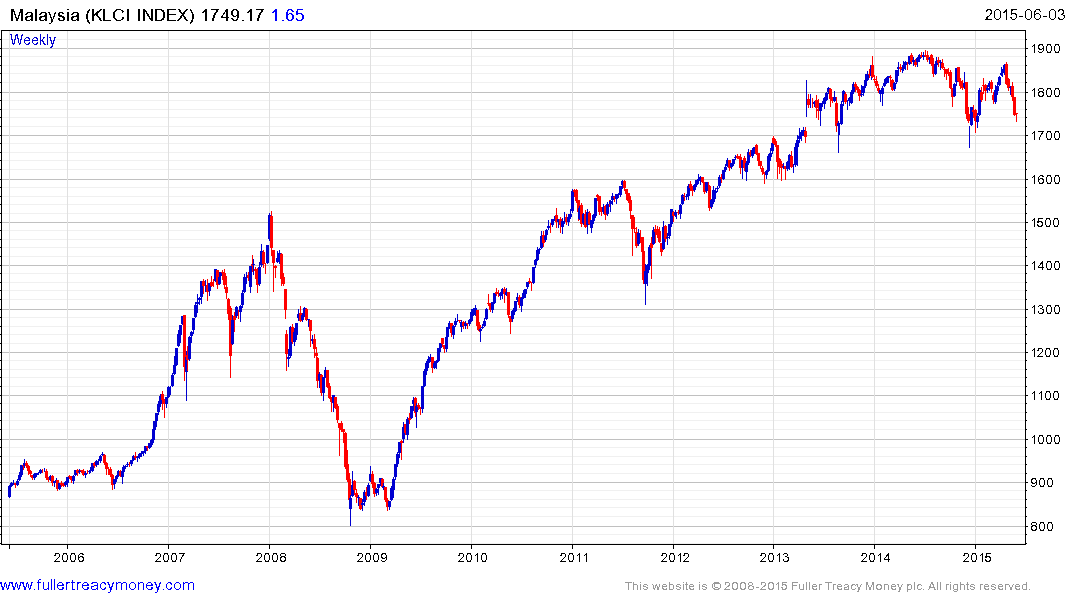 Malaysia exhibits a rounding characteristic over the last two-years and needs to hold above the 1700 area to avoid medium-term top completion. 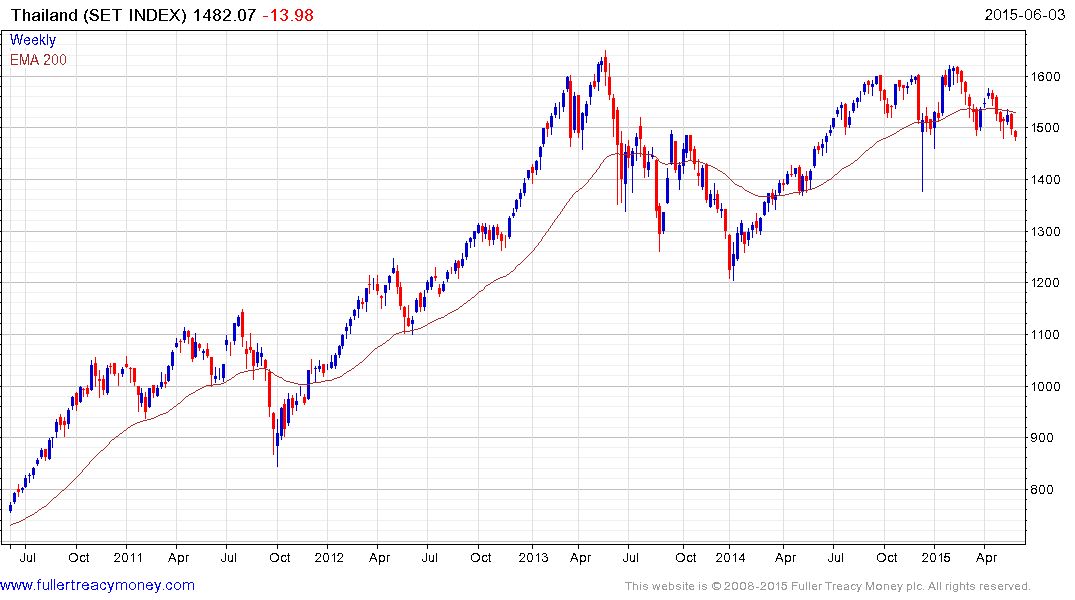 Thailand exhibits a rounding characteristic over the last year. 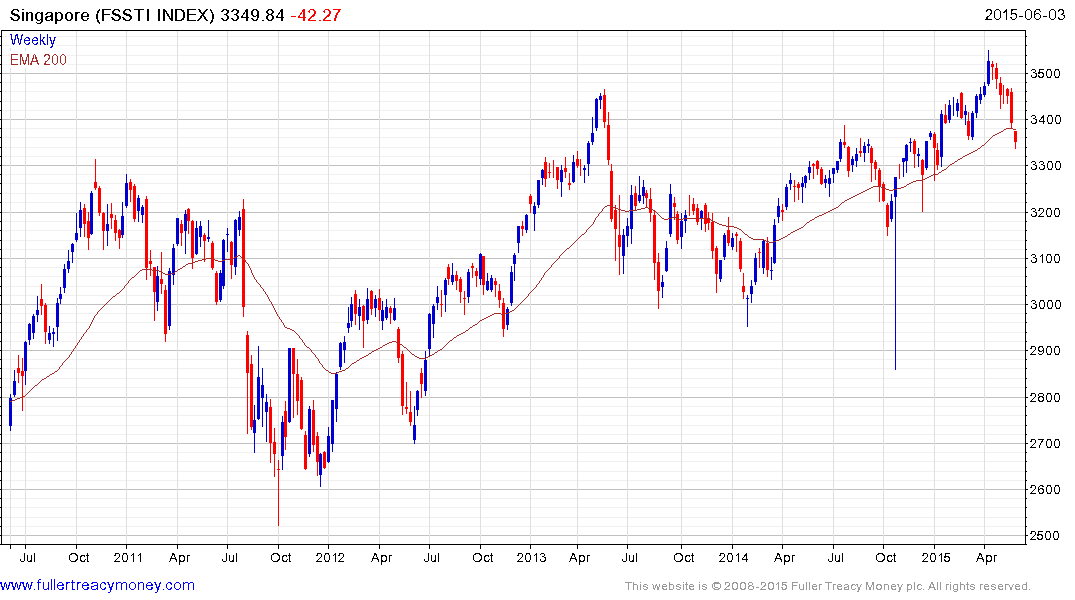 Singapore needs to find support in the current area if potential for additional higher to lateral ranging is to be given the benefit of the doubt.