The Federal Reserve should delay raising interest rates until the first half of 2016, the International Monetary Fund said as it cut its U.S. growth forecast for the second time this year.

The lender also said that the dollar was “moderately overvalued” and a further marked appreciation would be “harmful,” in a statement released in Washington on Thursday on its annual checkup of the U.S. economy.

“We still believe that the underpinnings for continued expansion are in place,” IMF Managing Director Christine Lagarde said at a press briefing in Washington. “The inflation rate is not progressing at a rate that would warrant, without risk, a rate hike in the next few months.”

That means the Fed should wait until early 2016, even if there’s a risk of “slight overinflation” relative to the central bank’s 2 percent target, Lagarde said.

I’ve met more than a few people in the course of the last week who nonchalantly predict the Fed will raise rates in September. I’m not so sure. Janet Yellen said she will raise rates this year if the data merits a move. This means she will wait until she sees what she is looking for. So far it is not present. Getting advice from a third party, welcome or not, is unlikely to have an impact on the Fed’s actions. 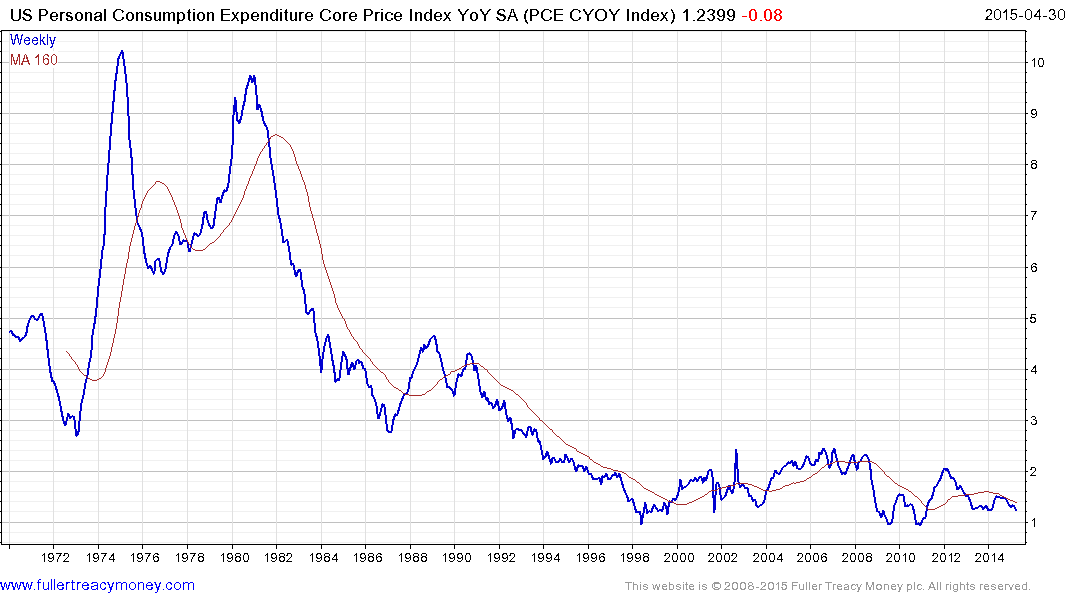 There is a great deal of debate about the rate of inflation but the measure used by the Fed is the PCE Deflator.  Regardless of where one might believe our personal inflation rate is the Fed’s measure is not trending higher. 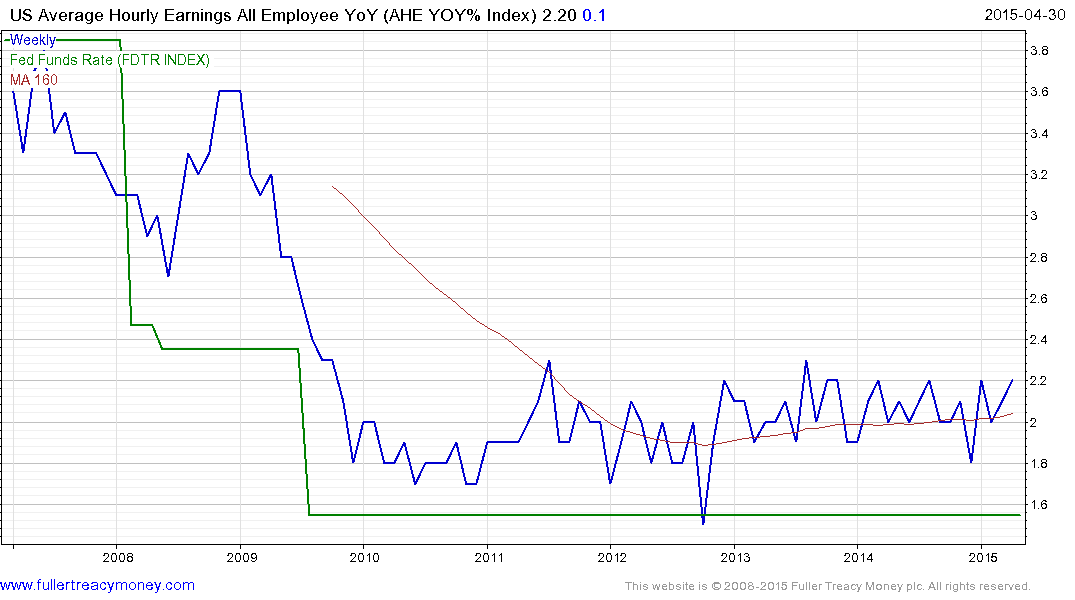 Wage growth and the Fed Funds rate have a high correlation. Wages are not a lead indicator because companies do not agree to pay more unless they really have to or because the labour market has tightened. However when wages rise they generally tend to be sticky so the Fed has to pay attention. So far US hourly earnings have been rangebound for five years and a sustained move above 2.2% will be required to signal a change. This article from the Wall Street Journal highlights the fact that even in this statistic there is room for reinterpretation since how they calculate the rate has already broken out.

The Fed has spent a great deal of money and political capital in avoiding a depression and achieving the growth it has. They simply cannot risk raising rates too early. Even if they do raise rates in September it will be because the decision is based on evidence so the above measures are worth watching before drawing any conclusion. An additional consideration is these data points are reported in arrears, which ensures the Fed will be behind the curve in raising rates.

Considering the fact that just about every other central bank is easing policy we can anticipate that the Fed will wait and see how the first interest hike affects markets before embarking on a second hike. After all, the Dollar’s strength has already had an effect similar to an interest rate hike. 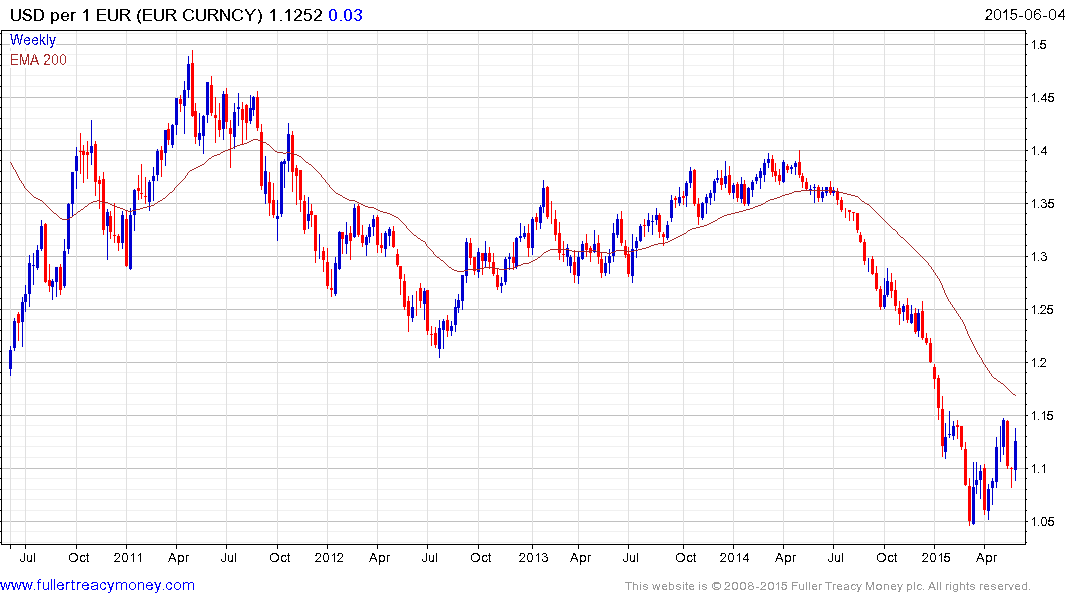 The Euro traded as high as 1.1380 today and continues to hold the progression of higher reaction lows from the $1.05 level. A break of the $1.08 level would be required to reassert Dollar strength. 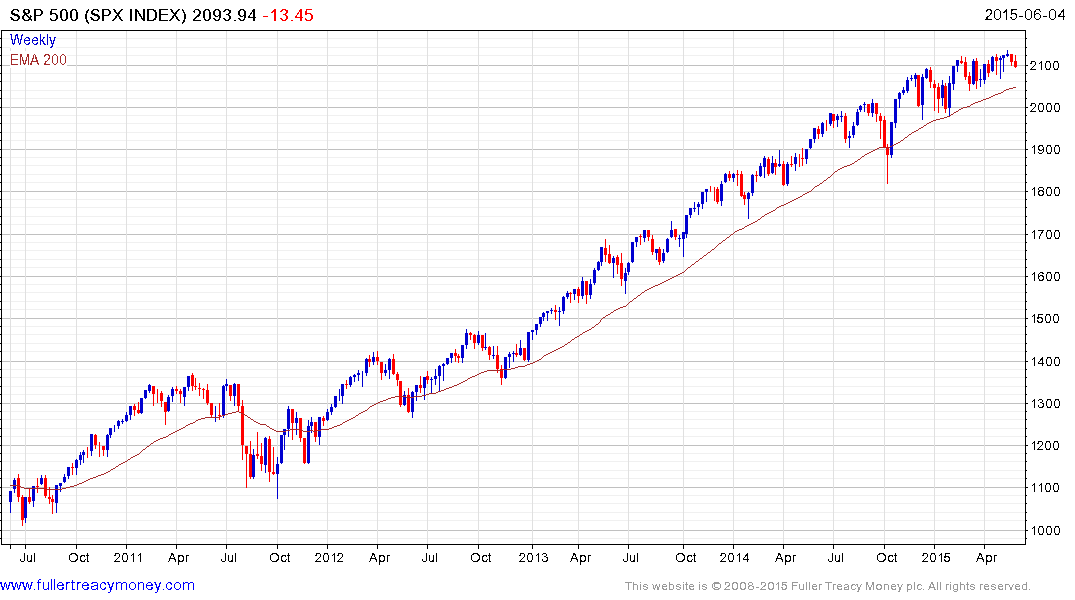 The S&P 500 has found support in the region of the 200-day MA on successive occasions since early 2012 and is currently pulled back to test the region of the progression of higher reaction lows. A loss of momentum is evident since the beginning of the year with the result that the last six months is developing a wedging characteristic. A fall below 2040 would break the sequence of higher lows and indicate a loss of uptrend consistency.