“This was definitely a dovish outcome and even a bit of a surprise,” said Ben Emons, managing director of global macro strategy at Medley Global Advisors in New York. “The Fed took out the entire rate hike scenario for this year.”

Reaction in markets confirmed the dovish interpretation. Stocks pared losses, the dollar turned lower and Treasuries rallied. Traders lifted the odds of the Fed cutting rates. In a separate statement Wednesday, the Fed said it would start slowing the shrinking of its balance sheet in May -- dropping the cap on monthly redemptions of Treasury securities from the current $30 billion to $15 billion -- and halt the drawdown altogether at the end of September. After that, the Fed will likely hold the size of the portfolio “roughly constant for a time,” which will allow reserve balances to gradually decline.

Beginning in October, the Fed will roll its maturing holdings of mortgage-backed securities into Treasuries, using a cap of $20 billion per month. The initial investment in new Treasury maturities will “roughly match the maturity composition of Treasury securities outstanding,” the Fed said. The central bank is still deliberating the longer-run composition of its portfolio and said “limited sales of agency MBS might be warranted in the longer run.”

The Fed has cemented its about turn around with today's statements. That confirms a somewhat bearish tilt in their reasoning since the only way a pause can be justified is if growth figures are downgraded.

Ending the run-off of the balance sheet was already expected, tapering from May is an additional bonus. Confirming no expected rate hike this year confirms the bond markets’ belief in the trajectory of rates. Reducing the quantity of mortgage bonds held is a new piece of news and is likely to further support Treasury prices. 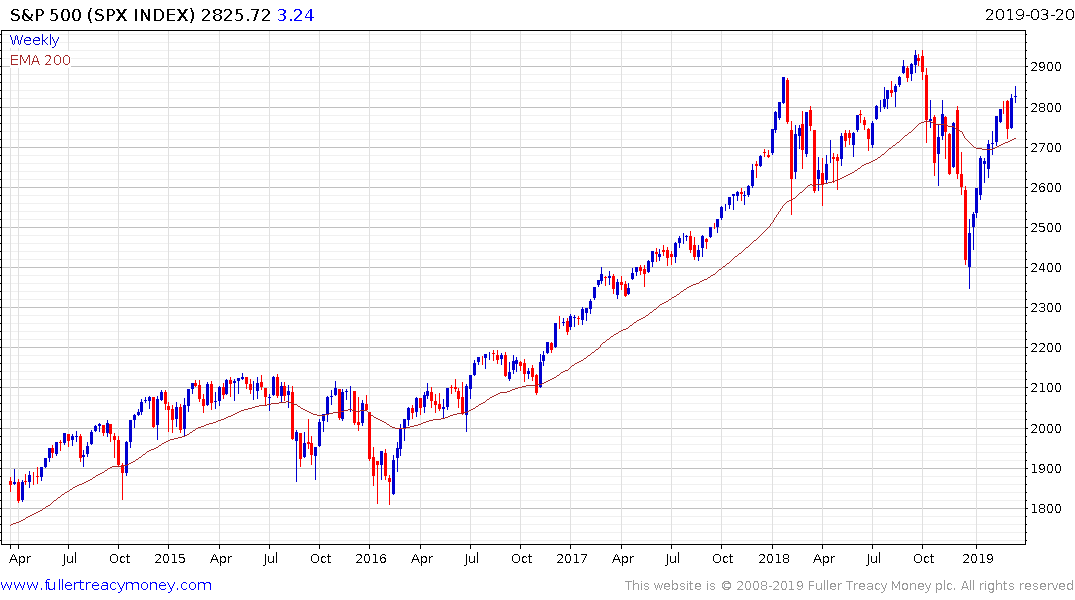 This remains a liquidity fueled bull market and the reaction of stock markets to today’s news confirms that. The S&P500 conitnues to hold above the psychological 2800 level. There is now potential for a run back towards the 3000 level over coming months.

Over the last couple of days there has been some commentary to the effect that the Fed is willing to tolerate somewhat higher inflation. In other words, they want to run the economy hot in order to create a self-sustaining inflationary cycle. That’s potentially positive for asset prices in the near term.

The Dollar is the clearest loser from the Fed’s dovish tilt. The shrinking of the balance sheet served to reduce the number of Dollar’s in circulation so that tailwind is now being removed. The bond market has concluded the next interest rate move is a cut so that is also removing any scope for interest rate differentials to improve. It was weakest against the currencies of commodity exporting nations. 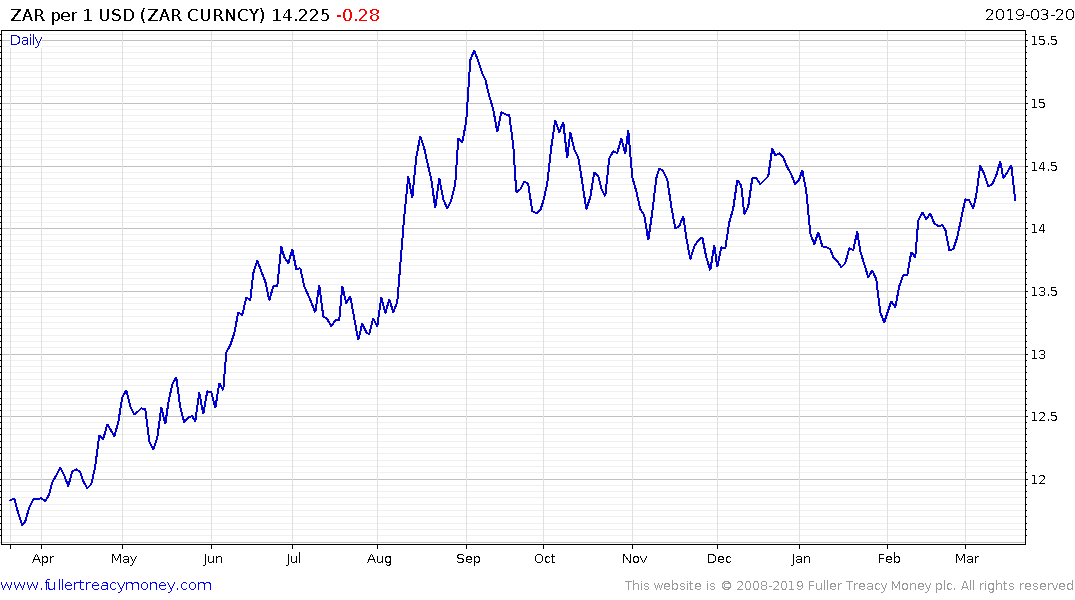 The Rand bounced to confirm its progression of higher reaction lows. 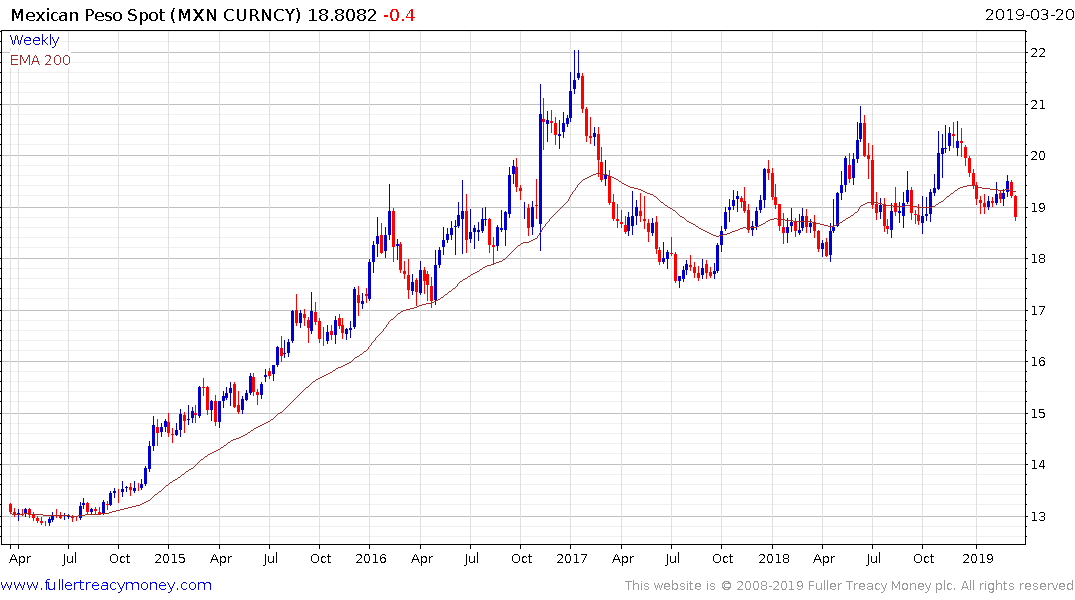 The Mexican Peso has broken its sequence of lower rally highs. 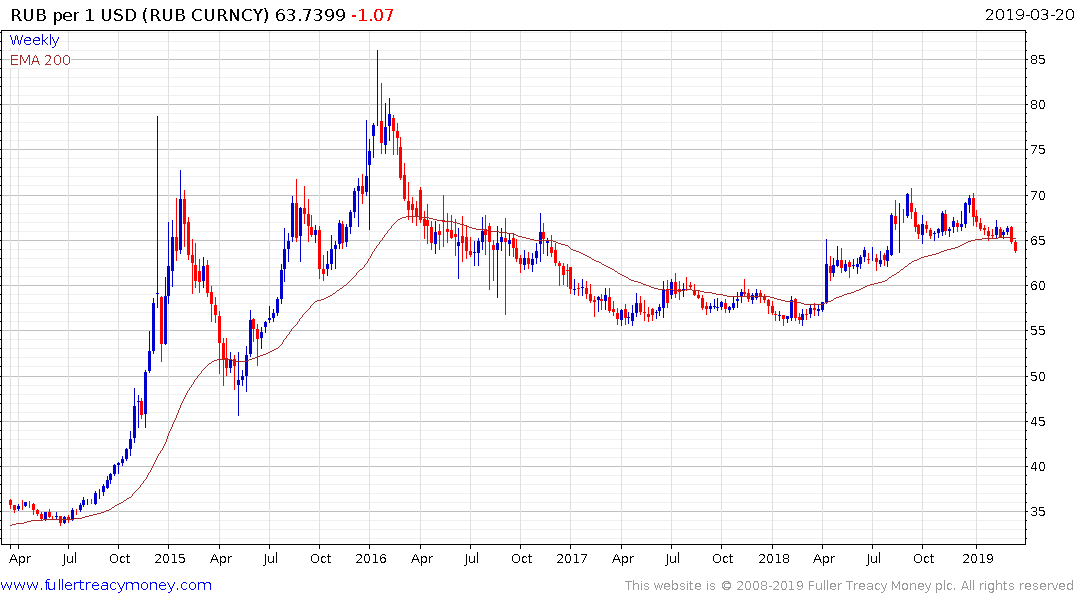 The Russian Ruble has broken its sequences of lower rally highs and is now trading above the trend mean. 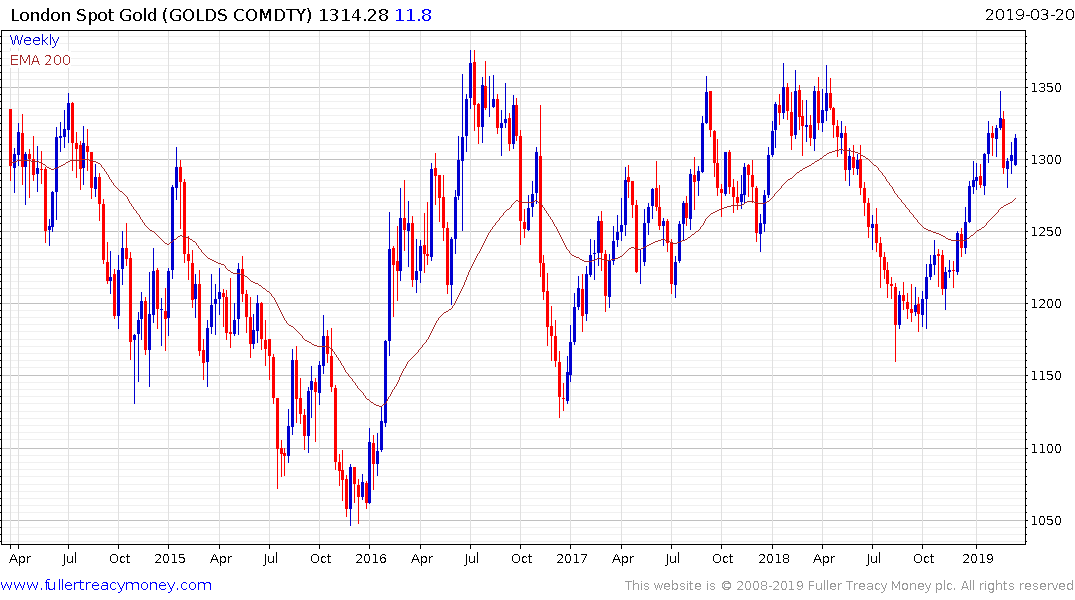 Gold continues to firm from the region of the trend mean. 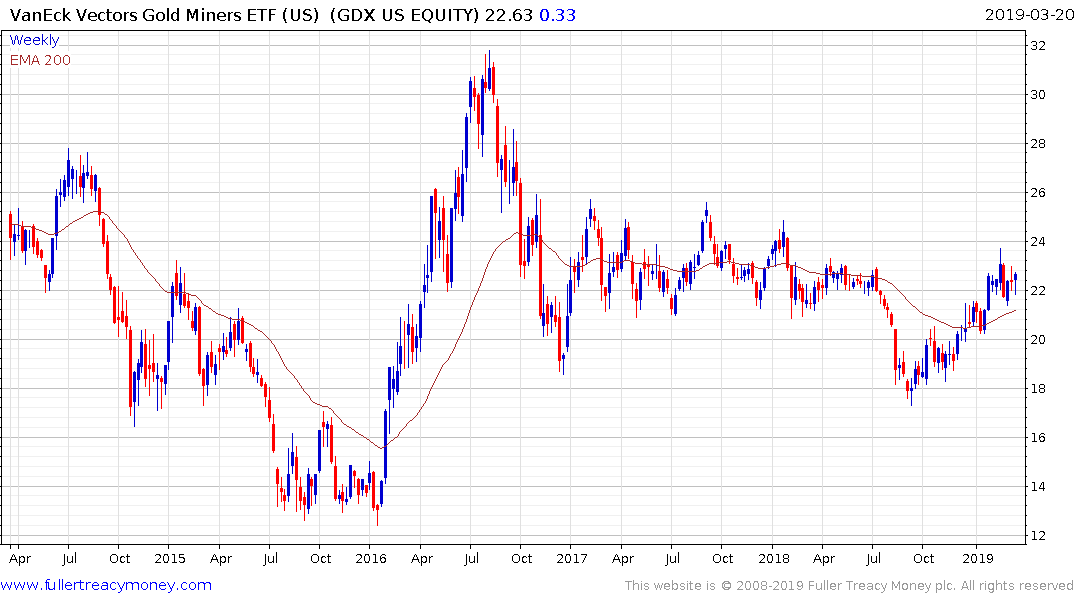