Traders are building the risk of Federal Reserve hikes back into interest-rate markets following news of
the most encouraging scientific advancement so far toward a coronavirus vaccine.

The sudden improvement in the economic outlook prompted a fresh burst of trade in Eurodollar futures, which are hugely popular as a low-cost way to play the Fed outlook. As daily volumes of contracts surged to the most since March, prices tumbled sharply, reflecting a flurry of bets on higher interest rates.

As front-end rates jolted higher, overnight index swap markets -- a proxy for the Fed’s policy rate -- show pricing for a quarter-point hike around the fourth quarter of 2023, and a second by the end of 2024.

ECB Easing
Rate hikes by the European Central Bank are not on the horizon yet, though investors trimmed bets on further easing and exited haven trades following the vaccine report. Money markets pared the odds of easing by almost half by the end of next year, betting on a 6 basis point rate cut, compared with 11 basis points at the end of last week.

BOE Bets
Similarly, Bank of England easing bets have been slashed, banishing the prospect of negative interest rates. Investors, who had bet on a 10 basis-point cut by August and sub-zero rates by the end of 2021, no longer expect the BOE to cut rates to 0%. Instead, wagers are for 7 basis points of easing by the end of next year.

There is a great deal of commonality in the government bonds markets at present. That is usually a sign that what is going on in the market is not isolated to a single market but is global in nature. 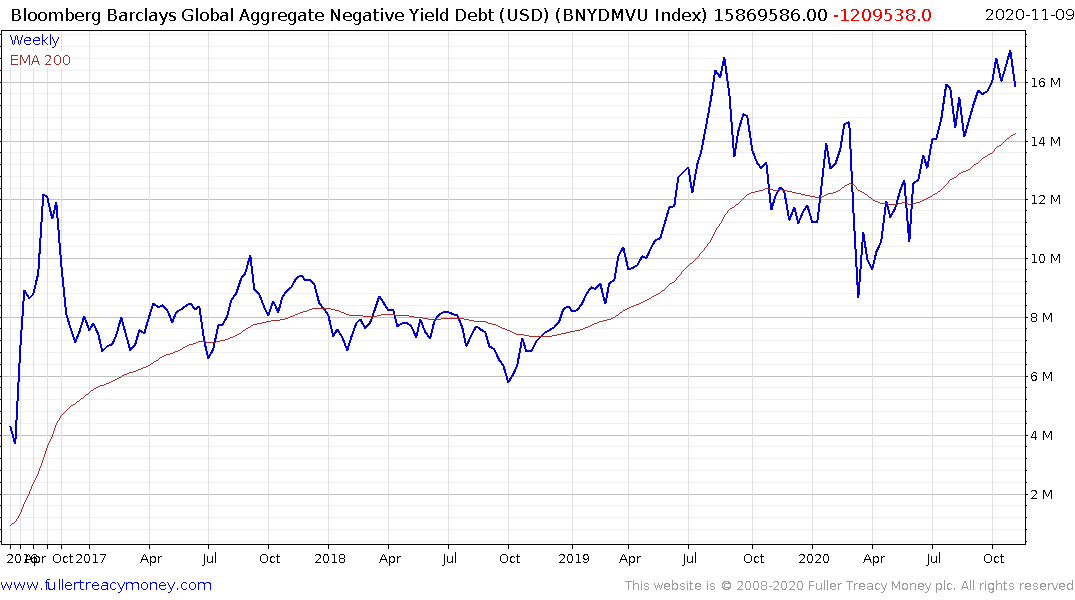 The total quantity of negative yielding bonds is a handy barometer for how much demand for debt is evident. It hit a new high last week and has pulled back this week. Downside follow through next week would confirm a failed upside break and greatly increase scope for at least a reversion towards the mean.

$1 Trillion in notional value of bonds moved into positive yielding territory this week amid speculation that vaccines will allow social distancing measures to be relaxed as early as the end of the first quarter. Meanwhile the number of treatments for the disease continues to increase with an antibody treatment from Eli Lilly receiving approval yesterday in the USA.

The EU is getting closer to approving its €1.5 trillion budget and the USA is expected to run at least a $3 trillion deficit next year. That begs the question how this money is going to be paid back. 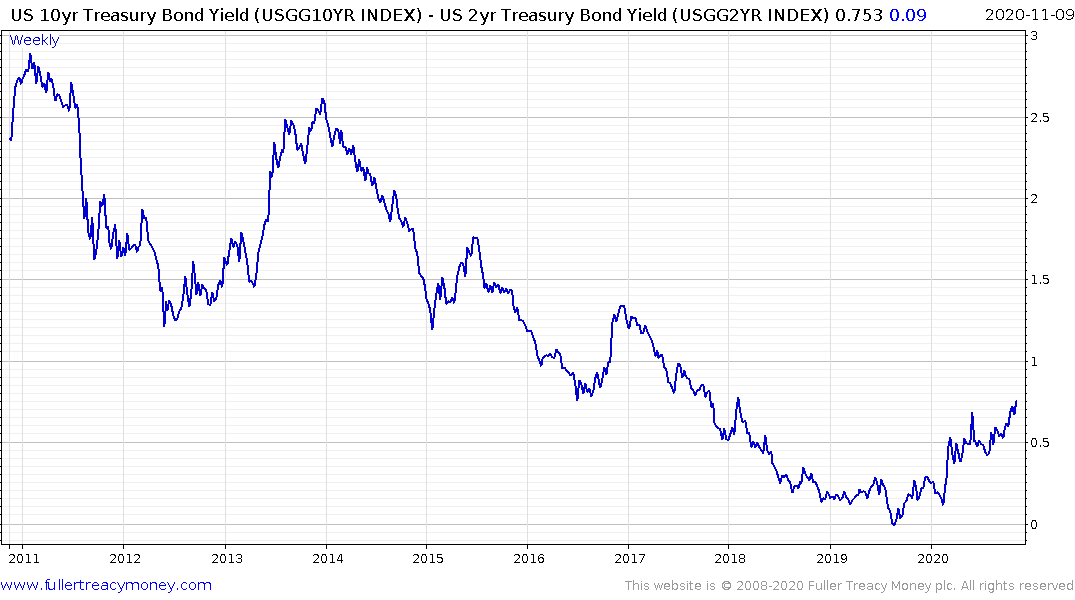 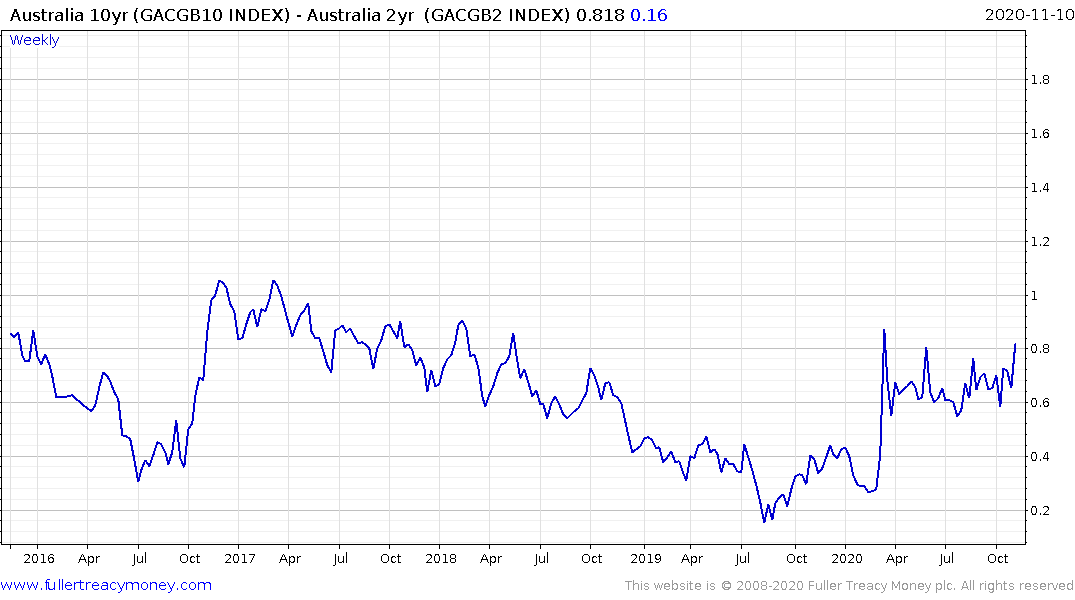 Yield curves are steepening just about everywhere but particularly in the USA and Australia. China’s yields continue to rise suggesting it will be the first country to raise rates following the pandemic. 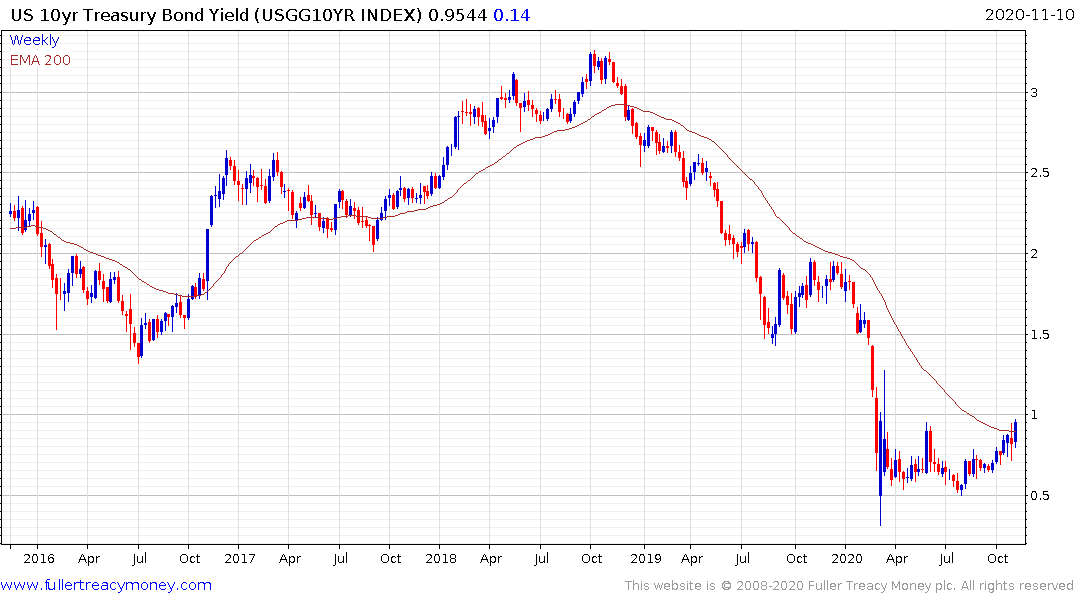 That’s consistent with the view growth is going to rebound in an impressive manner. However, historically, the time when the yield curve surges higher, following an inversion, usually coincides with stock market weakness. That was generally because the Fed was behind the curve of economic weakness. On this occasion they have been much more proactive in pre-empting economic weakness. It begs the question is this time truly different?

The other side of that argument is quantitative easing has generally resulted in higher yields because market supports favour speculation in growth assets with better potential returns. However, that is also because the bulk of purchases have been at the short end of the curve where yield increases were much less noticeable.

One thing we know for certain is that every 100 basis points move in yields represents $50 billion in additional interest expense on new debt for the US government. That money has to come from somewhere and there is no appetite for austerity. That either means higher taxes and/or printing. The pressure on the Fed to act and to buy long-dated bonds to support the recovery is growing by the day. 1% on the 10-year yield is an awfully big psychological level for investors.