If I am correct, I suspect we will see many Democrat candidates (perhaps all?) adopt MMT as a tenant of their platform. And here is a crazy thought for you - what if Trump beats them to it?

I have long argued that eventually we will hit a period where governments will spend and Central Banks will facilitate their deficits. MMT provides academic justification of where we all know we are headed anyway.

In one of the interviews I watched with Professor Kelton, she said that the idea of deficits being funded with bond issuance is purely a self-imposed limitation. It’s required by law, but in reality, it doesn’t need to be done. The law can be changed. The government could simply spend $100 while only taking in $90 and directly writing cheques against the Federal Reserve to pay for the $10.

Think about how inflationary this will be! But isn’t that the whole goal?

Left-wing politicians in the USA are jockeying for who can announce the largest tax on the “super-rich”. Last week the media were discussing an upper band of 70%, today Bernie Sanders is suggesting a 77% tax and the re-imposition of a heavy estate tax on fortunes over $3.5million. Meanwhile more and more politicians are adopting President Trump’s mantra that deficits don’t matter.

Faced with populist uprising and millions of people who are angry and animating for change, politicians are doing what they always do. Spending. The only answer they have to placate those who want to break the status quo is to promise them with more money. Some of that money might well come from higher taxes on the rich, however that term is defined, but that is unlikely to do anything to arrest the growth rate in government deficits.

The logical successor to synchronised global monetary expansion is synchronised fiscal expansion. Given the actions of the ECB, FED and PBOC over the last couple of weeks we might be looking at both simultaneously. The global economy is slowing and the number of countries in recession is growing. Against that background the Fed is now on hiatus. Generally speaking the market does not bottom until they are well into a rate cutting cycle.

I agree with the proponents of MMT that the only logical limit to debt accumulation in local currency terms is domestic inflation. However, that rationale is being made against a background where no one remembers the last inflationary cycle. They do not have an answer for what you do with the all that debt when inflation does in fact pick up. They also do not seem to have an answer for what these actions would do the currencies of perpetual deficit countries and the race to the bottom that would engender. 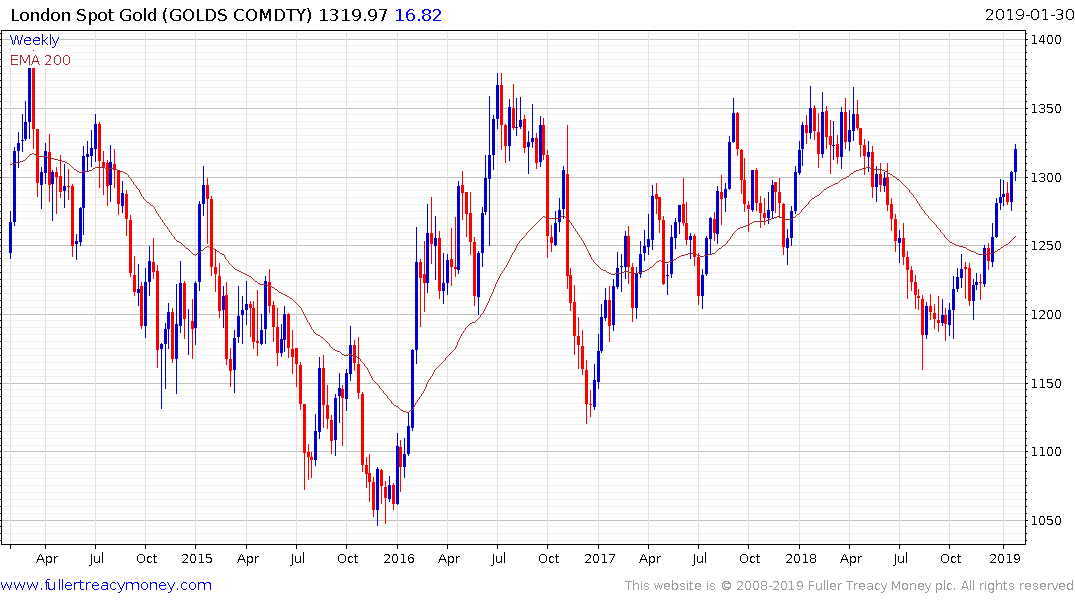 Little wonder investors are discovering a renewed interest in gold. 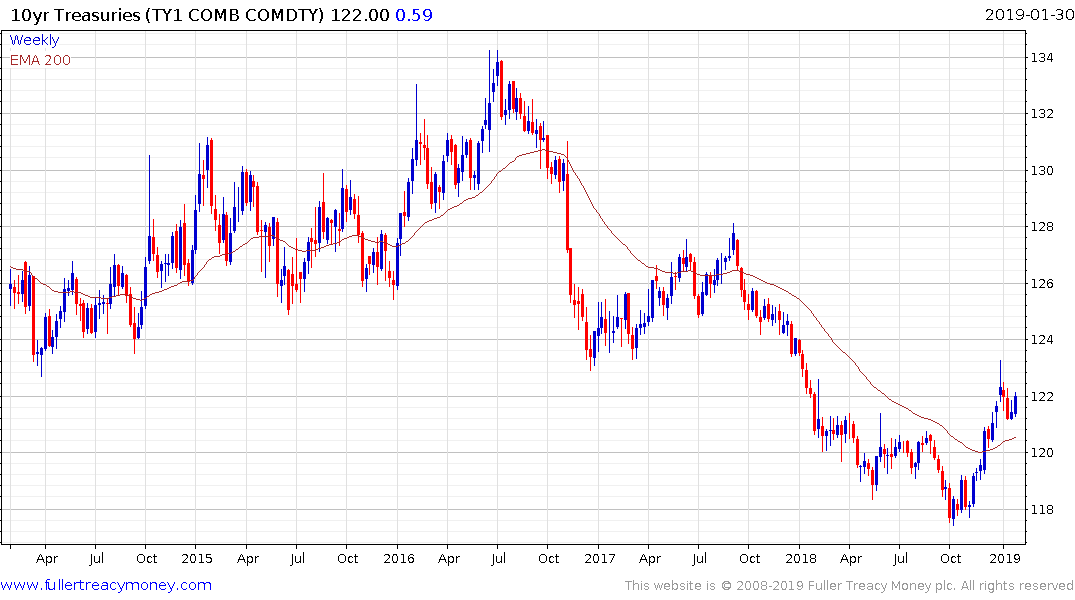 What then can we conclude from the continued rebound in bonds? It’s simple enough. Bond investors are convinced the next move by the Fed will be to cut rates, stop reducing the size of its balance sheet and potentially even start buying bonds again. The most important point is 121 was an area of resistance for Treasury futures until quite recently and now it is an area of support. Rumours of the bond bull market’s death need to be shelved until the price is trading back below the trend mean.