We have analysed price/mix over 14 years and conclude average price/mix across the categories and EM countries we have analysed was 2.6% in US$ terms; lower than the 3.1% (US$ terms) average of our DM comparator group, see Figure 6.

First, over the long-term, as the period 1998-2012 shows, EM growth in Staples relative to DMs is driven by population growth and higher per cap penetration; not perceived superior price/mix.

Second, although price/mix is illusory over the very long-term, over an extended period EM price/mix can be high, and superior to DMs, via an extended mis-match of the inflation/FX trade-off. Figure 6 shows that price/mix in EMs was 1.4% points ahead of DMs each year for ten years 2002-2012, post the impact of the 1997/8 EM crisis. We currently appear to be in the process of seeing 10 years of FX/inflation mis-match in EMs unwinding

Third, (and rather obviously) as the period 1998-2002 shows, an extended period of EM currency weakness can undermine EM top line performance. Current EM concerns have been prevalent for c12 months, but as we argue in subsequent sections, EM concerns currently are somewhat less extreme than they were in 1997/8.

Here is link to the full report.

One of the reasons we originally included so many consumer staples companies in our list of Autonomies is because they have truly global coverage and tend to dominate their respective niches. Many occupy sequentially higher rungs on the ladder leading to developed market levels of consumption allowing them to introduce additional products as per capita incomes increase. Due to their geographic spread of revenues they tend to have reasonably consistent records of dividend increases.

Consumer staples have at least paused over the last year as emerging market currency gyrations and questions centring on the efficacy of ambitious growth trajectories affected regional markets not least ASEAN. The sector is not cheap but may move to a position of relative outperformance as previously high flying sectors experience mean reversion. (Also see Comment of the Day on December 19th).

Among the companies mentioned in this report some of those with the most promising chart patterns include:

Unilever (Est P/E 18.54, DY 4.08%) hit a medium-term peak almost a year ago and has experienced its largest decline in more than four years. The share has stabilised above 2300p over the last six months and has developed a rounding characteristic consistent with accumulation. A break in the short-term progression of lower rally highs would be required to question current scope for additional higher to lateral ranging. 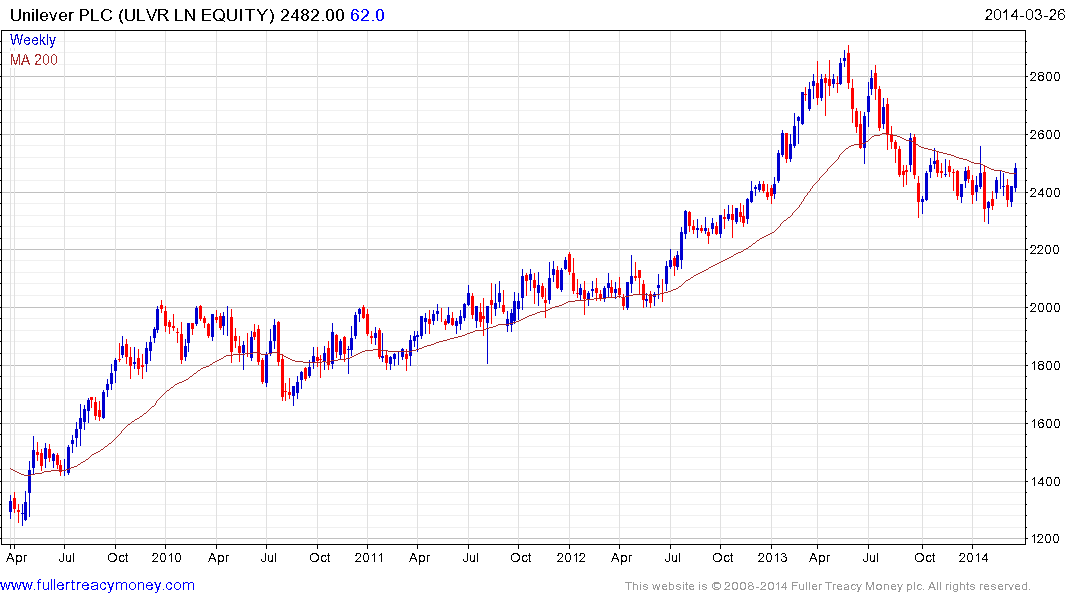 Danone (Est P/E 18.31, DY 2.77%) has returned to test the medium-term progression of higher reaction lows, since hitting a peak near €60 in August. The company’s denial that it wishes to acquire Mead Johnson Nutrition probably contributed to this week’s upward dynamic. A sustained move below €46 would be required to question scope for higher to lateral ranging. 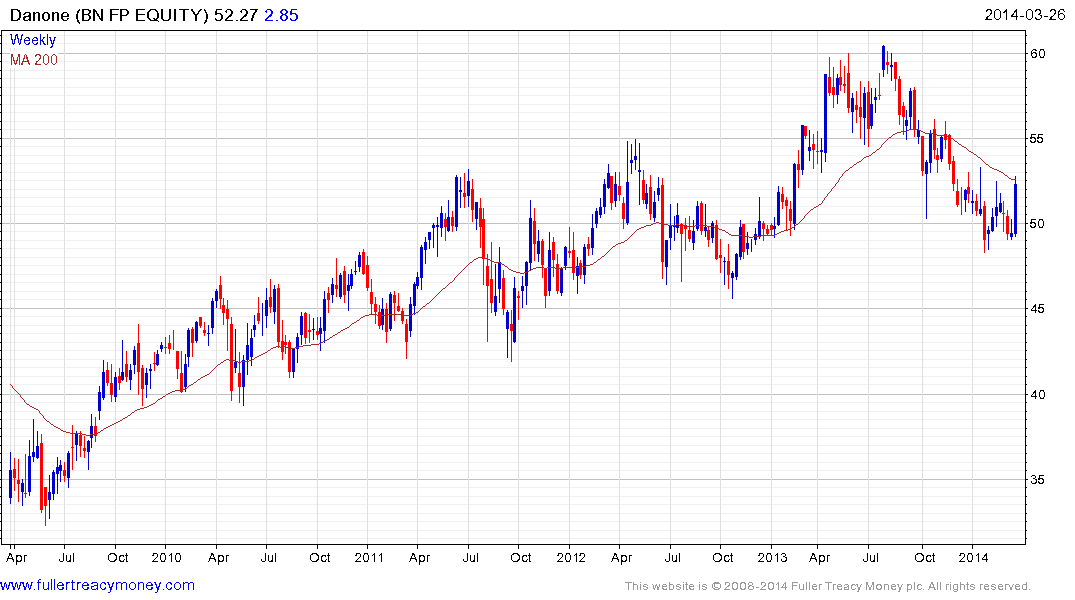 British American Tobacco (Est P/E 14.89, DY4.89%) lost medium-term uptrend consistency last year when it dropped below the 200-day MA for the first time since 2009. It rallied to close the overextension relative to the trend mean from early February and will need to hold above the 2850p low on the next pullback in order to demonstrate demand has returned to dominance beyond the short term. 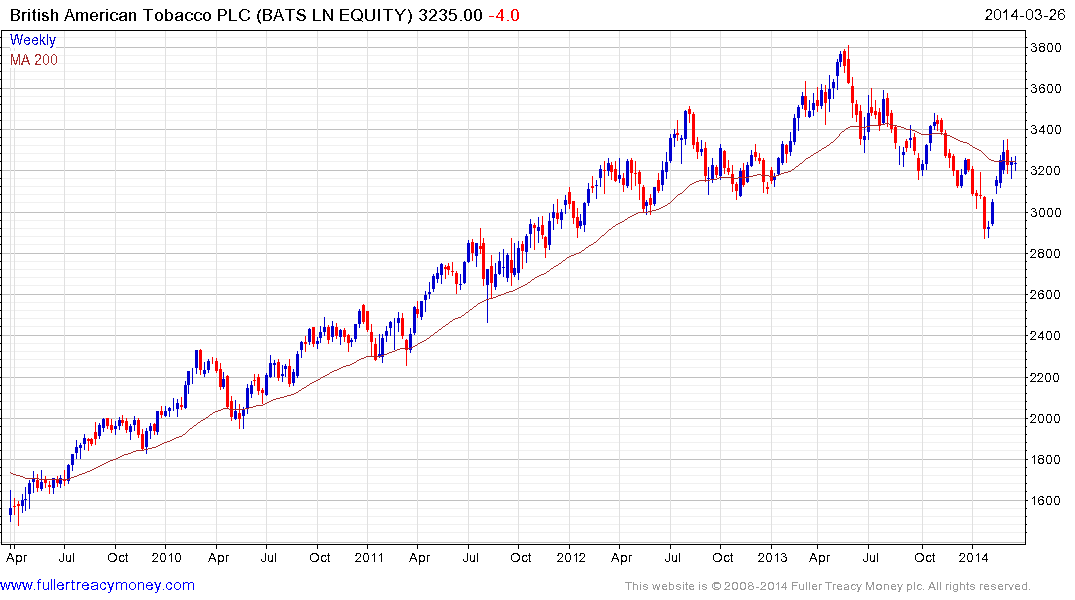 Heineken (Est P/E 16.26, DY1.85%) found support this week above the late January low and a sustained move above the 200-day MA, currently near €50, would reconfirm a return to demand dominance beyond the short term. 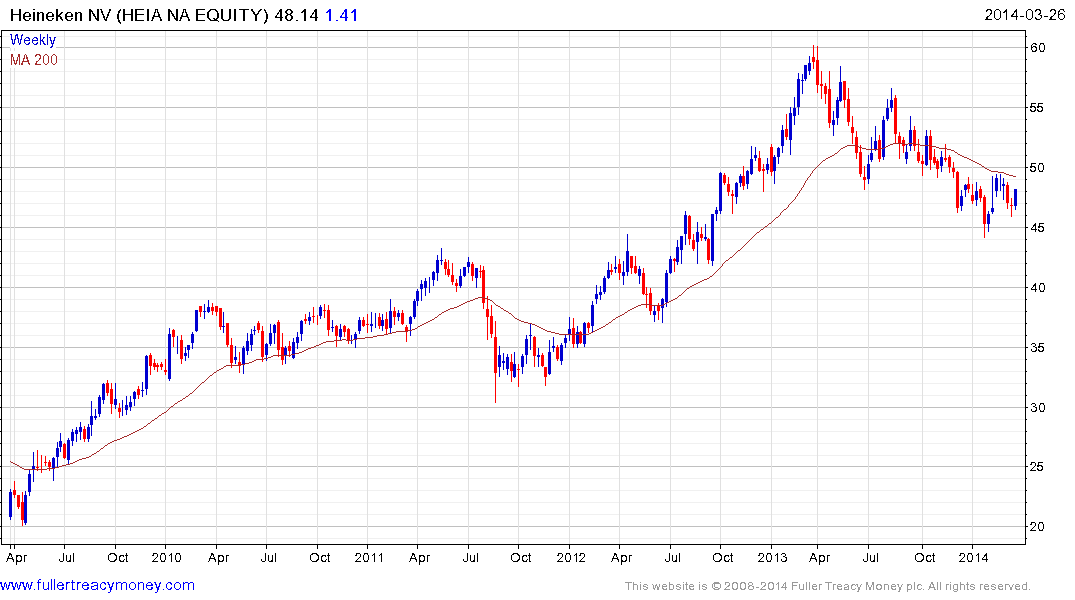 Pernod Ricard (Est P/E 17.94, DY 1.96%), in common with Remy Cointreau, has been among the companies most affected by the crackdown on corruption within China’s Communist Party. The share has stabilised near €80 and a sustained move above the 200-day MA, currently near €85, would indicate a return to demand dominance beyond the short term. 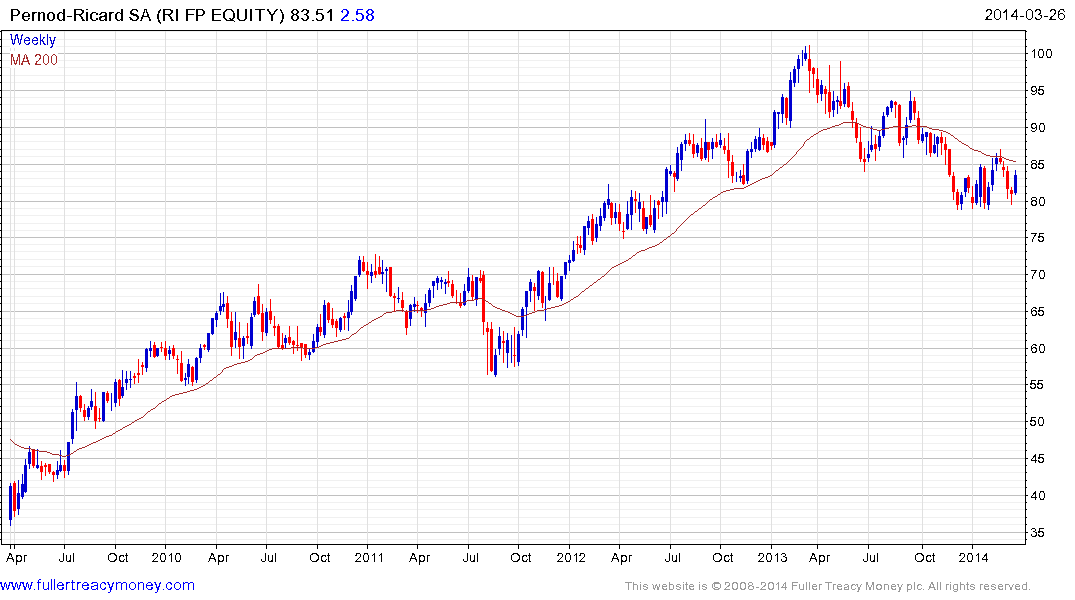