For 2014, we see the world in dualistic terms: upwardly trending 3%+ global GDP growth (good King Kong) pitted against Fed taper (bad Godzilla). The camera's lens will pan between the two combatants, and investor mood with it. There will be times when the big ape kicks butt and times when the giant lizard does. Such shifts will unsettle stocks; this is no time to abandon our "quality" refrain, particularly when many autonomies are correcting towards 200 day moving averages and looking cheaper. If Fed taper isn't Godzilla, something else will be. As seers say, making predictions is difficult, especially ones about the future.

From the dizzy height of mid-December, just a brief scramble away from the peak of 31st December, it's striking what a disappointing investment year it has been for "growth" in 2013. This has received scant attention in the media, perhaps because the throbbing heart of the global securities markets is still Wall Street, and Wall Street and its acolyte indices are up by about a quarter. So if you scribble for the NY Times or Bloomberg, allocate assets in Boston or just sport one of those colourful trader's blazers", life is dandy. But see what other markets have served up. The MSCI Emerging Markets index is down by -5% with Latam down nearly -20%. Asia, the poster child for growth, is flat as measured by the MSCI Far East index. So is China. Singapore is down by -3% and some Asian stretcher cases, usually currency and current account related, like Indonesia and India, were down by double digits if measured in USD. Japan alone (+ 50% in Yen, half of this in USD) has delivered the bacon, but Mr Abe in targeting +2% inflation -the Abe twist is to target it upwards, not downwards- has re-written the rule book. The grimmest groans of all come from gold bugs: the scoreboard shows -25% for the metal, -55% for the shares in 2013, and little respite till prices move up and gold's momentum-obsessed silent minority becomes more vocal. Since stock markets are now in "correction mode", little remission may be in store for the last 2 weeks, so expect some long faces at trustee meetings in January.

Disappointments also from our Global Autonomies, those year-in, year-out +10-15% growers, which have provided safe harbour as well as fabulous returns. Earnings have been fair, but prices damaged by the slow-down in that sexy area -developing countries- that gave them lustre in the past. Unilever -a quality rebranding and growth story almost without equal on the planet- reduced forecasts mid-year from mid-teens to single digits and is flat in 2013. Our other FMCG and Global Autonomy favourites largely failed to impress, though earnings were solid: Diageo, SAB and Nestle +5%, but Shell -4% and Heineken -8%.

Talking of which, here is our stock summary of one of our favourite Global Autonomies, an Emerging Middle Class theme holding, Reckitt & Benckiser (RB: LN). Reckitt is known as a world leader in household care and personal hygiene. Its products -Dettol detergent, Strepsils cough drops, Durex condoms, Finish washing up powder- are mundane but essential adjuncts to 21st century life and sell in dozens of different geographies. For the greater part they have been around for decades, some for more than a century. Reckitt's brands are acquired as single items over the counter, for a few pounds, usually at an outlet "near you". They generally satisfy real current needs rather than imagined future wants, and their purchase requires a decision that takes about as little time or thought as brushing your teeth. A 10 year summary of Reckitt (7 years historic and 3 years looking forward (IBES consensus forecasts) shows Reckitt grows sales by +9.1% and earnings by +14.0%. It never endures a down year and the lowest sales increase is +1.0% and lowest earnings increase +1.4% (2012). It increases annual dividends by an average of +14.4%, an increase that doubles the yield of 2.9% to 5.7% over 5 years. Truly Reckitt is the steadiest of Eddies, the most normal of Normans. Yet look at the chart -bottom centre- of its share price relative to two dozen stock markets of the world, several thousand stocks, few of whom possess the desirable characteristics of a Reckitt. It has lurched up and down like Godzilla's tail in a King Kong tussle. This could be worse in 2014.

Here is a link to the note quoted above.

Let’s have a look at the global Autonomies mentioned above, on 10-year candlestick charts which also show 200-day moving averages.  I have listed them in the sequence mentioned by Iain Little and shown UK listings where possible: 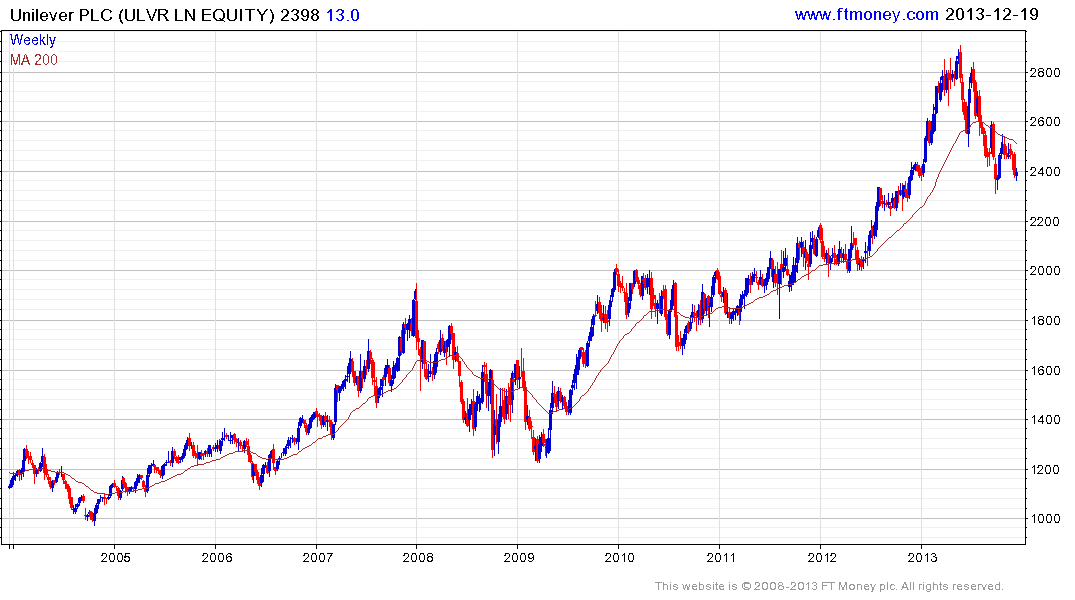 1) Unilever (ULVR LN) became very overextended relative to its MA earlier this year and peaked with a weekly key reversal.  You will also see a similar experience following the peak at the beginning of 2008.  There was also a sizeable overextension at yearend 2009, which checked upward progress for several years.  Note also the overextensions to the downside, particularly in 4Q 2008 and 1Q 2009.  By now, the message should be very clear – big upside trend overextensions relative to MAs are very dangerous and eventually followed by extensive corrective phases.  Similarly, clear downside overextensions for quality shares - whether due to global trends, fashion or temporary corporate difficulties – are usually buying opportunities for the medium to longer term. 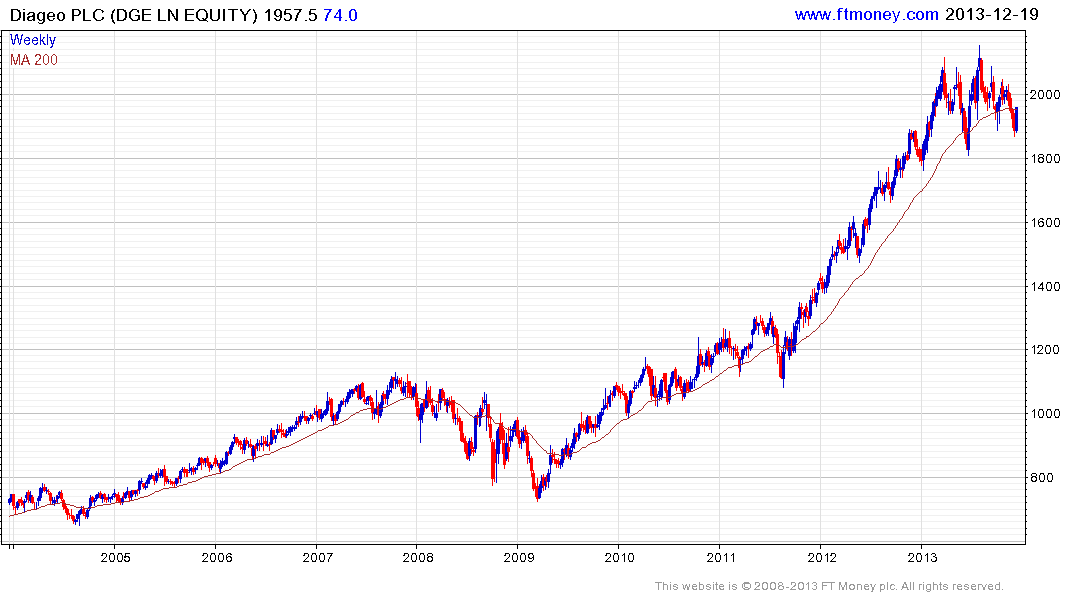 2) Diageo (DGE LN) was a trending dream from its August 2011 low through the first quarter of this year, before a weekly key reversal signalled selling pressure.  The subsequent choppy action looks like a developing Type 3 (churning time and size) top formation.  The share is likely to range at best.  Note the downside overextensions in 4Q 2008 and 1Q 2009.  I would be wary of this very successful Autonomy until the price has either ranged for a few years or retraced more of its significant advance. 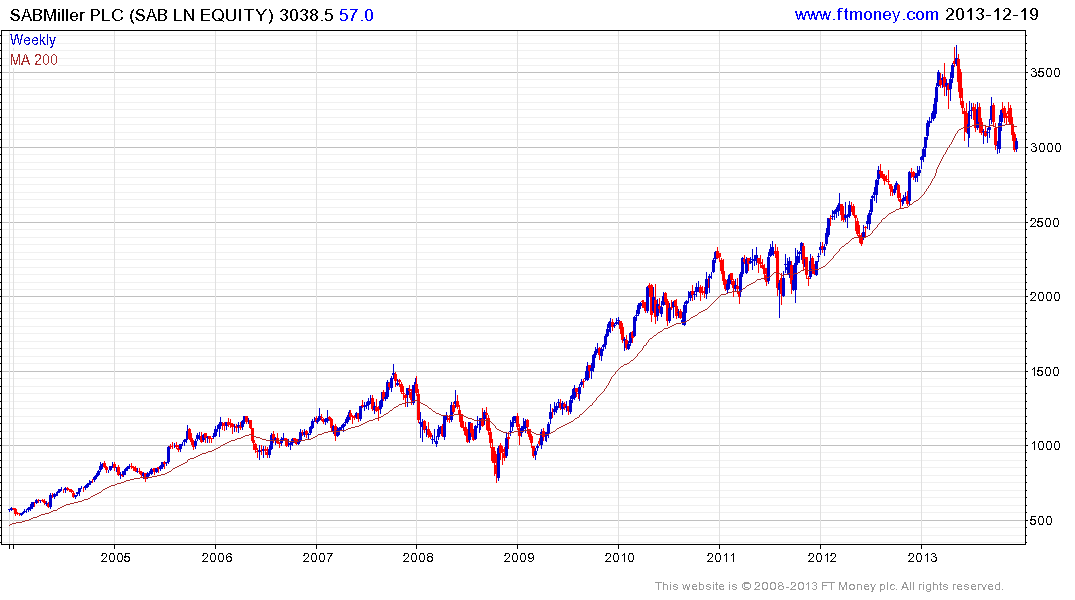 3) SABMiller (SAB LN) is quite similar to Diageo above and I would be cautious until it has seen a clear downside overextension. 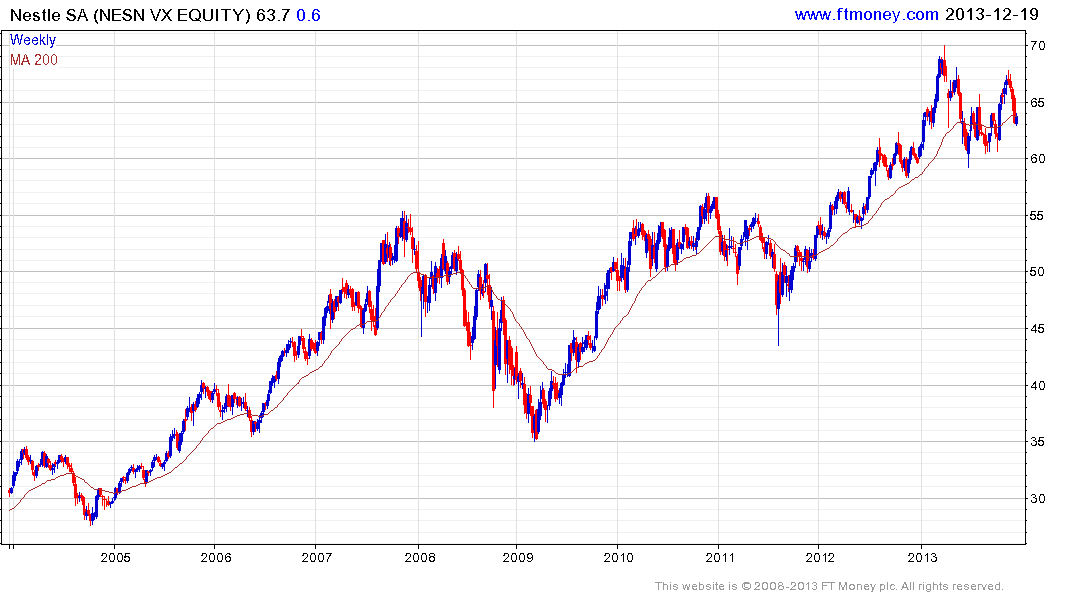 4) Nestle (NESN VX) peaked with a weekly key reversal at the beginning of April.  I would be less worried about this share as it has had a more sedate performance than Diageo and SABMiller above.  Nevertheless, the advance since 3Q 2011 was significant so I would feel more comfortable about this share when it is closer to 55. 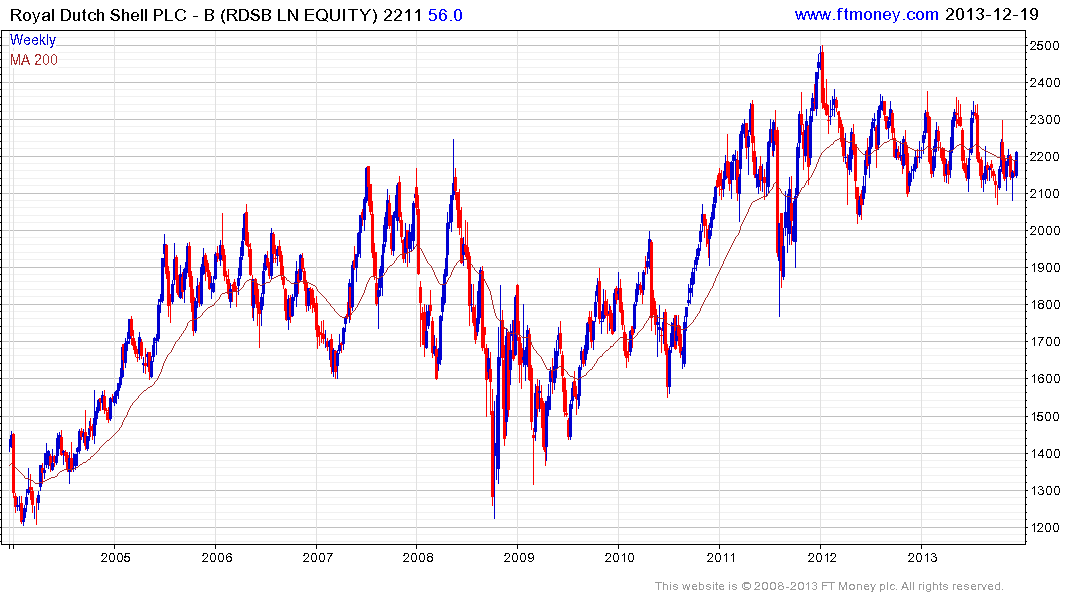 5) Royal Dutch Shell B (RDSB LN) has been a dull performer in risky, cyclical industry which does not have the fast moving consumer goods (FMCG) appeal of the other Autonomies above.  However, the tradeoff for this energy giant, in which I have built up a stake, is value at today’s prices.  The yield is over 5% and the current and estimated p/e ratios are just above 10, according to Bloomberg.  Nevertheless, Shell’s management needs to improve its game to win a higher rating. 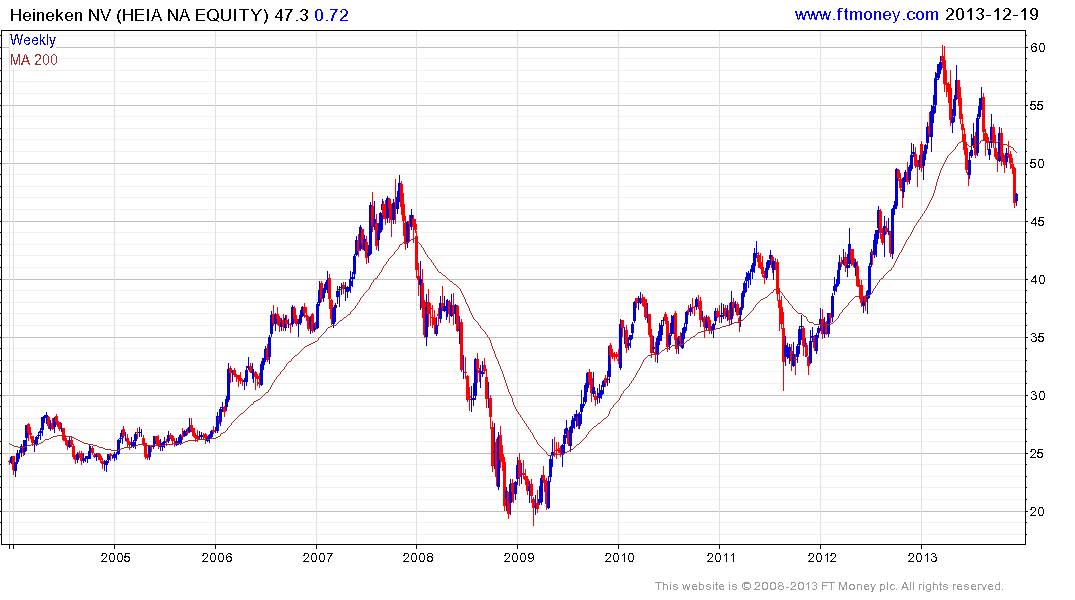 6) Heineken (HEIA NA) became very overextended relative to its MA in April but has now had a significant pullback and is beginning to look interesting once again.  Evidence of support building in the 45 region, let alone even lower, would be encouraging.

7) Reckitt Benckiser (RB/ LN), favoured by Iain Little above, is interesting because it has only seen one strong move up out of its three year trading range established from 2010 through 2012.  Therefore the current range may be no more than a lengthy consolidation of those gains and it is no longer overextended relative to the MA.  RB’s yield is respectable at 3.29% but its estimated p/e is not cheap at 17.60.  However, that could come down somewhat over a longer ranging period.

In conclusion, the problem for most of these shares today is that after a 5-year bull market they are no longer cheap.  Therefore, how do we achieve further gains?  There are several possibilities: 1) A continued monetary stimulus which can lead to higher valuations; 2) GDP growth which should occur but is likely to remain slow for the lengthy medium term; 3) Superior management which is able to increase revenue due to a possible combination of successful marketing, product enhancement, and cost savings due to technological advances; 4) Earnings ‘growth’ achieved by corporate share buybacks.

Of these, 2 and 3 are the most effective but a faster rate of national or preferably global GDP growth cannot be achieved by individual corporations.  Of the other two, 1 can only be achieved by central banks and too much stimulus ends badly.  The 4th possibility of share buybacks will increase earnings without additional revenue but becomes more difficult and costly as interest rates normalise.