Email of the day on valuations, Dow/Gold and anti-trust:
Comment of the Day

Email of the day on valuations, Dow/Gold and anti-trust: by Eoin Treacy

Thanks for your comments which are very interesting, especially your focus on technology and its potential to alter radically the investment landscape.

I have 2 points of my own to make. Using gold as the standard of value for stocks is interesting but I would think valuation metrics are more useful. As you know the Shiller PE, derived by comparing the S&P to the 10-year moving average of real corporate earnings- GAAP (not adjusted)- is at the highest level since the TMT bubble popped in 2000. The ratio of market value (the Wilshire 5000+) to GDP was at all-time highs in January. We have lived through a decade of extraordinary monetary policy (almost zero interest rates and QE), which is now being reversed. I think S&P market value to S&P sales may also be at all-time highs, but I may be wrong about that.

So the starting point is pretty rich. The PE is at 25 times 4 quarter GAAP earnings, implying a 4% earnings yield. The Moody's Baa 20-year bond yield is around 4.6% so the equity premium has been negative the last 5-6 years for the first time since 1961 when the Bloomberg series started. On average equity holders over this period have earned a premium of 1.62% to reward them for investing in the riskier part of the capital structure, but now they must pay for the privilege.

However, this does not address your major point about the enormous earning potential of companies involved in future technology. Now a standard criticism of your point is that competition between businesses will reduce the excess profits to "normal profits". What economists call "consumer surplus" consists of the extra value that is transferred from businesses to consumers for free due to the operation of the competitive market which eliminates excess profits.

This flows from the ideal world of independent competitive enterprises. Anti-trust laws in the USA have been around since 1890 (Sherman Anti-Trust Act) and were designed to cause real world behaviour to better approximate the theoretical.

What I have found interesting is that Anti-Trust is no longer as big a deal as it was when I was a student. In fact, when Mark Zuckerberg testified he named 5 or 6 tech companies that are competitors of Facebook's. In this list he mentioned WhatsApp and another company (Telegram?) that he has already bought and perhaps one or two others. He also mentioned Skype, which Microsoft has bought. The big tech companies have the where with all to buy smaller rapidly growing companies and maintain tight oligopolies and thus earn outsize profits. I doubt whether many of these purchases would have passed muster from the Department of Justice's Anti-Trust division one or two generations ago.

So the key may be to watch politics and see whether the populists at some point turn their attention to Anti-Trust.

Thank you for this detailed email which has given me much food for thought. As you point out there is a tendency among the producers of widgets to encounter competition which reduces the price to often unprofitable levels. At that point some of the weaker producers go out of business and a process of consolidation unfolds. The competitive Amazon marketplaces is a good example of this where producers of widgets compete on price to gain market share only for many to disappear after a relatively short time to be replaced by lower cost producers.

However, there are also sectors which, as you point out, have been dominated by oligopolies for lengthy periods. Coffee, tampons, iron-ore, water, chocolate, running shoes, aircraft, beer, tobacco, cosmetics, industrial gases among other all fit into this category which is why I made a point of identifying the clear leaders in a sector when formulating the list of Autonomies.

This drive for oligopoly is referred to as a moat in the technology sector.  Search, ecommerce, streaming, microchips, big data, social media companies all strive for this kind of dominant market positions. Facebook by acquiring WhatsApp and Instagram helped to secure its moat while the continued questions about Snapchat is that it does not have enough of inhouse IP and infrastructure to secure its own future.

I think it can be argued that the adoption of a subscription business model facilitates the preservation of brand loyalty because the consumer has so much more of a vested interest in continuing to participate with the brand over the medium to long term. That has been a particular innovation for the technology sector which has transformed highly cyclical businesses into something akin to high growth consumer staples. 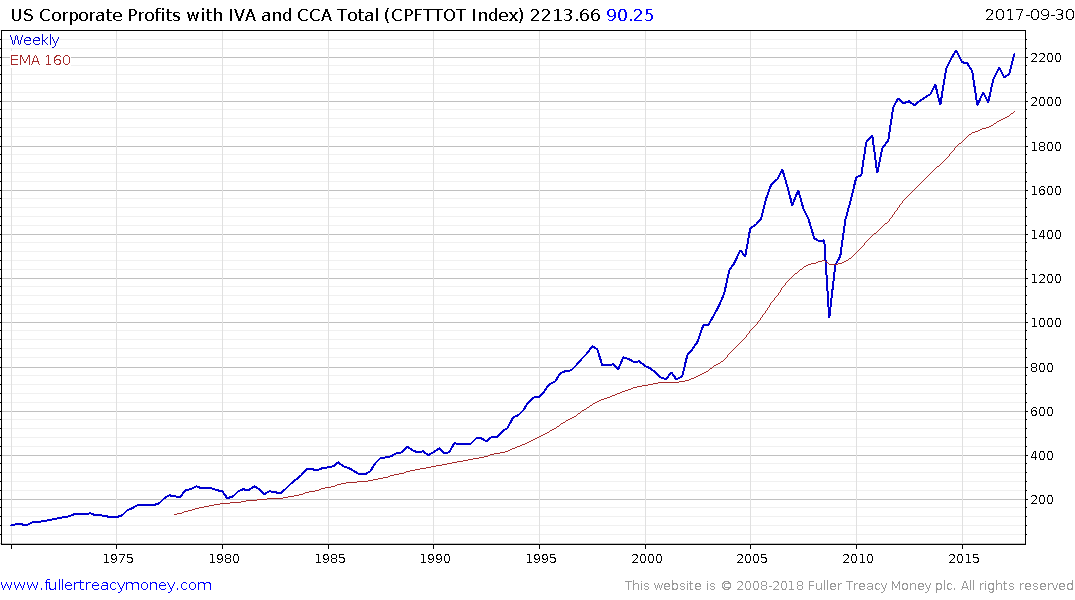 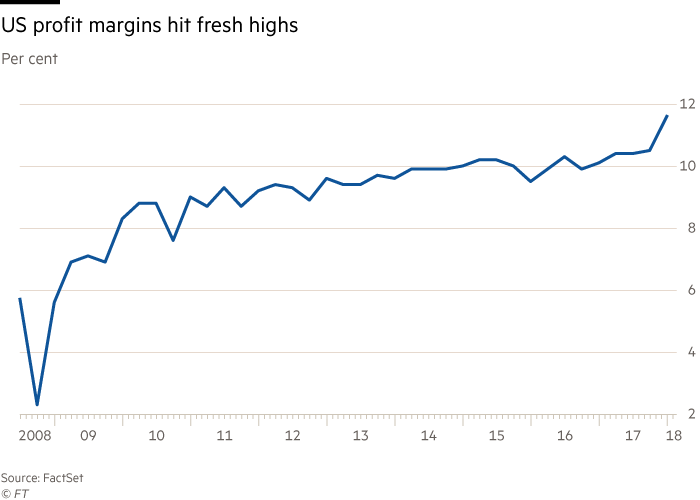 Meanwhile Corporate Profits which were last updated on December 31st for Q4 2017 will probably be at record highs when next updated for Q1 2018. According to this article from the Financial Times Corporate Profit Margins are breaking out.

I fully accept that valuations are high based on the Shiller cyclically adjusted P/E (CAPE) but this is not a timing tool. It tells us we are not early in the cycle but not much more. What is to say that it will not move to a new all-time high before reversing?

The Dow/Gold ratio lends itself to analysis because of its consistency. There is a cycle in how stocks outperformance commodities and vice versa. The Shiller CAPE is liable to experience mean reversion from time to time, but it is not a consistent trend and therefore is a lot harder to draw useful conclusions from in my opinion.

If capitalism trends towards consolidation, then I agree anti-trust is the logical catharsis from feeling of injustice people feel at the dominance of one company over all others. Populism is, at its root, a revolution against the status quo. More than any other factor the status quo is represented by the utter devotion to social democratic policies which have increased the debt load over decades.
In my view there are three potential issues which populist movements in their various forms can target. These are globalization, debt inequality and anti-trust. Of these, the most urgent is Italy’s election of an outright populist government and we can expect much higher yields before the fervour of this movement is tested by the market.