Do you remember how I asked you in June or July about the prospects of Apple reaching $1 trillion capitalisation and you told a story of a US Customs officer asking you in April who, in you view, would reach $1 trillion first, Apple or Amazon?

At that time, it struck me since it looked like a bubble signal, a story in the vein of a classic legend of a Wall Street financier and a shoe cleaning boy, asking the former for investment advice ahead of the market crash in October 1929. Truly, it took another six-months for the market and especially Apple to begin to deflate, and before that both it and Amazon had reached $1 trillion mark. And probably Apple stock isn’t a bubble per se, but since October 3 peak it fell 23.9% while Nasdaq Composite, just 10.8%.

As we all know, it’s almost impossible to catch the ultimate peak or trough in the market, but your customs officer story seems to be another interesting story in behavioural finance and a warning of troubles ahead, isn’t it?

Thank you for this email and, yes, I remember the discussion. Here is a link to Comment of the Day on June 7th. 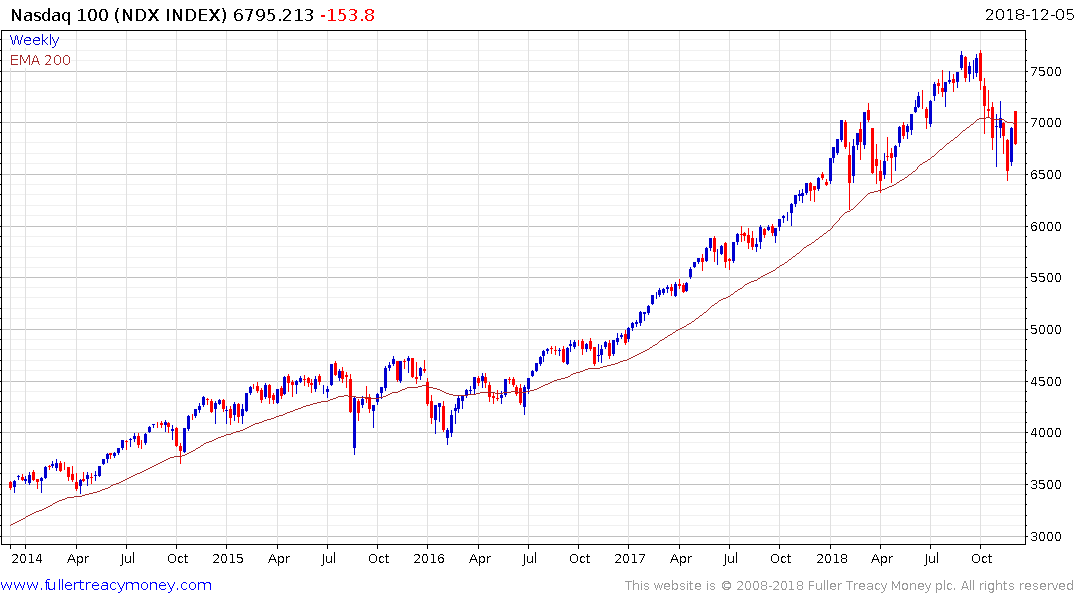 As I mentioned in June, it looks like phone sales are peaking and Apple depends on phone sales. It is also deliberately going slow on the release of 5G phones in much the same way it did with both 4G and 3G and that is likely to represent a drag next year. I agree the fact border patrol people are talking about popular shares is a sign that the market was getting saturated with bulls.

This is not the first time Apple has pulled back in a violent manner and there is no indication yet that the decline is over. The best scenario is prolonged ranging before the uptrend can resume and it certainly accelerated towards its peak. 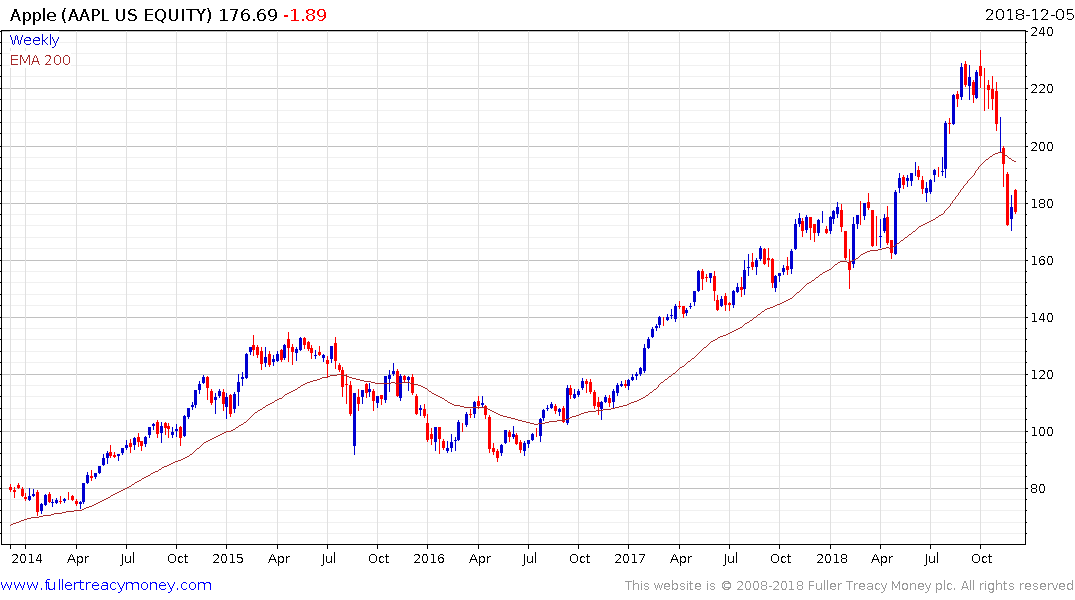 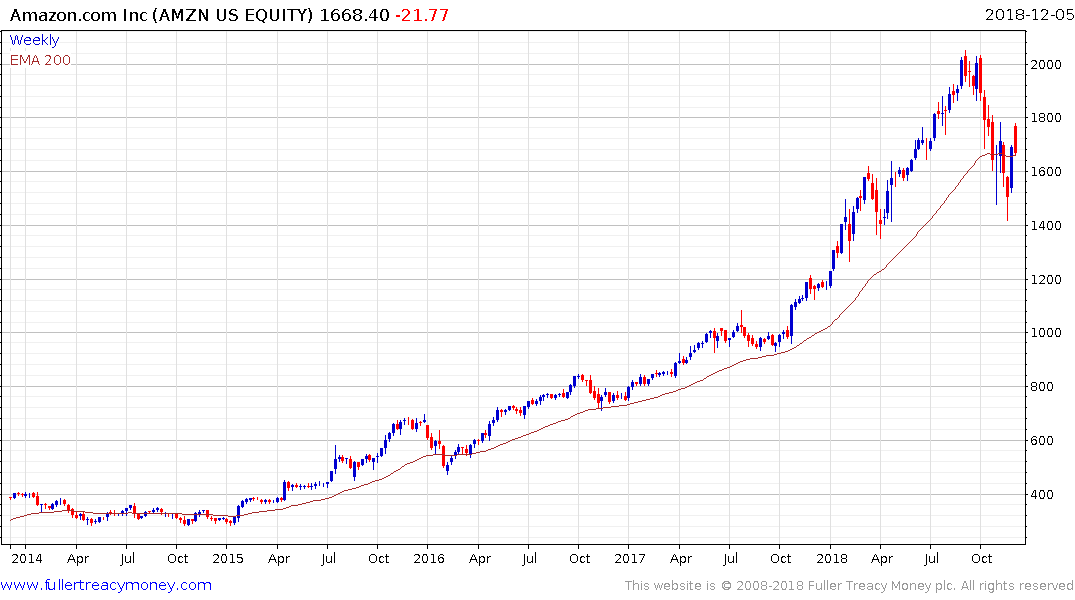 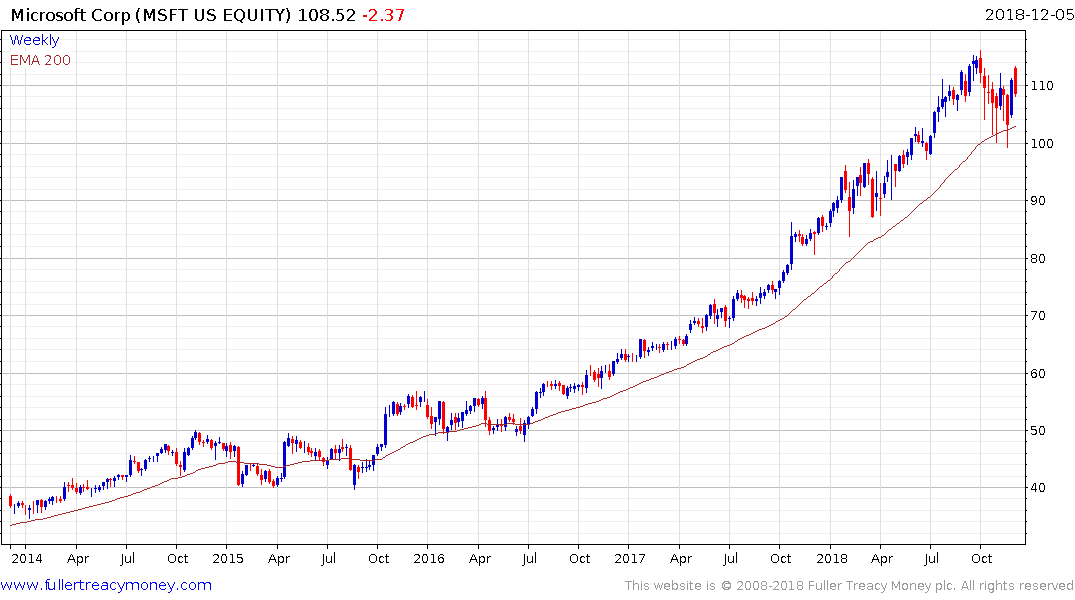 Apple, Microsoft and Amazon represent 32% of the Nasdaq-100 so how they perform is going to have a significant effect on the Index’s performance. It pulled back from the region of the trend mean in a very violent manner yesterday, to hold the two-month sequence of lower rally highs. A sustained move above the 7100 will be required to signal a return to demand dominance. 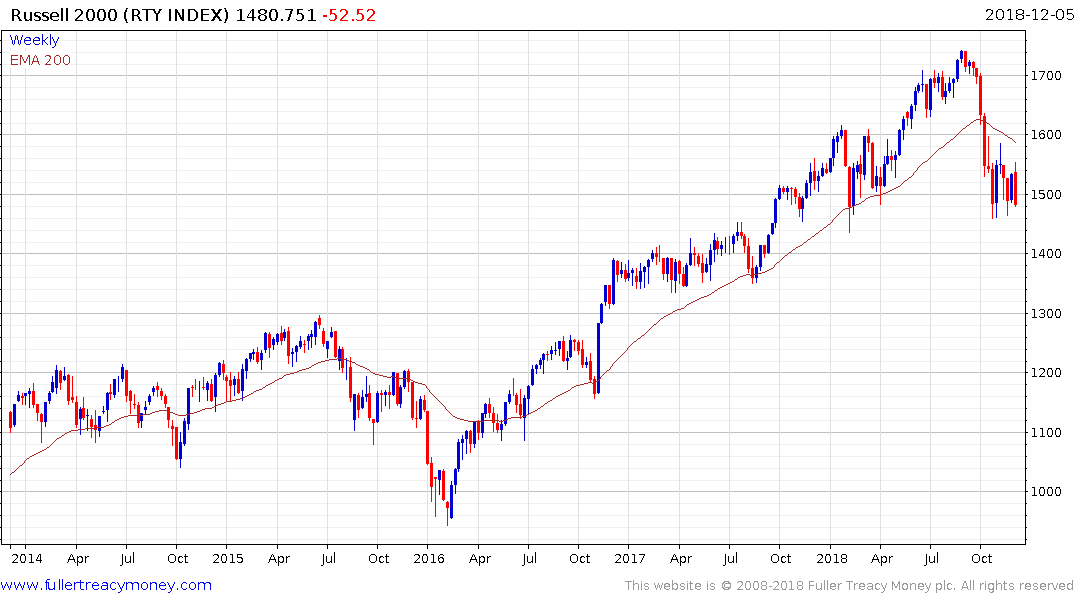 The Russell 2000 has been a clear leader in this downturn and has been distributing below its trend mean over the last month. We are unlikely to have clear evidence this deterioration is over until that Index shows signs of bottoming.

Technology and small caps are interest rates sensitive but I think they are symptomatic of the much more pronounced bubbly activity in the credit markets. There is a substantial risk of a large number of companies with tens of billions in debt being downgraded to junk. Bonds are priced off the CDS and if downgrades increase that will shift the spreads which could cause a feedback loop into the equity. I believe that is what the underperformance of these two sectors is telling us. So, if we are looking for problems, it is in highly indebted companies with declining earnings and impending refinance commitments.