Well done on all the recent market analysis and continuing your thoughtful and insightful analysis as ever. I was wondering if you might be able to provide some thoughts and ideas regarding how to invest is some of the longer-term themes you are running with?

Markets seem to be entering some really interesting phases that you are highlighting, such as the end of QE, coordinated economic expansion which must spell the end of the long-term bond boom that we have seen. Whilst I know you watch and play the markets daily with your futures plays, those of us with non-related "day" jobs need slightly less volatile longer-term ways to play these trends, e.g. perhaps through some ETFs or appropriate equity investments.

Given your knowledge of the markets, I was wondering if you might be able to

2) propose some suggested means to back these ideas. I think the regular summaries help as not all of us have time to listen to your broadcasts or even read the bulletin every day.

Perhaps this could be a weekly update?

Whilst I like your own personal portfolio updates, your trades tend to be futures so need much more regular management than the type of trades myself and I suspect many other readers may feel more comfortable with.

Hope this makes sense and thanks very much for your consideration.

Thank you for this email and reasonable request. Right now, the Big Picture Long-Term video, posted every Friday, is aimed squarely at anyone who does not have the time to read the daily commentary but wishes to gain some perspective on what we think the long-term outlook holds.  Here is a brief summary of my view at present.

I believe we are in a secular bull market that will not peak for at least another decade and potentially twice that. It is being driving by technological innovation especially in the energy and healthcare sectors which have the potential to deliver productivity growth over the long term.

However, we are simultaneously in the later stages of a cyclical bull market that began in late 2008/early 2009. There is increasing evidence of the third psychological perception stage of a bull market which can climax in acceleration.

As you point out interest rates are beginning to rise as the global economy transitions from synchronized monetary expansion to economic expansion. The introduction of deficit spending, dressed up as fiscal stimulus, in the USA has the potential to foment inflation but this is not yet an urgent issue.

We are still in the goldilocks scenario where stock prices are rallying and interest rates do not yet offer enough of a headwind to deter speculation. In between now and after the start of the next recession cyclical sectors should outperform.

Mining, energy, banking and biotechnology all fall into that category because they are all leveraged to global growth and access to liquidity. 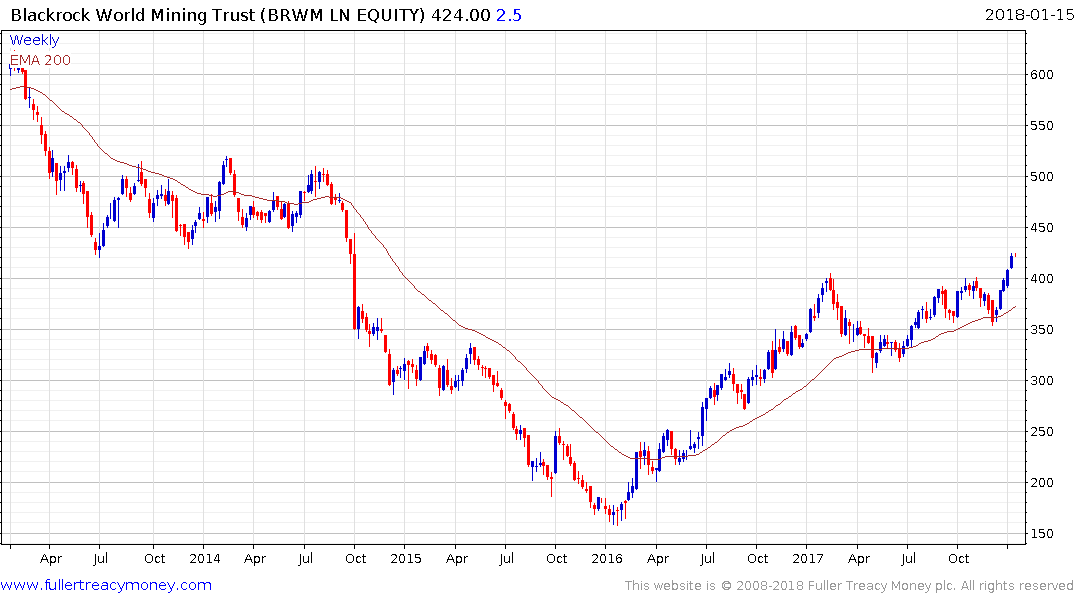 The BlackRock World Mining Trust is still trading at a discount to NAV of 10% and broke out of a yearlong range two weeks ago. 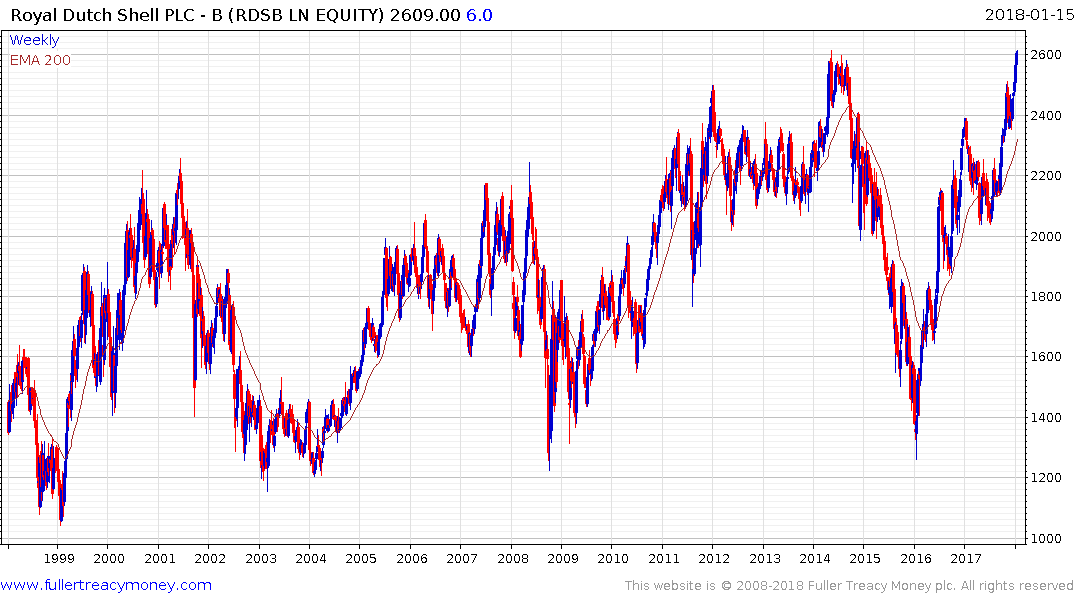 Royal Dutch Shell’s pivot to natural gas production more than a decade ago and increasing focus on that sector continues to pay dividends and the share yields 5.64%. It is now somewhat overextended but a sustained move below the trend mean would be required to question medium-term scope for additional upside. 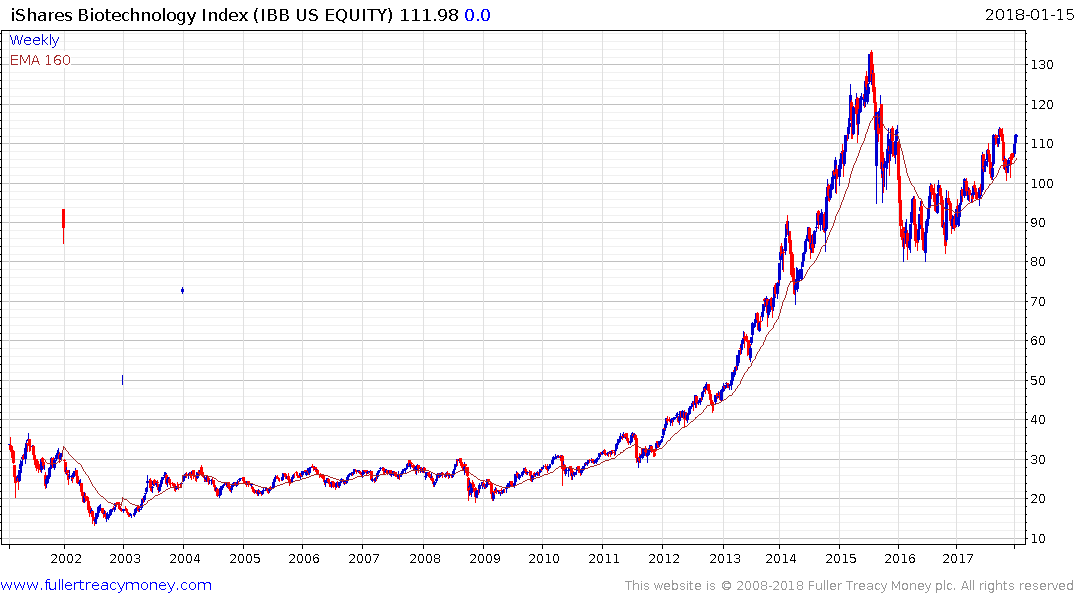 The iShares Biotechnology ETF (IBB or SBIO in the UK) continues to firm from the region of the trend mean. 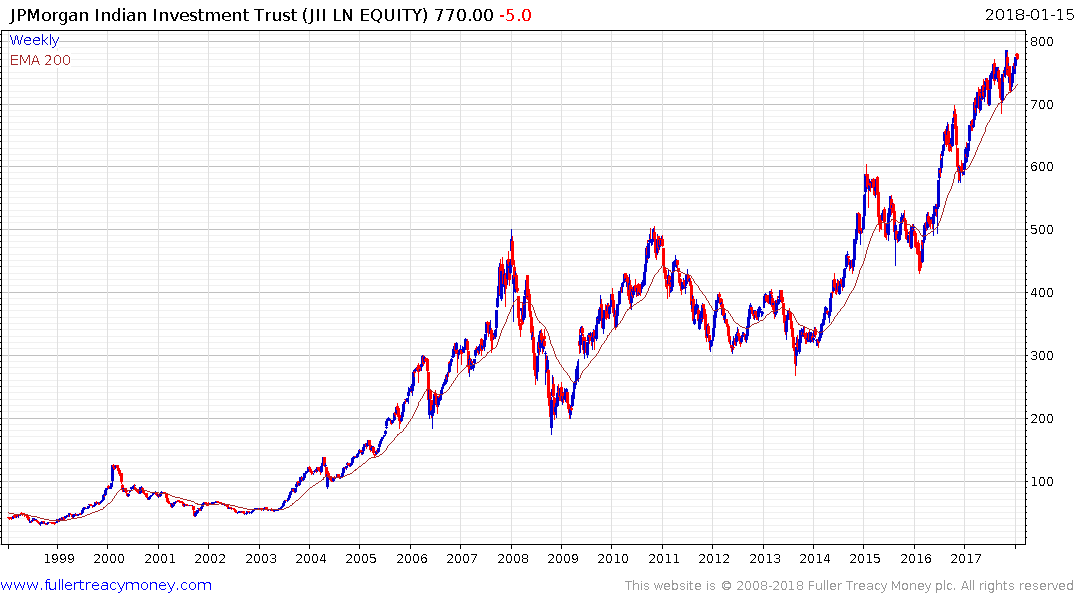 Longer term, India remains one of our favourite markets. The Rupee has stabilized and the rollout of 4G to the whole country, combined with the completion of the nation’s biometric data collection efforts, suggest India is on the cusp of a digital growth phase that could help drive outpaced economic growth for the foreseeable future.

The JPMorgan India Investment Trust trades at a discount to NAV of 14.53% and while it has lost some momentum over the last year the long-term outlook remains positive. 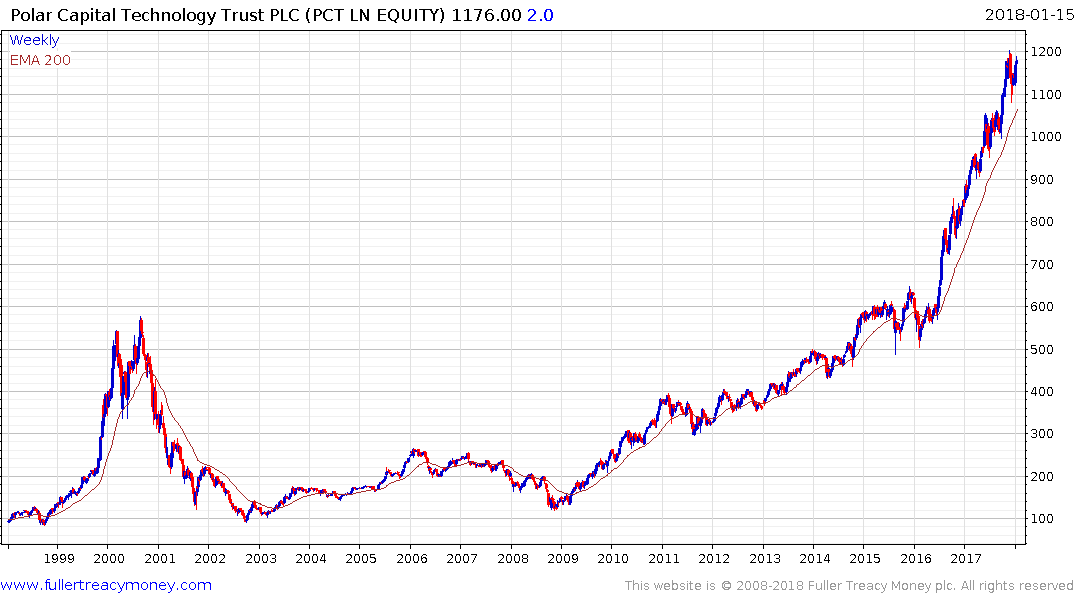 The Polar Technology Trust (PCT UK) trades at a premium of 1.32% so a lot of good news is already priced in. A more suitable entry point would be when it next trades at a discount and has evidence of support building rather than chasing momentum. 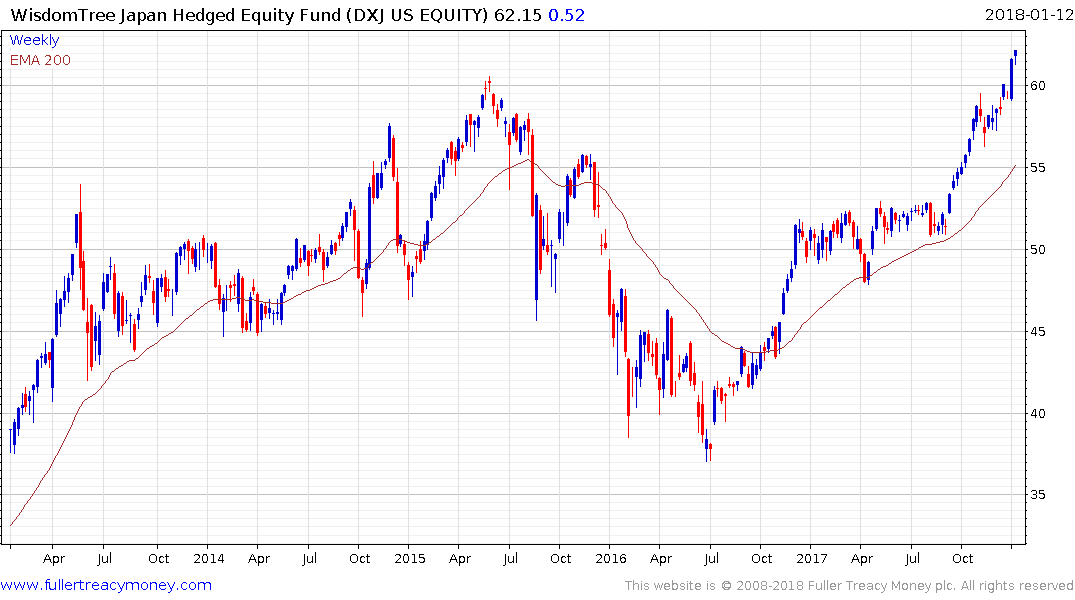 If I am in fact correct that the decades long period of global disinflation is ending then Japan is one of the places most likely to benefit since they have been chasing inflation for so long. That suggests some exposure to Japan in one’s portfolio is highly advisable.

Hedged exposure to the Japanese market is available via the Wisdomtree DXJ ETF in the US, the similar UK fund is IJPH. 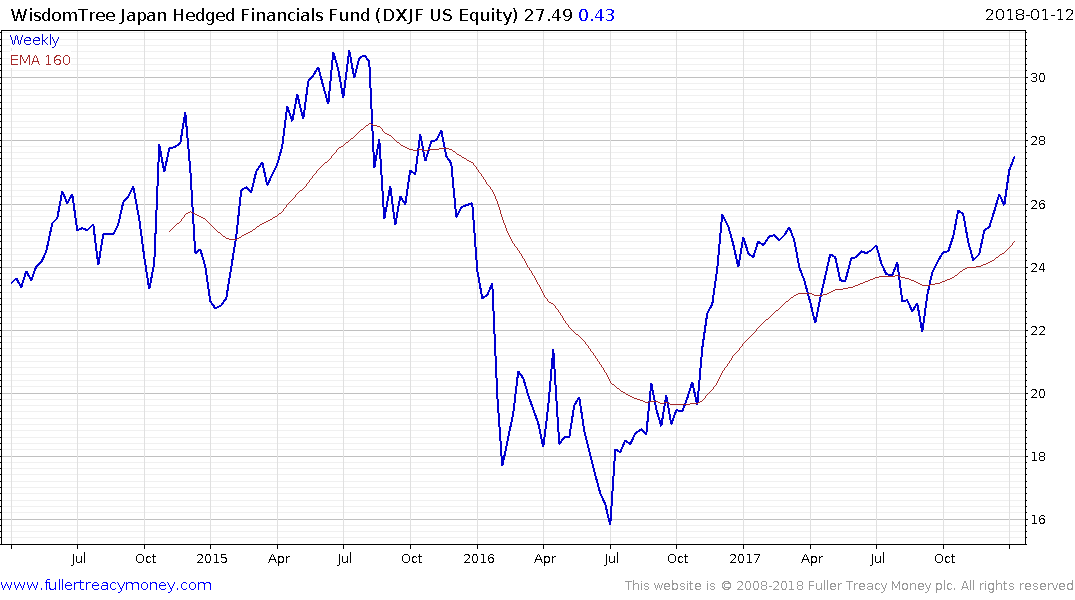 In particular the Banking sector has been depressed but is a high beta play on rising inflationary expectations. DXJF is a US listed US Dollar hedged ETN focusing on the Japanese banking sector. 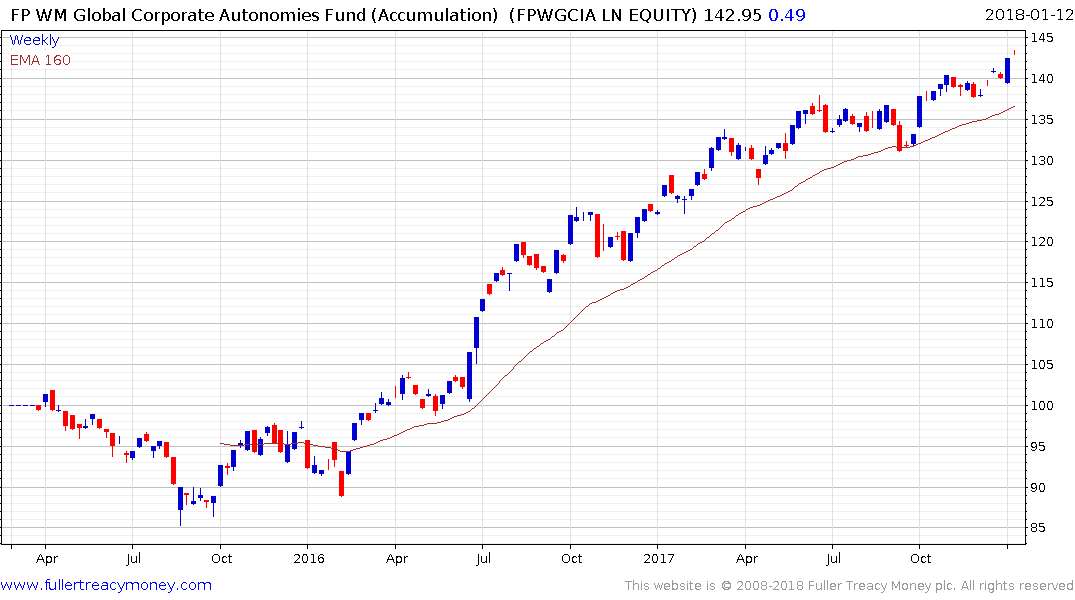 We originated the term Autonomies for globally oriented companies that dominate their respective niches and benefit from the growth of the global consumer, energy revolution and technology innovation. I manage a UK listed OIEC which runs an equal weighted strategy and rebalances once every quarter into the 100 with the most attractive chart patterns and relative performance. It has a management fee of 0.55%. 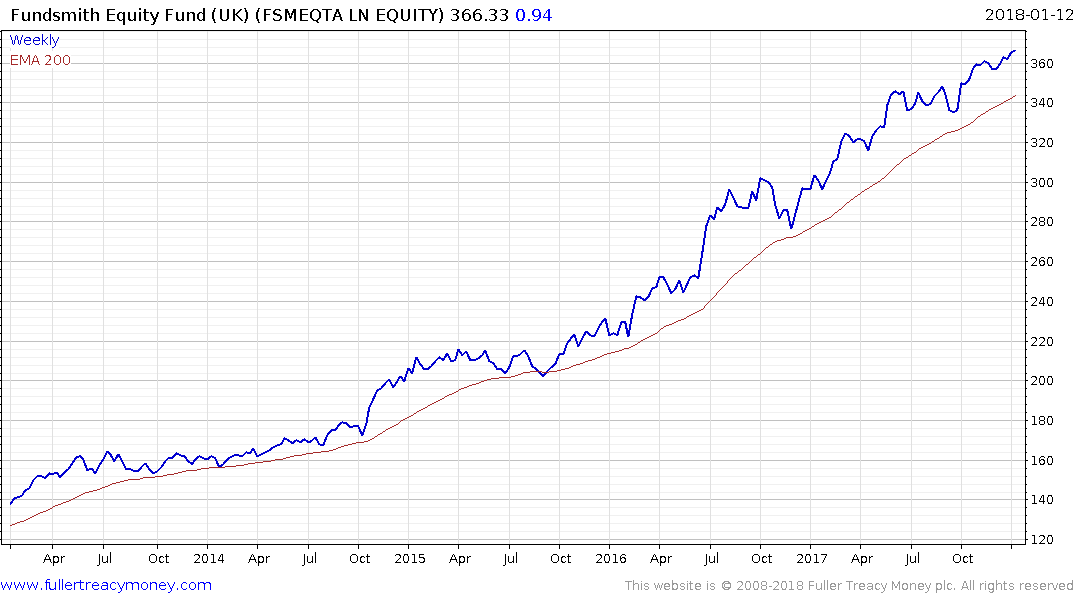 The UK listed Fundsmith Equity Fund also invests in global themes but on a more concentrated basis and charges 1%.