Email of the day on Japan's stimulus program by Eoin Treacy

Hello I read your analysis about the Topix bank index, for the first time I don't really agree with you. The bank of Japan is doing something new and it could push the Topix banks index up. I cannot attach graphs here to this message, but if on Bloomberg you compare the Topix bank index (or any bank index) to the difference in 30 year and 10 year JGB yields the correlation in the last 2 years is almost perfect. I believe they intend targeting yields to keep the curve ripid to help the banks. The same thing will probably happen in the Eurozone as they soften some capital rules as well, so I think the bank indexes should be watched even if only on a relative basis (bank indexes should outperform general indexes like sp500 and DAX and the yield curve become more ripid in Eurozone Japan and US), sorry I can't attach my Bloomberg graph. I hope at the chart seminar in London you can let me understand why you do not consider correlations such as these. They are not long term correlations, but are valid in a zero bound environment.

Thank you for this email highlighting some key measures of how the financial sector has reacted to the Bank of Japan’s stimulus policies. I look forward to covering these topics with you in person in London this November. It’s looking like an interesting group of delegates will be in attendance.

The Japanese first tried massive currency devaluation to try to revitalise economic activity. The result was a boom in nominal equity prices but not the inflation they desired to justify the monetary stimulus. For whatever reason central banks decided that if low interest rates were good then negative rates must be better. The result for Japan was a collapse in the banking sector and a surge in the Yen. The policy announced yesterday would appear to be at least a partial admission that negative rates were a mistake.

I believe this chart from Bloomberg depicting the 30-10yr spread overlaid with the Topix Banks Index represents the correlation you were referring to. 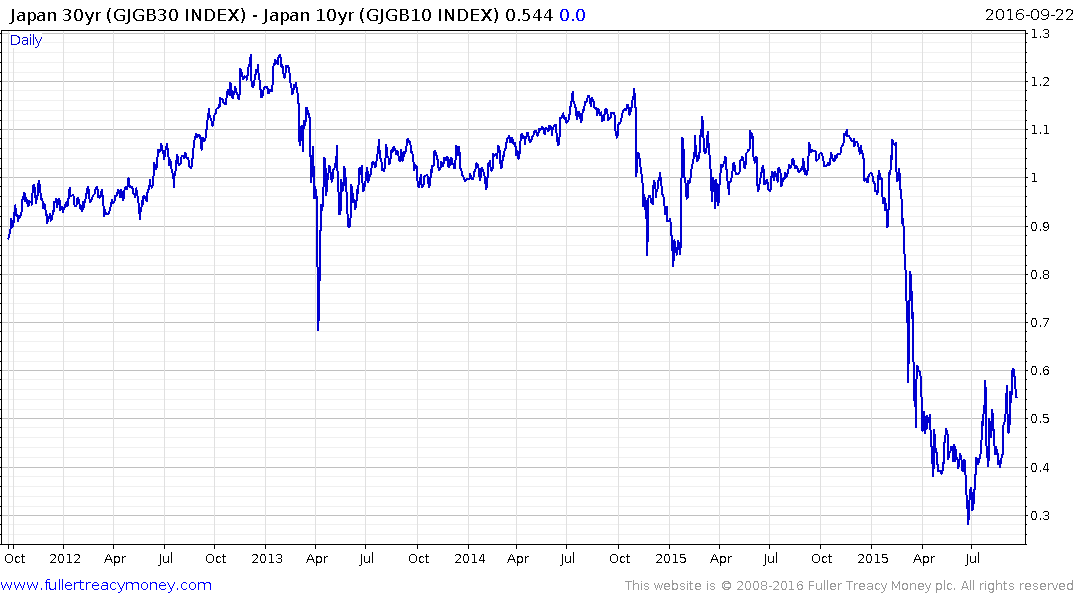 Banks benefit from a steepening yield curve because they can borrow short-term to lend long-term with little risk; allowing them to pick up the spread. The rally in the 30-year yield has resulted in the spread widening by 30 basis points since June so it is now back to where it traded in March. If the BoJ is now going to target a zero yield for the 10-year will they allow the 30-year yield to continue to march higher which would generate the steeper yield curve on which the bullish case for the banking sector rests? Let’s monitor the spread to see if a move to new recovery highs can be sustained before reaching a conclusion.

Medium-term, the government is talking about doubling the already very small number of legal immigrants as well as other reforms aimed to stoking growth. However from a monetary perspective it is hard to imagine that the policy of targeting a zero yield is going to generate the confidence to encourage spending among the wider population. To date rather the opposite has been true. That is why I continue to believe that Japan will probably be the first country to adopt some form of helicopter money but even so that is not likely in the short term.

Since the Bank of Japan owns about a third of all Japanese government bonds and the majority of the remaining balance are held domestically they face less opposition to cancelling debt or monetising it than most other countries. 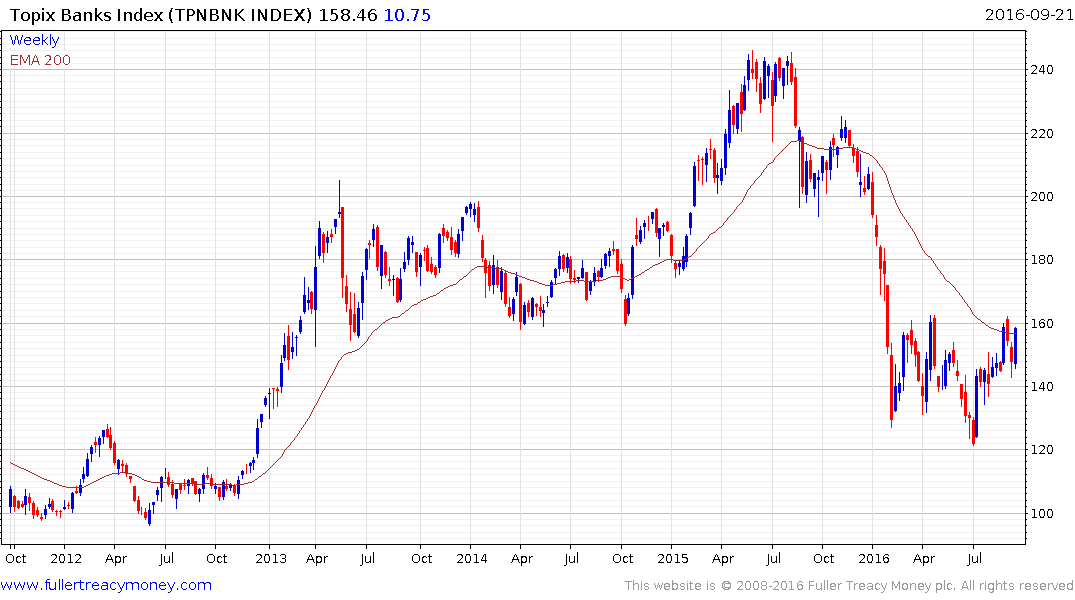 In the meantime the Japanese market was closed today for the Autumnal Equinox Holiday but Nikkei-225 futures are down in the region of 1.4% at the time of writing.

If Japan is going to revitalise the economy it needs to drive internal consumption, boost productivity, and sustain its export oriented market. The strength of the Yen is a headwind to those objectives so in addition to the above spread I believe we also need to monitor the Yen not least because it is trading close to a psychological level represented by ¥100.

I agree the ECB could pursue a similar policy to the Bank of Japan but that is unlikely to offer anything other than a temporary respite for what remains a very challenging environment for the banking sector overall.