Email of the day on evidence of immigration in Japan:
Comment of the Day

Email of the day on evidence of immigration in Japan: by Eoin Treacy

I believe this does rather endorse your view. Also, my father in law a farmer in Shikoku has told me about many Chinese farmers on their Island!

Different subject, but I heard recently pearl exports this year are up in the region of 100%, your wife has obviously started a major new trend!

Thank you for this informative email and interesting article. My wife’s pearl business, my children’s love of anime and mange and my optimism about the recovering economy created a trifecta of reasons for our original trip and return visit in April.

The biggest takeaway for me is the number of foreign workers we have encountered. In one of the world’s few remaining mono cultural societies that was a true surprise. Here is a section from the Nikkei Asian review article:

The demand for construction workers is intensifying before the 2020 Olympics, and Hoang is one of the 274,000 foreign workers in Japan on a government-backed trainee program that has become a back door for foreign unskilled workers who would otherwise not be allowed in. Started in 1993, the program has boomed in recent years -- and is one reason that the number of foreign workers in Japan has nearly quadrupled over the last decade.

Led by an influx of workers from China, Vietnam and the Philippines, Japan is in the midst of a quiet revolution when it comes to immigrant workers. Though the total number of foreign workers in Japan is small compared to the more than 3 million in the U.K. and Germany, it is catching up rapidly -- a remarkable shift for a nation famous for resistance to immigration.

Without fanfare, Prime Minister Shinzo Abe has steadily loosened Japan's once tightly controlled visa policy, resulting in an almost doubling of the number of foreign workers in Japan to 1.28 million over the last five years. In its latest move, Abe's government is expected to create a new class of five-year work permits for unskilled workers in hopes of attracting more than 500,000 new overseas workers by 2025. The new guidelines, to be finalized in June, will ease language requirements for foreign workers in construction, agriculture, elderly care and other sectors that are suffering the most serious labor shortages. It will also be possible for trainees to extend their stay for up to 10 years.

Japan has an aging population, recovering economy and labour shortage. The easy and, more importantly, only practical answer is to boost immigration. That has been the answer in just about every other country and Japan is no different. When push comes to shove, adherence to isolationism bumps up against market realities and the market wins.

Conventional thinking has for years written off Japan’s capacity for change precisely because it has not been open to solving its labour shortage. Importing ambitious, young entrepreneurial people from neighbouring countries represents a clear change to that condition and it is likely to represent just the same kind of economic stimulus that immigration does for every other country. 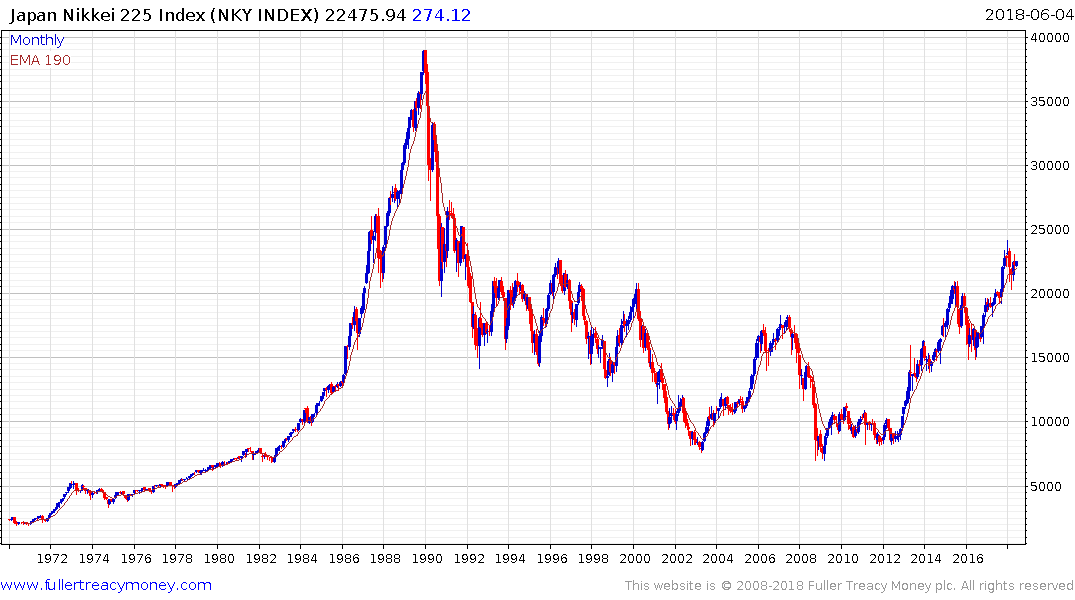 The Nikkei-225 is sustain the break above 20,000 for the first time in decades and the only logical conclusion from that kind of technical action is that a new secular bull market is now in evidence.

The second big takeaway for me was the broker representing pearl farmers we deal with had never before had a client find him via the internet. He does not have a smart phone and communication is fun verging on frustrating. Japan is one of the most technologically savvy countries in the world but there are huge areas of the economy that are completely bereft of the kinds of ecommerce and social media appendages we often take for granted. That represents a massive business opportunity.