Lula, Dilma and the labor party known as Partido Trabalhista PT, ruined Brazil. They robbed state companies and pension funds blind and ruined them. They instituted massive corruption as a means to collect funds in order to stay in power. They used the Development Bank BNDES to finance tin pot dictators in Africa and Latin America so as to be able to siphon off money for the party. PT caused Brazil’s worst recession in history, the highest rate of unemployment ever and a large reduction in GDP per capita. Wide spread corruption in all three branches of government and large scale hiring of public servants for electoral purposes were made a state policy. Public schools and universities were used for ideological purposes. Their quality dropped to astonishing levels, such that students are science ignorant and can neither interpret a text nor think clearly. They are unemployable. Laws were put up for sale. Of 1000 Medidas Provisorias (express approval laws) proposed by PT, 900 correspond to the sale of privileges (exemptions, subsidies, etc) The media was put under control through the tap of state publicity so that PT and sympathizers control TV, newspapers all NGOs and opinion pollsters. PT allied itself with Organized Crime which now controls Rio, is a major threat all over the country and recently tried to murder Bolsonaro. All this has caused a massive revolt, so that the Bolsonaro vote is far more an expression of anti-PT disgust than for the candidate himself. He was the only one to voice matters clearly. By far the least bad choice.

Thank you for this on ground perspective from Sao Paolo. A bull market paves over a lot of cracks in people’s willingness to tolerate declining standards of governance. No one was worried about all of the issues you detail above when commodity prices were surging and there was money for everything. It was only when commodity prices collapsed and funding evaporated that the extent of corruption was revealed. This is about as close to Warren Buffett’s adage “you don’t know who has been swimming naked until the tide goes out”.

Bolsonaro is symptomatic of the wider disillusionment with the status quo which has been a growing trend globally since the credit crisis. If other countries are any guide then we can expect some broad- spectrum changes but time will be required to truly judge how fruitful the reforms will be. Right now, investors are willing to give Bolsonaro the benefit of the doubt because it would difficult to be worse than the current administration. 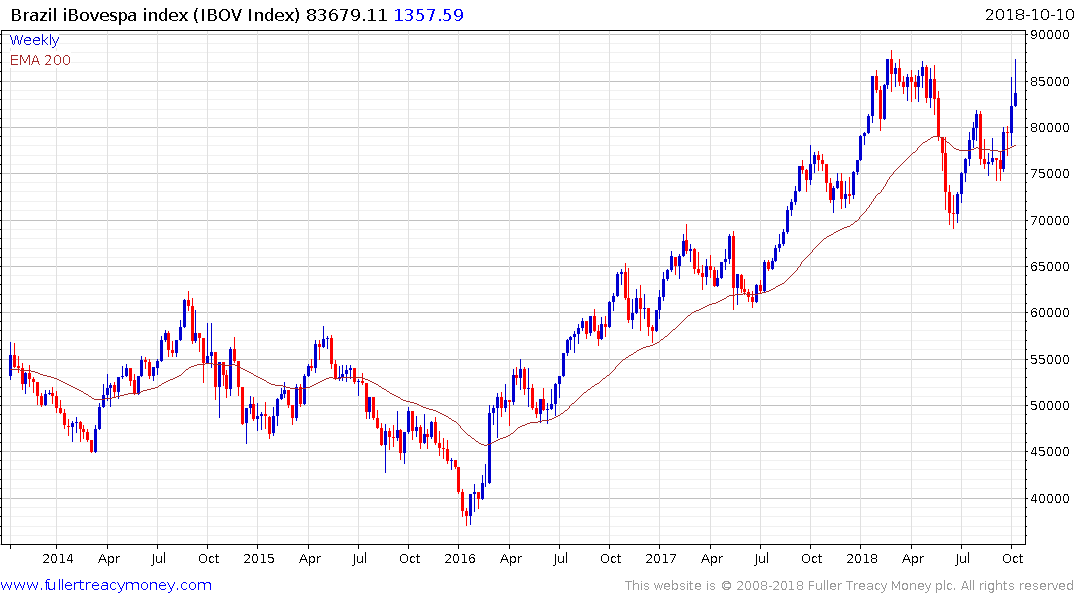 The iBovespa paused in the region of this year’s peak today while the Real remains steady. A sustained move below the 80000 level would be required to question medium-term scope for continued upside.