It is satisfying to see some hedge funds losing because a crowd of ordinary investors are smart enough to play the game against the big guy. Does the GameStop example not suggest there is something wrong with a system that allows more short position to exist than the number of shares the company issued? Why are short positions reported only quarterly in the US? Should there not be an obligation to report short positions above a certain level in real time, at a level much less than the similar obligations for long positions (say 0.5% of the number of shares issued)? Why are short positions allowed at all? The markets are supposed to be places to raise capital, but short positions raise no capital - they are primarily used for financial manipulations that are of no benefit to society.

Thank you for this note and I think a lot of people are engaging in Schadenfreude at the expense of hedge funds. The practice of initiating a short position, then putting out of bearish report has been rife over the last decade. The instigators of this practice typically cover shortly after the initial drop and move onto the next target. It’s a predatory practice and amounts to market manipulation. Putting your put option positions in 13-F filings amounts to the same thing. So, it is high time this form of manipulation was targeted.

Shorting exists because it helps the market function more efficiently. In the competitive world of finance there should be no room for the weak. The reality today is there are legions of zombie companies supported by little more than access to cheap capital. 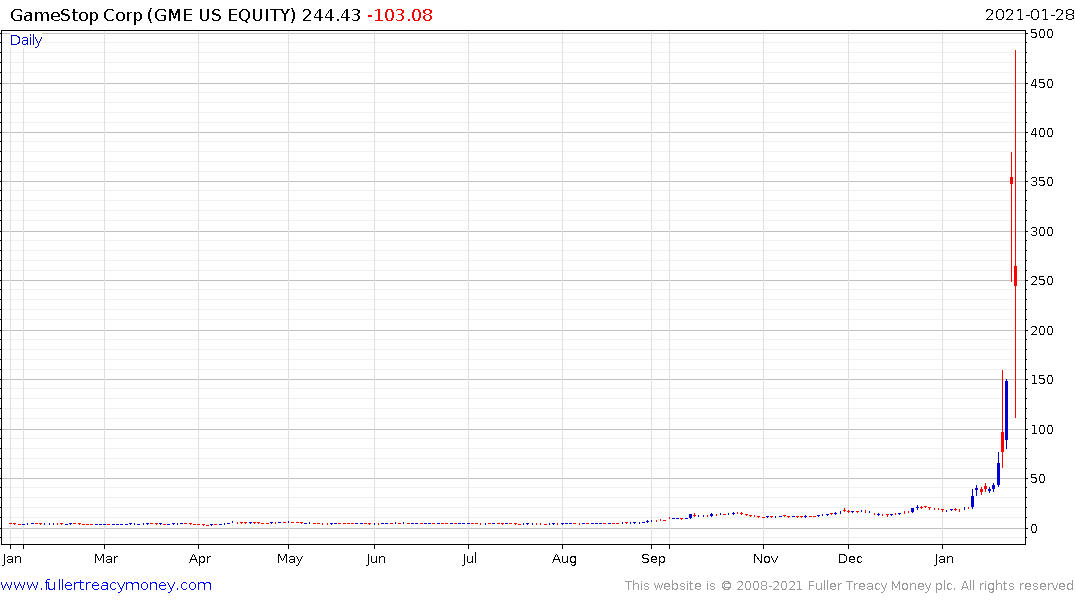 GameStop is one of them. The company completely failed to move online. That’s a particular failing when most of its customers are tech savvy. Keeping stores open all year to answer the questions of a few confused parents at the holidays is not a business model. The only value in the company is its second-hand game trading business.

Massive monetary and fiscal accommodation has resulted in large numbers of companies surviving. In the normal course of events, they would have gone bust long ago. That’s also market manipulation and on a much larger scale than short selling.

The requirement to make hedge fund positions visible was a feature of the regulatory environment after the credit crisis. The Reddit revolution is an unintended consequence of that move. However, it is not sustainable because of the volatility it creates.

The whole question of companies with more short interest than free float comes down to leverage. Short positions are necessarily leveraged because the stock has to be borrowed. The same argument about paper gold and the size of the futures positions has been circulating in precious metals markets for years. The reality is most shorting is part of hedging and risk management. It is an essential tool to manage risk in leveraged portfolios. 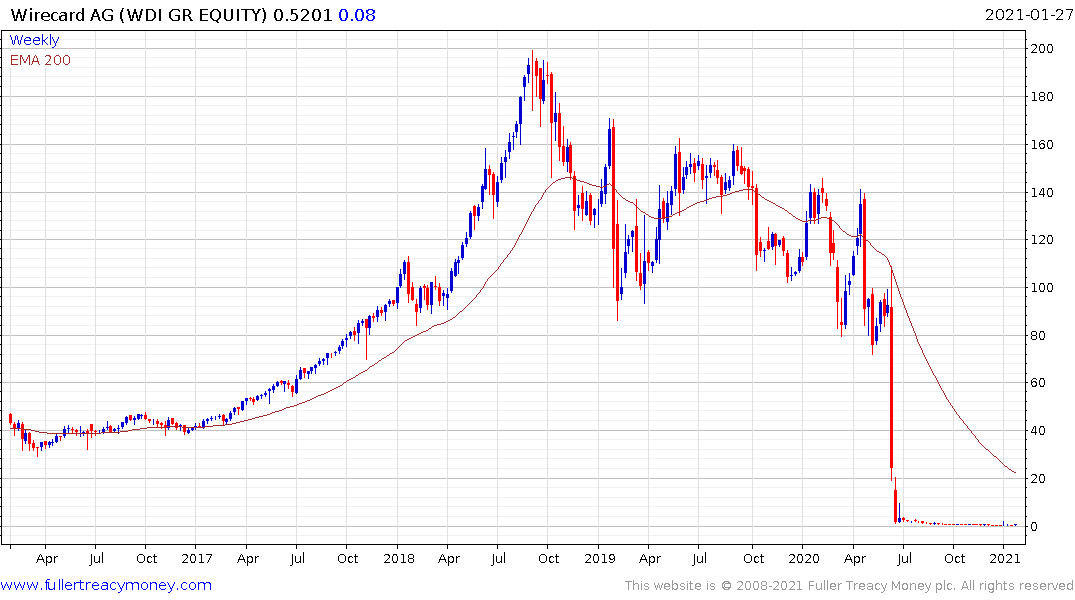 It’s also worth reminding ourselves that short sellers were castigated for accusing Wirecard or fraud. As one of Germany’s most successful start-ups, politicians leapt to its defence and shorting was banned. The claims were true. The CEO has vanished and the stock is now defunct. So, short sellers do provide a useful service.

At present the size of the overall short interest position relative to the wider market is contracting quickly. Traders and investors have got the message. Their positions are being targeted so they are closing them.

News today that brokers like Robinhood, Interactive Brokers and E-Trade are no longer accepting buy orders in GameStop have been labelled as market manipulation on social media. There has been no discussion of how forming investor pools is also market manipulation. A point Louis Gave makes is that forming investor pools is in fact illegal and has been since the Securities Exchange Act of 1934. Here is the relevant section of the law:

“The act likewise makes it unlawful to effect either alone or in concert with others a series of transactions in any registered security, creating actual or apparent active trading in the security or raising or depressing the price thereof, for the purpose of inducing the purchase or sale of the security by others.  This provision should perform the wholesome service of outlawing pool operations”.

There is practically a zero chance of regulators moving to enforce this law but that is also a symptom of the low ebb of financial probity.

The loudest calls to ban short selling occur during bear markets. Has anyone even begun to think about what a crowd of put buyers would do to sentiment if the size of the positions came even remotely close to what we are currently seeing with call buying? That’s when there would be very swift action against investor pools and shorts.

There was some talk of Reddit traders moving into silver this morning. Here is a section from an Bloomberg article.

On Comex, silver’s March options skew, or the measure of what trader will pay for calls minus puts, surged more than 10 percentage points to 14%.

Some think the metal will surge to record levels, options for silver at $100 have traded every day this week, far above the current level in the mid-$20s

As trading shuts down in some equities, the logical migration point for days traders is into commodities. They have the added attraction of being smaller, less liquid, less well regulated and also have short positions to pressure. 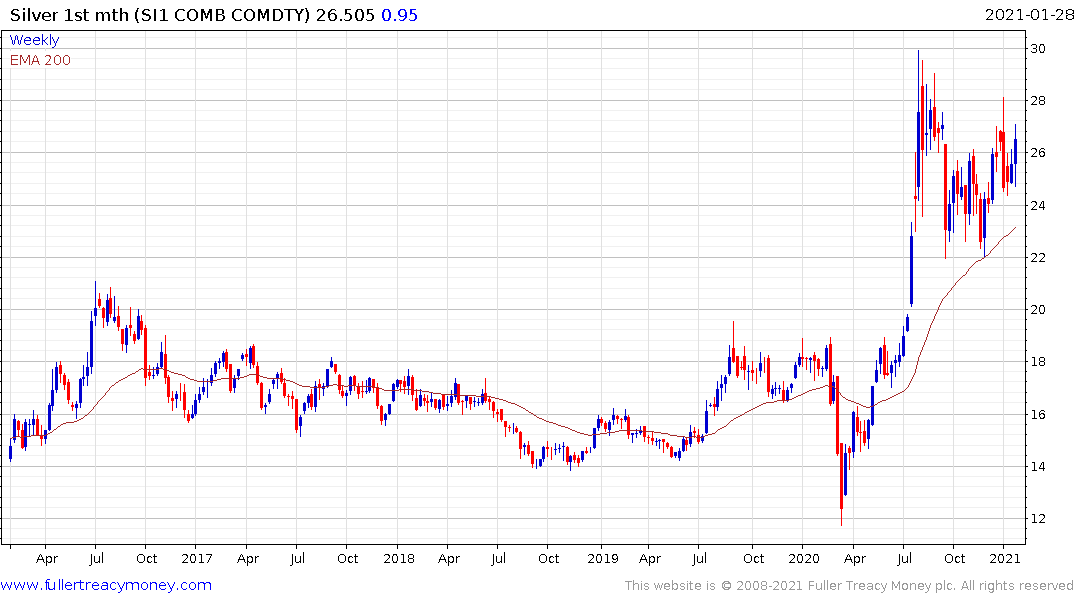 Silver bounced today from the $25 area and continues to outperform gold.