I'm a new subscriber and am massively enjoying the content, in particular your video commentary, thank you. Perhaps it just hasn't been touched on in the last few weeks since I joined but I wanted to ask about your views on Sterling, from the point of view of a UK based investor. I used to be 50/50 allocated, GBP/USD. A few months after Brexit with cable close to 1.20 I figured it was potentially the opportunity of a lifetime to get longer Sterling (in particular given I'm UK based). I changed my balance to 80/20 in favour of Sterling. It took a few years for this to feel like the right decision, but I'm happy I did it. Given my reporting ccy is GBP I don't see a lot of that gain unless I dollarize my returns.

Specifically, I would appreciate your views on: 1. What is your outlook for cable heading into 2021? 2. Do you think that a large part of this trade is potentially continued dollar weakness (USD rarely doing well in risk-on mode)? 3. You mentioned in the 3Feb commentary that most central banks tend to fight appreciation of their own currency. Certainly, that is true for the ECB and the SNB. What about the BOE at present? 4. Given the bulk of my investments are NON-GBP (major US funds, Japan, China, Global) what strategy would you suggest for accessing these sectors if one wanted to keep a sterling bias?

Thank you for these questions and I am delighted you are enjoying the service. Since you are a new subscriber you might not be aware, I do a long-term review of assets and themes on the first Friday of every month. My aim is to ensure there is a predictable timetable for when long-term investment themes are covered in the written commentary outside of the weekly Big Picture audios/videos.
Here is a link to the last one and the next one will be tomorrow.

The Bank of England has been more activist in devaluing the Pound, during crises than just about any other major central bank. During the Global Financial Crisis, the Pound took much of the pressure from the collapse of the financial system and the Pound collapsed again following the Brexit referendum. In between crises, it tends to be reasonably steady.

The UK is now plotting a course outside the EU. The government is under pressure to demonstrate how much better life is going to be now that the country is freer from extraterritorial rule making. A streamlined tariff and permitting structure has yet to materialise but we are still in early days.

Of course, this conversation is taking place during the pandemic lockdowns where investors are looking at relative success in the inoculation process. In that regard the UK is well ahead of the pack with millions of people already vaccinated. It is estimated the UK will be the first country in Europe to achieve herd immunity and that could happen this year. That’s a significant boon for the economy relative to most large countries and supports the view the UK economy will bounce back sooner than regional competitors.

As the point of herd immunity is approached, emphasis will turn back towards “building back better”. The escalating estimates of costs to retrofit council housing following the Grenfell Tower scandal alone highlights how much money will be required. 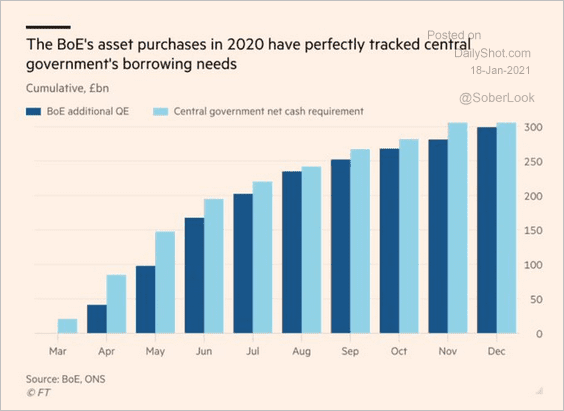 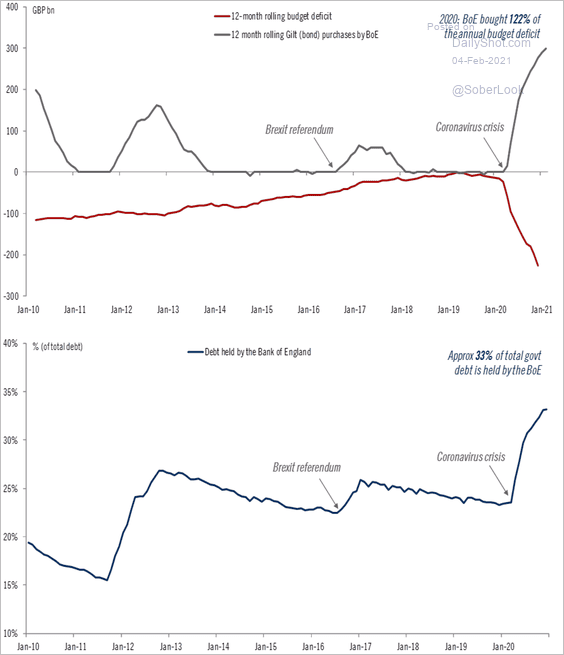 In 2020, the Bank of England’s asset purchases tracked the government’s spending so we have clear evidence of Modern Monetary Theory in action. The central bank now owns about a third of all Gilts. The only way that is going to be unwound is through raising taxes, a lot, and that’s political suicide.

Every other country is in the same situation which is why I believe we are in an era of competitive currency devaluation. The appreciation of real assets like property, stocks and commodities is a reflection of that trend. 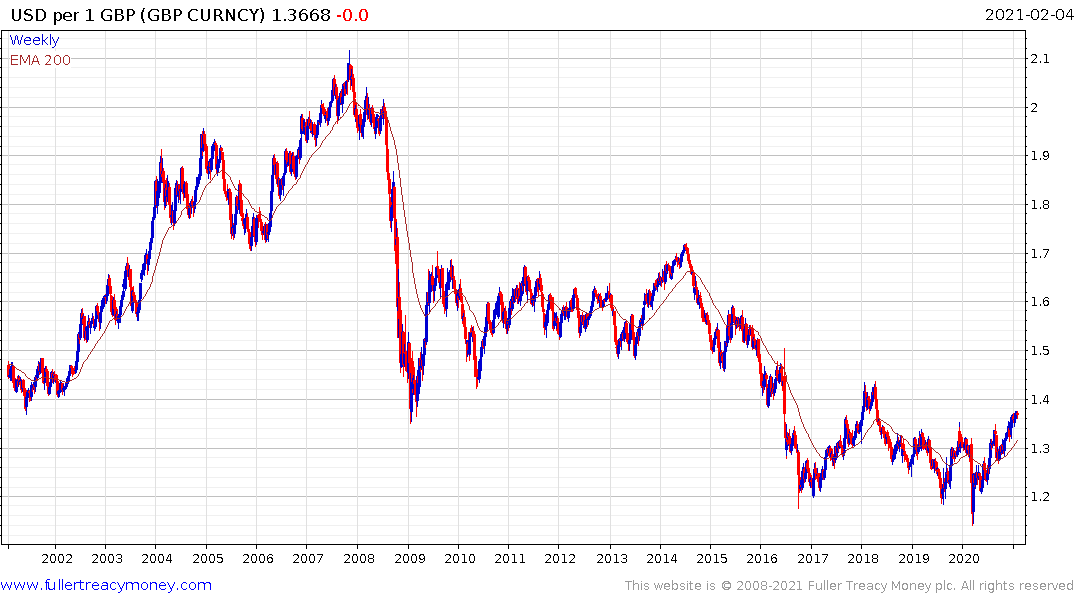 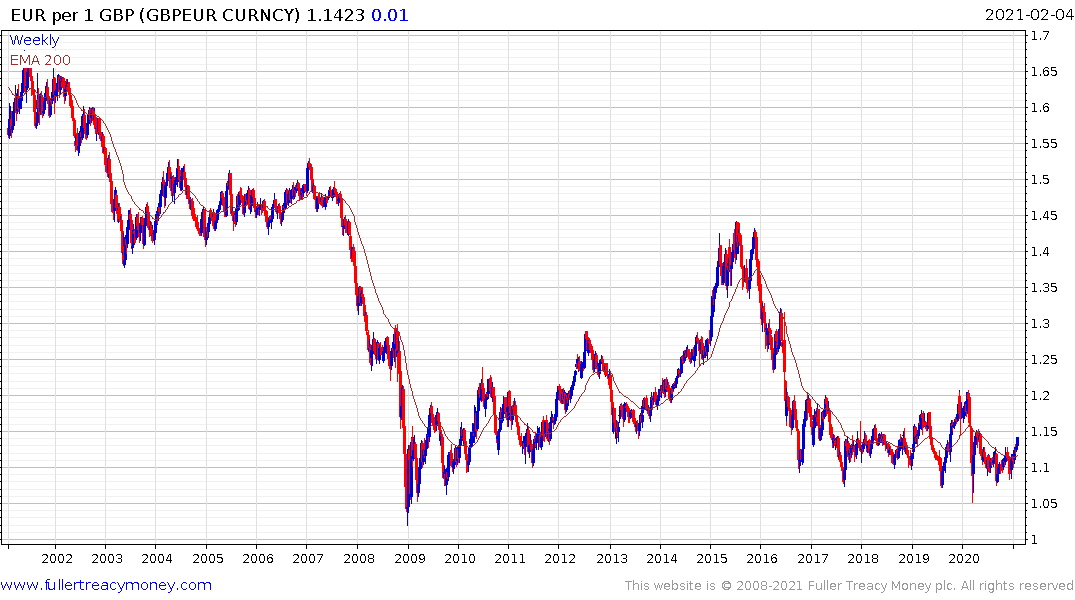 To date the Bank of England has been quiet about the strength of the Pound. However, as it trends back towards $1.40 and €1.20 respectively, it would not be surprising to see some efforts to talk it down. They have already told banks to prepare for negative interest rates, while being clear to state it is not a signal for future policy. That’s the beginning of efforts to retard the pace of the Pound’s appreciation and particularly against the Euro as it comes back to test the upper side of the base formation.

Taking these factors into consideration I expect the Pound to hold its own, but the Bank of England is not about to allow it to appreciate in a conspicuous fashion. If Brexit was fundamentally about competing effectively internationally, then a weaker currency is necessary to kick start that process.

From an international investor’s perspective, the UK has more choices to invest globally than just about anywhere else. The Aberdeen New India Investment Trust, Atlantis Japan Growth Fund, Polar Capital Technology Trust and JPMorgan China Growth & Income Investment Trust are all denominated in Pounds and have historically been the better performers in their classes. They are of course best bought following pullbacks.