Don't Trade a Bear Like a Bull; Reality Check for Earnings is Good
Comment of the Day

Don't Trade a Bear Like a Bull; Reality Check for Earnings is Good by Eoin Treacy

Over the past several months, it's become apparent even to the casual observer that the US equity market is acting differently. First and foremost, the trend is broken with the 200-day moving average for the S&P 500 and other major averages now turned down, a rare event over the past 80 years (see section below). We believe our Rolling Bear market thesis has now run its course in terms of valuation de-rating (18 percent from peak to trough for the S&P 500), leaving no sector or stock unscathed at this point. More than 40 percent of the stocks in the S&P 500 have seen a 20 percent decline in price from peak to trough. Meanwhile, the S&P 500 Index is still up on the year and has only experienced a 12 percent drawdown at its worst moment. To us, that fits the definition of our Rolling Bear market narrative and we think it's probably close to completion in terms of its raw damage.

The other thing worth noting is that it also trades like a bear market. As our Quantitative Derivatives Strategies colleagues recently illustrated, a buy-the-dip strategy has not worked this year, the first time since 2002 (Exhibit 1). Even during the crisis period of 2008-09, buying the dip worked. So what's changed? Quantitative easing has turned to quantitative tightening with the Fed now reducing its balance sheet and the ECB and BOJ tapering their QE programs (Exhibit 2). While there may be other factors, we think this is the primary one that has left investors wondering why even companies that report good news are seeing their stocks sell off. In our view, when stocks sell off on good news, that's a bear market.

What's notable about Exhibit 1 is the fact that the only years the Buy the Dip hasn't worked was during bear markets, or the beginning of one (1982, 1990, 2000, 2002). In the cases of 1982, 1990, and 2002 it was also accompanied by a recession. In the case of 2000, it was the year preceding a bear market and recession and the topping of the TMT bubble. In other words, while 2018 is clearly not a year of recession, the market is speaking loudly that bad news is coming. Our view is that the market is sniffing out an earnings recession and a sharp deceleration in economic growth--something we have written about extensively.

Perhaps the biggest question is how in the world did buying the dip work in 2008-09? Recall that in 2008-09, the Fed was easing aggressively and began its QE program along with TARP. That's a lot of stimulus that probably offset the very real concerns about the economy and corporate earnings. Furthermore, while the S&P 500 was down in both 2008 and 2009, buying the market on weakness was still a profitable strategy because the rallies were just as vicious given the incredible uncertainty and unprecedented volatility which also made it almost impossible to execute. This year has been different because monetary stimulus is being removed in a much more deliberate way than we have seen since 2004 and fiscal stimulus has peaked. The bottom line for us is that until we see buying the dip rewarded or earnings for next year reduced to a level that is achievable, we recommend trading like it's a bear market rather than a bull.

At the same time, as we wrote two weeks ago and noted above, we think most of the valuation damage is done at this point from the Rolling Bear market. Now, we must wait for the earnings cuts which will dictate how much more downside is to come. Obviously the bigger the cuts, the bigger the risk at both the index and stock level. Our suspicion is that the bigger cuts are still likely to come in areas that are least expected-i.e. growth stocks perceived to be non/less cyclical than they really are. This would be the growth cyclicals. Nvidia's surprisingly large miss last week and stock reaction should remind investors just how bad it can still be at the stock level

Leverage is quickly being squeezed out of the “new economy” shares which were among the best performers over the last 18 months. That is certainly going to lead to earnings revisions for the companies like Nvidia, Align Technologies and Netflix. 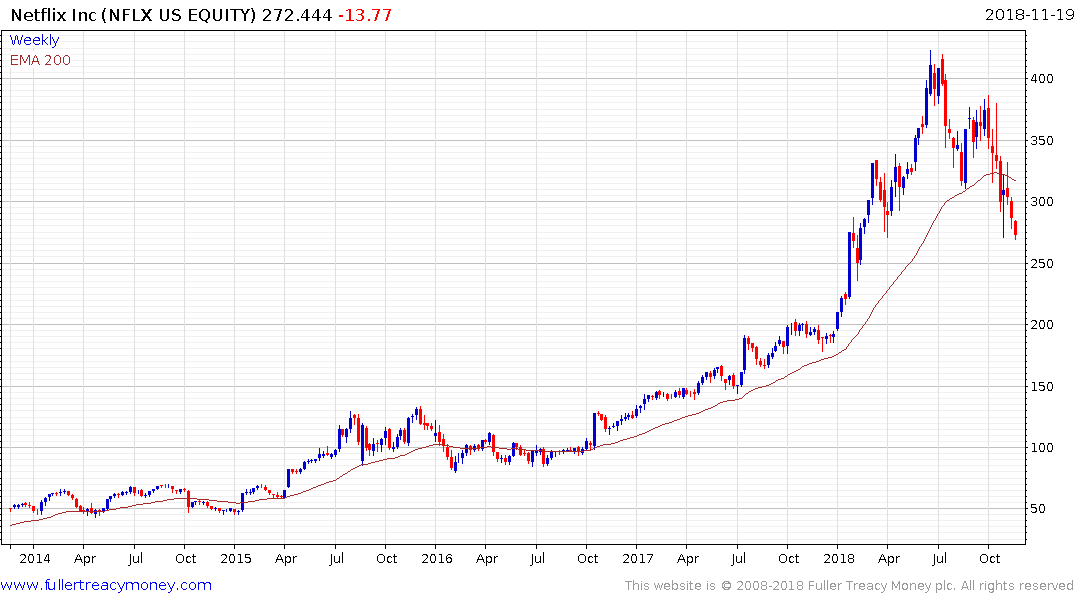 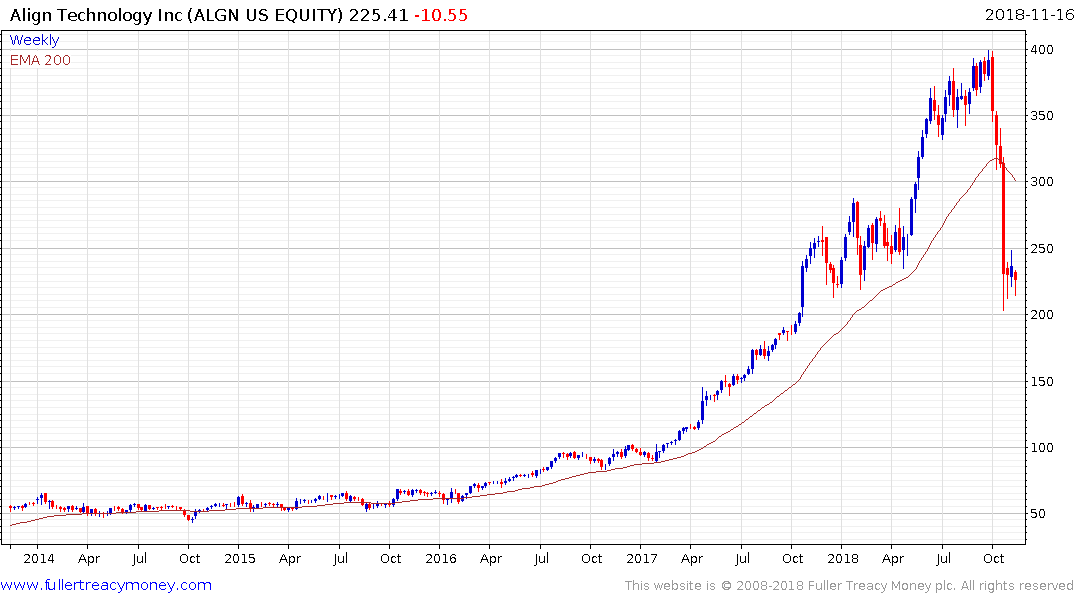 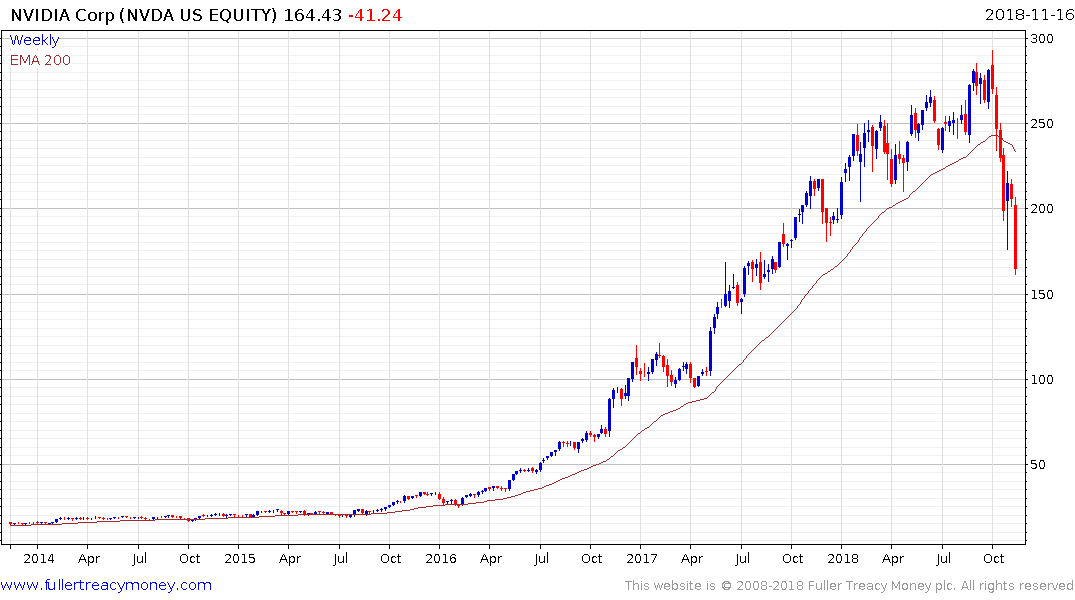 It also holds out the prospect of a lengthier period of underperformance for the segment of the technology sector which has been most aggressively bought by investors over the last few years.

Meanwhile the outperformance of highly defensive sectors points to a rotation out of highly interest rate sensitive sectors.

This spreadsheet of the Nasdaq-100’s constituents ranked by their overextension relative to the trend mean highlights how focused selling pressure has been on the tech and semiconductors sector while consumer sectors are outperforming.

From a broader perspective the Federal Reserve’s balance sheet reduction program coincides with the expiry of bonds held on its account which occurs on the 15th and 30th of the month. There is evidence of the market falling into those days and rallying subsequently. Therefore, it is worth considering that there was a major expiry on Thursday and the market rallied immediately afterwards. Outside of the most heavily leveraged sectors, a lot of selling pressure has already taken place and a short-term oversold condition is evident.