DBS, Bank of Singapore among top 10 private banks in Asia
Comment of the Day

DBS, Bank of Singapore among top 10 private banks in Asia by Eoin Treacy

Private Banker International (PBI) said on Friday (Oct 17) that DBS Private Bank kept its ninth place in the ranking of wealth managers for the rich, with assets under management (AUM) of US$54 billion (S$68.7 billion) as at December 2013, up from US$46 billion the year before.
Bank of Singapore, the private banking arm of Oversea-Chinese Banking Corp (OCBC), stayed at number 10, with AUM of US$46 billion at the end of 2013, an increase from US$43 billion at end-2012.

Looking ahead, Bank of Singapore said it expects to see further growth. Said its chief executive officer Mr Renato de Guzman: "We now have more than 300 relationship managers and we think there is more room for them to grow their asset base.

“So organically we have within the organisation room to grow from existing resources that we have. Secondly, part of our strategy is to really work closely with OCBC, and they are very successful in areas or countries with a strong presence. The recent acquisition of Wing Hang Bank with OCBC is a big opportunity for Bank of Singapore."

At the Singapore venue for The Chart Seminar earlier this year, the majority of attendees were private bankers which was a departure from the event we held in Singapore during 2012. The growth of the sector in the city state reflects concerted long-term policy initiatives to grow the business and this is unlikely to change as the region’s major population centres increasingly seek private banking services. The opening up of China’s capital market and the increasing ability of capital to leave the country should be net benefits for the private banking sector. 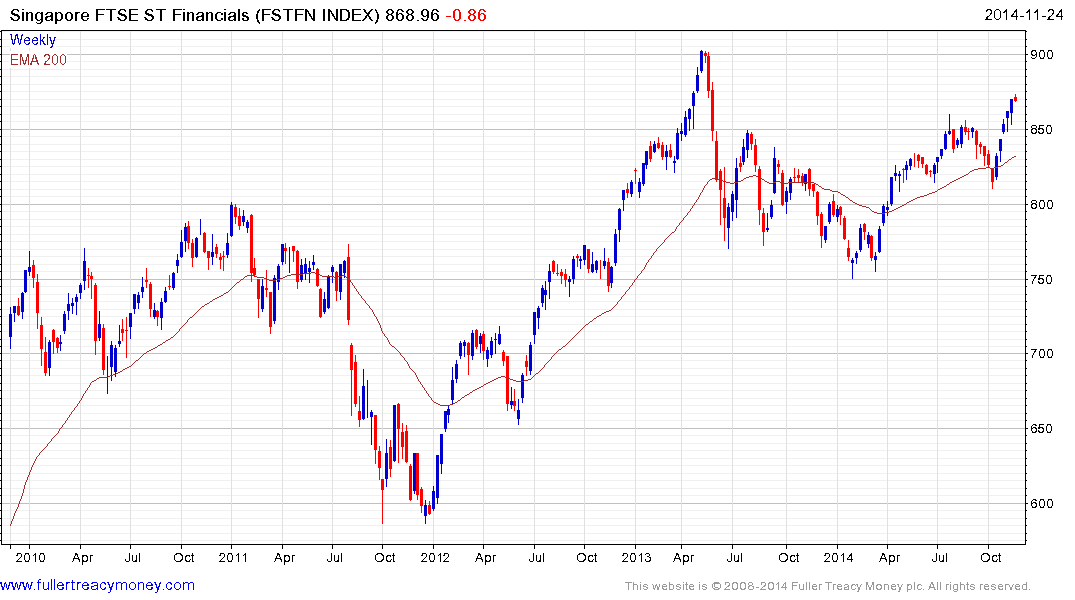 The Singapore Financials Index (P/E 11.38, DY 3.6%) is comprised of banks, the stock exchange, real estate developers and REITs. As such it is not the best reflection of the specific health of the banking sector and has performed more or less in line with the wider market not least because of the substantial market caps of some of its constituents. 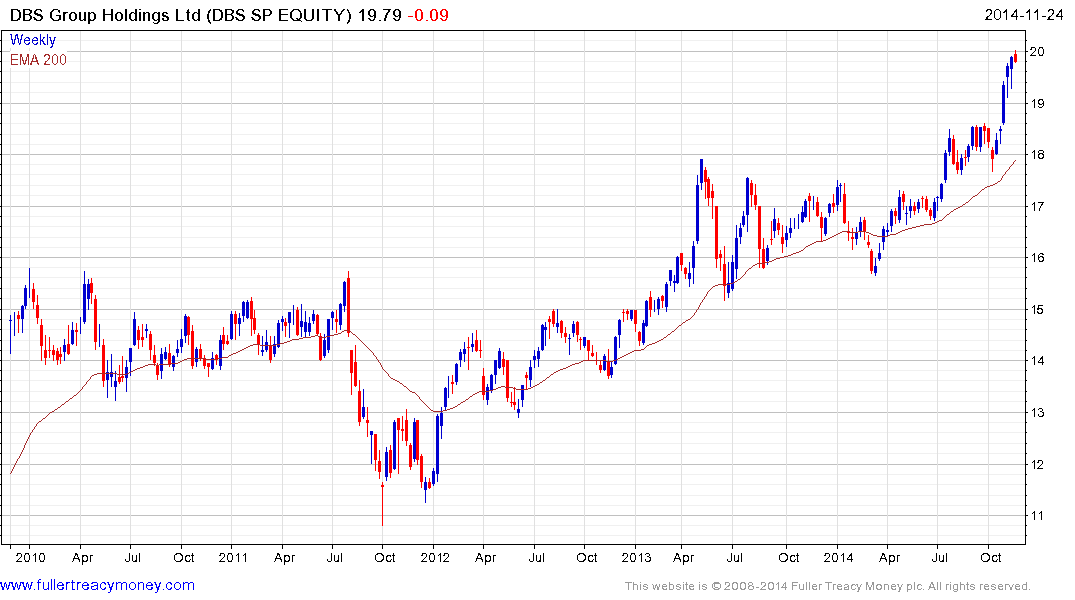 The three largest banks are outperforming both the sector and the wider market. DBS (Est P/E 12.23, DY 2.93%) has rallied impressively over the last six weeks and developed a short-term overbought condition in the process. Some consolidation of recent gains is looking increasingly likely but a sustained move below the 200-day MA, currently near S$18, would be required to question medium-term scope for additional upside. 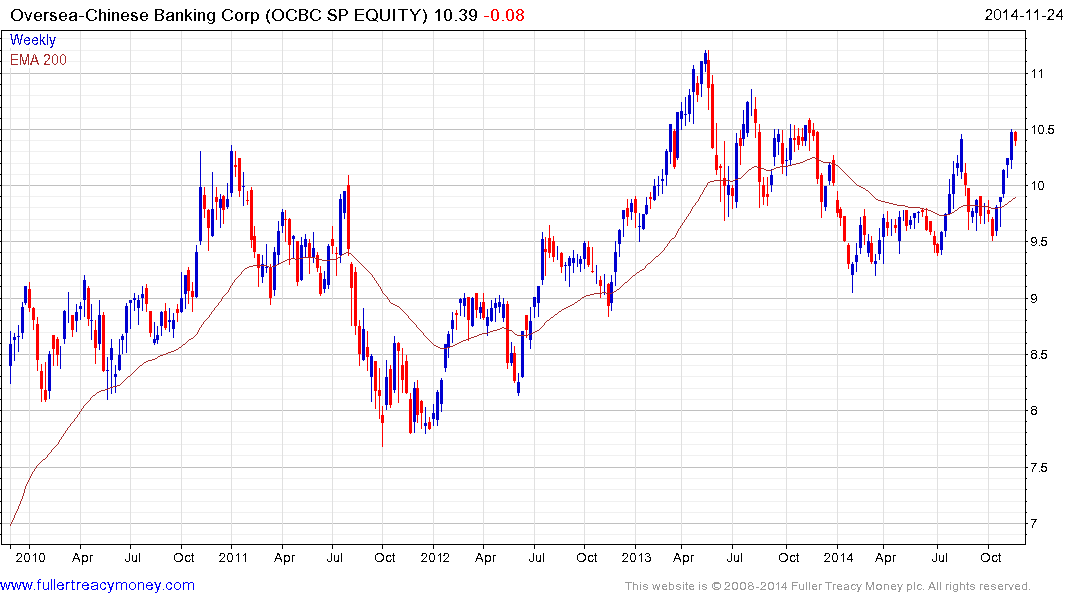 OCBC (Est P/E 11.08, DY 3.27%) rallied to break a yearlong progression of lower rally highs by August, found support in the region of the 200-day MA from October and a sustained move below it would be required to question medium-term upside potential. 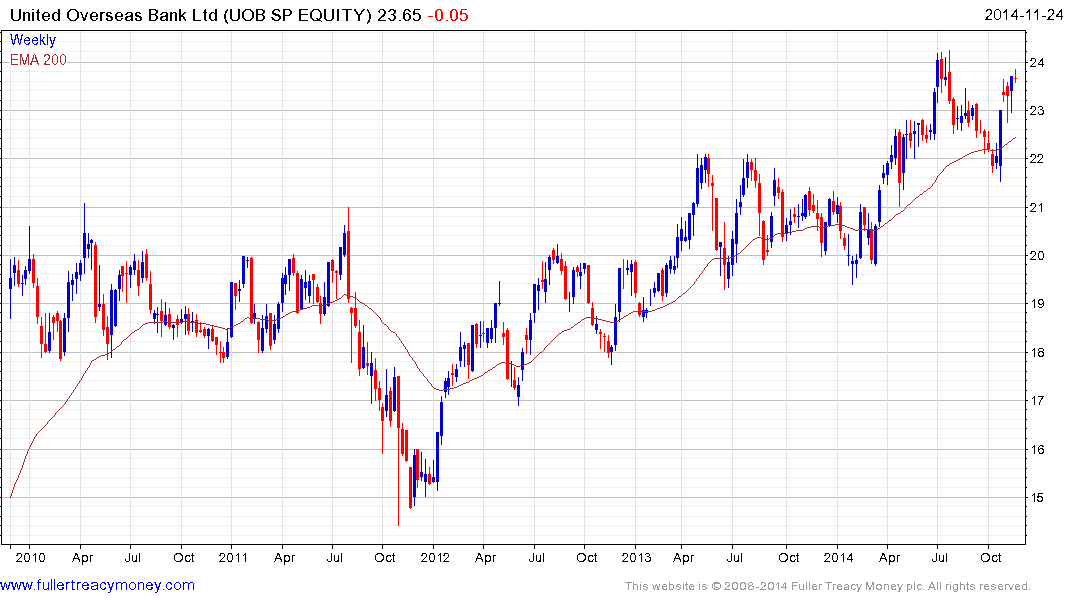 UOB (Est P/E 12.08, DY 2.96%) has held a progression of higher reaction lows since 2011 and posted a large upside weekly key reversal from the region of the 200-day MA and the psychological S$22 area four weeks ago. A sustained move below that level would be required to question medium-term scope for additional upside.